I stay at IHG Hotels from time to time when I need an inexpensive option in a small city, or even at times when I am looking for a mid-range points option in a larger city. The stays are generally perfectly adequate, but not necessarily high end or luxurious. It is a program I generally consider as function over form. In other words, if I’m daydreaming about a hotel (and I’ll admit I sometimes do), it’s not likely to be an IHG Hotel in my dreams.  This isn’t a bad thing since not all trips need to be luxurious by any means.  However, I just completed a stay at an IHG hotel that was more than just a place to lay my head at night. It was a hotel I really liked, enjoyed, and didn’t want to leave – the Intercontinental Times Square in New York City. 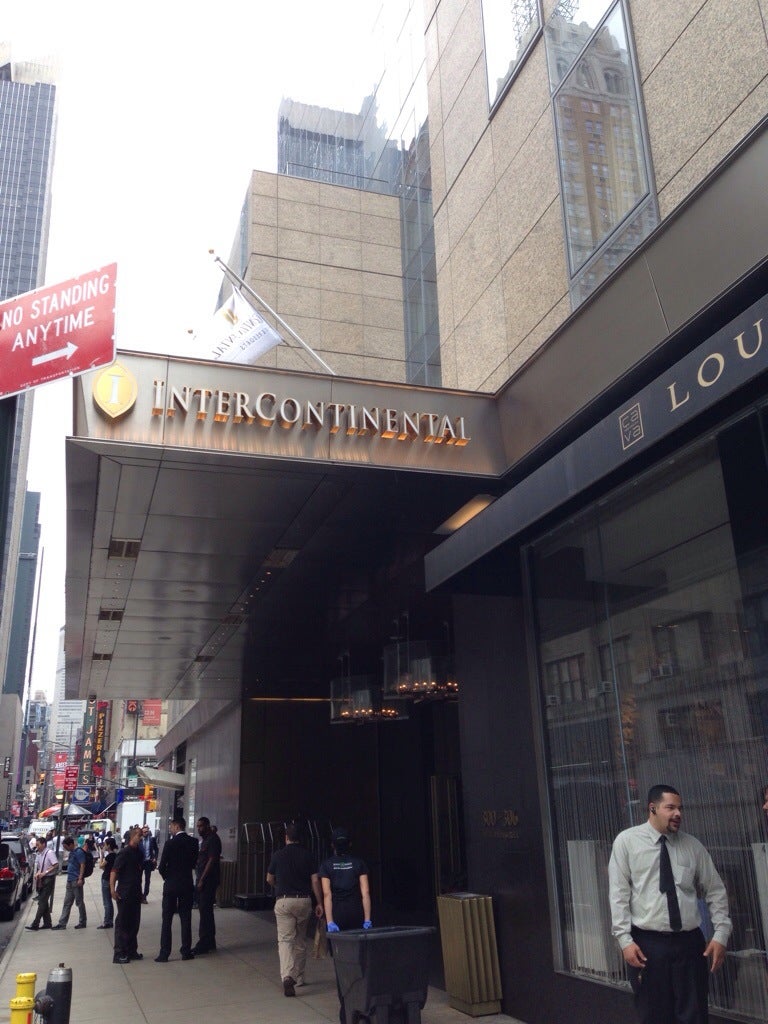 This is a pretty large property on 44th Street in New York City, which is just a block or two from the heart of Times Square.  That meant it was close to the buzz of Times Square, and a stone’s throw from Broadway shows, but not so close that the noise was a real issue.  It has 607 rooms, 240 of which have double beds that can sleep a family of four. That is a big deal in New York City!

Before I get further into the review, this stay was part of my participation in the American Express EveryDay Moments event, and as such as provided by American Express. The hotel itself did not sponsor the stay or know I would be writing a review, but that is still worth mentioning. Okay, now back to the good stuff…

The check-in staff was helpful and New-York-Friendly at every interaction. New York Friendly is different than Texas friendly, but no less helpful. Check-in was pretty unremarkable, but all my questions were answered and everything was in order quickly. I arrived well after the posted check-in time so my room was ready without incident or delay. They told me I had received a “nice” corner king room with a view of the city, and they were right. It had a very nice view of the city! 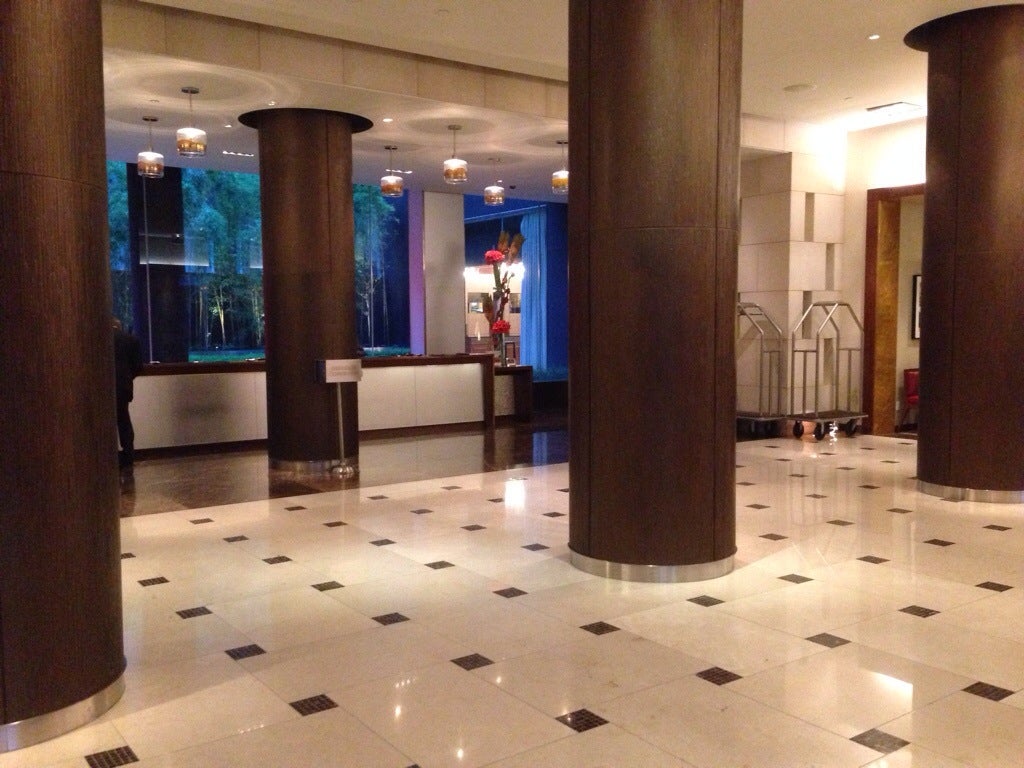 The lobby itself wasn’t too shabby to look at either with high ceilings and an interesting garden type space behind the check-in desk. There were two concierge tables located to the right of the check-in desk and a large and pretty swanky lounge just off of the restaurant area. 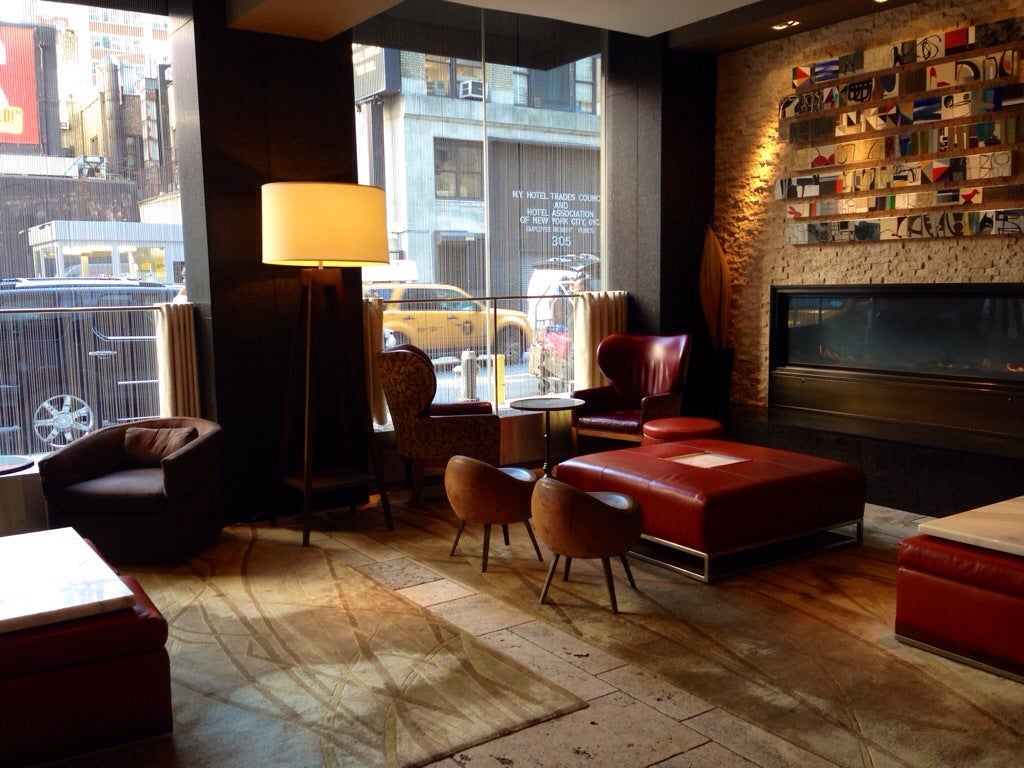 Before I get to the room itself, let’s talk about the elevators you have to use in order to get to your room. They were nice, fast, and clean, but… they were no easy to use. As is common in many hotels, you had to swipe your room key in order to utilize the elevators however the system was hard to use, and it wasn’t just me. Almost every time I was on the elevator with someone else they complained about the system as well. Many times the elevator would start going to another floor (sometimes in the wrong direction) before we could get the key card swipe thing to work. In fact, rare was the occasion that someone walked on, swiped correctly the first time, and we headed to the correct floor. This process needs to be improved as it impacts guests on almost every up and down trip in the elevator.

Once I successfully reached my corner room on the 28th floor (room 2825) I was impressed. The room wasn’t large, but this is Manhattan, so it wasn’t tiny either. 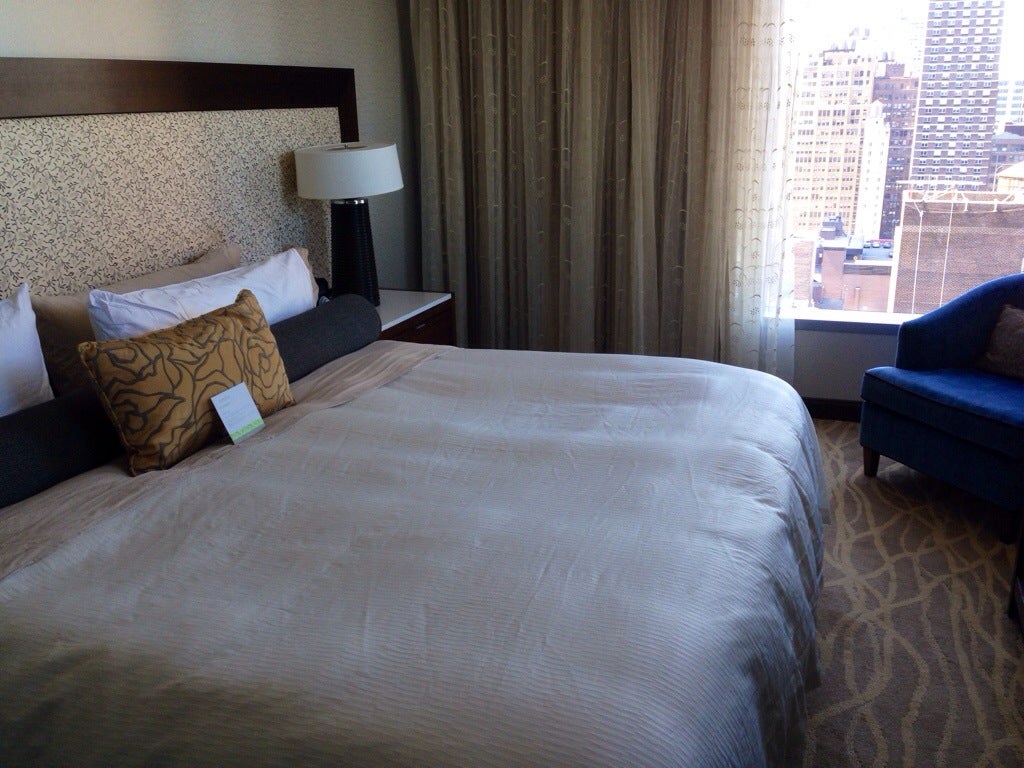 The views from both sets of large windows were great. Also, the blackout curtains were very well done if you wanted to keep some of the light out…Alaska hotel operators, come visit the Intercontinental Hotel Time Square and order what they use! 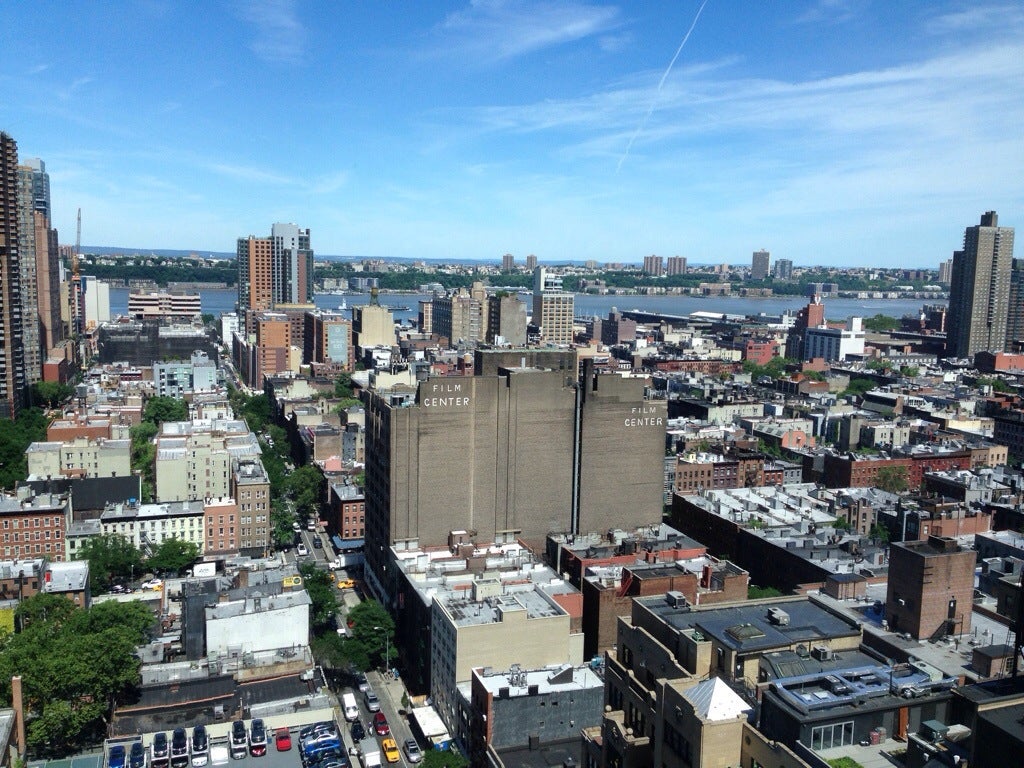 The absolute best part of this hotel room was the bed. I loved it and it was absolutely one of my very favorite hotel beds ever. The mattress was the right amount of firm and soft, the pillows were the right amount of snuggly, and the bedding was so soft and cozy. For three nights straight I was in bed Heaven. Again it was not just me, others on the trip repeatedly mentioned the great beds…or maybe they were just all glad to not be waking up to feed babies or tuck kids back in at night! Seriously though, the bed was awesome. The well functioning AC that kept the room nice and cool wasn’t bad either. 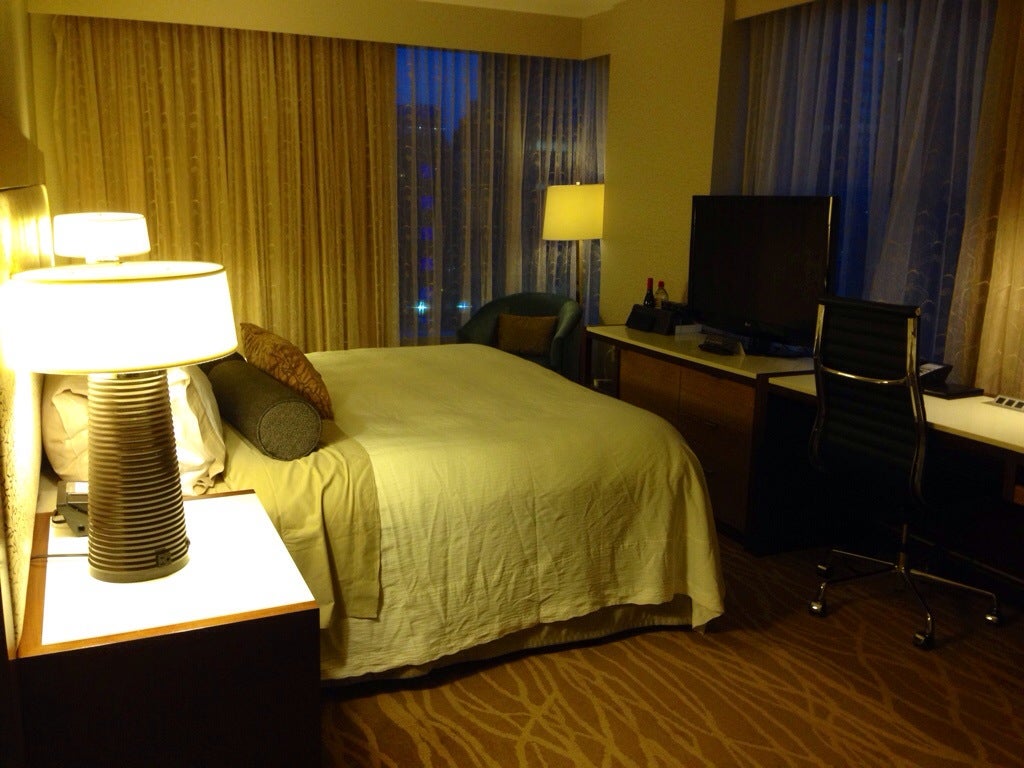 There was a long desk for work with helpful power plugs, a TV I never turned on so can’t comment on, and a sitting chair. The lighting was easy to work, which I appreciate since all too often I get into fights with lights I can’t turn on or off in fancy hotel rooms. 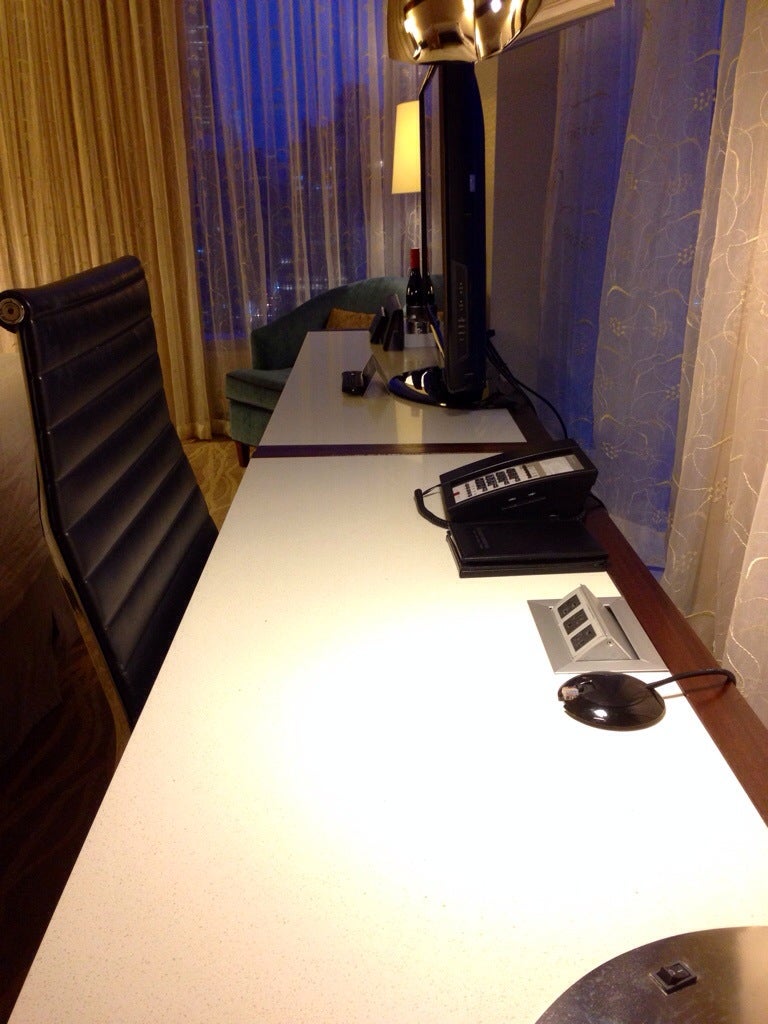 The internet was free to IHG Rewards members (hallelujah!), and I selected the premium option at $5 and it still was complimentary. The speed wasn’t earth shattering, but it wasn’t bad at all. It was totally useable even for this internet-aholic and worked on up to four devices I believe.

If the bed was my favorite part of the hotel, the bathroom had to also make the Top 3 list. It wasn’t just functional, but it was stylish and a little different than your everyday hotel bathroom. It had a rain shower, pretty blue tiles, and a mix of blue and white towels. It is described as a spa like bathroom, and I would agree with that description. If you have a family note that the website indicates that some of the rooms with two double beds have a bathtub as well. I love it when hotels do that in rooms that are more likely to have young kids. The water pressure and temperature were both great over the course of my three night stay. 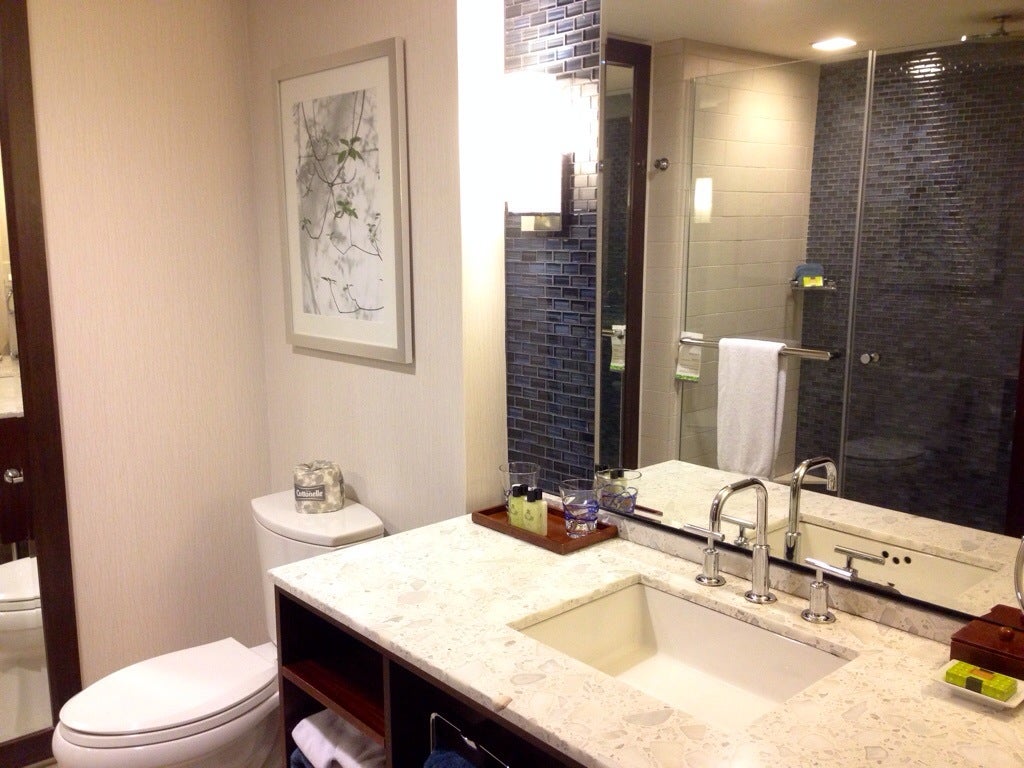 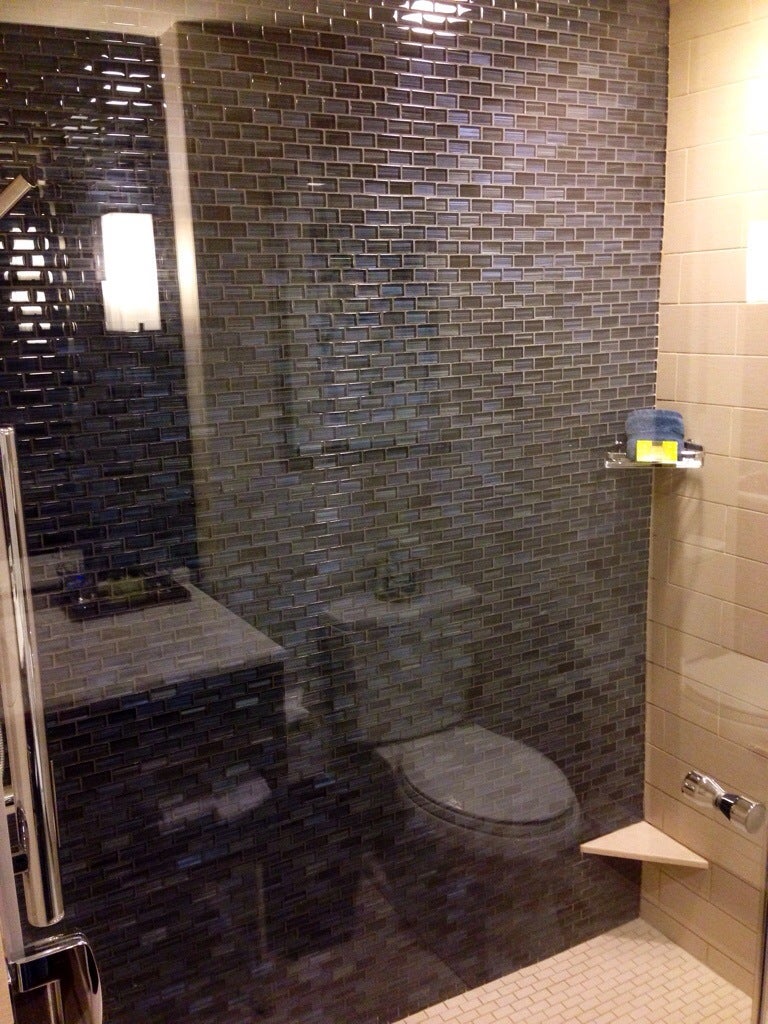 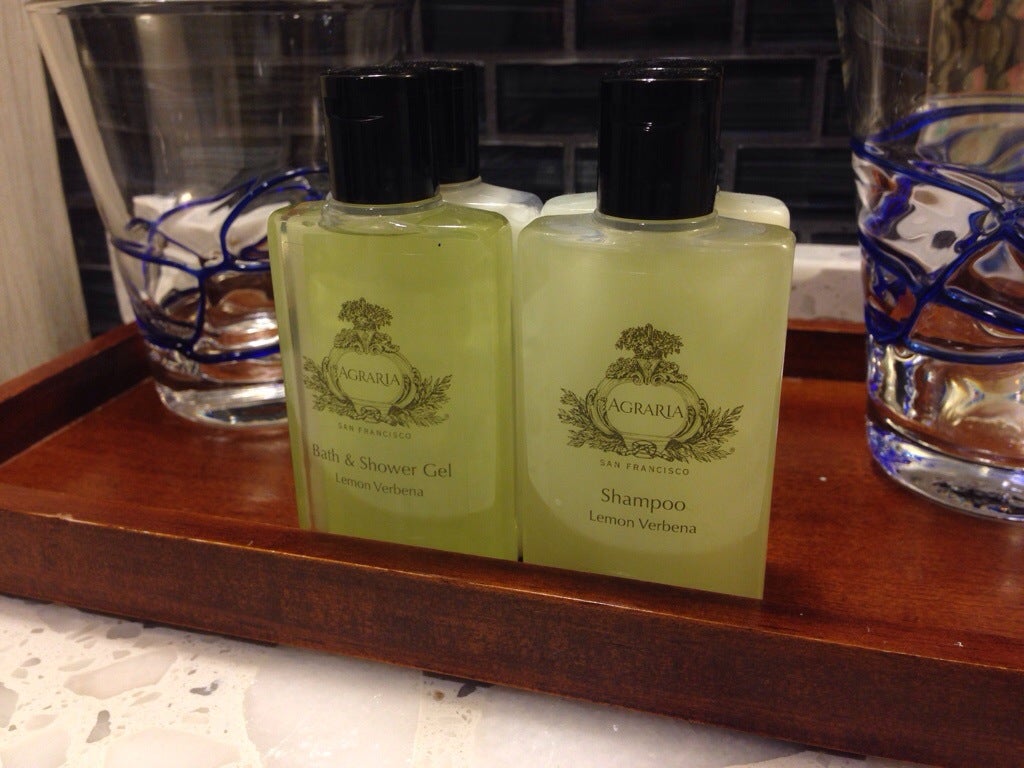 What made me really like this hotel was the staff and services provided. Like many of you, I’m busy and when traveling for work I’m often pressed for time. I like to have the option to eat at various times of the day in the hotel and really appreciate solid concierge and other services when needed. On this trip I only had a small window to eat and get ready before one event, so called room service with my small time window and they delivered as promised. Bonus points for a fun menu with falafel! 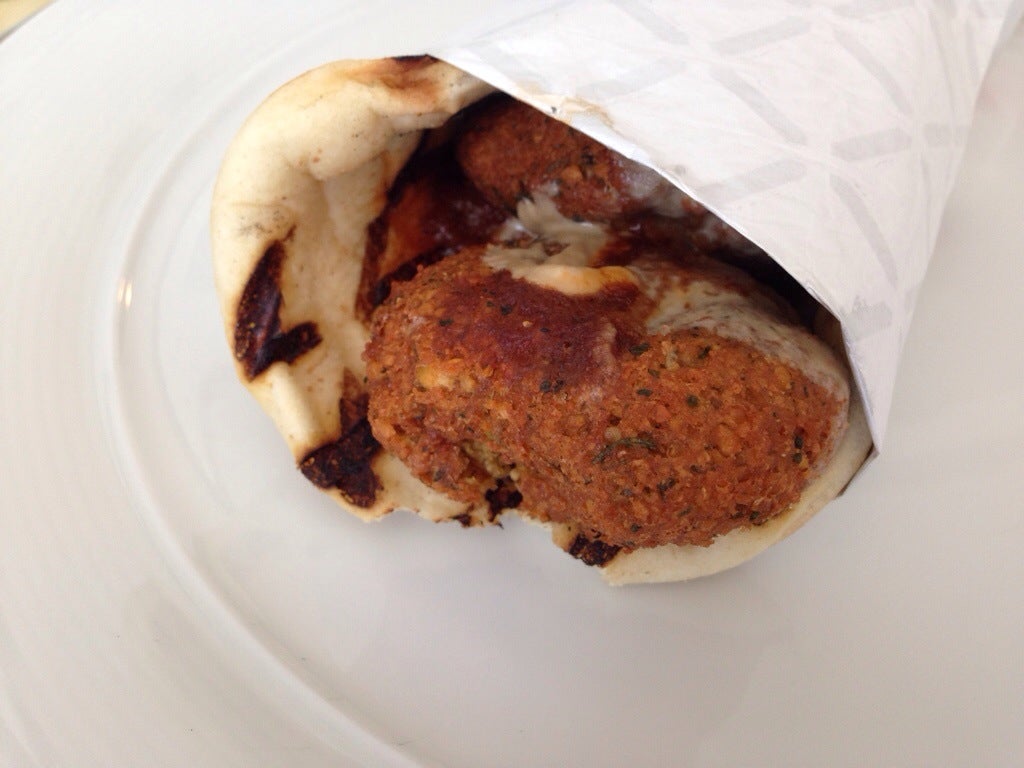 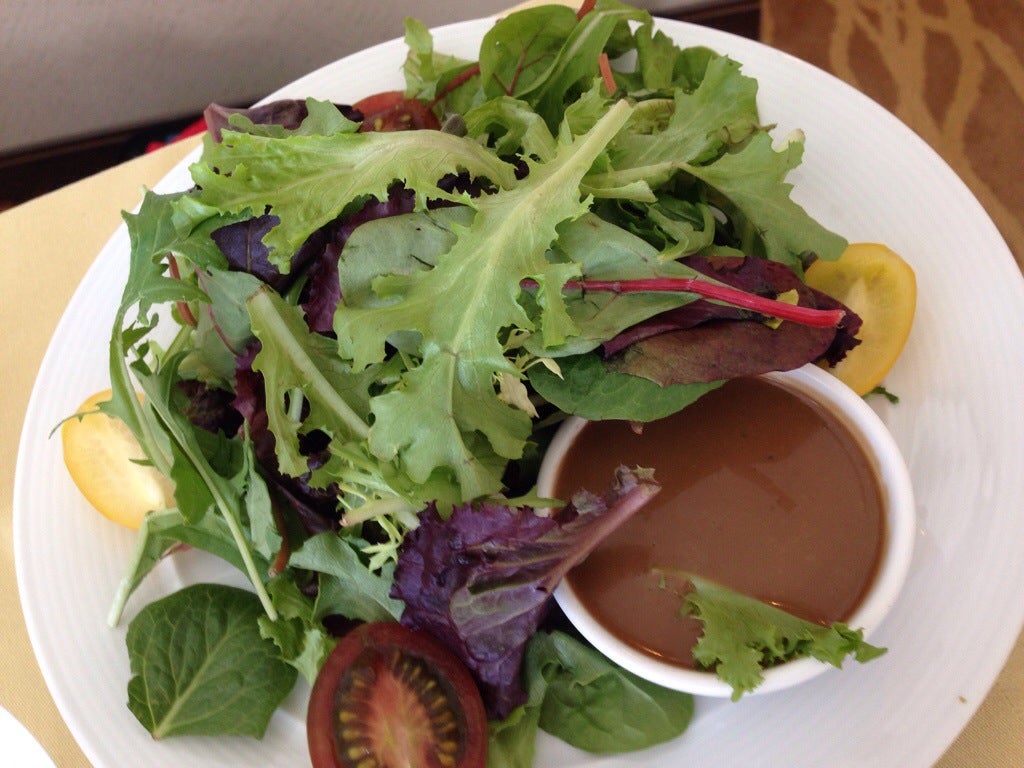 The only hiccup was I received salad with the wrap instead of the fruit salad I ordered. I’m sure they would have fixed it if I had called to let them know, but I didn’t really mind either way.

Another appreciated service was when I needed to get a package shipped out, and a call downstairs resulted in a FedEx box brought to my room and the promise to have my package held and shipped out on Monday (fingers crossed that works as intended).

My requests for nearby sushi restaurant and a juice bar were both successfully met by the concierge staff, and both places I tried were both good and quick, which was important.

I had the buffet breakfast in the restaurant one morning and again was thrilled with a speedy breakfast option, and the food was totally decent for a buffet with frequent coffee and juice refills from the servers.  If you want a more budget friendly option, there is a Starbucks literally around the corner. 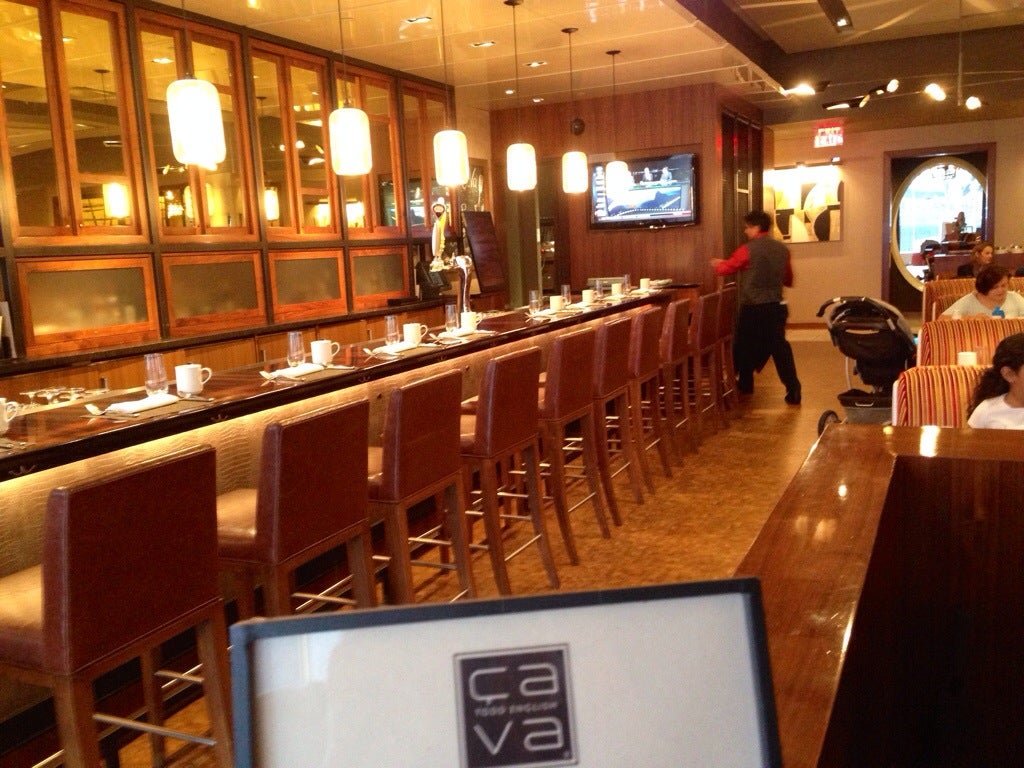 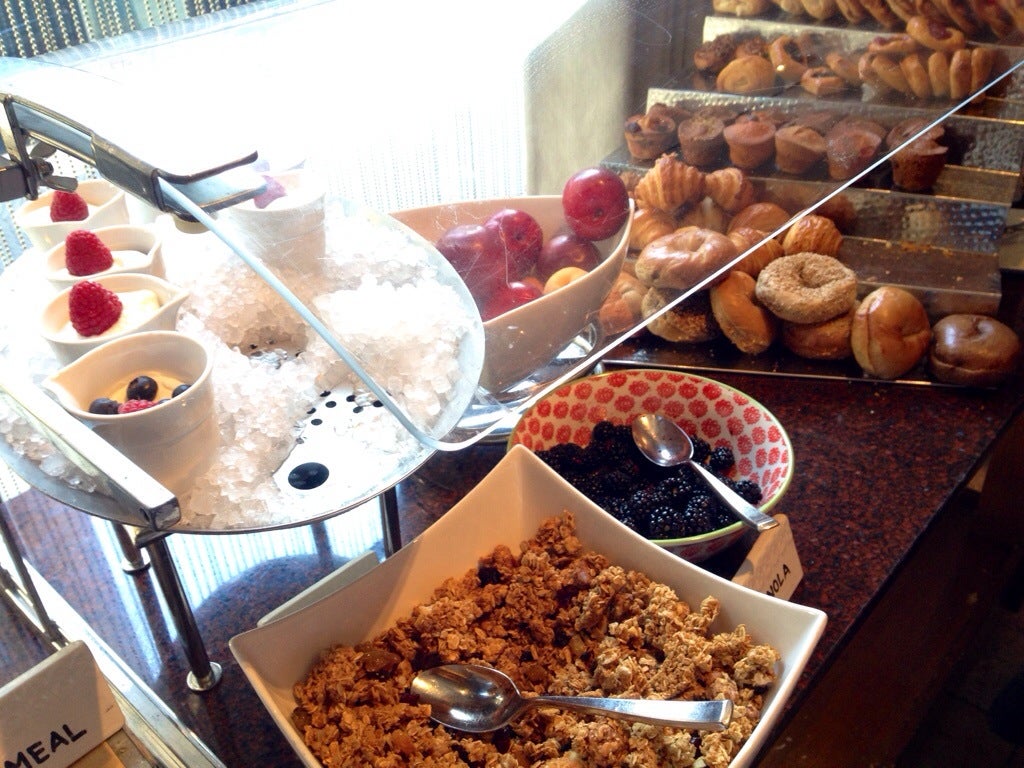 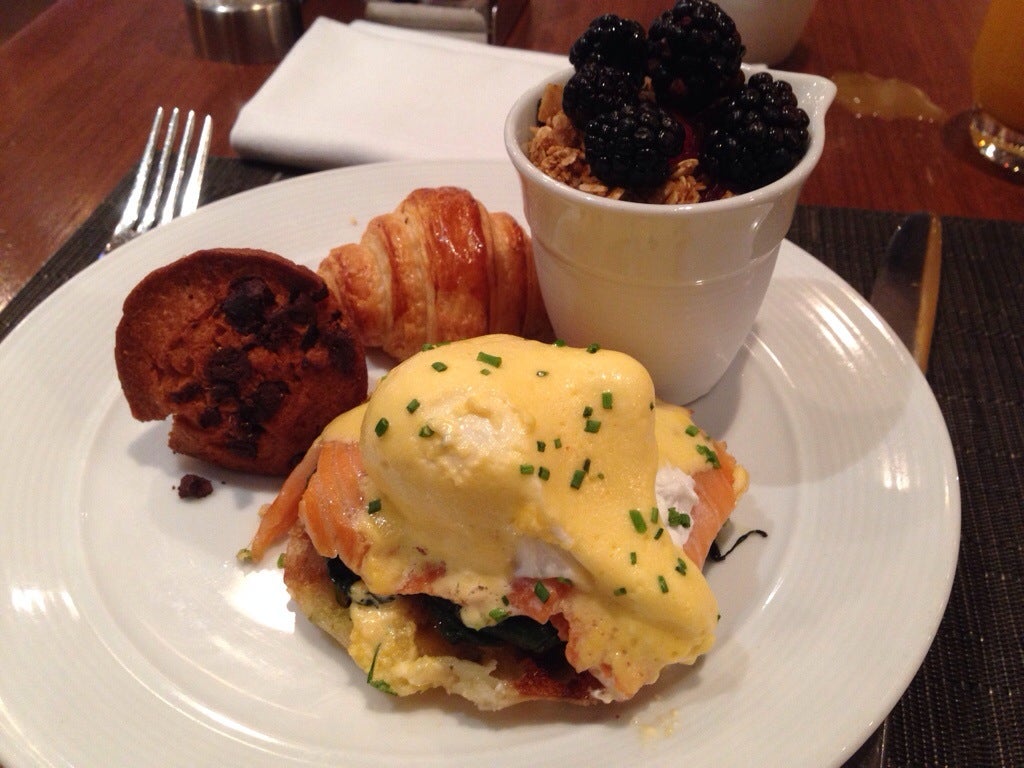 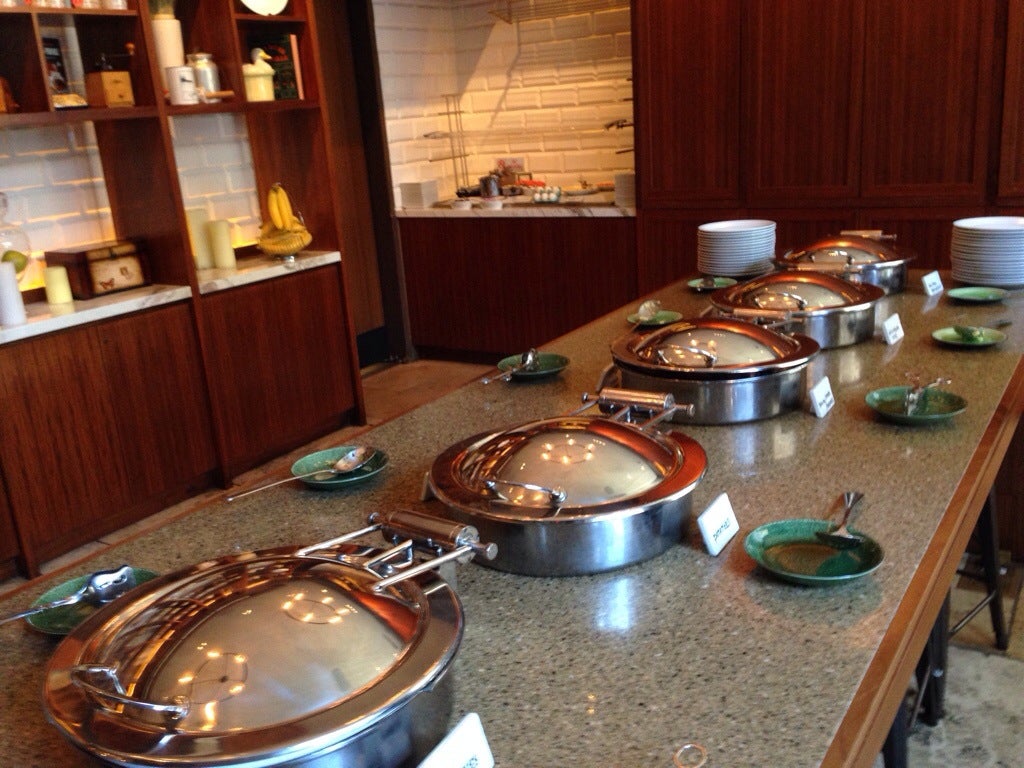 The hotel has a 2,000 square foot gym on the third floor, but I didn’t get to check out that amenity on this trip.  Note that there is no pool at this hotel.

As is common in Manhattan, this hotel is usually in the $300 – $400 range for a room (though I have seen it in on discount sites like TravelPony for $200+ per night). That’s a ton of cash, but there is a better way to do it on points/free nights. This hotel seems to be the perfect use of the annual free night you get by having the IHG Rewards Chase Credit Card (read this thread to find out about the best current offer). You can use it at any IHG Hotel, so makes sense to use it at one of the best in the country. Alternatively, you can redeem 50,000 IHG points per night to stay here and that will include a decent variety of room options all for the same points price. Since this is NYC, I recommend booking in advance for improved availability whenever possible.

If you have the IHG credit card you get 10% of your redeemed points back each year, so that makes the hotel more like 45,000 points per night.

This hotel won me over for having a good location for many tourist type activities in NYC, room configurations available that are favorable for families, an extremely comfortable bed, good bathroom, solid staff, and a full host of services and amenities. I look forward to hopefully getting to stay here again on a future trip to New York City!

If you have stayed here or at the other Intercontinental in New York I’d love to hear if your stay was similar to mine!

Summer Hull aka Mommy Points, ran the Mommy Points site for families who want to travel more for less using miles and points for seven years and now heads up TPG Family when she isn't exploring the world with her own two girls.
You might like
Masks required, Mickey sidelined: What to expect when Disney Cruise Line sails in August
News
9h ago
Testing in Portugal: My experience getting a COVID-19 test to return to the US
News
10h ago
You’ll soon be able to hike a new trail connecting Europe with Asia
News
11h ago
Delta SkyMiles® Platinum American Express Card