Activities For One Day in Oslo, Norway

As part of our big miles and points ski trip to Norway my friend and I had one night in Oslo to explore the city before we headed west to the ski resort.  By the time I got settled at the hotel it was just about time for dinner, but luckily my friend had arrived earlier in the day and had a chance to get out and explore a little more than I did (jealous!).  Here are some of the activities in Norway she got to experience as well as our Norwegian dinner destination, all of which were walkable from the Radisson Blu Plaza hotel.  Here is the review of that hotel and the other posts in this series.

Like most traveling parents I tend to scope out destinations in order to decide if they would be a good spot for me to bring my family in the future (I have a 3.5 year old). I found Oslo to be a great walking city and family destination.  There were a variety of families traveling throughout the city, and it was a place I would come back to again with my child.  At first glance the map the hotel provided made it look a lot bigger than it truly is.  The Radisson Blu Plaza Oslo was a great location since it was close to transportation, but only a 5-15 minute walk from many of the major attractions. 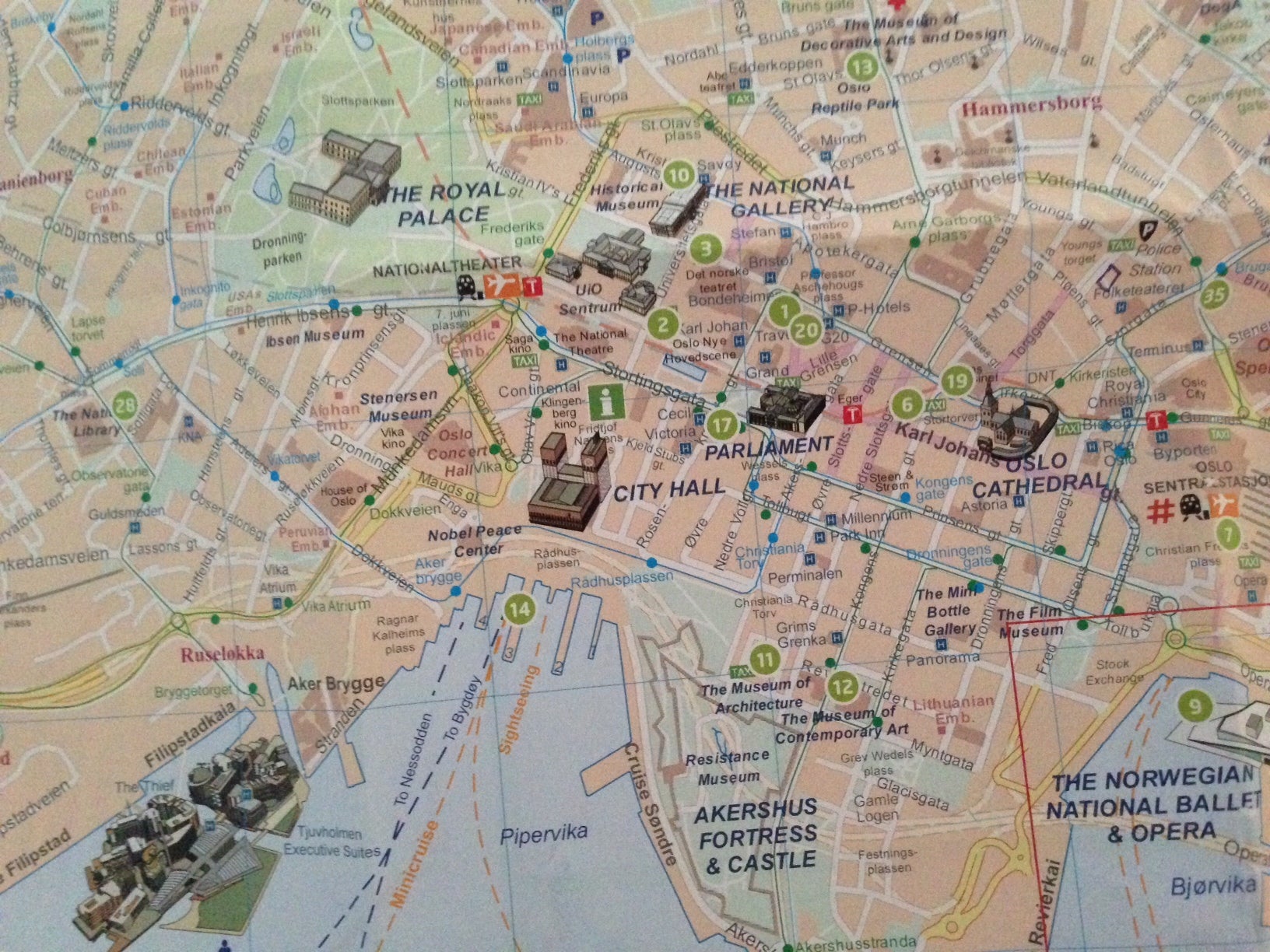 When I arrived I went directly over to the Royal Palace. I knew they did a changing of the guards every day at 1:30PM, and I wanted to see that event.  It was not an extravagant affair, but it was fun to see a piece of tradition happening. 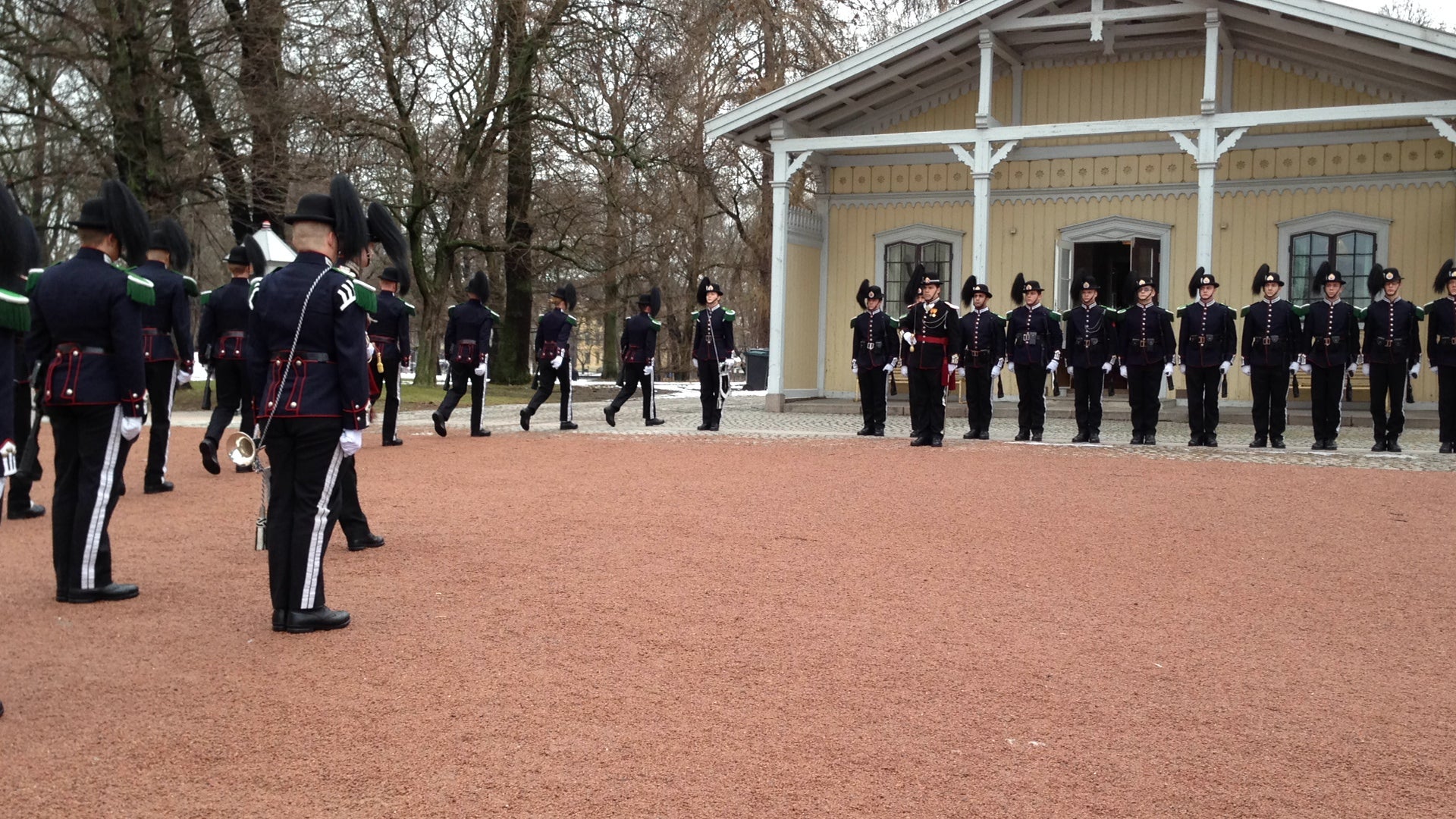 I walked the grounds of the Royal Palace but I didn’t find much else to really do there. The flag was raised high so the king was home! 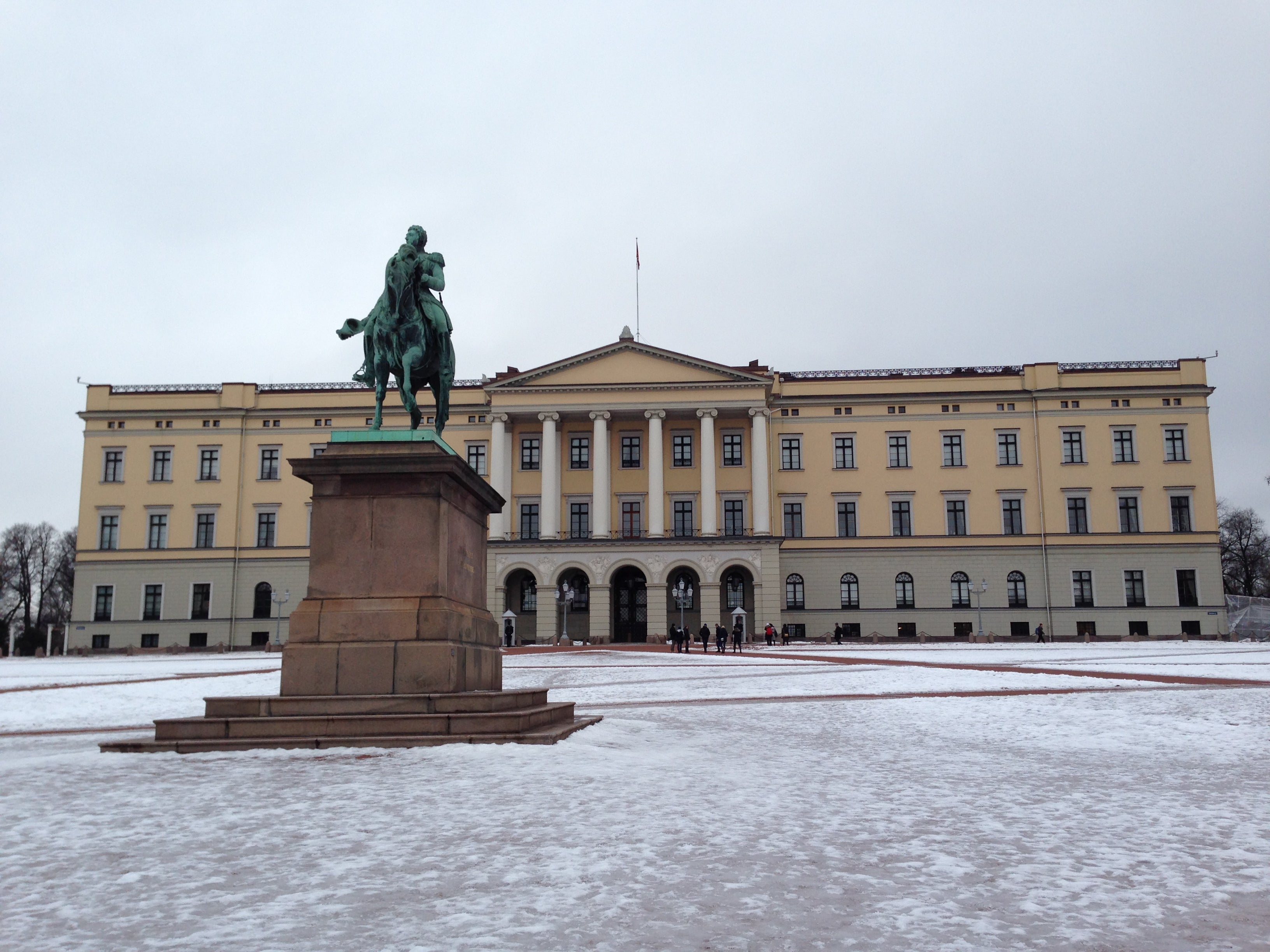 After making sure to visit the Palace I knew I had a few hours to explore before Summer arrived.  The town was easy and really enjoyable to walk around.  I had a map to reference, but if you stayed on Karl Johans (the main street through the main part of town) then you would hit quite a few of the major attractions.  This street goes all the way to the Royal Palace…

…and all the way back to the Comfort Hotel Grand Central. 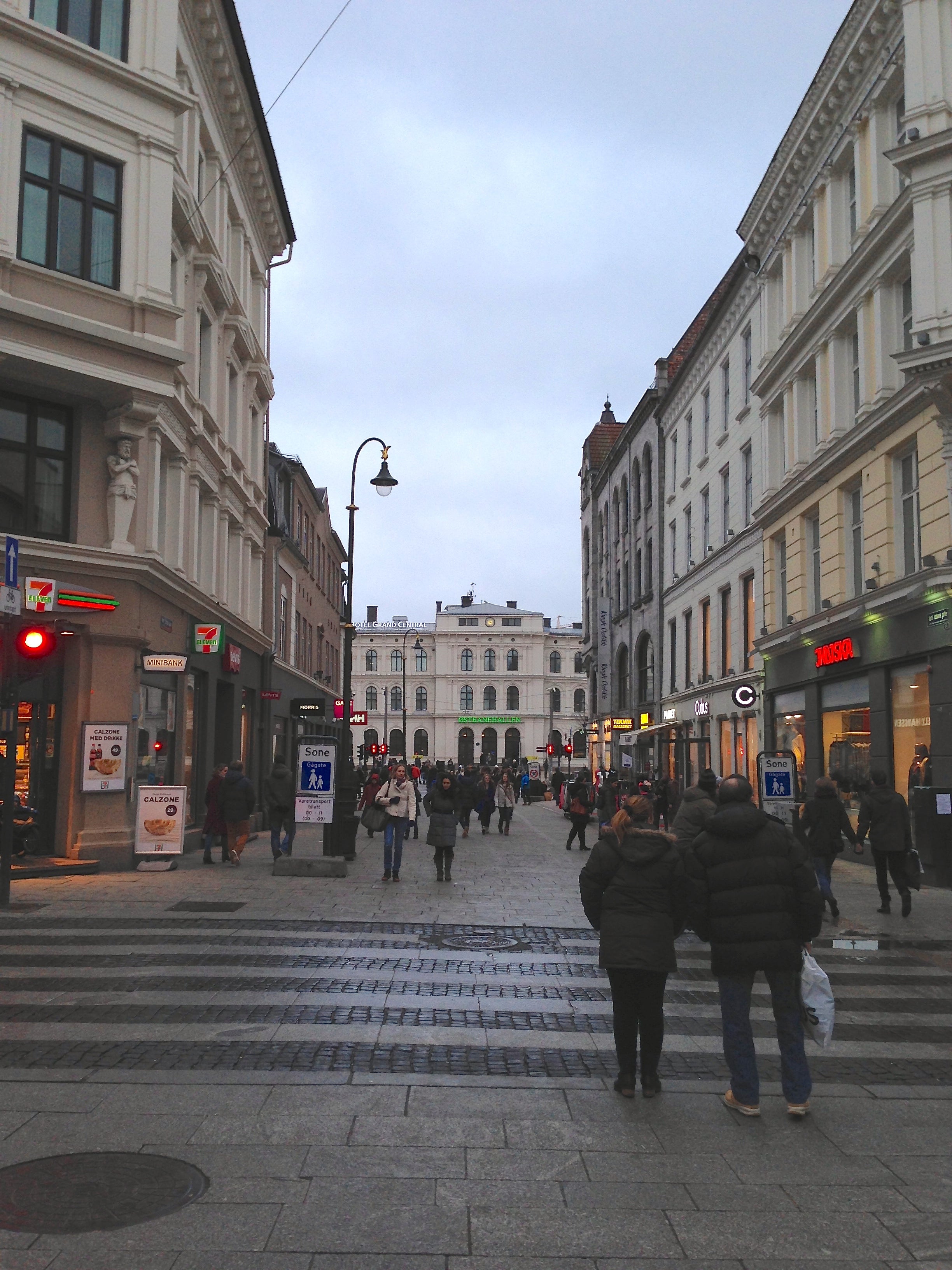 Facing that hotel you turn left, then right, and that gets you back to the central train station and bus station (which is where our hotel was located).  There is a big shopping center right next to the train station called Oslo City.  You can also walk through this to get to the walkways that go to the hotel and bus station, but it takes longer.

Walking Karl Johans, you go past the Cathedral, National Gallery Art Museum, Parliament, National Theatre, City Hall, and the major shopping district.  There was a fun ice skating rink in front of City Hall (and I enjoyed watching the hilarious conga line being formed by the skaters.)

After hitting up some of the attractions on the main street I ventured over to the Akershus Fortress and Castle.  I wasn’t sure what to expect, but from a distance I saw the huge fortress wall so I was curious.  The grounds of the castle are huge and you can get some great views of the city and water from up there.

I love hearing the history of a place when I travel, so I like to visit the museums and historical sites even if I only have a few hours. In this case, I am really glad I ventured over to this castle. I walked the grounds and explored the various buildings on site which include stables, old living quarters, various museums, paths around the fortress walls, and the old castle. 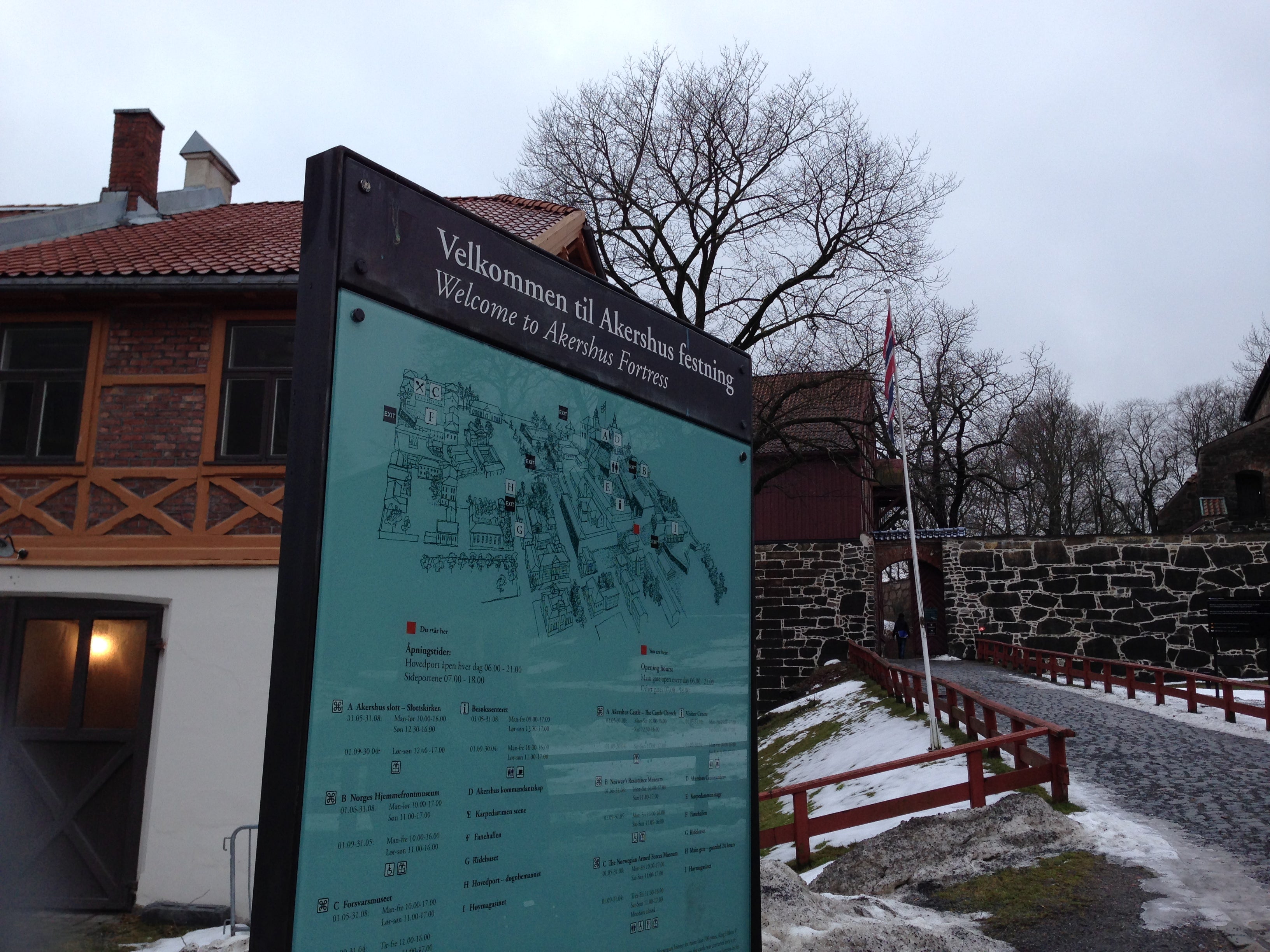 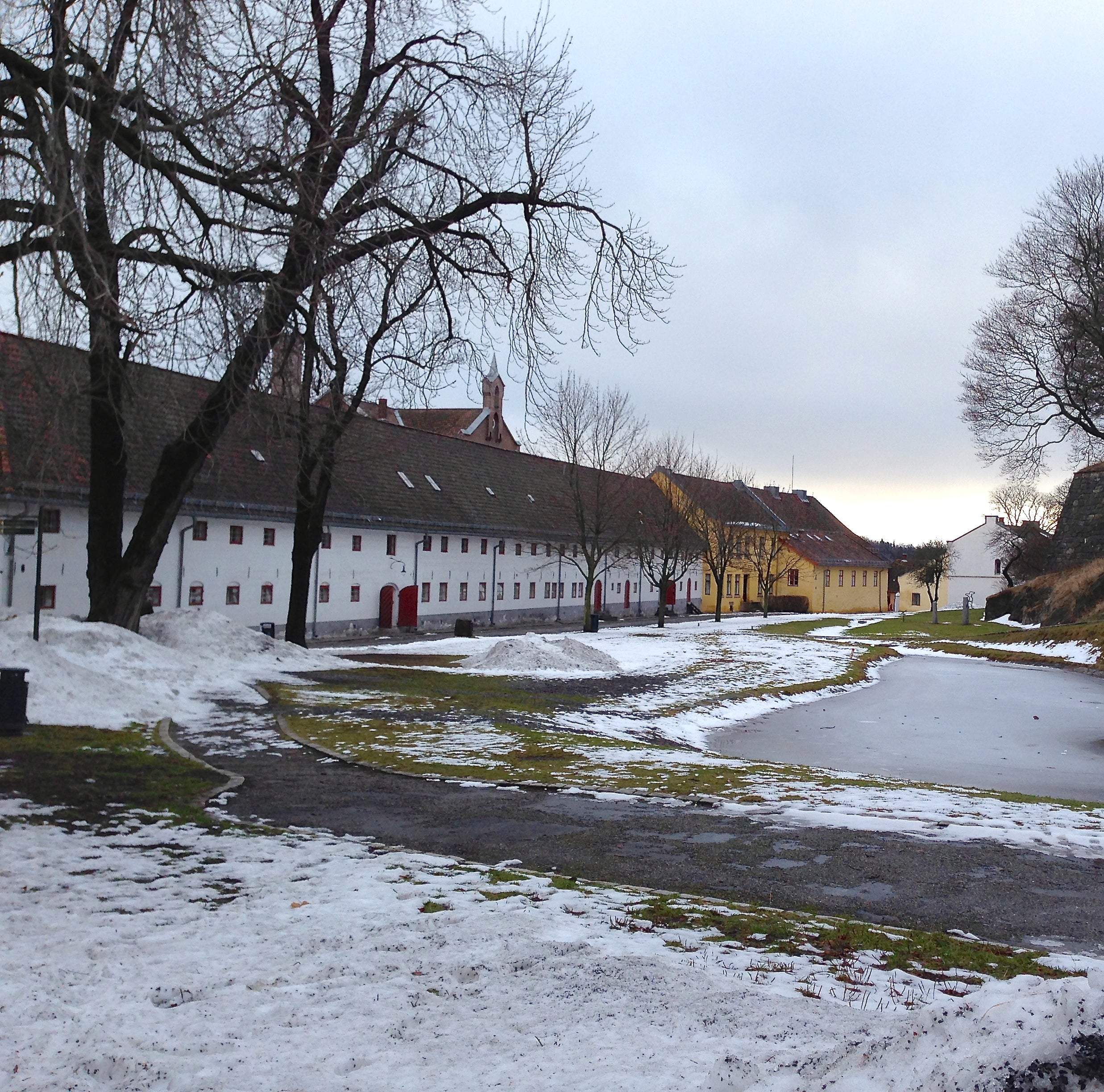 I took the tour of the castle which includes an audio guide that I found helpful. While no flash photography was allowed, I was still able to snap this shot of some armor and my goofy grin. 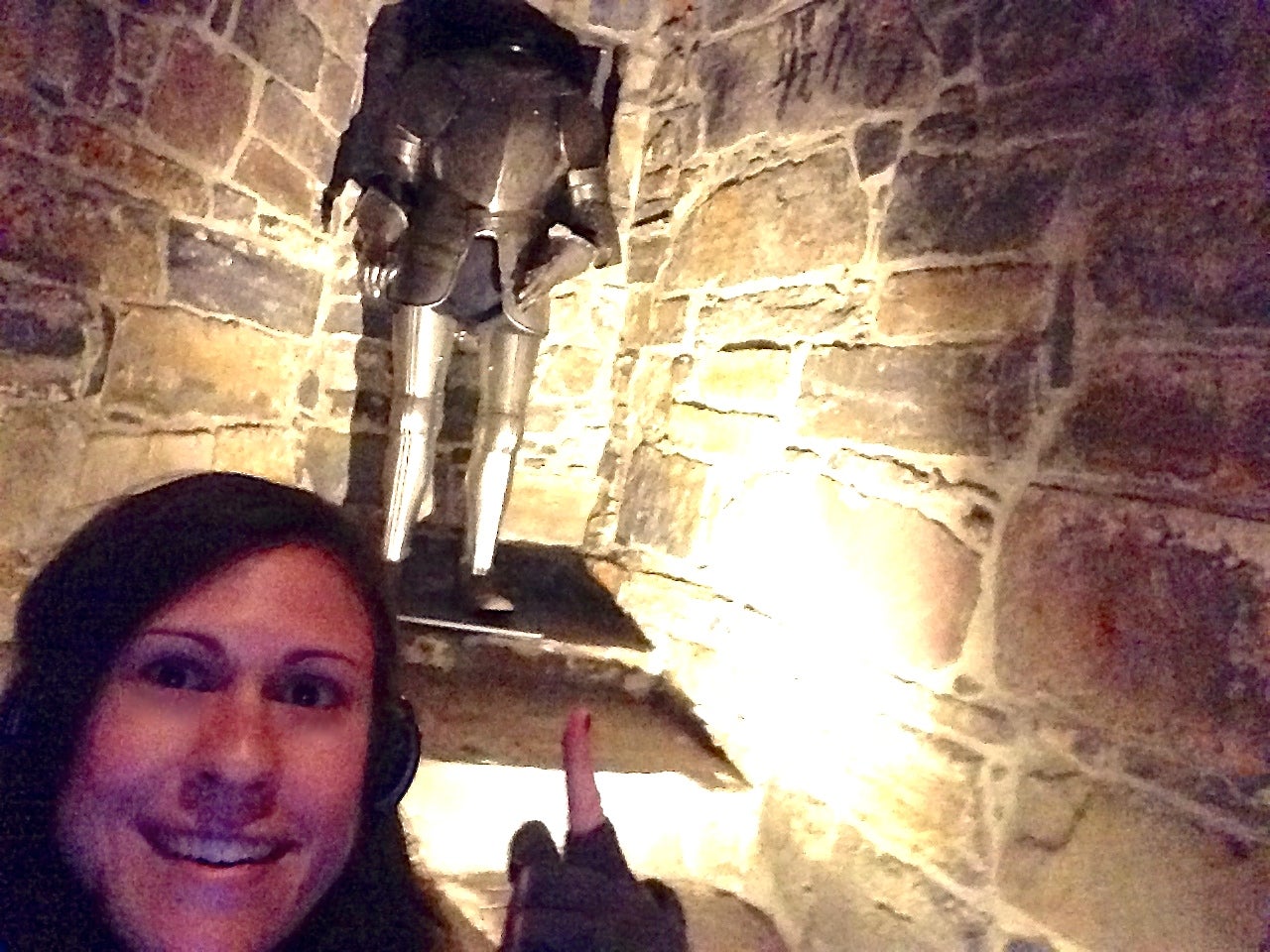 Within a few hours I was able to visit some of the major attractions in Oslo, and enjoy a good walk around the main part of the city.  Later on that night, Summer and I went in the opposite direction and explored another part of the town for dinner.  Our hotel recommended a restaurant called Olympen that has been a continuously operating restaurant since 1892 and seemed to be popular with locals as well as tourists.  We walked in for dinner around 6PM and they were able to accommodate the two of us, but only if we agreed to be done by 8PM, which we were.  I do recommend making reservations in advance to avoid taking the chance of them being too booked. 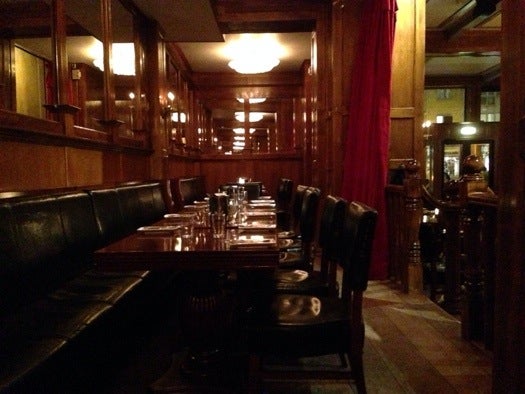 The menu at Olympen is based on traditional Norwegian food, and changes many times a year in order to use seasonal ingredients.  You could order a three course set menu or individual items as we did.  If you were a beer drinker, they reportedly have more than 150 different beers available!  We very much enjoyed the sausage and smoked haddock.  Note that they did have an English menu available upon request.  The meal was about $125 for the two of us including entrees, appetizer, and a glass of wine. 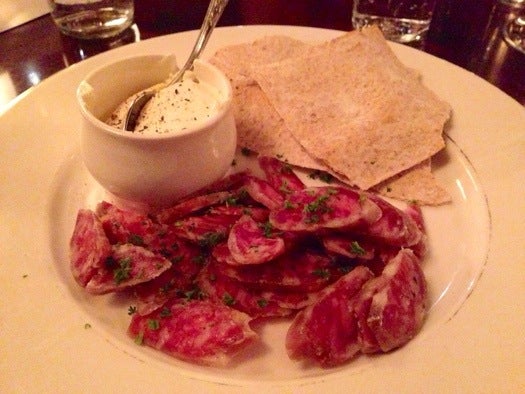 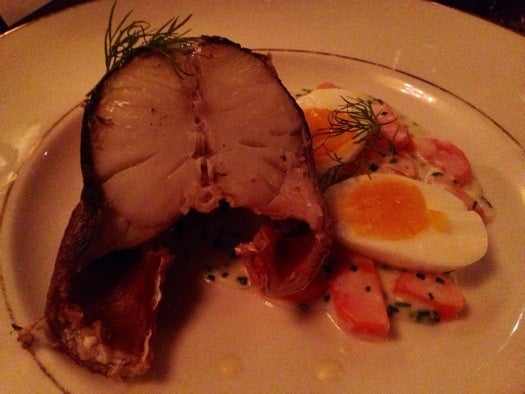 One last note, one of the sights I did not get to see but that comes highly recommended on major travel sites was the Viking Museum.  From what I understand you can take a local bus to get there, but I’m guessing it would take at least a few hours to get there and back and enjoy the museum, which was more time than I had to work with on this very short trip.

While we selected Oslo as a destination a bit randomly for this adventure, it turned out to be a great find, and I am delighted that I got to visit.  I may not have thought to visit Oslo if it weren’t for this ski trip to Trysil, but I really enjoyed the city and wish I had had more time to really get to know it better.  Even though we were there in February, even the temperatures were not that bad hovering in the mid-30’s.  The worst part was actually the rain as snow would have been easier to deal with!  I would happily visit again with my family.

Summer Hull aka Mommy Points, ran the Mommy Points site for families who want to travel more for less using miles and points for seven years and now heads up TPG Family when she isn't exploring the world with her own two girls.
You might like
Wasps on a plane! How insect infestations caused an unusual amount of Heathrow flight disruptions last year
News
30m ago
Why I (sometimes) choose to fly a budget airline over a full-service carrier
News
60m ago
What a 4-day workweek could mean for travelers
News
4h ago
Delta SkyMiles® Platinum American Express Card