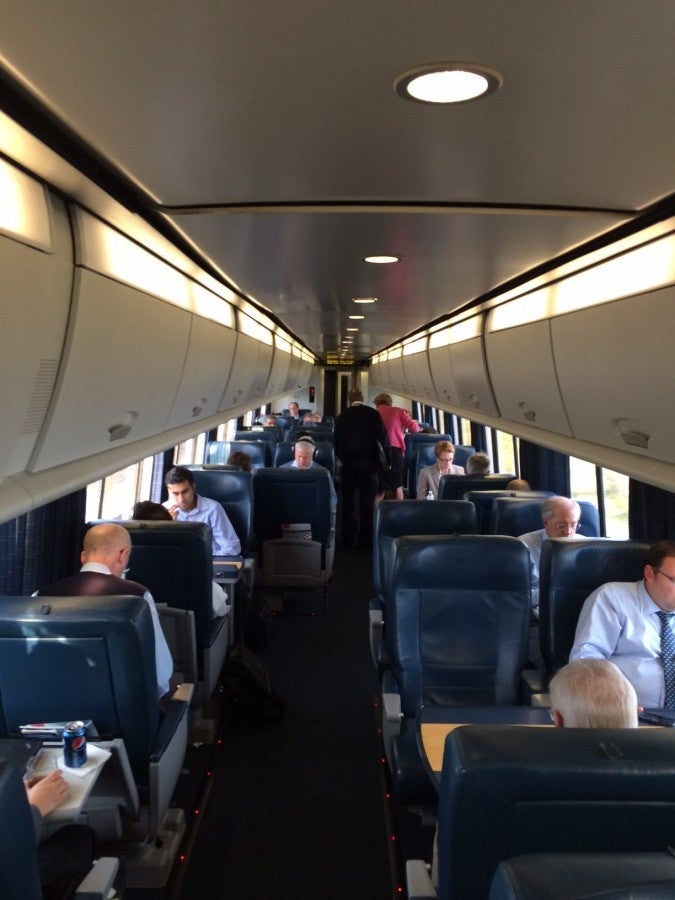 Train Review: Amtrak Acela First Class
This post contains references to products from one or more of our advertisers. We may receive compensation when you click on links to those products. Terms apply to the offers listed on this page. For an explanation of our Advertising Policy, visit this page.

Last week I headed to Delaware from New York City and decided to take Amtrak. A few days prior when I knew what my itinerary for the day was going to be, I checked out the fares on Amtrak from New York Penn Station into Wilmington, DE. It's a pretty painless trip that takes just under an hour and a half (and skips most of New Jersey), but I of course wanted to try out the different classes of service on the train, so I booked different classes in each direction.

Using the Amtrak iPhone app, which I found to have a pretty user-friendly interface, I purchased a first class ticket on the 10am Acela Express and a business class ticket on the Northeast Regional heading back to NYC at 3:34pm. The Acela Express only offers business and first class while only coach and business class are offered on all other Amtrak trains.

On the morning Acela Express train, business class seats were going for $138 each and you would have to pay an additional $78 to be bumped up to first class for a total of $216. For my return on the afternoon train, coach seats were $105 per person and an extra $30 to get a business seat for a total of $135. As I said, I opted for first class on the way to Wilmington and business class on the way home costing $351 roundtrip - which is actually a bit expensive for a quick trip down the east coast for the day, but still the best option for me since renting a car would have taken a lot more time and flying wasn't a convenient or time-saving option either.

I arrived at Penn Station pretty close to departure so I didn't have much extra time and ended up booking it to the train. But if I'd had a bit more time, I would have swung by the ClubAcela lounge in Penn Station that's exclusive to first class passengers. ClubAcela lounges can also be found in Boston South Station, Philadelphia 30th Street Station and Washington, DC Union Station. First class passengers also enjoy premium amenities onboard and complimentary onboard food and beverage services.

The ride was comfortable and the time passed quickly because of the extra amenities available in first class, like breakfast and drinks service, and I pretty much just hung out in the club car the whole ride. Although I didn't order breakfast on the way there, I was impressed by the options on the first class dining menu. For a starter you could have a breakfast biscuit and then you had a choice of a Basque Spanish Omelet with chorizo sausage, bell peppers and onions in a tomato sauce, a traditional Belgian Waffle, cereal and a bagel or a fruit plate with pineapple, melon, cantaloupe, vanilla yogurt and gluten free granola. There was also complimentary coffee and tea as well as cold beverages including apple, orange or cranberry juice and spring or sparkling water.

When I arrived at the Wilmington station to get on the train home I was told my train had been cancelled. I needed to get back for an event I was attending that evening so I hopped on the next Acela train and got a seat in first class though I had to shell out an extra $125 - bringing my trip cost to $476! Needless to say I wasn't thrilled - since I can fly from New York to Miami for about half that price, or even a roundtrip to/from Los Angeles for less than that.

However, to me it was worth it because I was able to get a more comfortable seat and the complimentary food and beverage services which I took advantage of.

I was starving, and figured I might as well make the most of it, so on my return trip I did order from the menu which offered a snack as well as entrees like spanish tapas, Thai chicken, salmon guajillo and a sunflower and goat cheese salad. The tapas consisted of chorizo sausage, manchego cheese, manzanillo olives, roasted tomatoes, spicy almonds and grilled pita bread. The salmon dish was a filet of salmon served over a pineapple sauce with brown rice and a summerberry parfait was also available for dessert. Everything sounded pretty tasty and was a much better menu than I had expected.

Overall my Amtrak experience was very pleasant and easy to book - I thought the first class service was a really nice way to travel and it made getting to/from New York quick and easy since Amtrak operates out of Penn Station in the heart of Manhattan, so it's quicker than getting out to one of the airports or having to rent a car in the city and navigate one of the tunnels or bridges. Some Amtrak trains also stop at Newark and in Philadelphia, you can link from 30th Street Station to the airport on SEPTA, so it could be a good option for folks who need to catch a flight from an airport in a different east coast city from the one in which they're based.

That said, the price of my ticket was rather high, even though it was in premium classes, and I don't think that I got $476 worth of service or convenience, but in a pinch, it definitely worked for me.

On the upside, I did get to take part in Amtrak's fall promotion, Double Days, which has been extended through November 22, 2013, and was able to earn double points on my travel so that lessened the blow a bit. Normally Amtrak Guest Rewards members earn 2 points per dollar spent on Amtrak travel, 500 points on an Acela business class trip or 750 points on each first class trip so a 50% increase is a decent bonus. If you're planning on any Amtrak travel in the near future be sure to register for the promotion and travel before November 22nd!

Featured image by Overview of the first class cabin