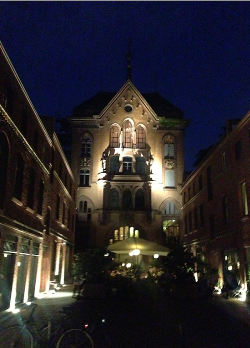 Berlin Restaurant Reviews: Katz Orange And Volt
This post contains references to products from one or more of our advertisers. We may receive compensation when you click on links to those products. Terms apply to the offers listed on this page. For an explanation of our Advertising Policy, visit this page.

Before I flew back from Berlin to New York aboard airberlin's business class, I spent a few days in the German capital staying at swanky Soho House Berlin. After an enjoyable first meal at the club and hotel's The Rooftop bar and pool, I reached out to TPG readers on Facebook and Twitter for restauarant recommendations and got two really good ones: Katz Orange and Volt.

For the second night of our stay, based on their recommendations, my friends and I ventured out to Katz Orange in Mitte, which opened last year in a former 19th-century brewery. There's actually a beautiful courtyard with tables as well, so if the weather is nice, make your reservation there.

The restaurant is helmed by a young German chef named Daniel Finke, who has traveled the world learning about different cultures and cuisines. His menu features dishes from all over the world made with regional ingredients, along with an old school cocktail bar stocked with spirits from German distilleries.

I started off with the Brandenburg Vegetable Garden Salad, a light plate of mixed greens, fennel, celeriac and walnuts. All the ingredients are from local farms so it was really nice and fresh - the perfect summery start to a meal.

When it came to entrees, we ordered from the menu described as 'Slow Cuisine,' because it is slowly roasted for 12 hours at a very low temperature and then served with its own gravy. The dishes are designed for two and perfect for sharing.

We opted for the shoulder of Brandenburg Wild Boar marinated in a raspberry vinegar, which was a lot of meat but truly amazing - tender, juicy and hearty.

Next was the short ribs of Uckermark beef, in an interesting glaze of soy sauce, ginger and sugar beet syrup. Both orders of meat were melt-in-your mouth succulent and highly recommended. Sadly, I wish I could say the same amount the service, which I found to be a bit lacking - staff were slow, unattentive, and uninterested in keeping our meal moving along, or even making sure we had drinks. At the end of our feast, the table looked like a crime scene and we sat like that for about 20 minutes until they finally decided to clear our table.

Still, just for the food, I'd highly recommend Katz Orange, it's one of the restaurants that is putting Berlin's dining scene on the map, and the dishes we had were delicious.

Our restaurant choice the following night came from a TPG reader on Facebook, for which I am very grateful! We went to Restaurant Volt in the trendy Kreuzberg area, which is housed in a converted power station originally built in 1928 (our dining theme was apparently new restaurants in old industrial buildings). You definitely felt the industrial atmosphere here - the space is huge and made of brick with touches like big copper lamps and high ceilings - it felt very cool, funky and "now."

Also helping convince us to go was the fact that Volt has been described on TripAdvisor as the best restaurant in Berlin - and rightly so. Instead of going a la carte, we chose the four course set menu for 59 EUR ($78), everything was outstanding and they really took care with the sequence of each dish.

The staff started us off with a fresh and varied amuse of various fruits in dried, jelly and sorbet form, which is always a nice touch.

Our first course was uniquely names Peas of Plenty, and consisted of veal sirloin, peas, mushrooms and balsamic vinegar - all very light and fresh with a variety of textures and an overall earthy flavor.

The next round was an interesting choice of cheeks of suckling pig, pear and sunchoke with a pungent helping of smoked eel that transformed the dish into a really interesting flavor combination that we kept thinking about the rest of the night.

For our third course, we had Guinea Fowl and Guinea Fowl - so no prizes for guessing what was the main ingredient! The delicate, mild meat was set off nicely by spiced nectarine, smoked pumpkin and coconut. I'm a huge fan of coconut, but it was pretty powerful and the waitress said that some people sent the dish back because they didn't like the flavor. For me, it was a knockout.

For dessert, we had the option of melon and yoghurt or a selection of 'Incredible' German cheeses with chutney, fruit loaf and salted almonds. Well, since it was called "incredible" there was no way I couldn't order it! I was very pleased with my choice of the latter as the delectable small servings were the ideal and definitely lived up to their name.

Instead of wine pairings, we were all drinking different things, though we wanted to try some German wines, so the server suggested a Riesling. I'm not a huge Riesling fan because many of the ones I've tried have been too sweet for me, but this one was a "trocken" classification, meaning it was fairly dry and acidic, and it was just the right choice to whet the appetite and complement the food without overpowering it. The one we had was called Weinhaus Karl Friedrich Aust 2011 Bacchus trocken Riesling, and was delicious.

Overall, Volt was outstanding and I would highly recommend it to anyone visiting Berlin. While I loved the food at Katz Orange, the poor service sadly dampened the experience. It seems that TPG readers give even better restaurant referrals than the staff at the Soho House! Feel free to share your own Berlin recommendations below.
[card card-name='Chase Sapphire Preferred® Card' card-id='22125056' type='javascript' bullet-id='1']

Related stories
Legislation that could gut credit card rewards set to move through Congress
Would you stay at 1 of these 8 haunted hotels this Halloween?
Southwest winter flash sale: Get one-way flights for as low as $29
You can currently buy points and miles with up to a 100% bonus — but should you?
Featured image by Exterior of the Katz Orange in Berlin.