A couple of months ago I had the fortune of being able to snag a last minute flight on the A380 in Lufthansa First Class from Frankfurt to San Francisco. I think I have been delaying blogging about the details as it is kind of waiting to open the last present on Christmas morning…it is like if I write about it, it is over. But, it is over, and it was a great experience I am excited to share. I’ll cover the actual flight in a post later this week, but wanted to devote to the First Class Terminal since it a pretty swanky place to visit!

I connected in Frankfurt from a flight originating in Zurich, so I had quite a trek to get from inside the airport, to the outdoors where the First Class Terminal is located near Terminal 1. I could have just visited the First Class Lounge, but some of my miles and buddies told me I must go to the actual terminal or I would never be spoken to again…or something along those lines. So, I walked a fair distance (more than I would want to do in a hurry if my kid were with me) to get out of the airport, and then turned right once I was outside and walked another hundred yards or so to the First Class Terminal.

I think I had to hit a buzzer or something to enter.  Once inside I was greeted and asked to show my ID and boarding pass.  Since I had an onward first class ticket on Lufthansa I was admitted to the club.  If I had just flown in on Lufthansa First I could visit one of the First Class Lounges, but not the actual First Class Terminal.

After verifying that I was indeed able to be in the terminal that day, I was escorted to their private security screening area.  I had left airport security to get to the terminal, so now had to go through it again.  Honestly, this was all worth it as it was my first time to visit, but if I were doing it again I might just visit the lounge within the airport and skip some of the extra walk and a second visit through security.  It was pretty cool having my own private security screening though!

Once that was finished I was told that they would come and find me when it was time to board and then I was turned loose to enjoy the amenities.  Since I had already been up for many hours by that point in the day and had walked very very quickly to the terminal to maximize the time I had on the ground in Frankfurt, I opted to take a bath.  I know, a bath in an airport?!  I get a little creeped out by showers and bath tubs outside of my own house, but this one looked so nice and clean that I didn’t hesitate to hop right in.  There is a bath/shower attendant who will assign a room for you and make sure you have what you need. 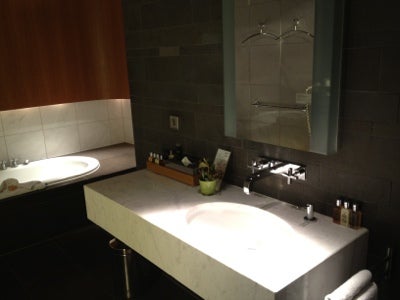 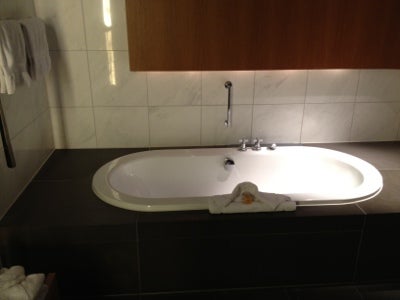 I think I started laughing several times during my bath, as it was all just so absurd that this is even available…but it was also awesome!  The only letdown of the bath experience was the absence of a rubber ducky (I feel like a moron for even typing this).  Lufthansa is well known for their little rubber duckies in the bath tubs.  Everyone hijacks the duckies to take home as souvenir, and I was hoping to bring one back to my daughter.  However, the bath attendant told me they were no longer carrying the rubber duckies.  I was shocked and this proved to not at all be the case as they are still around to this day, but for whatever reason they weren’t available the day I was there.  Clearly not a big deal, but wanted to point it out since some folks collect those little ducks.  ;)

After a nice bath and a change of clothes I peeked into one of the sleeping rooms.  I didn’t have time for a nap on my visit, but I love that they have rooms designed for that purpose. 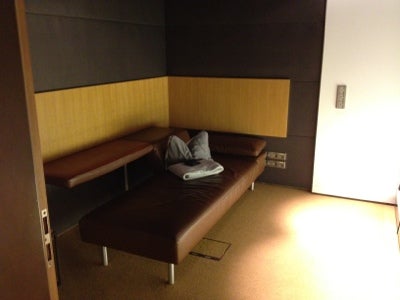 There were many different sitting areas available, and on the day I was there they were mostly empty.   I was like a kid in a candy store so I would sit in an area for about 5-10 minutes and then move somewhere else. 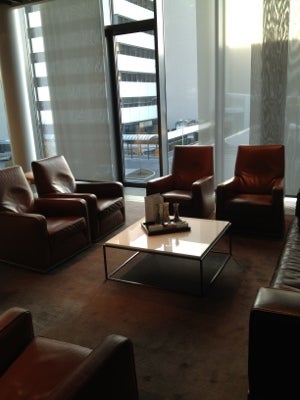 There is a bar area and an extensive selection of many types of liquor!  It was too early in the day for me to fully participate in this amenity, but it looked quite impressive.  Oh and, psst, it’s all free (other than the cost of the First Class ticket of course).  ;) 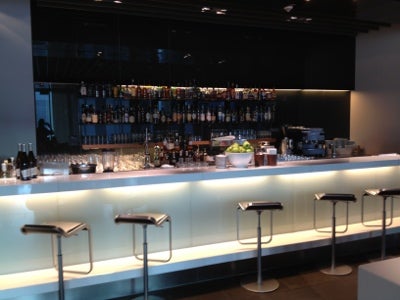 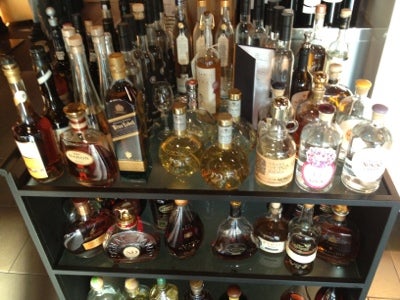 There is also a restaurant within the terminal that is also complimentary.  You can order at the table or head up to the buffet to make a plate. 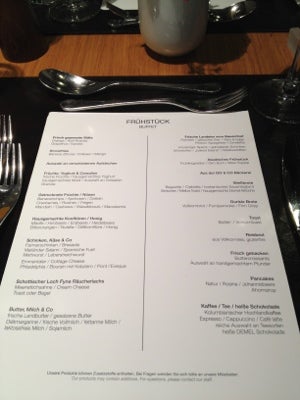 I was there pretty early in the day, so most of the foods were various typical breakfast offerings.  I didn’t eat too much, but I tried a few things and had no complaints.  If you have a longer layover than me then you can make much better use of the available food and beverages than I did. 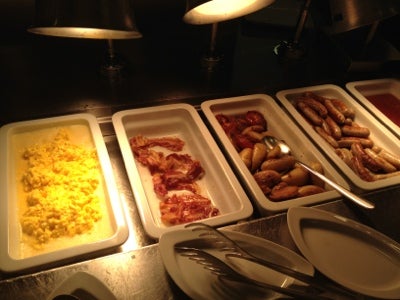 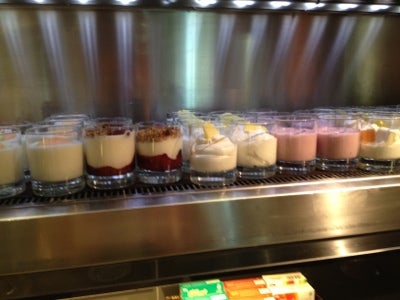 In case you are ever visiting the First Class Terminal with your little ones – they even have high chairs! 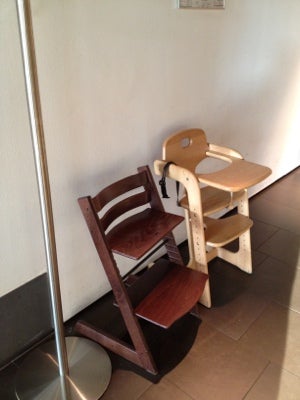 After about an hour, I was told my flight was about to begin boarding and it was time to be driven on the tarmac to my plane via a Mercedes.  This is what makes the First Class Terminal so bad a%#.  In what world do I need to be driven directly to my waiting plane?  Did I die and fall into a James Bond movie?  Heck no, I just happened to use United miles to book this awesome adventure.  In fairness the Mercedes wasn’t the sexy James Bond-style car I had envisioned, but that is a minor detail.  It was insanely awesome to be driven directly to your plane. 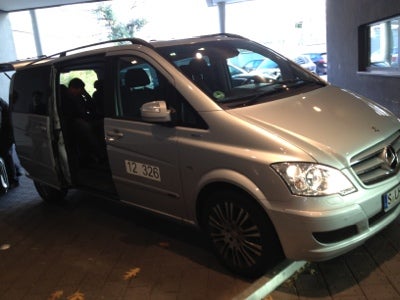 Once you arrived at your plane you were taken inside to an elevator that connected to a jet-bridge to your plane. 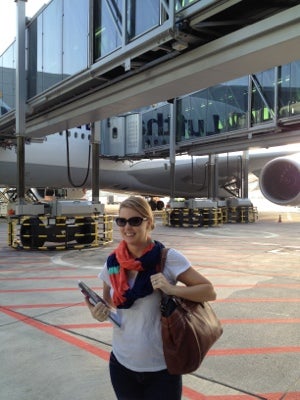 We didn’t have to go into the gate area or wait in any lines at all – just waltzed right on-board.

…and that is where the real fun began!

Summer Hull aka Mommy Points, ran the Mommy Points site for families who want to travel more for less using miles and points for seven years and now heads up TPG Family when she isn't exploring the world with her own two girls.
You might like
Alaska Airlines shows its Pride with LGBTQIA+ livery
News
6h ago
Register for our next Return of Travel webinar with luxury-travel expert Tom Ho
News
7h ago
Priority Pass members losing access to 57 Plaza Premium lounges as of July 1
News
8h ago
Delta SkyMiles® Platinum American Express Card

Top offers from our partners
How we chose
✕
How we chose these cards
Our points-obsessed staff uses a plethora of credit cards on a daily basis. If anyone on our team wouldn't recommend an offer to a friend or family member, we wouldn't recommend it on The Points Guy either. Our opinions are our own, and have not been reviewed, approved, or endorsed by our advertising partners.
Learn More Terms Apply
Capital One Venture Rewards Credit Card
Current Offer
Up to 100,000 bonus miles
Learn More
Terms Apply
Learn More Terms Apply
The Platinum Card® from American Express
Current Offer
Earn 75,000 points
Learn More
Terms Apply
TPG Exclusive Offer
Learn More Terms Apply
TPG Exclusive Offer
The Business Platinum Card® from American Express
125,000 bonus points
100,000 points