Destination of the Week: Kauai 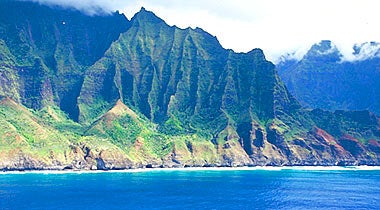 Destination of the Week: Kauai
This post contains references to products from one or more of our advertisers. We may receive compensation when you click on links to those products. Terms apply to the offers listed on this page. For an explanation of our Advertising Policy, visit this page.

As winter really begins to set in over most of the country with freezing conditions, it’s time to start considering some sunny destinations where you can earn and use your points. That’s why this week’s Destination of the Week is: Kauai.

Kauai is the northernmost and oldest of the Hawaiian Islands. Though it has a ton of hotels, it’s not quite as developed as Oahu or Maui, so it still feels like you can have an authentic Hawaiian experience without hordes of tourists ruining your vacation.

Because of the lush rainforests that cover the interior, it has been dubbed Hawaii’s Garden Island, and has a variety of gorgeous landscapes for travelers to visit including the rugged Waimea Valley (known as the Grand Canyon of Hawaii), the scenic cliffs of the Na Pali Coast in the northwest, and the gentle beaches of Poipu on the southern shore. Then again, you can just relax by the pool or on the beach, spend an afternoon swimming, snorkeling or sailing, and enjoy a fireside luau in the evening.

If you’re interested in learning more about the island, its history, landscapes and particular destinations, the Hawaii tourism board has a great page devoted to with tons of information and resources for travelers.

Just a reminder, these Destination of the Week pieces are not meant to be comprehensive guides to destinations since we don’t have the time or funds to visit all these places in person and report back to you. Nor are they instant endorsements of all the hotels we mention. They are simply roundups of top destinations that we have specifically pinpointed for the opportunity they present to use your miles and points to get to and stay there.

As always, we welcome your comments to help enrich the content here, provide opinions and first-hand experiences of any or all of these destinations.

Everyone has a story about how their vacation on Kauai was ruined by rain (I even have one from my own childhood—my family left after 3 straight days of rain one March and went to Palm Springs). The good news is that it’s usually the interior of the island around Mt. Waialeale that’s the rainiest (in fact, it’s the rainiest spot on the planet with over 400 inches a year), but it’s usually not so bad on the coast, and when it does rain, it’s usually at nighttime and over quickly.

December-March are the rainiest months—just when most folks hope to go there to escape winter weather—and though the north and east shores get a fair amount of rain, the southern (Poipu) and western (Polihale) sides of the island are the driest.

Grand Hyatt Kauai Resort & Spa: One of the island’s highest-end properties, the Grand Hyatt recently redid its 565 guest rooms and 37 suites. All have private lanais, pillow-top beds, flatscreen TV’s, and rain showers in the bathrooms. The hotel has a saltwater lagoon where guests can swim and kayak, two freshwater outdoor pools connected by swimming “rivers” and a huge sundeck, plus three tennis courts, and the next-door PGA Grand Slam Poipu Bay Golf Course. The resort has a whopping 11 restaurants and bars, the fanciest of which is Hawaiian-Pacific fusion Tidepools on the lagoon, and a 45,000-square-foot Anara Spa set in tropical gardens with waterfalls and a lava rock soaking tub. The lowest rates we could find in February were $510 for a Garden View Room. This is a Category 6 hotel, so free night redemptions require a minimum of 22,000 Gold Passport points for standard rooms, 27,000 for club rooms, and 33,000 for suites.

Marriott has five, yes five, resorts on Kauai, three of which are Marriott Vacation Club properties.

Kauai Marriott Resort and Kauai Beach Club: This is the classic Marriott hotel on the island, located not too far from Lihue on the southwest coast, so it’s usually pretty sunny over here. This is a very family-friendly resort, so guests can swim at Kalapaki Beach, and in Hawaii’s largest single-level outdoor pool (a perhaps dubious distinction), play at the Kauai Lagoons Golf Course, or relax in the Alexander Spa & Salon. There are also local excursions to Waimea Canyon State Park, Wailua Falls, and adventures like ziplining. Though the buildings are a little dated, the guest rooms look like they’ve been redone recently with crisp white linens and red-orange accents like throw pillows and sofas, and the bathrooms, while they seem small, do look nice with designer-ish sinks and full shower-tubs. It’s also got six restaurants and cafes including a sushi bar. There are also Marriott Vacation Club Villas onsite at the Marriott Kauai Beach Club, in studio, one- and two-bedroom categories with full-size living rooms including fold-out beds, plus kitchenettes. Rates for guest rooms at the hotel right now are starting at $269 a night, while villas at the Beach Club are starting at $234 a night. Both are Category 5 redemptions, requiring between 20,000-25,000 points for free nights, and when booking four consecutive nights using redemptions, the fifth night is free.

Marriott’s Kauai Lagoons: This MVC is actually quite near the Lihue Airport and adjacent to the Kauai Lagoons Golf course. There are only 72 two- and three-bedroom villas with bright, Hawaiian-inspired furniture. The villas include master suites with king-size beds and private baths, open-plan living/dining areas, private lanais, fully equipped kitchens with stainless steel appliances and granite countertops, washer-dryer unites, and flatscreens with DVD players in the bedrooms and living rooms. This is definitely more of a serviced apartment situation since there are no restaurants on property, and just one outdoor pool. Rates start at $470 a night in February. This is another Category 5 hotel with the same point redemption requirements.

The Courtyard Kauai at Coconut Beach:

The final Marriott property on the island is a Courtyard near Coconut Beach in Kapaa on the island’s east side. It was recently renovated to the tune of $13 million, and now there’s a fire pit by the pool, rooms have all been redone with native elements like koa wood. Though construction is done, apparently some recent guests still had no WiFi and said breakfast was subpar for the moment, but hopefully the hotel is on top of that. There are 309 rooms total and they look spacious and pretty standard for Courtyard product. 65% of them have ocean views and private lanais. The hotel has a market, a casual breakfast restaurant, and another open-air restaurant overlooking the pool that’s open for lunch and dinner and serves pupu platters. There’s a mid-size outdoor pool, and the property fronts Makaiwa Beach, which is safe for swimming, and there is also a full-service Pua Day Spa onsite. Rates start at $229 a night this month, or Category 4 redemption options of 6,000-7,500 points per night with the fifth night free.

St. Regis Princeville Resort: One of the toniest resorts on the island, the St. Regis Princeville Resort is built into the cliffs overlooking Hanalei Bay on the northern coast, and has tons of luxury features and amenities in the 252 guest rooms like “privacy glass reveal” windows in the bathrooms that cloud up or clear on demand for views of the scenery. Guests have access to the Makai Golf Club, a 5,000 square foot infinity pool overlooking the ocean, five restaurants and bars including the Kauai Grill from famous chef Jean-Georges Vongerichten, and the Halele’a Spa. One of the resort’s most unique features is its on-staff marine biologist “Ocean Butler” who can escort guests on snorkeling and scuba tours of the coral reef in the bay below the resort. The hotel has also just opened a cabana designed by Trina Turk where guests can spend the day surrounded by the designer’s wares (she designed everything in it from towels to dishes), or use it for a private romantic dinner on the beach. Rates in February start at $450 a night. This is a Category 6 hotel requiring between 20,000-25,000 Starpoints for a free night, or 8,000 Starpoints + $150.

Sheraton Kauai: This resort near Poipu on the sunny south coast has been undergoing a renovation of its public areas including the ocean front pool, and a new poolside bar and restaurant called Lavas. RUM FIRE, the signature restaurant will be open by April. Overall, the resort covers 20 acres with 394 rooms including 11 suites. The rooms look like they’ve had a recent redecoration as well, with plenty of sand- and earth-toned upholstery, dark-wood four-poster beds, marble bathrooms, and other usual amenities like flat-screens, and come with either king or double beds. There is also a Hawaiian Rainforest Spa on the property with specialty treatments, and beach activities including scuba and snorkeling available at the Activity Center with plenty of options for families. Rates in February start at $229. This is an SPG Category 5 property requiring between 12,000-16,000 Starpoints for a free night redemption, or 4,800 Starpoints + $90.

Westin Princeville Ocean Resort Villas: The third SPG property on Kauai is also in Princeville on the north coast, not far from the St. Regis. Villas here come in three categories: studio, one-bedroom and two-bedroom. The studios are a fair-sized 512 square feet, with views of the mountains from their private lanais. The décor is “island-inspired” meaning greens, browns and blues to reflect the forest and the ocean, and all come with kitchenettes with full-size refrigerators and dishwashers, plus microwave-oven combos and glass cooktops so you don’t have to eat out all the time, as well as the convenience of an in-room washer-dryer. Studios have a queen-size bed and a pullout sofa, and a flatscreen with a DVD player. Bathrooms come equipped with Westin Heavenly showers and separate whirlpool tubs. The resort has four pools including a children’s pool, a WestinWorkout Gym, is near both the Makai and Prince Golf Courses and the Princeville Tennis Club, and there are three bars and restaurants plus a general store on property. Rates in February start at $255. This is an SPG Category 5 property requiring between 12,000-16,000 Starpoints, or 4,800 Starpoints + $90.
[card card-name='Citi ThankYou® Preferred Card – Bonus Point Offer' card-id='22145660' type='javascript' bullet-id='1']

Related stories
What are points and miles worth? TPG’s December 2022 monthly valuations
Capital One Venture X to lose Priority Pass restaurants and spa services as of Jan. 1, 2023
December 2022
Current Hyatt promotions: Bonus points on stays and dining plus double stay credits
Featured image by The dramatic cliffs of the Na Pa Li Coast.