Canadian Friendliness at Its Best: A Review of WestJet's 767 in Economy From London to Toronto

Articles
Nicky Kelvin is the director of content and face of TPG UK, and is also an award-winning photographer. Before joining TPG UK, he was a record label lawyer and avid traveler sharing points wisdom as the "Miles Mogul."
Follow
Feb. 07, 2019
•
11 min read 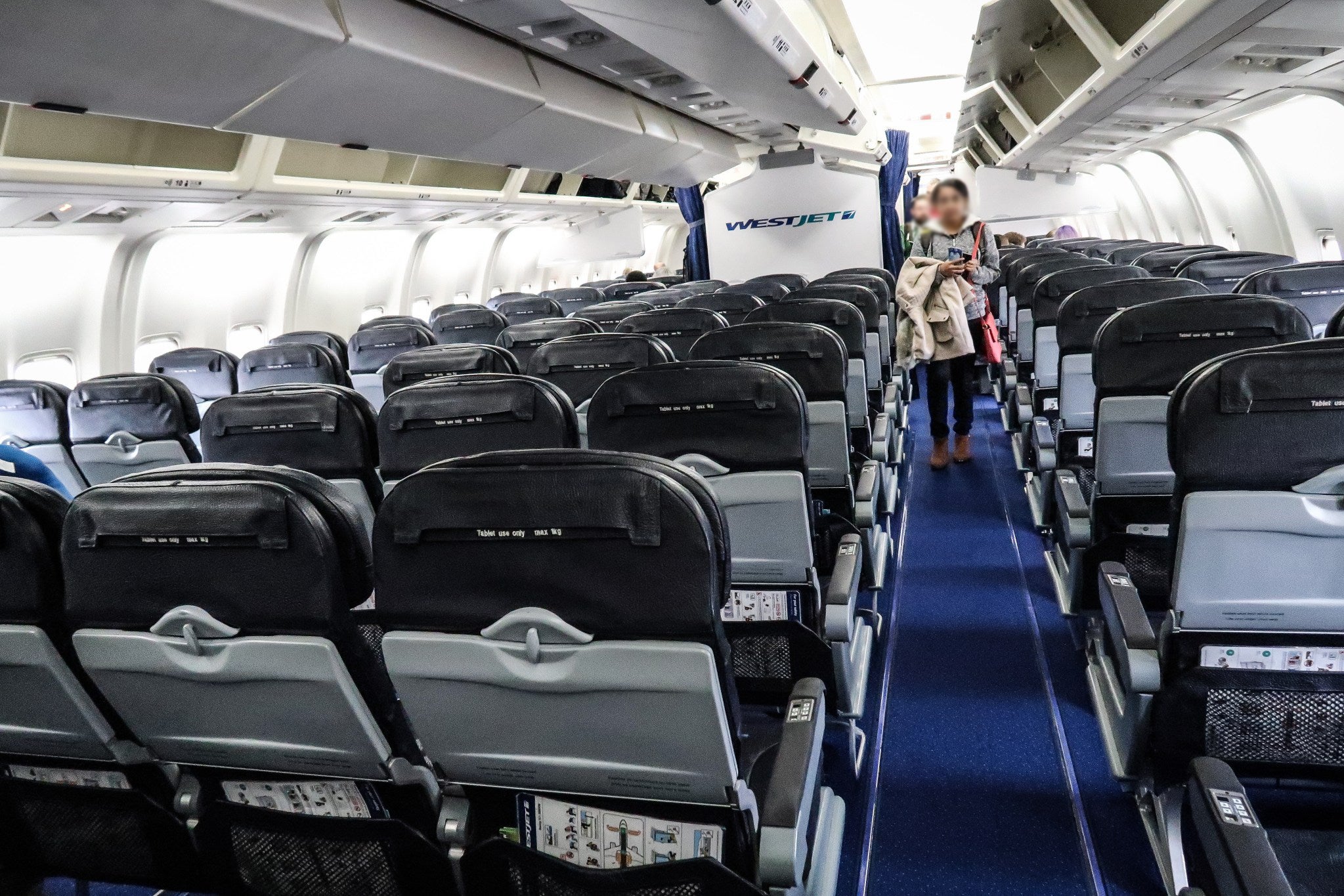 Canadian Friendliness at Its Best: A Review of WestJet's 767 in Economy From London to Toronto
This post contains references to products from one or more of our advertisers. We may receive compensation when you click on links to those products. Terms apply to the offers listed on this page. For an explanation of our Advertising Policy, visit this page.

As director of content for the soon-to-launch TPG UK office, I've been making plenty of trips between my home in London and TPG HQ in New York City. Nonstop flights abound on what's arguably the world's most valuable route, but sometimes those nonstops can be prohibitively expensive, especially when you happen to be looking for last-minute, one-way flights.

I found myself in this exact position on one of my recent trips across the pond. Since I didn't yet know when I'd be returning to London, I booked a one-way flight on from Canadian low-cost carrier WestJet from London to New York via Toronto. Here's what my low-cost transatlantic experience was like.

Like I mentioned above, I needed to cross the Atlantic without knowing the date of my return, so the ability to book a one-way ticket without paying an exorbitant amount of cash was the primary reason behind booking this WestJet flight. My ticket from London's Gatwick Airport (LGW) to New York's LaGuardia (LGA) via Toronto (YYZ) cost a total of $342. We put the purchase on the Platinum Card® from American Express, earning a total of 1,710 Membership Rewards points (worth about $32 according to current TPG valuations) in the process.

Check in at London Gatwick's North Terminal was quiet, quick and littered with superhelpful and friendly staff, who jumped at the chance for a photo shoot. Efficiency-induced boredom, perhaps?

The process was mostly automated, with self-serve check-in kiosks where passengers printed their own boarding passes and baggage tags.

After living out a childhood fantasy of sticking on my own bag tags (perfectly in line, no sticky bits hanging off the edges), my bags were whisked off at the drop point in moments.

Surprisingly, security was also quiet at Gatwick on the morning of my flight, and it only took me a couple of minutes to clear. I headed down to Gate 47, which was at the very end of the terminal, down a large ramp, and veritably in the middle of nowhere. Boarding was swift and efficient. It actually seemed like the group boarding system was adhered to, and I was on board with hardly any standing around.

The interior of our Boeing 767, which was delivered new to Qantas in 1991 and then leased by WestJet in 2015, was dated, but to me it was nostalgic and rather dreamy. Plus, the 2-3-2 seating configuration felt pretty roomy compared to other, more cramped wide-bodies.

I found my seat, the window side of a pair close to the back of the aircraft. I wouldn’t usually choose to sit so far back, but on the evening before departure, I swapped 8C for 35K when the pair both showed as unoccupied. I nestled in, the doors closed, and 35H remained empty!

The lack of a seatmate was a bonus, but regardless, the leather seats, although slightly worn, were very comfortable, with plenty of legroom, and the surrounding areas were clean. For a relatively short transatlantic day flight, the setup was pretty perfect.

With the tray table down, it was spacious enough for working on a 15-inch laptop, although the little girl in front did not recline her seat. Things may have been a little hairier had she fully reclined.

The seat had a double USB socket but annoyingly no standard power outlet for charging my laptop. The premium cabin on this aircraft was the place to be if you wanted to be fully juiced up.

There were two lavatories available at the back of the aircraft, with an additional three at the center. They were old in design, but fine nonetheless. There was basic hand wash and no other amenities of note. They were a bit of a mess when I went in, but it only takes one messy pup to cause this.

There were no amenity kits, pillows or blankets handed out, but there were blankets available for purchase on board for CA$3.99 ($3). Although these things were not provided, I also didn't expect them.

There was an old-school radio entertainment system, which I didn’t test out, but tablets were available to rent. A rented tablet handily slotted into a flap on the seat in front and cost CA$6.99 ($5) for the duration of the flight.

There was a decent selection of movies, and allowing my inner child free rein, I went for "Early Man," which I loved. No tears came on this flight, thankfully!

Since I also had a connecting flight to New York, I purchased a 24-hour Wi-Fi pass, which cost CA$32.99 ($25). The connection was sufficient for messaging and emails but struggled with much beyond that.

The crew were out in force once we were at cruising altitude. WestJet provided complimentary soft and hot drinks, and cookies and pretzels — a nice touch for a low-cost airline, but resulting in desperate times for an unprepared traveler on an eight-hour flight. As I was near the back of the cabin, they reached me around 45 minutes after takeoff.

Thankfully, there were plenty of snacks and meals available for purchase.

I went for the butter chicken with rice, which arrived steaming hot in a neat box, and was actually rather delicious. The rice was light and fluffy, and the chicken was perhaps a tiny bit on the tough side, but the flavor was great.

I wasn’t ready to eat right away when they took the orders, but they let me order after a couple of hours and prepared the hot meal when requested. I’m not sure how happily they would have accommodated me had the flight been very busy, but they didn’t flinch at the late request.

I loaded up on snacks midway through the flight when the second service came around, and after a slight mishap involving coffee being delivered instead of tea (a horrifying experience for a Brit), I settled down to a Kit Kat and the various WestJet freebies.

The crew was immediately friendly as we were boarding. It was service that set WestJet apart from the others. The efficiency, friendliness and willingness of the staff to assist and engage really made this otherwise low-cost product feel like something that a legacy airline would offer. Nothing was too much trouble.

My experience on the ground in Toronto gave WestJet a chance to prove themselves again. Due to weather conditions in New York, we had a failed departure and returned to the gate. My connecting flight to LaGuardia was canceled.

At first, WestJet staff seemed overwhelmed. The phone lines were jammed, and no one in the airport was willing to help. I booked myself on another airline the following afternoon, but when jet lag woke me at 5am and I tried the WestJet call center again, the agent could not have been friendlier and more helpful. She managed to get me on an earlier flight to New York, had a real laugh with me and seemed genuinely sympathetic and delighted to have got me out of my situation. She said it was the WestJet way, and from everything I saw over the previous 24 hours, I was inclined to believe her.

I’ve found some similar airlines might view passengers as an inconvenience or a herd who must be sold to and milked for every penny, but that was not the way I was left feeling whatsoever after my WestJet flight. It was a combination of a reasonable fare for a one-way flight, good technology and a solid experience, both on the ground and in the air, for this seven-to-eight-hour daytime flight across the pond.

If my priority was cost, and even if the cost was negligible compared to some other airlines (once all additional fees for baggage, food, etc., were thrown in), WestJet would remain a strong contender for my business.