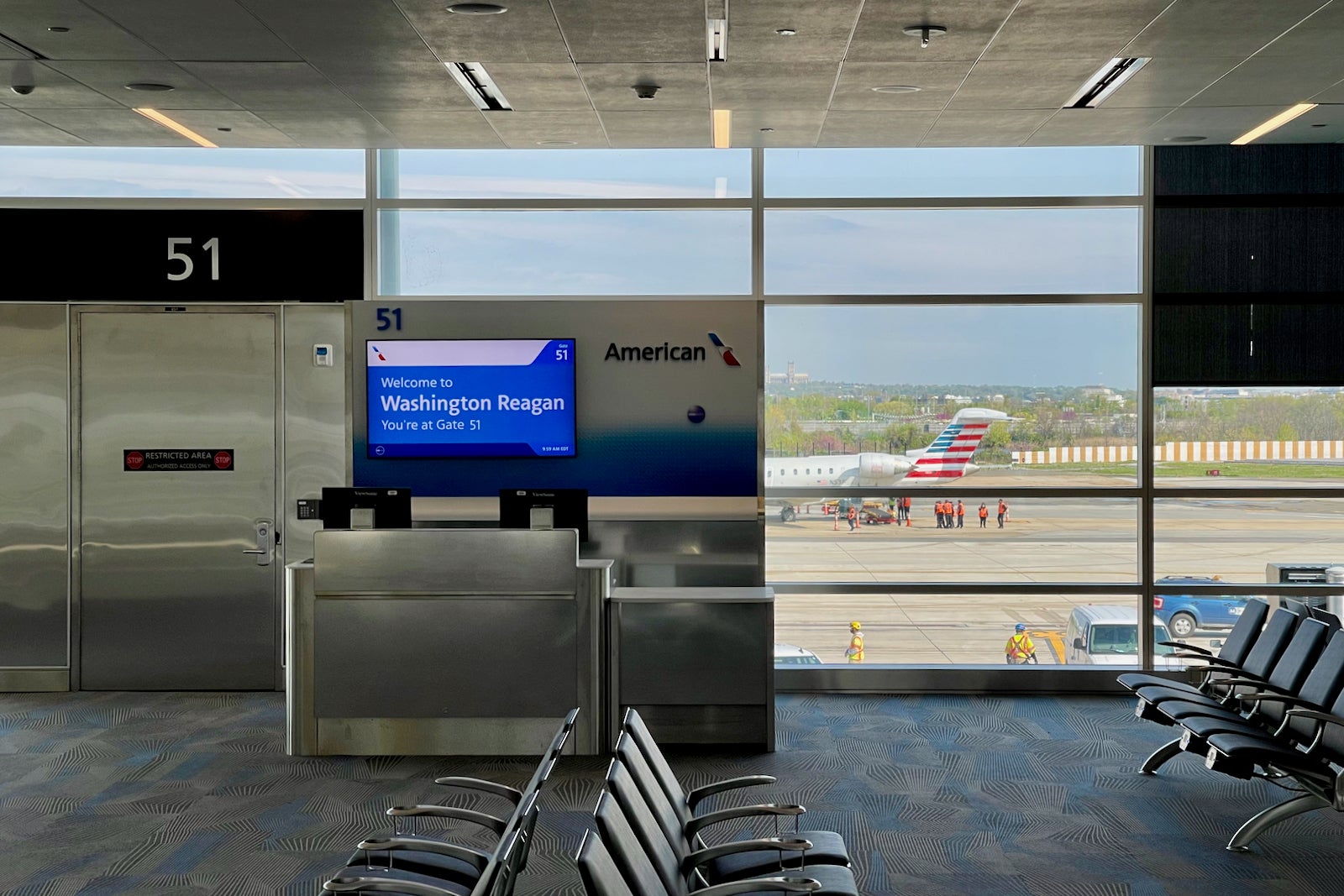 It’s finally here. The long-awaited replacement for what was possibly the worst gate in the country.

On Tuesday, April 20, Washington D.C. airport authorities, along with American Airlines, will inaugurate a brand-new concourse at Reagan National (DCA), marking the first major improvement the airport has seen in more than two decades.

The 14-gate terminal replaces the universally despised and notoriously overcrowded Gate 35X, a ground-level bus operation that served 14 remote stands for regional operations that saw more than 250,000 flights during its tenure.

230,000 square feet later, and each regional aircraft will get its own jet bridge and terminal waiting area. For most flyers, that’d be enough to call the new concourse a massive improvement.

But that’s not all. There are modern restrooms and extra concession spaces, as well as a new 14,000-square-foot American Airlines Admirals Club with views of downtown Washington, D.C. opening next year.

Goodbye to the bus ride

Let’s take a look inside.

Getting to the new concourse requires walking down a long connector hallway that bridges DCA’s north pier with the new gates, numbered 46 to 59.

Once in the new concourse, the first thing you’ll notice is all the open space, with high ceilings that provide plenty of natural light. Compared to the cramped and crowded Gate 35X hold room, this feels like you've landed in Singapore’s Changi Airport.

Each gate area is equipped with a variety of seating arrangements, including benches, standalone swivel chairs and high-top tables.

Most seats feature two power outlets and two USB-A ports to give flyers some last-minute juice.

The high-top tables — more of which are on their way — each have four Qi wireless charging pads for supported mobile devices, like the latest iPhone 12 Pro.

There are two main gate areas in the new concourse.

The central one holds four gates, 46 to 49. This is also where you’ll find the brand-new, upper-level Admirals Club when it opens next year, pending any further pandemic-related delays.

You’ll find some of the best views of Washington D.C. from the north-facing gates here, 47 and 49. I particularly enjoyed gazing out the window while sitting in one of the supremely comfortable royal blue recliner chairs.

On a clear day, you can see the Washington Monument in the distance, as well as jets departing on runway 1.

The ten remaining gates are located all the way at the end of the pier.

Connecting the two main gate areas is a long hallway, with a set of restrooms, a pet relief area, a mother’s care room and an American Airlines customer service counter.

Though the new bathrooms aren’t as nice as what you’ll find in Denver’s latest concourse expansion or Salt Lake City’s new terminal, they’re still a massive improvement compared to the old ones at DCA.

There are plenty of stalls and urinals, as well as touchless sinks, soap and paper towel dispensers.

(There’s another set of restrooms just as you enter the new concourse, but those weren’t ready for the media tour.)

The remaining gates — 50 to 59 — are arranged around the perimeter of a square, with plenty of seating in the middle.

American’s managing director of DCA operations, Radney Robertson, told TPG that along with the new concourse, the carrier will upgauge all regional flying to two-cabin aircraft, such as the 65 seat CRJ-700, and 76-seat CRJ-900 and Embraer E175.

There’s room for over 850 passengers in the new concourse, so the larger regional planes and added frequencies shouldn’t lead to overcrowding.

And don’t worry, Robertson reassured TPG that Gate 35X is being permanently decommissioned — in its next life, it’ll become support space for airport operations.

As Paul Malandrino, vice president and airport manager for the Metropolitan Washington Airports Authority (MWAA) told TPG, “come Tuesday, a passenger coming through here should expect not to have to ride a bus. Simply go through screening, enjoy the new seating, the pet relief area, nursing room, concessions, and when it’s time to get on the airplane, you walk right through the jet bridge — you don’t have to go outside in the weather.”

Concessions are limited for now

Like many other airport infrastructure projects nationwide, this one is opening early, thanks to an accelerated construction timeline due to the pandemic.

For now, the concourse is in a “soft opening,” which means that food and beverage options will be limited at first, according to Deven Judd, director of customer and concessions development for MWAA.

To start, there will be just two concessionaires, WHSmith and a small Peet’s Coffee stand, offering travelers just the essentials, like packaged snacks and hot drinks.

In July, five other retailers and restaurants will open, including InMotion Entertainment and Wolfgang Puck Bar & Bites, in the hopes that passenger traffic will be increased by then.

“We are trying to give our concessionaires an environment to be successful. The number of people, number of passengers [passing through the terminal] affects that,” explained Judd.

More food options and retail outlets, like Timber Pizza Company, Elevation Burger and D.C. Originals by WHSmith are planned for the future, but there’s no firm opening date yet.

At the outset, if you’re looking for hot food or other options, I’d recommend purchasing items before security or in the north pier, before walking to your gate. Travelers should expect prices at or around 10% more than average street pricing.

All in all, the new terminal is a massive improvement compared to Gate 35X that it replaces. Not only does each regional jet get its own gate, but there are plenty of flyer-focused features too, like abundant power outlets and modern restrooms.

The next stage includes two new security checkpoints, relocating the main National Hall into the airside area for streamlined connections. That work is now due to open in late 2021, more than a year behind the original 2020 target. (An American Express Centurion Lounge will then open in the airport the following year.)

Until the new security checkpoints are complete, a handful of American Airlines regional jet flyers will still have to take the bus when connecting to the south pier.

But once complete, all of DCA's buses will return to where they belong — in a bus terminal, no longer shuttling passengers to and from the plane in one of the nation’s busiest airports.