Not your typical W: A review of the W Miami in Brickell 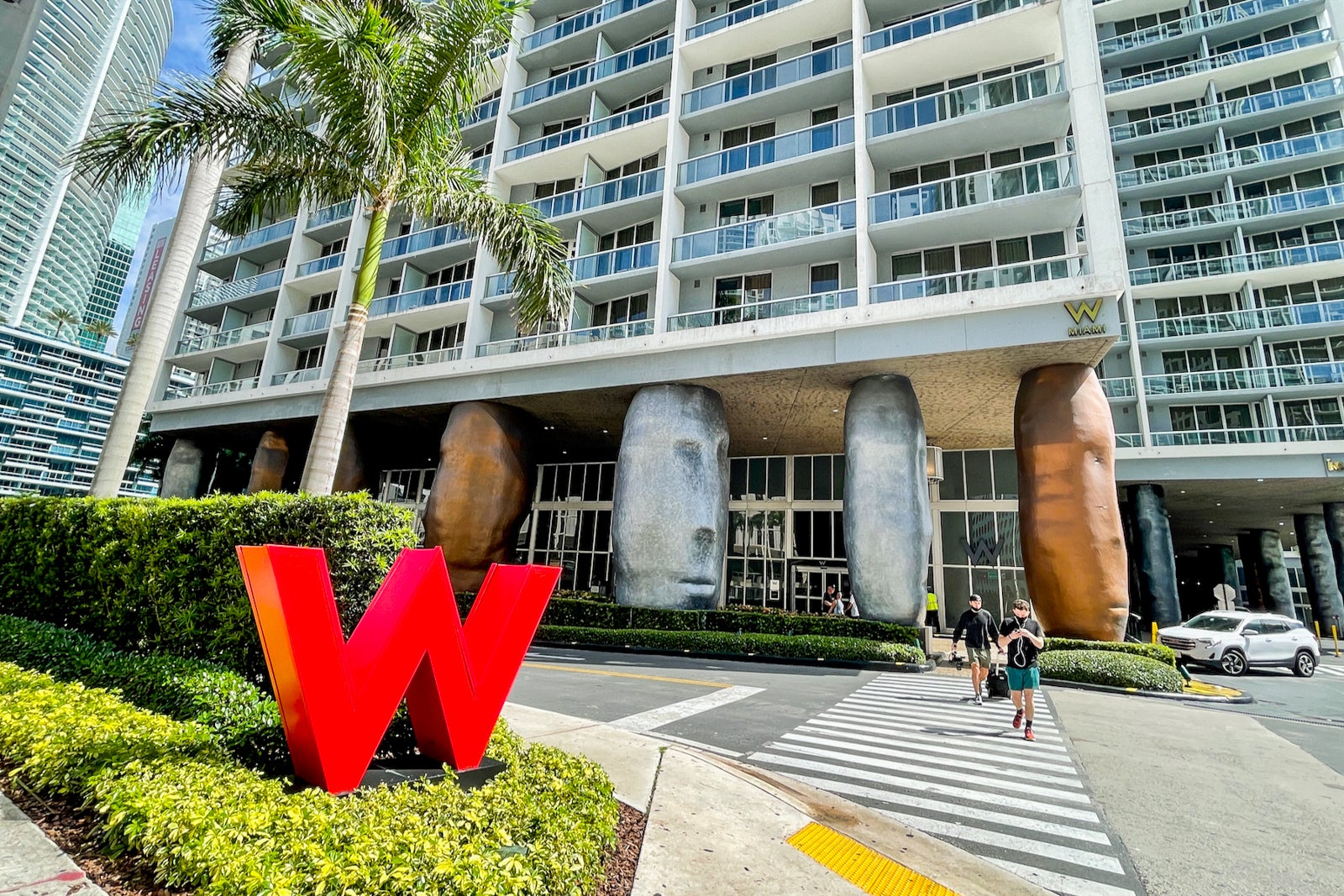 2022
This post contains references to products from one or more of our advertisers. We may receive compensation when you click on links to those products. Terms apply to the offers listed on this page. For an explanation of our Advertising Policy, visit this page.

Many travelers don't realize that there's much more to Miami than just South Beach. For those that want to skip the crowds and hang with more locals, the Brickell neighborhood in Downtown Miami could be a great alternative. While you don't get direct beach access, there are terrific dining, nightlife and entertainment options and you're closer to popular neighborhoods like Wynwood and Little Havana.

On a recent trip to the area, I decided to spend my first two nights in Brickell and stayed at the W Miami. This is one of three Ws in South Florida; there's a newly renovated one on South Beach and another up in Fort Lauderdale, though this is the smallest of the bunch with only 118 rooms.

Here’s how my stay went.

Paid nights start at around $299 but often hover around $400 per night before taxes. So, paying with points yields a redemption rate of around 0.8 cents per point, which is on par with TPG valuations.

Another perk of staying in Brickell: The W Miami doesn't charge a resort fee like the hotels on the beach do.

The W Miami is located right off Brickell Avenue and shares many facilities with the Icon Brickell apartment complex. It's a five-minute walk to the Brickell City Centre, where you will find four levels of high-end shops and restaurants, as well as a dine-in movie theater. There's also Sugar, the city's hottest rooftop bar, on the 40th floor of the Brickell City Centre’s East hotel.

If walking is not your thing, you can get around using readily available shared bikes and scooters. Alternatively, free public transportation is available via the Metromover and trolleys. Of course, ride-sharing is also an option, but there can be a lot of traffic during rush hour.

Related: The best ways to get to or from MIA

The lobby (or Living Room, as they like to call it at the W) was relatively small, with limited seating and no bar. It was also much brighter than your typical W Living Room.

I arrived at the hotel at 10 a.m. and was able to get a room right away — a full six hours before standard check-in. There was never much of a line when I passed the front desk.

I was assigned a standard Wonderful King room on the fifth floor. The room was decorated with an Asian flair, featuring a bold celadon palette, lamps in the shape of foo dogs and a painting of a crane.

Stepping into it, I was immediately impressed with its size. The 440-square-foot room opened up to a long corridor with green, black and white marble floors.

To the left was a set of double doors that opened into the bathroom. The bathroom featured a double vanity, a large mirror and a whole lot of marble.

The shower was a walk-in with a single showerhead. As is now the norm for Ws, toiletries were provided by Davines and its sister brand Skin Regimen.

Back in the hallway, there was a gigantic wooden wardrobe that housed the safe and plenty of storage and hanging space. More storage space, along with an iron and ironing board, was available in a small closet on the other side.

There was also a small kitchenette with dual electric burners, a microwave and an empty minifridge. The coffee maker and minibar items were removed as a response to the pandemic. Instead, snacks and drinks were available for purchase at the front desk.

The bed was very comfortable, dressed in crisp, white linens with four pillows (the decorative pillow has been removed as a part of Marriott's Commitment to Clean program). There were nightstands and lamps on both sides of the bed, but only one side had power outlets.

The TV remote came in a bag and there were also disinfectant wipes available for personal use.

Opposite the bed was a comfortable workspace with easily accessible power outlets.

My room at the W Miami came with a balcony. While I enjoyed working from there, I did wish that I were on a higher floor and didn't face the street. Luckily, noise wasn't much of an issue when the balcony door was closed.

The highlight of the property was the massive 15th-floor pool deck, which was shared with the Icon Brickell apartment complex. There was a total of three pools: a wading pool, a large hot tub and a lap pool.

Chairs and cabanas were free for all guests on a first-come, first-served basis. Poolside service was available from the hotel's restaurant Addikt (more on that soon), but only from Thursday through Sunday due to the reduced hours. And unfortunately, I wasn't allowed to bring outside food or drinks the days the restaurant was closed.

Also on the 15th floor was a small, makeshift gym exclusively for W guests. While it worked fine for me, I later found out that I could have trekked to a much larger gym in one of the Icon Brickell buildings.

The Icon also has what looks to be a beautiful spa, though it was closed due to the pandemic.

Wi-Fi was free for all guests and performed well in my room. I just wish it would have worked better by the pool.

While there wasn't a lobby bar, on the opposite side from the front desk was Panther Coffee, which is a local coffee chain. It was open daily and served a variety of drinks and pastries. Marriott Platinum and Titanium elites that chose breakfast as their welcome amenity could pick up one coffee and two breakfast items here.

The hotel's main restaurant, Addikt, was located on the 15th floor by the pool. Due to the pandemic, it was only open from Thursday through Sunday. In-room dining was also limited to these days only.

It offered great views from both inside and the socially distanced outdoor patio.

It's usually open for breakfast, lunch and dinner and serves mostly American cuisine, such as salads, burgers and chicken sandwiches.

For breakfast, the only option available was a buffet (served by employees). It cost $26 per person and included items like scrambled eggs, waffles, pastries, cereals, fresh fruit and yogurt.

Related: How to get free hotel breakfast

While I didn't have a chance to dine in, I did enjoy a poolside lunch from Addikt. I had a Beyond burger ($18) and piña colada ($15), which were both great, albeit on the pricier side.

Although the on-site dining options were limited, there were a ton of terrific restaurants nearby, such as Komodo, Cipriani and Luna Park. I also had a tasty outdoor lunch from the food trucks parked behind First Presbyterian Church, next to the hotel.

Related: The 18 best places to eat and drink in Miami

All of the staff members I interacted with at the hotel were friendly, but there were some service hiccups. For instance, I requested housekeeping (currently only available by request) one day, but they never came. The wait was also quite long when calling the front desk even though occupancy was low. In fairness, it's likely that the pandemic forced the hotel to reduce staffing.

The W Miami is not your classic W experience. There was no swanky restaurant or lobby bar with DJs spinning at night. That being said, the pool deck was awesome, the room was spacious and the location was great (for those that don't need to stay on the beach). I would consider staying here again, especially if I can get a good deal using points, though I hope that operations will be back to normal by then.

Related stories
Another major cruise line to sharply hike onboard fees
Save money with these travel-related offers on your credit cards this month
Use these shopping portal bonuses to earn extra miles this holiday season
Using miles and points to book airline tickets and hotels for others
Featured image by (Photo by Benji Stawski/The Points Guy)
Editorial disclaimer: Opinions expressed here are the author’s alone, not those of any bank, credit card issuer, airline or hotel chain, and have not been reviewed, approved or otherwise endorsed by any of these entities.