Past Its Prime: United (757-200) in Economy From Newark to San Francisco 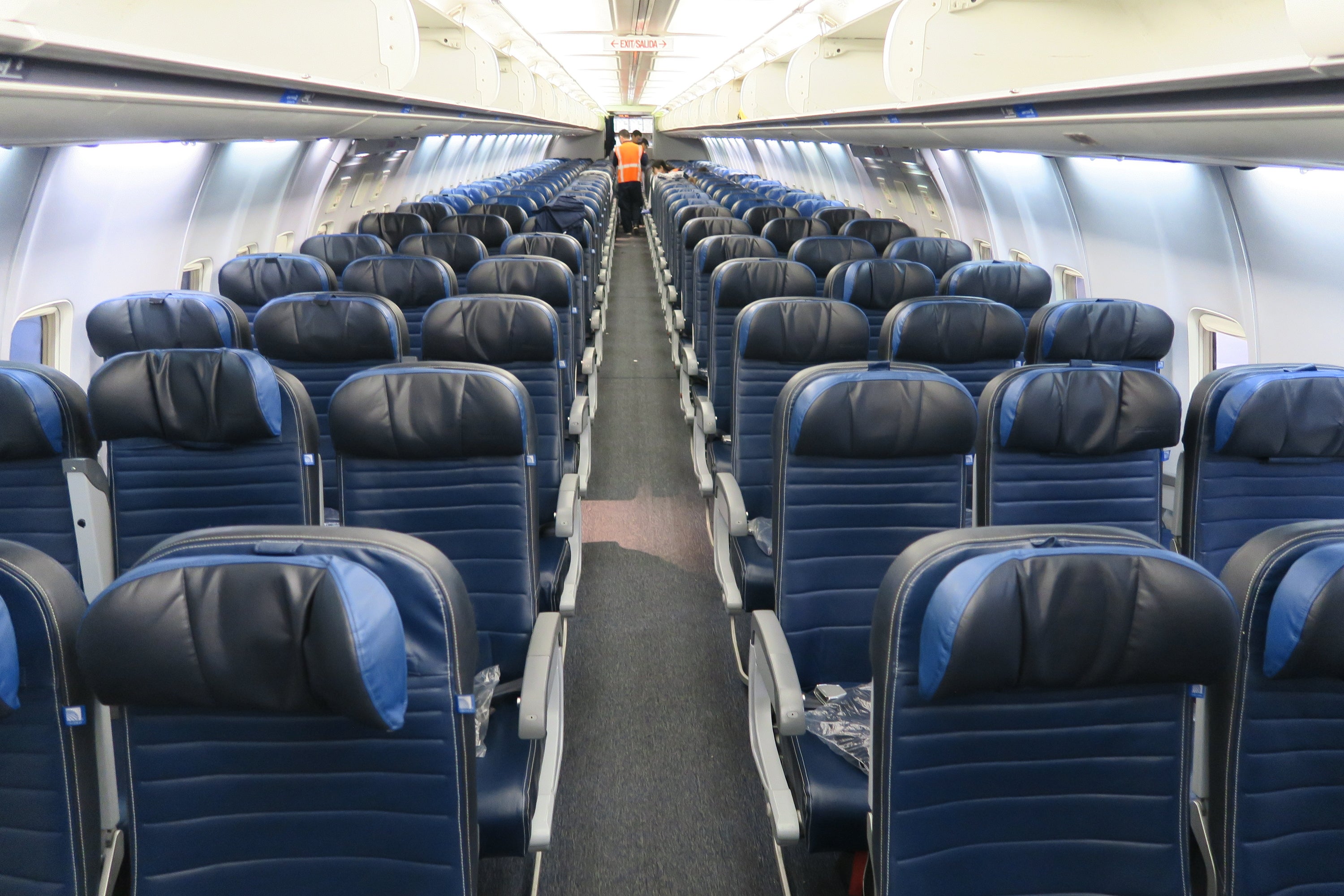 Past Its Prime: United (757-200) in Economy From Newark to San Francisco
This post contains references to products from one or more of our advertisers. We may receive compensation when you click on links to those products. Terms apply to the offers listed on this page. For an explanation of our Advertising Policy, visit this page.

United operates around 14 flights daily between its hubs in Newark and San Francisco. This United route is operated mostly by 757-200 aircraft — the particular plane for my flight, N14118, has been a workhorse in United's fleet. In the last three months, this aircraft has flown throughout the continental US, to Hawaii, to Europe and to South America.

Here's my take on United's 757-200 economy product between Newark (EWR) and San Francisco (SFO) on this aircraft.

TPG booked this flight seven days before departure for 12,500 United miles (worth $163 based on TPG's latest valuation), a security fee of $5.60 and a $50 close-in award booking fee. The close-in booking fee was $50 instead of $75, since a Premier Silver elite booked the flight for me. TPG used the Platinum Card® from American Express for this booking to earn 5 Amex Membership Rewards points per dollar spent on the $55.60 charge. But if I'd booked this flight myself, I would have used my Chase Sapphire Reserve to earn 3 Chase Ultimate Rewards points per dollar spent while also getting the card's excellent trip protections.

Checking in online was easy with my last name and reservation locator. At EWR, the economy check-in areas on the second level were filled with kiosks. The check-in process consisted of two steps: using a kiosk to check in, tag your bag, print your boarding pass and pay for any extras; and dropping your checked bag with an agent.

When I checked in, the kiosk said my 1pm flight would be delayed to 1:36pm because of a late aircraft from Manchester, England (MAN). However, the kiosk still stated the original boarding time of 12:10pm.

When I arrived at the gate shortly before 12:10pm, passengers were gathering in the gate area, but there wasn't an aircraft at the gate.

Since I was reviewing the flight and didn't want to miss any announcements, I waited around the gate area. The first announcement I heard was at 12:27pm saying that the aircraft had arrived but needed to be towed from the international terminal. The next announcement was at 12:40pm notifying passengers that lightning in the area delayed the towing process. The aircraft arrived at the gate at 1:04pm, and the crew boarded at 1:09pm. At 1:12pm the departure time was pushed to 1:50pm for severe weather conditions, but no update was provided regarding boarding time.

Boarding began at 1:21pm without any announcement when a large group of marathon runners boarded. Once the runners were on board, preboards were called, and then Group 1 was called.

Although Group 1 was supposed to only be elite members and customers seated in premium cabins, this group contained more than 40 people. Looking around, I saw many passengers boarding during Group 1 with Group 3 and Group 4 boarding passes. And no, they didn't seem to be traveling with someone in Group 1.

On arrival into San Francisco, the taxi to the gate took only nine minutes. By the time I deplaned and reached baggage claim, my bag had already been pulled from the baggage carousel. So I needed to show my claim check to get my bag from a United employee.

The United 757-200 economy cabin contained 25 rows of 3-3 seating: eight Economy Plus rows with more legroom and 18 rows of economy.

My seat, 38A, was an economy window seat near the back of the aircraft. The width between armrests was 17.75 inches and the seat pitch was 31.5 inches. The seat was surprisingly comfortable, even considering that I sat in it for about seven hours.

Each seat had a headrest with bendable wings to support a head or neck. The headrest height was adjustable.

The seatback pockets were large and didn't let items slide out the sides.

The seats were comfortable enough for sleeping, relaxing and watching entertainment. But I found it difficult to type comfortably on my laptop due to the 31.5-inch seat pitch. Before the passenger ahead of me reclined, I was somewhat comfortable angling myself against the aircraft wall and typing with my laptop on the tray table. But once he reclined, the space became too tight to type and I had to work with my laptop tilted on my lap. Seats reclined 5.5 inches, so the seat pitch when the passenger ahead of me reclined dropped to 26 inches.

The seat of the passenger ahead of me seemingly wouldn't lock. So the seat would move back a few inches each time he sat back in the seat and moved forward a few inches every time he leaned forward.

The aircraft was delivered new to Continental Airlines in 1997. Although it has certainly been refurbished multiple times, it was showing its age. The seats and cabin felt really worn. Here are a few examples of the wear:

There were two lavatories in the back of the economy cabin and one lavatory ahead of Economy Plus that were accessible by economy passengers. I only used the lavatories at the back of the aircraft, but these lavatories were notably dated with a flush-lever toilet and separate hot and cold water levers that needed to be held down. Both lavatories were relatively large for a domestic economy bathroom, though.

A plastic packaged blanket waited in each seat at boarding.

The blanket was thin but soft and relatively warm. Strangely, my blanket smelled of vinegar though.

Complimentary ear buds were handed out to passengers who needed them 30 minutes after takeoff. I tried out the earbuds but found the sound to be muffled and mildly distorted. When I took off the earbuds, one of the plastic pads fell off.

There was a seatback IFE screen at each seat.

The 8.75-inch diagonal length screen could be tilted but didn't have good resolution. The screen was on at boarding but was turned off from pushback to about 30 minutes after takeoff.

The following types of entertainment were available on the IFE screen:

Power outlets were available between seats, so three seats shared two outlets, but the power stopped working about halfway through the flight.

I bought the full-flight package for $33.99, and the Wi-Fi initially performed well with 4.56 Mbps download and 0.93 Mbps upload. But I disconnected for the drink and snack service and, although I was able to successfully reconnect, I wasn't able to completely load anything for the remainder of the flight.

Without buying the Wi-Fi, you could connect and watch movies and TV on your own device.

The selection available on my own device contained some of the same options available on the seatback IFE, as well as some extras.

I was able to watch this content on my tablet after connecting to the network and signing into the United app. So, if you want to watch content on your own device, be sure to install the United app and know your United loyalty account details before boarding. Otherwise, you'll see a puzzle piece symbol, meaning you don't have the correct software.

Although I was on board for about seven hours, no complimentary meal was provided in economy. The seatback magazine listed the following snacks available for purchase on flights scheduled to be longer than one and a half hours:

Additional lunch and dinner options were available for $9.99 on flights scheduled to be longer than three hours:

The food cart reached me 90 minutes after takeoff. I ordered the pepperoni deep-dish pizza, which the flight attendant pulled out of a compartment in the food cart.

Although the pizza was barely warm, it was surprisingly tasty. I'd still recommend eating before the flight or bringing your own snacks, but I didn't regret ordering the pizza.

Various nonalcoholic drinks including sodas, juices, coffee and tea and miniature bags of pretzels were available free of charge. There was a drink service about 100 minutes after takeoff and another drink service about 80 minutes before landing, but flight attendants also came through the cabin with trays of water three times between these full services.

If you wanted an alcoholic drink, the following were available for purchase:

Only purchases made with credit or debit cards were accepted on board. But if you used the United Explorer Card, you saved 25% on your onboard food and drink purchases.

The flight attendants were friendly to passengers, especially those with children. Twice during the flight, I heard the call button ding, so I looked up and noticed that a flight attendant was at the passenger's seat within 10 to 15 seconds.

Drink service was slow and trash collection mistimed on this flight, likely partially due to the flight being completely full. A few minutes after the departure meal service, a flight attendant came through to collect trash, but then didn't come through again until an hour later.

The most disappointing part of my transcontinental flight with United was the worn aircraft and tight seat pitch that made it difficult to work on my laptop. There are benefits to older aircraft though: The seats have more cushioning than new aircraft, and there's still seatback IFE. But there are many options when traveling between the New York area and the San Francisco Bay. So I wouldn't pick United again if other options fit my schedule and budget.