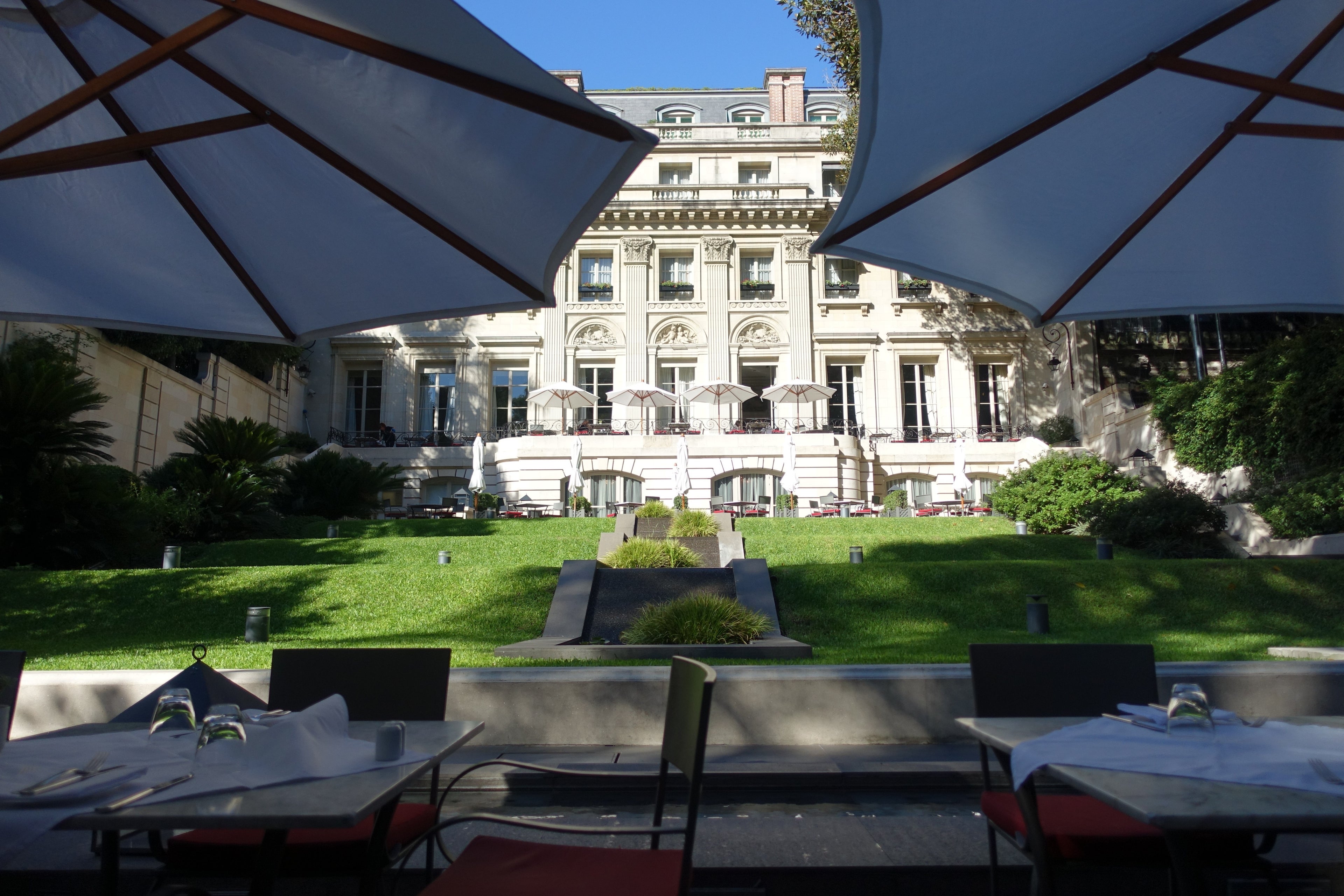 When I planned two stays in Buenos Aires (before and after a trip to Patagonia), I thought it would be fun to test out the Palacio Duhau - Park Hyatt Buenos Aires both times. I wanted to compare my two separate stays, as one would be while I was still a Hyatt Globalist and the other after I'd lost top-tier status and was downgraded to an Explorist. How would my stays compare? Read on to find out.

The hotel features two separate buildings: a restored Neoclassical palace and a contemporary building, connected by gardens and an underground art gallery. My first stay was before Feb. 28, the day my Globalist status (sadly) expired. I booked this stay at the prepaid cash rate of $411.10 per night on Hyatt's mobile app, reserving a King Garden Deluxe room in the contemporary building, the lowest room category. I noticed the king rooms in the palace were going for about $100 more. Since I had recently updated my Hyatt card, upgrading to the new(ish) Chase product, I used that to prepay for the room.

I wanted to book via Amex Fine Hotels & Resorts, but it was about $100 more, and since I was still a Globalist, I knew I would get perks like complimentary breakfast and a room upgrade. I ended up earning 5,771 Hyatt points for the two-night stay, plus a 1,000-point bonus, thanks to Hyatt's most recent promotion. For my second stay as an Explorist (RIP my Globalist status), I used 20,000 Hyatt points per night. Cash rates were in excess of $500 per night for the lowest room category, so I was glad I had points to use for this stay.

Even though Buenos Aires and Argentina as a whole is a bargain destination for US-based travelers, staying at the city's best hotels will still cost you a pretty penny. However, this Category 5 property is a relative bargain on points at 20k apiece. Plus, World of Hyatt is a 1:1 transfer partner of Chase Ultimate Rewards, meaning that if you sign up for the Chase Sapphire Preferred Card and take advantage of its 100,000-point sign-up bonus after spending $4,000 in the first three months of account opening, you could pay for three nights at this property just for signing up.

The Palacio Duhau dates back to 1932, inspired by Le Chateau des Marais in France. Privately owned by a family until 2002, it was sold to a developer, which, in partnership with Hyatt, sought to retain all the building's glory while also creating a contemporary space suitable for the Park Hyatt brand. The Palacio Duhau - Park Hyatt Buenos Aires opened as a hotel in 2006 with a "contemporary" building -- the Posadas Tower -- and the restored palace. Today, two beautiful mansions (not related to the hotel) flank the property. I was told by two different staff members that the Vatican owned one of the mansions, but I couldn't actually confirm this.

The hotel is nestled in the Recoleta "barrio" of the Argentine capital, which is considered the city's most upscale neighborhood. Specifically, the hotel occupies a spot on Avenida Alvear, which is synonymous with luxury -- numerous high-end fashion houses have locations on the street. I felt more than comfortable walking around the very European-feeling area with its Beaux-Arts architecture and numerous cafes nearby. The hotel is also within walking distance from the cemetery where Eva Perón is buried, which is called the Cementerio de la Recoleta. Anything that wasn't within walking distance, I could take a taxi or an Uber to -- and Uber was extremely affordable.

I figured that Uber was so affordable, though, because it wasn't actually very good. Two out of seven drivers insisted I pay cash, and a few others didn't even show and canceled after several minutes of me waiting.

Buenos Aires Ezeiza airport (EZE) was about a 90-minute drive away -- we got stuck in traffic en route to the hotel. However, when traveling domestically within Argentina, I flew out of the smaller Jorge Newbury Airport (AEP), which was about a 15-minute drive from the hotel.

You could either enter on the palace side (which is where my taxi dropped me off) or the contemporary side of the hotel -- each building has its own reception desk. After the long flight and long taxi ride, it was a lovely experience to step into the beautiful palace building.

My Globalist status was immediately recognized, and check-in was quick and painless. I was notified that I had been upgraded to an executive suite in the other modern building -- a $900 value, more than double the cost of the room I’d booked.

I was escorted through the bar, outside and down the stairs, through the palace gardens and the other restaurant to get to the modern building. It was a beautiful walk, and though it wasn't ideal for anyone with mobility issues, there was another route that passed through the art gallery that was wheelchair-accessible.

Pro tip: Make sure to show your passport at check-in even if you aren’t asked, as foreigners save 21%. This is because foreigners are exempt from the VAT.

Suite (as a Globalist)

The first thing I noticed about the executive suite was the welcome amenity: a bottle of wine and macarons.

While the suite was beautiful and had a very comfortable king bed, as well as separate living area, workspace and even a small powder room, it wasn’t practical for a number of reasons.

The light switches worked with a delay, and I had to hit a switch multiple times in order for the light or shade to respond. The system was counterintuitive, as it wasn’t well-labeled, and I found myself constantly banging switches in hopes of getting some light. The technology fails continued: There were virtually no outlets in the bedroom -- there were only two for the entire bedroom. The alarm clock did have a USB port, but it took unusually long to charge -- I ended up having to unplug the alarm clock in order to plug my phone in. There were more plugs in the office area, but I like to have my devices plugged in at night near the bed, so it was a little annoying.

The bathroom was large and comfortable, except for the sink. It had very little water pressure, and the faucet was so low my hands touched the sink while washing –- a serious design flaw. The shower made up for it, though, passing the TPG shower test with flying colors (TPG's 6 feet, 7 inches tall), and it had great water pressure. The amenities had a light cedar scent and were designed by Celedonio Lohidoy.

However, the suite was created in a typical sleek, Park Hyatt style, modern and understated. I did like having the extra space, especially the workspace, and we used the living area by having friends over for drinks. The views overlooked the gardens, and I appreciated the greenery. Having a Nespresso machine and capsules was a nice touch too.

Although the suite came with slippers and robes, the robes were too small for me (this was a trend I noticed all throughout Argentina)!

Room (as an Explorist)

My welcome amenity as an Explorist was a few delicious chocolate-chip cookies. At first glance, the room seemed a bit more special, in a quaint building with a little more character.

But with the charm came the unpleasant quirks of an old building with old plumbing -- it took almost five minutes for the hot water in the shower to come through. Filling the bathtub took 41 minutes!

The room also had the same technology faults that the other suite had, like no outlets near the bed, though the rest of the space featured more outlets in general than the bedroom of the modern suite, which was surprising. The views were nonexistent (we looked directly at a wall), but at least plenty of light came in when the shades were open.

One of the most unique features of the hotel was the underground art gallery, the Paseo de las Artes Duhau, which featured collections from both local and international artists.

The gardens were also stunning. They made for beautiful place to relax outside for drinks or food. Besides that, the beautiful Oak Bar was a great hangout spot, and there was an Italian restaurant, Gioia, in addition to the Duhau Resutaruant & Vinoteca, which featured 7,000 bottles of Argentinian wine.

The staff was both friendly and helpful. I left my toiletries bag in the first room by mistake, and when we arrived back for our second stay it was immediately brought to me. My bags were waiting in my room when I arrived for my second stay. The hotel's turndown service was also lovely.

The property also featured an indoor pool, a fitness center and a spa.

I found the room service to be fast. I ordered at 3:28pm, and it arrived in less than 20 minutes, at 3:47pm. The food was good and reasonably priced.

Breakfast wasn't very exciting for a Park Hyatt. In fact, the buffet selection was meager compared to the other Park Hyatt properties I've stayed in. I had a choice to eat the buffet and order a la carte, but nothing really stood out to me.

However, it was nice to eat breakfast outside in the gardens. Although it may have been chilly for some, I loved being out in the fresh air, and it was quieter than the indoor dining area.

When I left the hotel at 3am to catch my flight, there was no doorman available and I had to hail my own cab -- though under the watchful eye of a security guard.

If you love evening cocktails outdoors, this is your place. The grounds of the Park Hyatt Duhau were beautiful, and the mix of traditional and contemporary was just right. Service was amazing and helpful.

Although I got a comfortable rest during both stays, I was surprised at the lack out outlets, especially in the modern Posadas Tower. However, staying as Explorist was better than I thought -- the main perk I missed out on was breakfast and a better upgrade (although breakfast wasn't that great anyway). Had I booked with Amex FHR instead of using points, I could have gotten the breakfast perk, at least. But if you can't get breakfast included, jump in a cab and head to Palermo (a 10-minute ride) and eat breakfast at Cocu -- it was delicious.

I would consider staying here again, but would definitely bring extension cords to plug all my devices into.