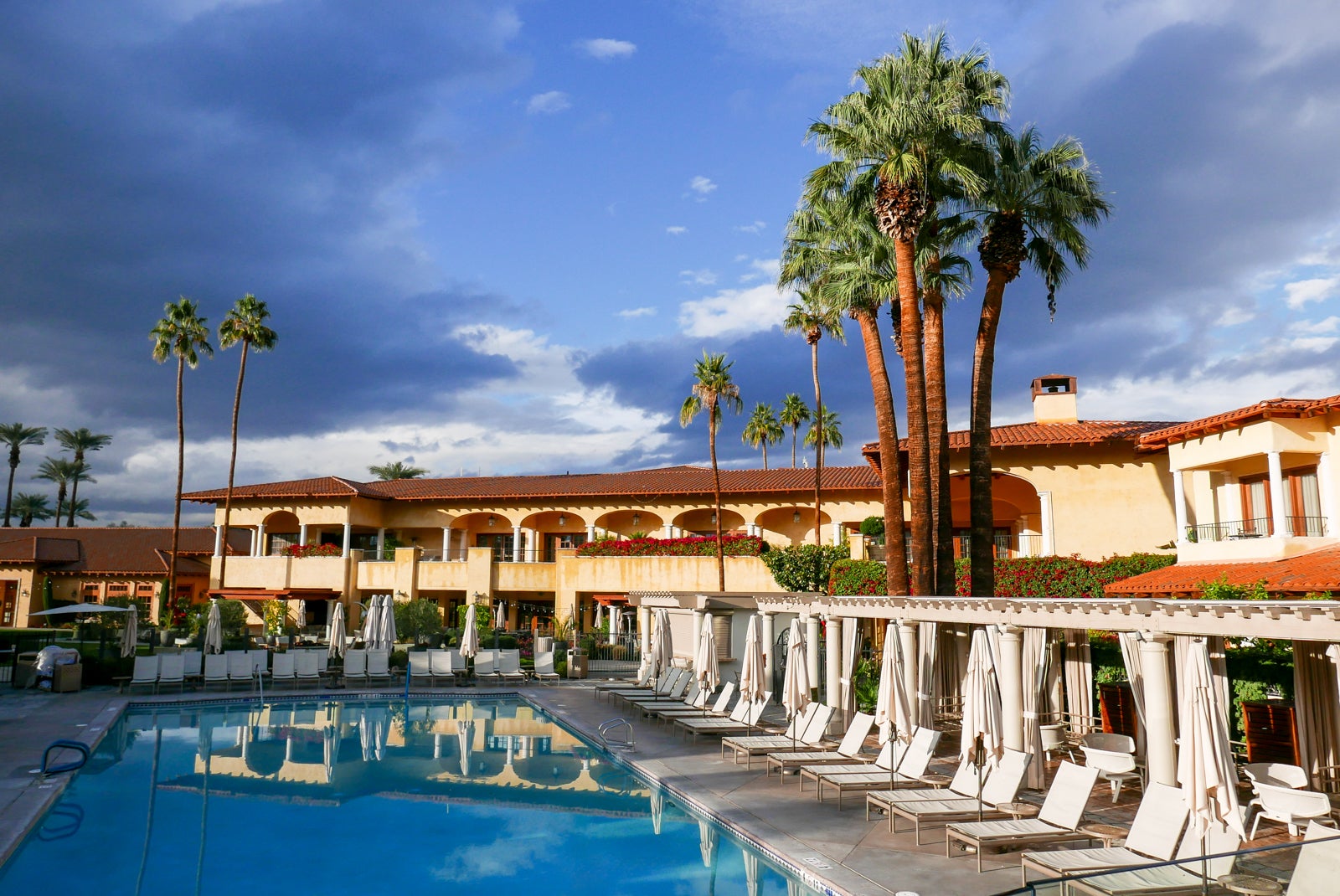 Update: Some offers mentioned below are no longer available. View the current offers here - Capital One® Venture® Rewards Credit Card

The Miramonte Indian Wells Resort & Spa, Curio Collection by Hilton is both a totally normal, quite nice hotel and a total mystery. Located in Indian Wells — a golfer’s dreamland and one of the wealthiest towns in California — the 11-acre Miramonte consists of about a dozen Spanish Colonial–style buildings, enclosed by a tall hedge and surrounding a heated pool and spa. Citrus trees and bay laurels adorn the greens, interwoven by clean-swept, circuitous paths through the property. In late 2017, the Miramonte completed an $8 million renovation that spruced up its guest rooms, lobby, restaurant and lounge, spa, and meeting and event spaces.

As pleasant as all this is, during my two-night, mid-January stay I often found myself wondering: Why does this place exist? Unlike many other properties in the area, it lays no claim to Hollywood history — Frank Sinatra never drank there, Betty Grable never popped in to use the toilet. While it’s close to Indian Wells’ many golf courses, it doesn’t have one of its own. And though it’s certainly comfortable, it’s neither overtly luxurious nor cozy and intimate, with no revolutionary spa treatments or hotshot young chef. Who is the Miramonte for? Is it even necessary? And why, despite all this, did I find myself actually kind of liking it?

We paid a total of $534 (before the $35-a-day resort fee) for my two-night stay with a Capital One Venture Rewards Credit Card, which earns 10x miles per dollar spent on hotel reservations when booked through the special link at hotels.com/venture. You can also stack this with Hotels.com Rewards, which awards one free night per every 10 paid nights. Since the free night is based on the average price of the 10 nights, when stacked with the 10x miles from the Venture Rewards, it effectively gives us a 20% return. That’s one of the very best credit card returns you can get when spending cash on hotels.

Being a Hilton property, you can of course redeem Honors points for stays, though rates vary pretty wildly -- a quick search on hilton.com showed rates as low as 37,000 points per night and as high as 228,000 per night.

The Miramonte is right on Route 111 — a state highway that runs through the Coachella Valley, past the Salton Sea and down to the border at Mexicali — and about 30 minutes from Palm Springs International Airport (PSP). If sightseeing is your goal, you’ll want a rental car (and you’ll be on the road a lot), but if you’re there to play golf, you’re in luck: On my visit, the hotel was surrounded by at least eight clubs, some of them just a few minutes’ walk, the rest just a few minutes by Uber or Lyft.

In a way, this could've felt like no man’s land — merely a high-end stop on a high-end highway — but it was also liberating. With no golf on site, you were free to roam, to experiment, to go where you liked when you liked, even if it’d take a while to get there.

"Ghhhrrrrrk!" was the sound the automatic electric door made as it slid open and I entered the lobby. Not great, but the lobby itself was cool and quiet — a fairly chic, fairly Western mix of wood and leather, with modernist light fixtures made of rope.

At check-in, I asked if they had my Hilton Honors number on file. They didn’t, but since I’d been booked via Hotels.com, the clerk said, it wouldn’t matter anyway, the system didn’t care. The clerk put me in a room smack dab in the center of the property.

“Because you’re a bad boy,” she joked.

How did she know?!

Most of the Miramonte’s guest rooms (doubles from $215) were part of small, two-story villas, their pale yellow walls swarming with flowering, ivy-like vegetation. It took a few minutes of wandering to find mine, Villa Capri, and as I climbed a short set of stairs to the second floor, I wondered about the renovation: That yellow paint looked aged and pitted, but was that an intentional effect or just the desert’s toll on décor?

I had a basic guest room, decently spacious at 425 square feet and pretty much just utterly normal. Side chair I’d never use. Dresser I wouldn’t stock with clothes. Forgettable art depicting local flora. Fast-enough Wi-Fi (39.1 Mbps download speed). A too-high desk with a too-low chair. Was this the result of renovation? The bathroom certainly seemed nearly unreconstructed, with a low, basic tub/shower and toiletries by Archive, a brand that exists only in hotels.

Still, when I opened the door onto my Juliet balcony, I felt a rush of exhilaration: mountains in the near distance! Orange and lemon trees outside my window! Finally, it seemed, I was in California.

As I walked across the property — past the steaming pool, the fire pit, the giant Connect Four game — I was filled with anxiety. What might await me at Citrus & Palm, the Miramonte’s restaurant? Would it live up to the ambitions of its farm-to-table menu or fall back on Sysco-style commodity cooking?

With my first sip of chicken noodle soup, sitting at a banquette in the corner of the window-lined dining room, I had my answer: This was good! The warm broth had a deep sweetness that took the chill out of the desert night air, and I followed it with a lobster salad — big, tender chunks of meat, lots of avocado and juicy, sharp Fresno chiles. The pumpkin tamales were exemplary, rich and moist with none of the heaviness I’d fearfully expected.

As fine as this cooking was, however, it was also frustrating, because the meal (which came to $95 with dessert, a cocktail, beer and coffee) felt rushed, with each course arriving before I’d finished the last. I was one guy, having a couple of drinks, in a nearly empty dining room — there was no reason to rush. And yet I was in and out in about an hour, as confused as I was pleased.

A room-service breakfast did nothing to alleviate this confusion. My meal, called “Coachella Valley Sunrise” ($30) — yogurt, granola, fruit, date bread, OJ, coffee and pastries — arrived 15 minutes faster than the 30-minute estimate, but felt tossed off: This was commodity fruit (pineapple! honeydew!), commodity coffee. The listed “artisan pastries” were missing, too; when I inquired about them, there was confusion — employees did not know the breakfast had another element. Eventually, the pastries were delivered, sheathed, like everything, in plastic wrap. I put them in my backpack and forgot about them for days.

A rainy three-day stretch in midwinter was probably not the best time to evaluate any hotel in the Palm Springs area, particularly for a non-golfer like me. The Miramonte’s heated pools, one big, the other secluded, held little attraction in the gray damp, and I had no need to take a shuttle to a golf course or borrow a bicycle to ride around Indian Wells. The Miramonte felt like a hangout spot, a place to chill with a glass of wine between tennis lessons — which was really quite refreshing. There was no pressure to make the most of a zillion enticing resort offerings, then feel guilty for not experiencing them all. Instead, you were simply there. You ate, you rested, you stared at that Connect Four and maybe even gave it a shot.

And if you’re like me, you picked fruit. Those citrus trees weren’t just for show — they were for guests. The front desk offered me a pole to clip all the fat lemons and Satsuma mandarins I wanted. Instead, I wandered around, leaping and climbing and grabbing by hand, because I am a bad boy. This felt like the most luxurious part of the experience: the freshest possible fruit, ripe for the picking.

In a world where every hotel and resort, chain or independent, is fighting for your attention, struggling to demonstrate that its utter uniqueness is worth your patronage, the Miramonte stands out for not doing any of that. The Miramonte is comfortable, not cushy, and confident of its charms. It trusts its guests to make their own fun, whether on site or off, and if they need help facilitating those good times, well, the resort is there to help. But the Miramonte isn’t going to try too hard and wind up getting in your way — the lobby door will be fixed, eventually, and room service will get briefed on the new menu. And maybe when they do — and maybe if I get into golf — this bad boy will be back.

All images by Matt Gross.

Correction: An earlier version of the story stated that this property is in Palm Springs, CA, when in fact it's located in Indian Wells, CA, near Palm Springs. The story has been updated.

The world of points, miles and credit cards can be difficult to enter, especially when many travel cards come with hefty annual fees. Luckily for many budding travelers, the Capital One VentureOne card is a no-annual-fee travel card that allows cardmembers to earn 1.25 miles per dollar spent on everyday spending and 5 miles per dollar spent on hotels and rental cars booked through Capital One Travel. With its flat rate earning and lack of annual fee, the Capital One VentureOne card could be the perfect intro travel credit card. Coupled with a sign up bonus of 20,000 bonus miles after you spend $500 on purchases within the first three months of account opening, there are few reasons to not get this Capital One VentureOne.

The world of points, miles and credit cards can be difficult to enter, especially when many travel cards come with hefty annual fees. Luckily for many budding travelers, the Capital One VentureOne card is a no-annual-fee travel card that allows cardmembers to earn 1.25 miles per dollar spent on everyday spending and 5 miles per dollar spent on hotels and rental cars booked through Capital One Travel. With its flat rate earning and lack of annual fee, the Capital One VentureOne card could be the perfect intro travel credit card. Coupled with a sign up bonus of 20,000 bonus miles after you spend $500 on purchases within the first three months of account opening, there are few reasons to not get this Capital One VentureOne.