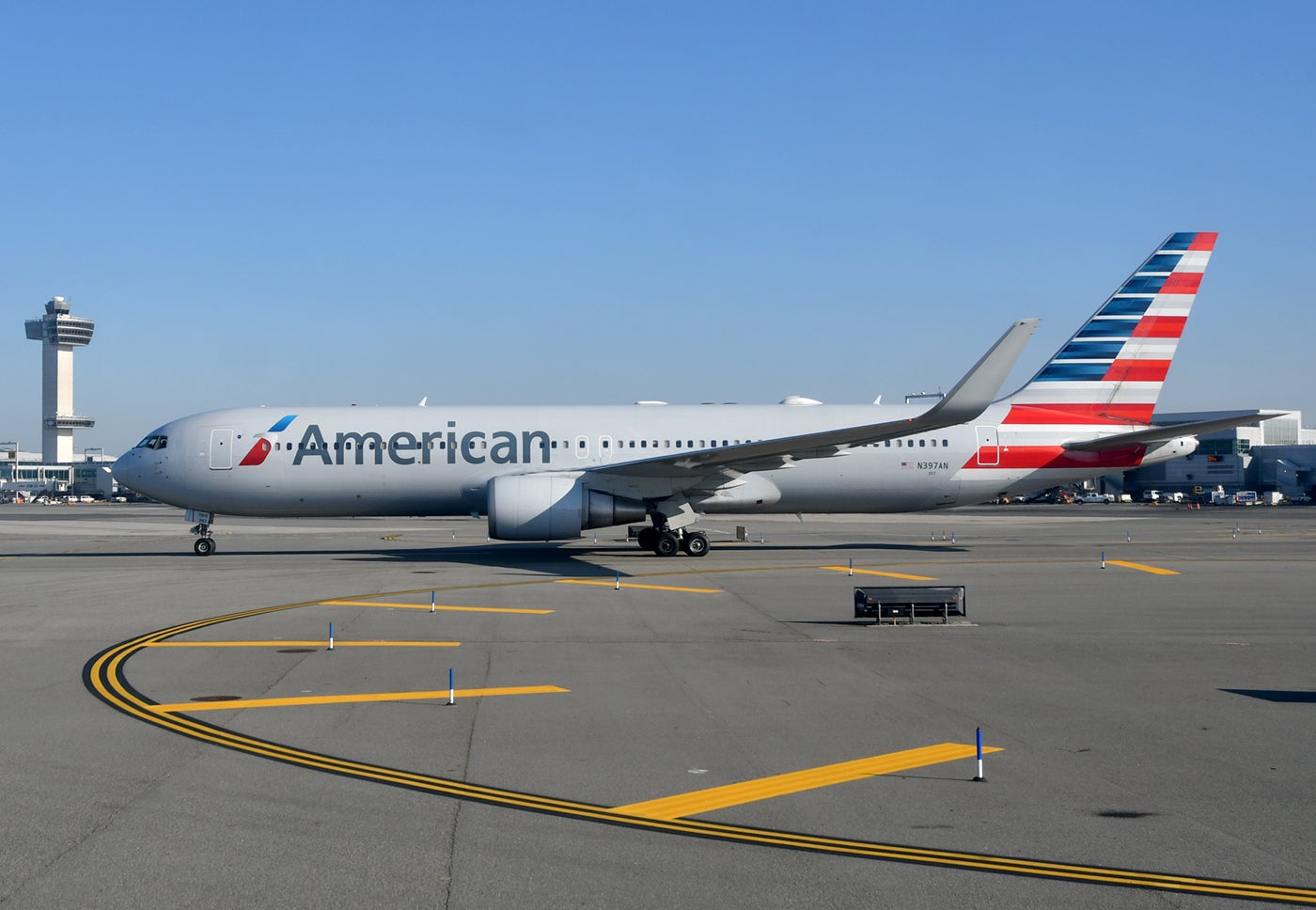 I flew one of the last American Airlines 767 flights before its retirement
This post contains references to products from one or more of our advertisers. We may receive compensation when you click on links to those products. Terms apply to the offers listed on this page. For an explanation of our Advertising Policy, visit this page.

One of the unforeseen effects of the coronavirus pandemic is that airlines have retired entire fleets of aircraft before they were planning to. Old workhorses familiar to generations of frequent flyers are disappearing from the skies in the U.S. and elsewhere. One of them is American Airlines' Boeing 767.

Before COVID-19 obliterated demand for travel, American was flying 21 of the long-haul 767-300ER version on routes to Europe, South America and within the U.S. Now it has parked all of them for storage at the Roswell airport in New Mexico. The last one remaining in the active fleet was ferried to Roswell on March 31, according to flight-tracking sites, and while American hasn't said officially that the 767s are retired, this is clearly the end of the line for the 767 at AA.

Sign up for TPG’s free daily email newsletter for more travel stories and tips delivered each morning to your inbox!

Before the novel coronavirus hit the U.S., I had been charged with reviewing what was then one of the two lie-flat premium-class options in scheduled service between the New York area and Miami, American's 767. It was part of a TPG project to determine which method of flying between New York and Miami is the best. I was eager to see how American's older lie-flat product from JFK compared with other first and business classes to Miami, namely United's 757-200 lie-flat from Newark.

Related: What's the best way to fly between New York and Miami?

When I flew it in late February, I had no idea it would be among the last scheduled flights on American with the 767, a plane it had flown, in various versions, since 1982. No one did. If I'd known, I would have taken more pictures, maybe ordered an extra mimosa.

Those 767 may not be grounded for long, though. Many are getting a new lease on life as all-cargo jets. My particular plane, a 21-year old model registered N397AN, made several trips between Miami and Lima, Peru, in late March, before taking one last flight to Roswell. It too will, presumably, become a cargo jet. While dated as commercial jets, 767s have the room and range to fly heavy freight over oceans, and they are a sturdy, time-tested design that’s been around since the early 1980s.

Anyway, back to the flight.

This one-way cash ticket to Miami cost $489, which we paid using The Platinum Card® from American Express. We could also have used 48,000 American AAdvantage miles plus taxes and fees. We value American miles at 1.4 cents each, making a 48,000-mile award ticket worth $672 — and a cash option more attractive. Prices have changed significantly now due to the coronavirus-related demand drop. A search for late April and early May for New York to Miami turned up one-way first-class prices as low as $363 from both JFK and LaGuardia. In coach, prices can go as low as $60 for regular economy from LGA. You could also use 25,000 miles, or 10,000 in coach. There are only two flights a day between New York and Miami in American's current schedule, both with Boeing 737s.

I arrived at John F. Kennedy International Airport's Terminal 8 a little more than an hour before departure. T8 — home to American Airlines at JFK and to some of its partners in the Oneworld alliance — was a bit livelier than the eerie desert TPG UK's general manager Christian Kramer would find a few weeks later on his way back home to London.

As a domestic first-class passenger, I proceeded to the dedicated priority line to print my boarding pass. I was the only person in line. The priority security line was completely empty too, while the regular security line was pretty long.

It was a completely full flight, a sight we may not see again for a while as planes fly almost empty. Ahead of me in Group 1, a lone Concierge Key member — American's invitation-only, ultra-elite tier — boarded.

Once I got onboard, the business class I found was in a 1-2-1 layout. One thing I won't miss about the outgoing 767? The lack of privacy. American used Thompson Vantage seats on its 767-300s, arranged in a 1-2-1 configuration. I much prefer business class on AA's Boeing 777-200, which I flew from Miami to New York last November. It felt way more secluded. (Keep in mind that AA has two different business-class seats on the 777-200. Both are better than the 767's.)

That said, I did appreciate each seat having unobstructed aisle access on this flight. The cabin looked a bit like Delta Air Lines' Delta One biz class on the same aircraft, which, in a recent review, TPG's Senior News Editor Clint Henderson called "old-school, retro-style." (Delta is retiring some of its 767s, but not the entire fleet, according to its current coronavirus-response plans.)

By the time I'd checked in for my flight, only one seat remained, 8A. This ended up working perfectly as even-numbered seats were closer to the window, while odd-numbered seats were more exposed to the aisle. I lucked out and got two windows in 8A, which was nice for my farewell to a plane in which I'd had one of my first domestic lie-flat flights.

The seats featured two universal outlets, with one located behind the tray table and another by the storage area. Even on such an old bird, I was impressed with the ample storage space to place my headphones and other assorted items. The seat was plush and comfortable, and I got a solid 30-minute nap in the lie-flat position. The Points Guy himself was a fan of the American 767, in fact.

But here's why the 767 won't be missed by many: it had no inflight entertainment. In coach class, there were only overhead monitors — like in the 1980s. And in business, American installed no IFE screens at all, so entertainment was in the form of a tablet handed out by flight attendants and featuring a small selection of titles. Even United's relatively dated lie-flat 757s offer a 15-inch screen.

American used to fly these jets on long-haul routes like Philadelphia to Budapest and Prague that could be more than nine hours in the air. Without IFE, it could have been excruciating. At least now all of American's long-haul jets will have IFE. However, AA's long-haul fleet has been reduced to just 36 airplanes as of April 23, according to fleet-tracking site Planespotters. More than a hundred long-range jets are parked in storage, awaiting the return of passenger demand.

The flight attendants really shone on this flight. My experiences with American's flight attendants in business and economy have ranged from indifferent to downright surly. They were very chatty on this afternoon flight, coming through the cabin to refill drinks and check on passengers. It seemed everyone was in a good mood heading down to Miami, a feeling we all hope to recreate once we're back to flying regularly.

I returned from Miami to New York on a Frontier low-fare, no-frills flight, so the lunch I got on this leg was my last airplane meal for the foreseeable future. It was lasagna, a salad and a warm wheat roll, and I ordered a sparkling wine to go with it. It was crisp and refreshing, and while the meal wasn't exceptional, it's a very fond memory now.

Shortly after plates were collected, I received a delicious warm chocolate chip cookie, easily one of my favorite features of flying American biz, no matter the aircraft. I also ordered a coffee, which I sipped while munching on my cookie.

As airlines begin to retire their oldest jets as a result of the coronavirus pandemic, the Boeing 767 will become one of the first casualties. I admit I do have some nostalgia; an American 767 was one of my first domestic lie-flat flights. My second and last time on it was a great flight, even though the plane showed wear and tear and lacked the luster of other newer jets. Now that it's gone, it's also one fewer option to fly lie-flat to Miami. Depending on whether United brings back its 757s on the route — it has already taken them out of service on coast-to-coast flights — there may be no more.

So, farewell, you beautiful, old bird. We'll miss you.