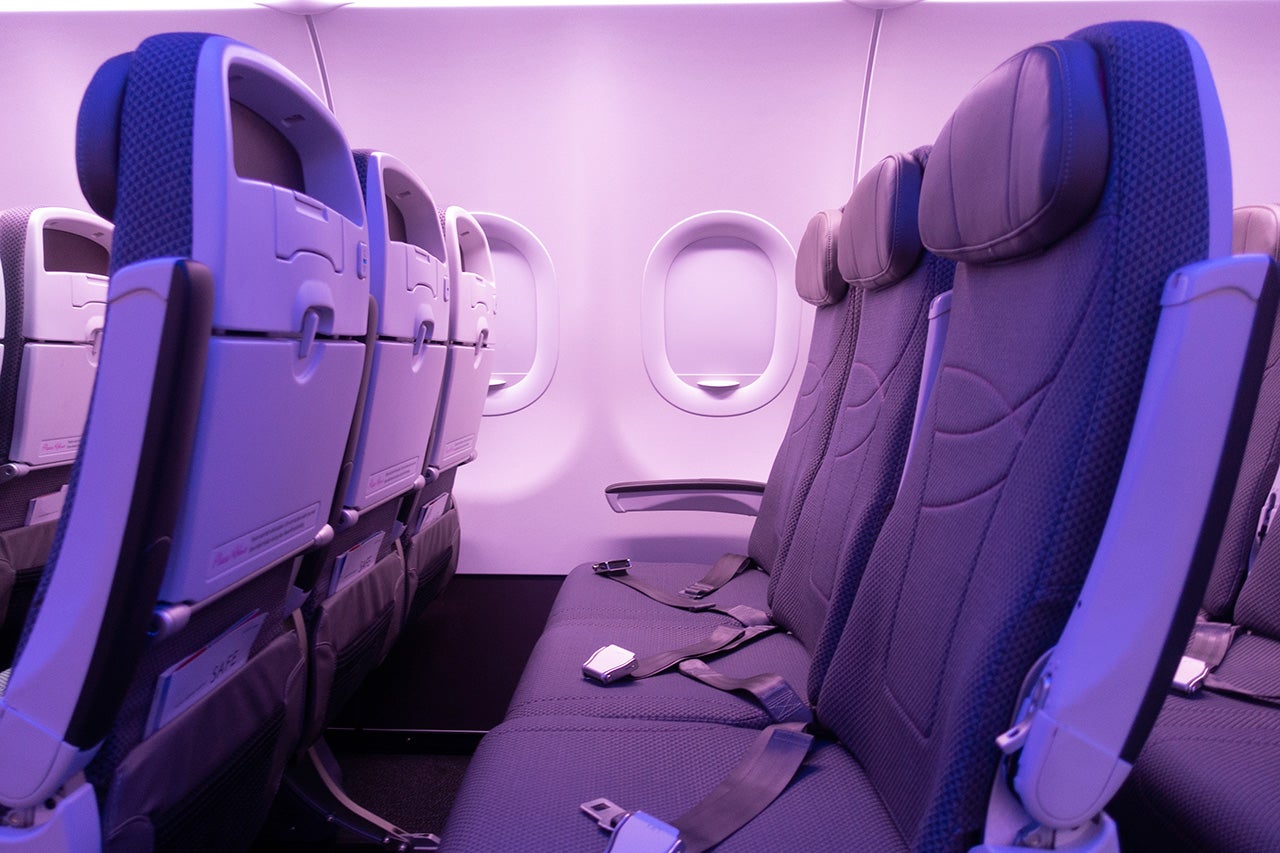 After almost a week of hotel hopping (and reviewing) in Maui, it was back the mainland — this time in the back of the plane. After experiencing Hawaiian Airlines' A321neo in first class from Portland to Maui, I took the return trip on the same aircraft type in coach.

The A321neo is replacing Hawaiian's aging fleet of 767s on flights between the islands and the West Coast. It began operating flights between Portland (PDX) and Maui (OGG) in April 2018. The A321neo has just one aisle, versus two on the 767, and features USB ports at all seats. While it was a pretty standard economy experience seatwise, friendly flight attendants made for a comfortable journey.

There are many ways to make it to the islands using points and miles, but in this particular case, we went with a cash fare. My flight was booked as part of a round-trip itinerary that included the outbound segment in first and the return in economy. The round-trip ticket cost $837 and was charged to The Platinum Card® from American Express in order to earn 5x points on the purchase. If we had booked just the economy segment from Maui to Portland (PDX), it would have cost about $467 (prices dip lower at the end of the year and in January and February).

If you’d prefer to go the redemption route, you can transfer Amex Membership Rewards points to the HawaiianMiles program at a 1:1 ratio — in our test, the transfer went through instantly. A one-way, economy award flight from North America to Hawaii costs 20,000 miles at the saver level, so you could use the welcome bonus from the Platinum Card® from American Express (60,000 points after you spend $5,000 in the first three months) to book three economy flights. Saver economy space seems to be much more readily available than first saver space, too.

Like I mentioned in my review of first class, I chose to credit this flight to JetBlue, which Hawaiian Airlines has a partnership with. TPG values JetBlue miles slightly higher than Hawaiian miles (1.3 cents vs. 1.2 cents apiece), and I fly JetBlue home to San Diego all the time. I don’t anticipate using miles to fly Hawaiian Airlines, so I didn’t want to end up with orphan miles in my Hawaiian Airlines account. I called Hawaiian to add my JetBlue TrueBlue number to the reservation in order to earn points, and the representative confirmed I would earn 50% of my flight miles, whereas first-class tickets earn 100% of the miles flown.

The predeparture process for this flight was pretty uneventful. I was through the TSA PreCheck security line in about five minutes, and then made my way to the crowded departure gate. As we were flying out from Hawaii, bags needed to go through agricultural inspection.

The only lounge option at OGG was a Hawaiian Airlines Premier Club, accessible to premium-cabin passengers, those with elite status and those who'd purchased Premier Club membership. I didn't qualify by any of these metrics, so I just waited it out near the gate.

This flight marked the first time in my life that I've ever gate-checked a bag. Hawaiian Airlines called for volunteers to do so, and a huge line of passengers queued up. Since I was seated at the very back of the plane (40G) and wouldn't be in the first boarding group, I didn't feel like dealing with the hassle of finding space for my rollaboard bag.

The gate staff was efficient at getting bags gate-checked. The passengers were less efficient. Several of them were standing in line, presumably to check bags, but then eventually made it clear that they were just lining up to board. That slowed things down a bit.

I was in Boarding Zone 3, but the gate staff was kind enough to relay my request to board early (for the purpose of getting photos for this review) to the flight crew. They allowed me to preboard, which gave me a moment to snap photos before passengers took over the main cabin.

This also gave me a head start on nabbing overhead bin space for my sizable backpack. I'm not sure if I would have been able to grab that space — at least the one directly by my seat — if I hadn't been able to board early.

Hawaiian Airlines' A321neo had 129 seats in the main cabin. That was in addition to 44 Extra Comfort seats and 16 first-class recliner seats on board the plane.

The economy cabin on this single-aisle plane was in a 3-3 configuration — standard for the A320 family.

Seats were 17.3 inches wide and had 30 inches of pitch, pretty common for economy seats. I'm 5 feet, 7 inches, and I didn't feel cramped when it came to legroom.

I prefer the window over the aisle but ended up with the latter on this trip, so I was worried I'd be in for an uncomfortable flight, without a surface to lean my head against.

It ended up being more bearable than I'd anticipated, as the seats didn't feel too cramped. It helped that the passenger in front of me didn't recline her seat, and that my seat neighbor was asleep and didn't touch the armrest the entire flight.

There was no seatback entertainment on this flight, though passengers could access IFE options through the Hawaiian Airlines app.

In first class, passengers got tablets, but I wasn't impressed with the selection when I flew up front. Plus, most entertainment came at a cost back in economy: $7.99 for pay-per-view movies, $7.99 for an "Unlimited TV & More" pack and $5.99 for a "Keiki Pack" for kids. I was happy to just read a book instead.

I forgot to snap a photo, but the economy-class lav at the rear of the cabin was clean enough — not spotless, but not disgusting.

Hawaiian Airlines offered a complimentary meal in the economy cabin on this route. There was only one option: a barbecue chicken sandwich, and it was served about an hour into the flight. As you can see, it was pretty big. Flight attendants also passed out Maui onion potato chips.

I got a mai tai to seal my Maui trip, and a hummus-and-pita-chip snack box, which was just... blah.

The FAs working the flight were all friendly. That seems to be pretty standard on Hawaiian Airlines, happily.

About an hour prior to landing, the flight attendants came through the main cabin offering complimentary rum punch and a snack mix (and the mood lighting was cranked all the way up, apparently).

For a five-hour, 20-minute flight, Hawaiian Airlines economy on the A321neo was just fine. If you can find a way to fly up front instead, that would obviously be preferable, but considering the better award availability, not-too-long flight times and friendly service, economy isn't a bad option either.