The Height of Hospitality: A Review of the Four Seasons Seoul 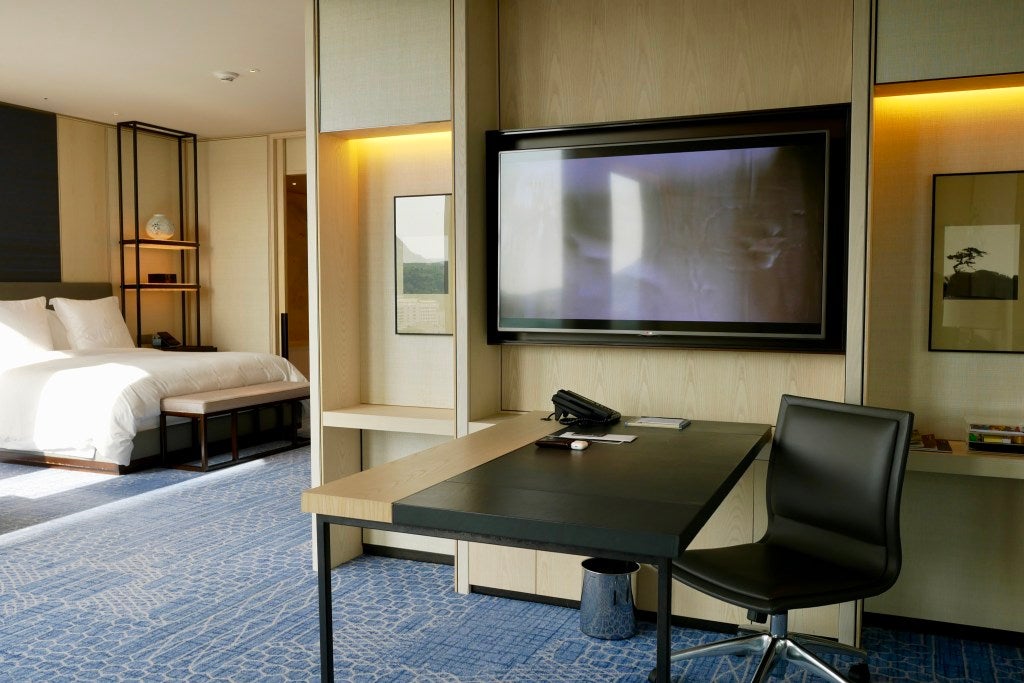 Toronto-based luxury hotel chain Four Seasons joined Seoul's hotel scene in late 2015 in the city's Jongno-gu District, a central area with plenty of government and corporate offices. It also happened to be the location of several work meetings I had on a recent trip to the South Korean capital — the Four Seasons was ideally located, so I decided to check it out.

For years, I have heard rumors that Four Seasons was thinking about launching a loyalty program. To date, I am only aware of an invitation-only guest recognition program for high-value repeat customers.

Having not received such an invitation (yet!), I decided to see if Four Seasons Seoul was part of the American Express Fine Hotels & Resorts program. The program offers the following benefits for all hotels in the portfolio: a room upgrade upon arrival, subject to availability (Centurion cardholders can get an upgrade confirmed at time of booking; daily breakfast for two people; guaranteed 4pm late checkout; noon check-in, when available; complimentary Wi-Fi; and a unique property amenity (typically a food-and-beverage or spa credit).

Thankfully, Four Seasons Seoul was part of the portfolio, with rates starting at 370,000 won (approximately $330) per night. For the unique property amenity, Four Seasons Seoul offered a $100 food-and-beverage credit (which was explained as a 110,000-won credit at check-in).

I booked a corner premier king room for 420,000 won (approximately $375). Though the Four Seasons website usually offers a prepaid rate around 10 to 15% cheaper than the regular rate, the regular rates generally match the availability presented on the Fine Hotels & Resorts portal. Since the benefits above were important to me, I stuck with booking through FHR. I booked my stay before Amex upped the earnings for those who book FHR stays online with The Platinum Card® from American Express, so I only earned 1 Membership Rewards points per dollar. Soon, however, you should be able to earn 5x points for your stay when you book through FHR online.

While Jongno-gu may not have the high-end retail of the Gangnam District (home to the city's Park Hyatt and Le Meridien properties) or the culinary diversity or nightlife of Itaewon (home of the Grand Hyatt), Jongno-gu has plenty of history, including Gyeongbokgung Palace, a collection of hundreds of buildings dating back to the 14th century spread over nearly 100 acres. The hotel was about a 45-minute cab ride from Incheon Airport (ICN).

Like much of Jongno-gu, the hotel's exterior felt very business-like.

The interior, however, was gorgeous. That said, the first thing I noticed about the interior was an aroma: I couldn't quite place it, but it was spicy and earthy. I loved entering the hotel every time. The lobby was sleek and warm, though a bit dark.

To the right of the entrance was a comfortable seating area surrounding an indoor fire pit.

Beyond check-in was a two-level atrium, which had beautiful flower arrangements each day. Perhaps not coincidentally, the opposite side of the lobby housed, among other things, a flower shop.

The employees handling check-in were supremely polite, professional and polished. They proactively went through the American Express Fine Hotels & Resorts benefits with me and told me that I'd been upgraded from an already generous 603 square feet to a studio suite (807 square feet).

The hotel's studio suites occupied a specific single line in the hotel from the 18th through the 29th floors. These rooms had a fairly unique shape to them: The main trunk of the hotel was L-shaped, and the studio suites were in the crook of the L, facing northwest.

The room was long and large.

Immediately to the right was a walk-in closet the size of many hotel bathrooms.

A small bathroom with commode sat between the hallway and the bathroom, which had a shower with rainfall shower head that would definitely pass the TPG shower test, tub and double sinks.

Past the bathroom was the bedroom and large adjacent sitting area with a great desk. The desk area had its own TV.

Next to the desk was a tray with commonly needed office supplies and helpful local information, including a jogging map.

A welcome note from the hotel's general manager, along with pastries, a plate of fresh fruit and a bottle of raspberry tea, were waiting for me when I arrived.

I enjoyed the view. Being on a higher floor helped.

At the end of the hallway was a Nespresso machine, a minibar and a sink. I loved the simplicity of the cups and plates. The minibar was well-stocked.

At the end of the hotel's hallway, looking north, was a great view of Gyeongbokgung Palace.

The Four Seasons Seoul had seven main dining options: Yu Yuan, a one-Michelin-star Cantonese restaurant featuring impressive Peking duck; Boccalino (Italian); Kioku, a stunning sushi spot with large atrium; Maru, which offered bit of everything, on the lobby level; Confections, a cafe with coffee, tea and sweets on the lobby level; Market Kitchen, a large space one floor below the lobby, featuring a buffet (this is also where the Fine Hotels & Resorts free breakfast credit was applied); and Charles H., a hidden speakeasy one floor below the lobby (if you can't find it, staff will gladly point you in the right direction!), with cocktails organized by different parts of the world.

During my stay, I visited Yu Yuan, Maru, Confections, Charles H. and the Market Kitchen. Yu Yuan was good, but after sampling my fair share of Peking duck in Manhattan's Chinatown over the past 15 years or so, I left wondering whether it really deserved a Michelin star. Charles H. was a lot of fun, and the cocktails were excellent. The head bartender, Lorenzo Antinori, from Rome, walked around on a busy night asking how patrons were enjoying their drinks.

Maru and Confections were on the lobby level on either side of the south entrance to the hotel. There were a couple of mornings when I had a coffee at Maru after breakfast downstairs, since Maru had natural light, making it a nice spot to catch up on news. It also had the feel of a library.

I did not actually eat anything from Confections (I did try the La Colombe coffee), but the offerings were tempting. When I took these pictures early in the morning, none of the pastries were out for the day.

I started every morning during my work trip in the Market Kitchen, since that's where the breakfast buffet was. The entrance was just around the corner from the check-in desks.

At the bottom of the stairs, the room opened up to a small wine shop and a raised seating area that was never in use while I was there.

To the left was the main dining room, circled by maybe the most extensive buffet I've seen in a hotel, including fresh fruit, pastries, yogurt and granola cups, salads, dim sum, sushi, your typical Western options (including an omelette station, pancakes, waffles, bacon, sausage, etc.) and — my favorite! — a DIY bibimbap area.

Perhaps my favorite part about the Market Kitchen was what was underneath the floor. My understanding, based on what hotel staff explained to me, is that during construction of the hotel, workers uncovered ancient Korean ruins, so the hotel put glass floors in so that visitors could see. Certain artifacts were also on display.

While I did not have ample time to check out all of the Four Seasons Seoul's amenities, I did have time to check out the gym, pool and an indoor golf simulator called the Golf Experience. In the warmer months, there is also Garden Terrace on the hotel's 15th floor, where they serve burgers and drinks, but it was not yet open during my stay.

The gym, pool and spa were spread across three floors of the hotel. The gym and pools were on the ninth floor. The gym was massive — nearly 9,000 square feet — and open 24 hours a day.

At the entrance of the gym were fresh oranges and lemon water.

Between the gym area and the pool area was a small cafe/juice bar, which was not yet open when I was there around 5am.

Beyond the cafe/juice bar was an entrance to the pools and sauna. The main pool was a three-lane lap pool. There was a separate vitality pool and a plunge pool for kids.

There was also a "panoramic sauna." I'm not really a sauna guy, so I'm assuming this was just a clear-walled sauna with views of the pool and ninth-floor windows.

I also took a few photos of the waiting area for the Golf Experience on the 10th floor, though the patrons seemed to be taking their practice time in the simulator fairly seriously, so I did not snap any photos in the actual simulator itself.

The Four Seasons Seoul was a special treat. I could easily heap plenty of praise on the rooms, dining and amenities, but the service is what stood out to me. Staff were always warm and welcome, and seemed eager to make my stay as good as it could be. If I called the front desk with a specific need, like additional adapters for my electronics, someone came within two minutes. The evening I arrived, they were also kind enough to expedite pressing of a suit I needed the next day. So the staff at the Four Seasons Seoul deserves significant credit for making the hotel feel as much like home as it could for my stay there.