Articles
Ben Smithson is a senior writer for TPG UK. Originally from Australia, he is the primary points and miles writer for the U.K. site.
Follow
May 07, 2022
•
10 min read 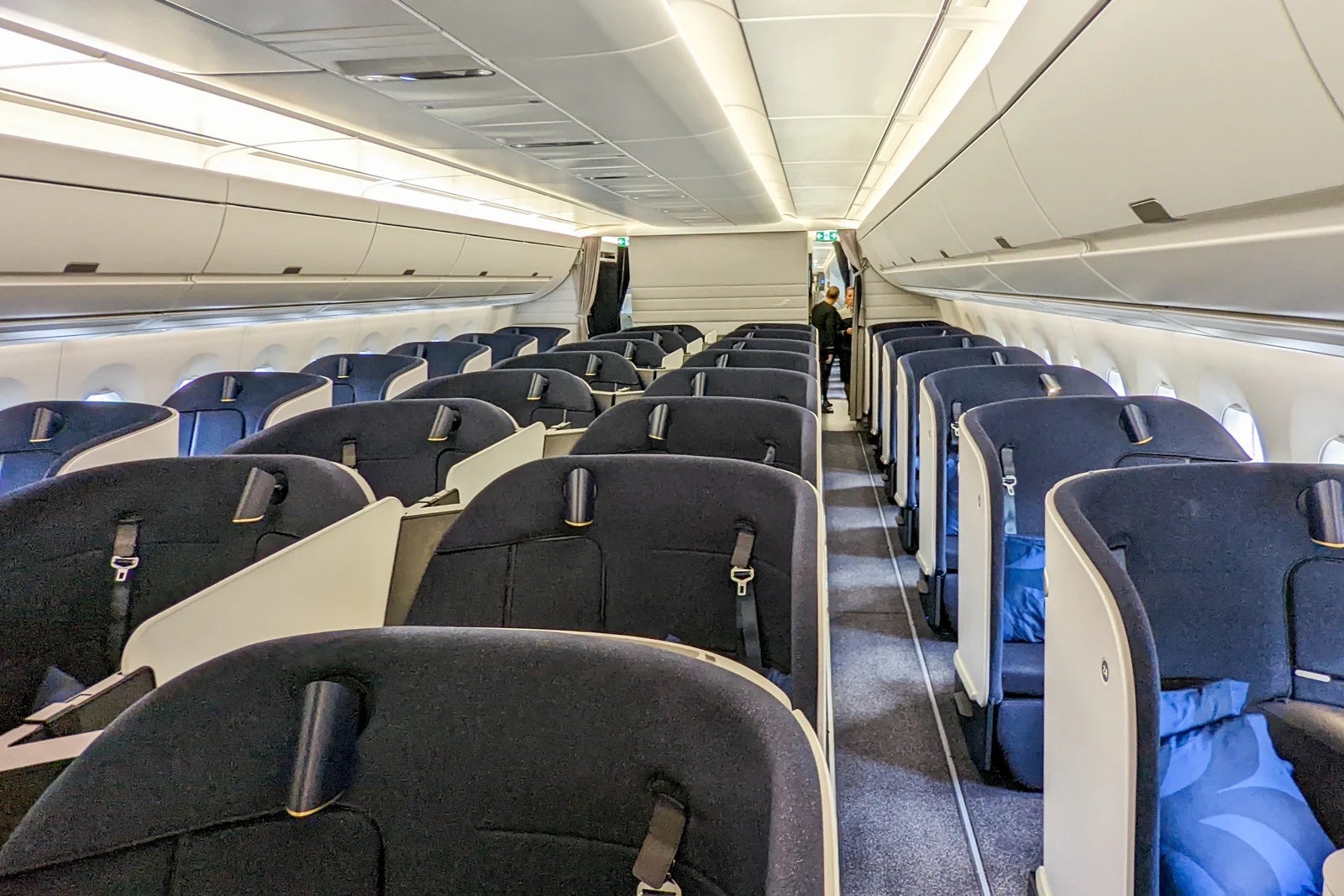 Announcements about new business-class seats are a routine occurrence in the aviation industry, and they always grab our attention at TPG — but some announcements can be more exciting than others.

Committing to a new product is a big investment for an airline, so many carriers choose an "off-the-shelf" product that has already been tried and tested elsewhere. They may make minor customizations and switch up the color palette to fit their own branding, but you often notice little physical variation between airlines.

What is infinitely more exciting is when an airline introduces something entirely unique that is not used by any other carrier, such as a new business-class seat that doesn't recline at all, but rather transforms into a type of bench.

Finnair is the launch customer for the unusual new AirLounge seat designed by award-winning seat manufacturer Collins Aerospace and is the only airline currently with this type of seat on board.

This week, I flew on a new Finnair Airbus A350-900 in business class on the short hop from the carrier's home base in Helsinki Airport (HEL) to London's Heathrow Airport (LHR) to test out this unique design and satisfy my own curiosity.

Was a non-reclining seat in business class brilliant or awful? Here are my impressions of Finnair's new business-class seat.

The seat is huge

You'll notice in the new Etihad and British Airways seats pictured above, like with many other pod-style business-class seats, that there is a fixed, curved "shell," and then within that, there is a cushioned seat. The new Finnair seat does away with the chair-style seat altogether and instead makes use of the shell by adding padding to what would otherwise be its hard inner surface. That gives that cabin and the seats themselves a much more spacious feel.

Arranged in eight rows with a 1-2-1 layout, each of the 32 seats has what feels like a huge footprint, making the aisles seem tiny in comparison. Finnair was wise to forgo overhead luggage bins for the center of the cabin, as it might have made the cabin feel claustrophobic.

The benefit of each seat taking up such a large area is that it provides a great deal of personal space and privacy to each passenger when seated. I loved the high curved cocoon wrapping right around my head in my 4A seat. It was cozy and inviting, and the navy blue color scheme felt both warm and cool at the same time.

The seat doesn't have the sliding door that many other airlines have introduced in business class recently, but the shell's high walls meant I couldn't see any other passengers while seated.

I had selected a window seat. If you are in one of the middle pairs, there is a divider that can be raised, giving you plenty of privacy if you don't fancy getting to know your seat neighbor.

Related: Update: Which flights do I need to wear a face mask? An airline-by-airline guide

One of the great innovations in business-class seats in the last decade is the amount of personal storage airlines have managed to build in. This means passengers can store most, if not all, of their personal belongings within easy reach of their seat without needing to get up to retrieve items from the overhead bin.

The storage in the AirLounge seat is what you would expect from a leading product. There is a compartment next to your torso where the remote control and charging plugs are found, another small bin under the window and a small shelf under the footrest for a pair of shoes.

Simplicity is its strength

Since the new seat has few moving parts and no complex machinery, it is lightweight and should be easy to maintain, a real benefit to the bottom line of any airline. For passengers, it is incredibly easy to operate, as there are so few settings, and getting from lounge to bed mode is relatively straightforward and intuitive. There's a thin padded rectangular block that can be raised up via a lever on the aisle side, as well as a button to raise and lower the main leg rest.

There are some basic lighting controls, too, but that's it.

You are very unlikely to lose your phone in a seat mechanism or struggle to retrieve a seatbelt buckle or strap.

On the topic of seatbelts, there is a cleverly concealed extra belt at the top of the leg rest to buckle yourself in when lying flat.

The bed is long and comfortable

I'm six feet tall, and there was plenty of space to lie down and stretch out. This is one of the only business-class seats I have been in where my toes did not touch the seat at the end of the footwell in front.

The footwell becomes fairly narrow, so if you regularly roll over in your sleep, you may find this tight, but this is a common issue in many staggered and reverse-herringbone cabin designs.

However, the metal pole next to your feet is unfortunate and sticks out both physically and figuratively as a clunky feature of this otherwise very sleek seat design.

I wish the entertainment screen was adjustable

It's not a perfect design. While the in-flight entertainment screen was crisp, responsive and large (18 inches), it does not swivel at all. The left side of the screen in my window seat stuck out into the foot cubby slightly, which means its sharpish metal edge could cause a banged knee if you try to sit up too quickly upon waking.

The issue I found was when I was in lounging mode, the screen was fixed facing up higher than it perhaps needed to — at least for me, anyway. Being able to tilt the screen down would have made for a more comfortable viewing experience.

In bed mode, it is even worse.

Charging your phone could not be easier

My favorite feature of the new seat was the small black lightning bolt symbol on the flat surface next to the window. I assumed this was a charging spot but doubted my phone would automatically charge when placed on it. Surely there would be some sort of permission requirement prompt, or it wouldn't work with my (very non-iPhone) Pixel phone?

Sure enough, a mere second after placing my phone in the bolt area, it automatically started charging.

This is so much easier and quicker than fiddling around with USB ports and charging cables. The seat also comes with traditional USB-A, USB-C, and power points, though.

Cushions may not be enough

Two plush cushions were awaiting me — one that was more of a traditional pillow for sleeping and another that was like a throw pillow. These were supposed to compensate for the lack of recline in this unique seat.

Together, they did allow for some different positions to lounge around in. However, doing so for just 30 minutes on this short flight caused me to feel tension on both my neck and the back of my head. The seat is comfortable when sitting fully upright and lying fully flat, but you may struggle to comfortably watch "The Lord of the Rings" lounging in a position somewhere between the two.

A third cushion or pillow may be required for proper lounging.

The moving map is incredible

The moving map feature on the IFE screen is among the coolest I have seen in my travels. We're talking standard map views, landing cameras and cockpit views, as well as views out of the left and right windows.

What was more interesting was that at different parts of the flight, the map would highlight which cities the plane was flying over, no matter how obscure.

My favorite part, however, was the "Pilot's HUD" (heads-up display) view option, which showed some live flight instrument gauges, including airspeed, altitude and heading, which is a really cool feature for AvGeeks like me.

I was really impressed with the new Finnair business-class seat. On a short flight within Europe, it was positively opulent having that much personal space.

I found the seat itself to be comfortable when sitting and when lying fully flat on that long bed, though I only had time for a few minutes of test shut-eye. Given you are sitting on a padded shell rather than a traditional seat, it was more comfortable than I expected. Clearly, an enormous amount of thought went into this design.

No instructions from the crew or an instructional card were required to understand how to operate the simple seat controls. There is one up and down button next to your hips and a manual level next to the aisle. That's it.

That said, lounging with only a few cushions to support your neck and back is not ideal and less comfortable than a traditional seat that is manipulable into various positions, including fully flat.

I still consider Qatar Airways' award-winning Qsuite a better overall seat concept thanks to the high walls and closing door, which create your own mini apartment on the plane. Nonetheless, the new Finnair AirLounge business-class seat is excellent, and it's great to see true innovation in this space.