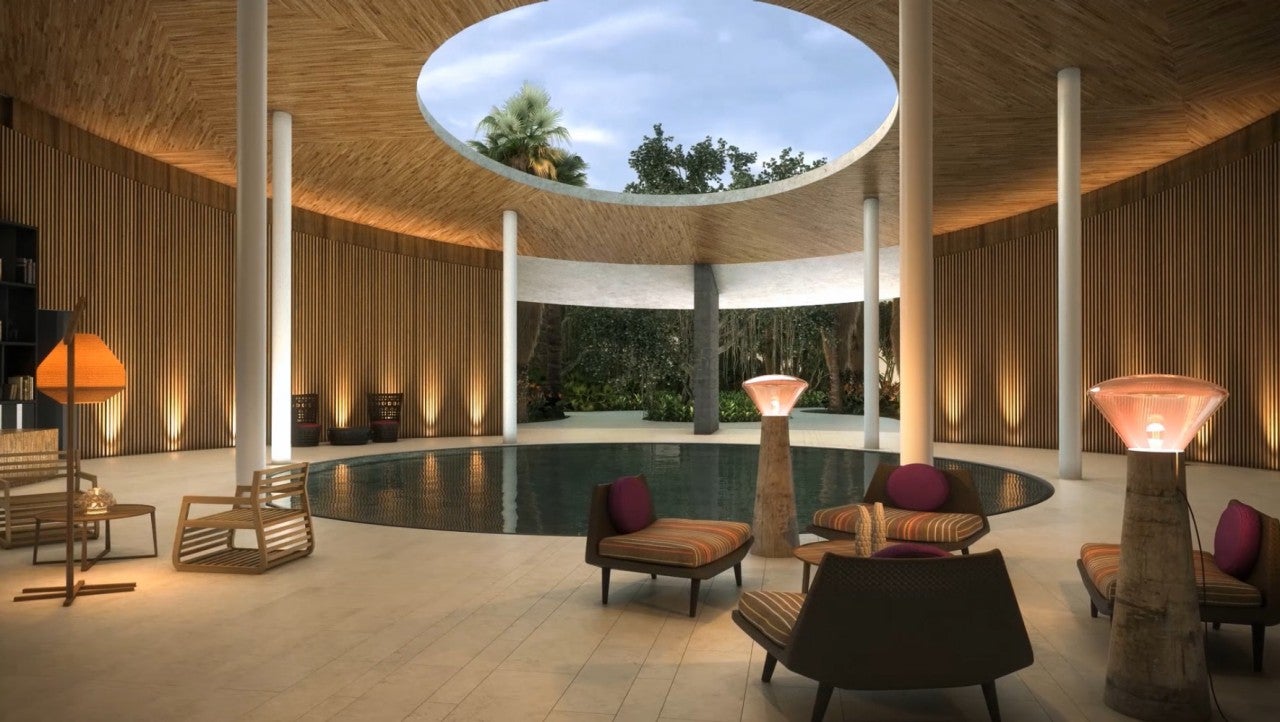 My family and I have traveled to the Cancun/Mexican Riviera area several times and found it to have a terrific mix of resort relaxation and unique adventurous experiences: everything from ziplining and off-road safaris to swimming in a natural cenote in the jungle or with dolphins or whale sharks in the Caribbean. And at 20 pesos to the US dollar for an exchange rate, most everything is quite reasonable.

It was time for us to return, and the Andaz Mayakoba Resort Riviera Maya was where we landed.

I've been a Hyatt Globalist (formerly Diamond) for a long time and achieved lifetime status a couple of years ago. The brand has always had many choices for solid business hotels in metropolitan centers, but finding a resort to blow points on has not always been so easy. Six years ago, while planning a Caribbean vacation to celebrate our anniversary, I discovered that Hyatt only had two resorts: Aruba and Cancun. Now it has more than a dozen in the region. Eager to check out this Mexican resort, I used 80,000 World of Hyatt points (the resort is a category 5 property costing 20,000 points per night) for our four-night stay, plus a guaranteed suite upgrade certificate. It's easy to amass World of Hyatt points, since the program is a 1:1 transfer partner of Chase Ultimate Rewards, whose points are earned with cards like the Sapphire Preferred and Sapphire Reserve.

The Mayan Riviera is a stretch of beach on the Yucatan Peninsula that runs south from Cancun for about 80 miles down to Tulum. There are hundreds of resorts along the coastline, but very few have loyalty programs where you can stay for free on points.

Our hotel was about a 30-minute drive from Cancun Airport (CUN). The resort was ideally situated between Cancun and Playa del Carmen, allowing for easy access to activities and sights in the area. Driving was safe and easy and much cheaper than relying on airport transfers and taxis. I rented a car from the airport (a taxi costs around $80) so we had the flexibility to go anywhere at any time, and the drive down was quick with no traffic on a modern, well-maintained, four-lane highway. Once you're on the property at Mayakoba, a taxi into Playa will run you about $13.

Mayakoba is a complex that boasts four luxury hotels (Andaz, Banyan Tree, Fairmont and Rosewood) on 600 acres about five miles north of Playa Del Carmen. At the entrance, a security guard at the gate greeted us and directed us to our hotel. Upon arriving, I was greeted by name (a nice touch) and welcomed into the lobby, also known as the Sanctuary, a tranquil oasis with a large decorative pool in the center. Like most Andaz lobbies, they were set up more like a comfortable lounge without a formal reception counter. A host checked us in on an iPad and gave us bottles of cold water and a tequila cocktail.

Since I am a Lifetime Globalist, the hotel upgraded me to an oceanfront suite, which ended up being among the nicest rooms I've ever had.

Staff provided maps to the sprawling hotel property which had two distinct areas: the lagoon and the beach, connected by a mile-long pathway through a mangrove jungle. There were two restaurants and a pool in each area, a kids club, a spa and a well-equipped fitness center in the lagoon area. A five-minute golf-cart ride took us on a little tour of the resort and then to our room on the beach. Our luggage arrived right behind us on another cart.

Entering into the living room, I could immediately see the beach and turquoise Caribbean beyond through the large patio windows. The 1,100-square-foot suite had a separate bedroom with a comfortable king bed and its own patio. The walk-in closet featured a safe, robes and flip-flops of various sizes (guests could keep the flip-flops). The bathroom had plenty of space to scatter one's stuff across two sinks, a large rainfall shower with a separate handheld wand and a partially frosted window overlooking the beach. A selection of Malin+Goetz toiletries added an elegant touch, and there was an ample supply of fluffy white towels. The toilet and a third sink were in a separate room. Our daughter slept on the large sofa and her friend on a rollaway in the living room, and there was still plenty of space to walk around.

Room amenities included free snacks and nonalcoholic drinks in the minibar, which was restocked daily, free fast Wi-Fi and a private patio connected to the beach, complete with a private plunge pool.

This was my first time in a room with a plunge pool, and I must say it was a really nice feature. About the size of a Jacuzzi, it had light underwater jets and space for four people to recline submerged.

Some of the larger suites down the beach had much larger plunge pools.

While our oceanfront suite in Building 3700 was definitely among the nicer rooms, I also checked out a standard guest room with a lagoon view for comparison. It featured most of the same amenities, just the different view and a balcony.

We ate at three of the four Andaz restaurants, and they were all quite good. There were also a bunch of good restaurants at the other three resorts of Mayakoba, and you could get a free ride to any of them and then charge the meals to your room at the Andaz.

As a Hyatt Globalist, I got a free buffet breakfast for us in the main restaurant, Cocina Milagro, which was excellent. On Sundays, their finer restaurant, Casa Amate, had a buffet brunch, which was awesome, and well worth the $35 per person they charged for it. The variety was almost unimaginable and included an open-flame grill with everything from steaks to octopus, a fresh ceviche bar and fresh local delicacies. If that weren't enough, we were invited into the kitchen to meet the chef, and he would happily make us whatever we wanted in the way of eggs, bacon, omelets and such. It also had a fresh green juice that was so amazing that we couldn't get enough of it.

The beach had perhaps the softest, whitest sand I've ever seen. There were plenty of places to sit in the sun and shade, and the water was as warm as a bathtub. There were kayaks, paddleboats and paddleboards, which were all free to use. There were also the usual other water toys available for rent, like sailboats, Jet Skis and parasails. But no one was out there pushing you to rent them like on the beach in Playa Del Carmen. It was all very chill.

Seaweed washed onshore during much of the year, as it does along the entire Mexican Riviera, but Mayakoba had a staff of dozens who collected the seaweed every morning, took it away and turned it into fertilizer for the golf course. So there was very little seaweed on shore during the day.

The beach pool was freeform and zero-entry, which was really nice to relax in and good for little ones. The drop-off was dramatic, to about 5 feet. The lagoon pool was a bit smaller but just as nice. Service was quite good, with staff bringing as many towels as we wanted with no hassle, and an ice bucket of cold bottled water on our own little table. The usual array of poolside food and beverages were available and came pretty fast after we ordered.

After brunch, we were invited on a private boat tour of the property that left from a little dock in the lagoon near the restaurants. Anyone could get this free tour at 11:00am or 3:00pm daily, but they arranged one for us after brunch. Lasting about an hour, it was a nice, quiet ride through the jungle and all the other resorts, and we saw all sorts of birds, fish and other wildlife. Our captain was an excellent guide and informative. We could also rent canoes and explore on our own.

There was also a gorgeous Greg Norman-designed championship golf course, which hosted the PGA Tour each November.

Golf carts were plentiful and usually there when you needed one. You could also call the operator, and a cart would appear within five minutes.

I got a WhatsApp number to text requests from my cell phone. This turned out to be handy, because I could essentially request anything from anywhere. Housekeeping or concierge requests, dining reservations, valet and, of course, cart transportation. I'm surprised more hotels don't have this feature.

Available for use were a large number of single-speed bicycles near all the rooms, which you could use anytime and take most anywhere on the very scenic property. It was about a mile between the beach and the lagoon areas, and it was an easy ride. I'm not a big biking guy, but there was a wonderful little paved nature trail that connected the four resorts and a little shopping village with nifty shops and a chapel. There was also a place where you could take local cooking classes. When we stopped at the lobby of each of the other resorts, we were welcomed with bottles of cold water from almost all of them.

The resort was a marvel of engineering. The whole property had been hacked and carved our of the thick, lush jungle and meticulously manicured into a paradise. There were signs everywhere of the jungle trying to reclaim the land, but the staff did a fabulous job of keeping nature at bay. Taking a page from the Disney World playbook, there were small lizards, geckos and iguanas everywhere to help control the insect population. There was complimentary bug repellent in the closet, but we never needed it, as no one got a single bite. There was also a complement of trained hawks that the staff deployed to keep seagulls and crows away from filching our pool snacks. As for security, we always felt safe wherever we went on the property.

Mayakoba is a destination for a more relaxed and chill vacation experience. If you need to stay in a tower, next to a nightclub or around the corner from a huge shopping mall, then you're better off in Playa Del Carmen or Cancun. The Andaz Mayakoba is an excellent, professionally run hotel, with a warm, friendly staff and lots of fun stuff to do. If you have limited mobility, though, it might not be the best choice, because things are spread out a bit and not as concentrated as in a standard hotel. We look forward to returning soon.

Daniel Hank is a seasoned road warrior, who’s traveled to all seven continents. He works as a film and television producer based in New York.