These are the 11 women in aviation who inspired my career 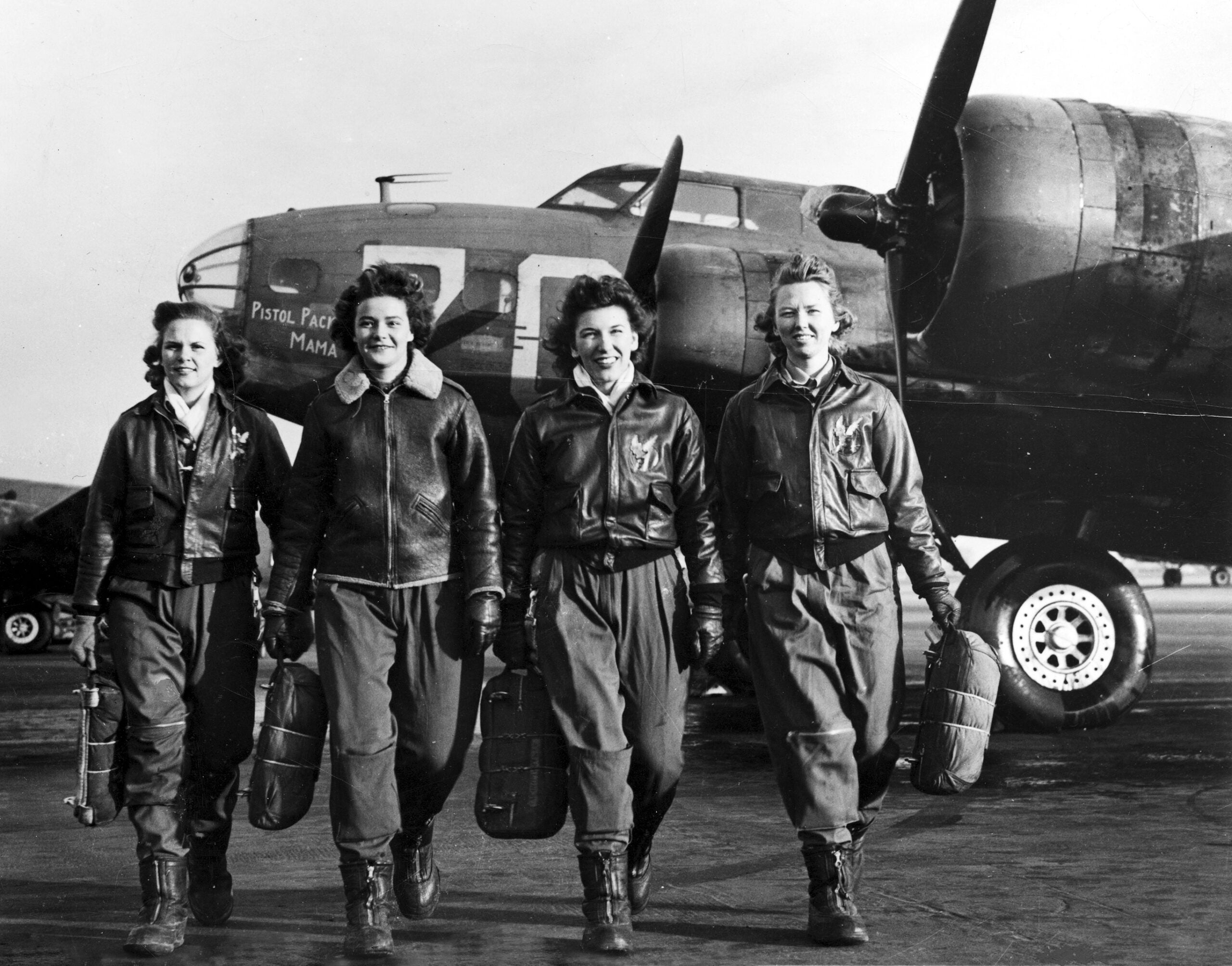 My love affair with aviation began at the tender age of 6, when I took my first flight from John F. Kennedy International Airport (JFK) to London's Heathrow Airport (LHR) on a Pan Am Boeing 747 in 1970, the same year the jumbo jet first entered service.

I was blessed to have parents who indulged my fascination with airplanes, buying me books on the history of aviation (I was a true AvGeek) and carting me to airports to watch planes take off and land.

It hadn't occurred to me that I could make a living writing about my childhood hobby until I saw a posting for a job at a new publication covering commercial aviation in The Washington Post's classified ads in 1992. I ended up applying (and getting) the job, and the rest, as they say, is history.

Now, here I am celebrating my 30th anniversary in the aviation industry.

While the aviation industry remains one that is overwhelmingly dominated by white men, I was still blessed to have female role models to look up to when I started my career 30 years ago. So, to celebrate Women's History Month, I'm reflecting on the 11 women who were instrumental in helping me get to where I am today.

Thirty years ago, I stumbled upon an ad for an associate editor at a weekly newspaper. Said newspaper (now-defunct Commercial Aviation News) was helmed at the time by Evamarie Socha, the publication's managing editor.

Although I had never written about aviation, Socha took a gamble by choosing me for the job. It was my first true newspaper job and, as a result, where I learned much of what I know about the industry. As she showed me the ropes, I became even more passionate about everything related to aviation.

Despite getting laid off in 1993 a few months before the paper shut down, I never forgot how pivotal Socha, who is now the director of communications and public relations at the National Defense Industrial Association, was in helping me establish my aviation journalism career. Who knows where I'd be today had it not been for her decision to take a chance on me.

By September 1993, I found myself in a new role as the editor of now-defunct Commuter/Regional Airline News. While I had interviewed with Kelly Murphy, who oversaw the weekly aviation newsletters, by the time I started, Murphy had left. Her departure was far from welcome news.

Now left to learn the ins and outs of a new position on my own while the company (then called Phillips Publishing International) took all of its employees to Disney World to celebrate a sales milestone, I found myself wondering what I'd gotten myself into.

Desperate for help, I called Murphy.

Not only did Murphy (who is currently the director of communications at Women in Aviation International and editor-in-chief at Aviation for Women magazine) help me get the newsletter to press, but she also gave me industry names and contacts and personally asked others she knew to assist. I will always be grateful for what Murphy did at that moment.

As I started advancing in my career, I began building a more extensive network of contacts in the industry, including Debby McElroy.

Serving as the president of the Regional Airline Association when I met her, McElroy took me under her wing and taught me how to navigate an industry full of white men with grace and fierce determination.

Even when we both changed jobs, McElroy was still someone I could turn to for guidance. Although she has since retired from her most recent position as executive vice president at Airports Council International-North America, an organization that advocates for airports, I suspect she's still traveling the world fueling her passion for aviation.

When I met Cassandra Bosco and Shelly Snyder Simi in 1994, they were working for the National Business Aviation Association and the General Aircraft Manufacturers Association, respectively. At the time, I had recently started covering business aviation, as regional aircraft manufacturers were beginning to sell variants of their turboprops and jets.

I was so green, but Bosco and Simi were more than willing to help me navigate this new sector, encouraging me and helping me when I had questions and needed sources.

Without Bosco, who owns the consulting firm Tailwinds Communications, and Simi, the cofounder of the National Coalition for Aviation and Space Education, I would not have become one of the inaugural members of Women In Aviation International.

This organization has not only been a vital part of my life but has also played a part in theirs, so much so that they have been inducted into its Pioneer Hall of Fame.

Related: International Women’s Day: Inspiring the next generation of aviators

Back in 1995 when I was doing a story on the cargo operations at Orlando International Airport (MCO), I found myself connecting with Carolyn Fennell, who has been involved with just about everything related to the airport since 1980.

Chatting with Fennell had a profound impact on me, as she was one of the few Black women I knew at the time who was navigating the industry. It was great to see someone who looked like me approaching the industry with her own unique style.

We remained in touch, and even with her busy schedule as the Greater Orlando Aviation Authority's senior director of public affairs, Fennell is someone I know I can turn to when I need career advice — or tough love. She will always be my one-woman hype squad and an invaluable resource both professionally and personally.

I first met Angela Gittens in 2008 when she was named the director general of Airports Council International. Formerly in high-level roles at Miami, Atlanta and San Francisco's airports, Gittens was another Black aviation expert I could look up to as I covered airports.

She not only served as an amazing Black female mentor of mine in my early years but as a supportive friend when I was laid off from my dream job at Aviation Week in 2011. After learning of my layoff, Gittens called to give me a pep talk and offer me a job on her staff, an incredibly kind gesture.

While Gittens is now retired, she will always be cheering me and others in the industry on.

I hired Mary Kirby to write for World Airline News, a weekly newsletter, in 1998 when she was fresh out of college, and I quickly became impressed with everything about her. She caught on to the industry fast and soon established herself as a respected industry expert.

A couple of years later, when she started Kirby Media Group, a company that provides news, events consultancy and media services to the aviation industry, she also gave me the chance to write for the organization's aviation news platform, Runway Girl Network. To this day, I'm beyond proud to have been one of RGN's original writers.

Related: Where Are All the Women CEOs in Aviation?

In between traditional journalism roles, I decided to move to Atlanta and take a position with Delta Air Lines' corporate communications team in 2004.

On my first day of work, Delta began laying off nearly 7,000 workers, including a significant number of corporate communications employees. Two days later, it was all hands on deck for a global press conference and event covering what Delta was going to do to stave off a Chapter 11 bankruptcy filing.

Unsurprisingly, I was overwhelmed and a bit traumatized, questioning my decision to take this position. Picking up on my need for help, Keyra Lynn-Johnson and Jenny Dervin, two general managers in the department, swooped in to assist. They caught me up on everything I needed to know and showed me how to lead during the most challenging time in the airline's history.

Without Lynn-Johnson and Dervin's guidance, I'm not sure how I would've navigated such a difficult situation. I will forever cheer them on as they continue to be important figures in the aviation world as leaders at Delta and aerospace manufacturer Pratt & Whitney, respectively.

I have never met Capt. Theresa Claiborne, but she has been a source of inspiration throughout my career in aviation.

I'm the daughter and granddaughter of U.S. Air Force officers, so naturally, Claiborne's background as the first Black female pilot in the Air Force, first Black female air commander and first Black female instructor pilot of the KC-135 aerial refueling aircraft stands out. Not to mention, she’s one of two Black women with the captain title at United and has experience as a captain on the Boeing 747, my favorite aircraft.

Currently, Claiborne flies the Boeing 787 Dreamliner, continuing to be a force in the industry and a groundbreaking figure for aspiring Black female pilots and AvGeeks (like me).

Related stories
First, Club Suite and the rest: Flying the British Airways 777 in all 4 cabins
10 best hotels to see the northern lights
You won’t want to miss New York City’s newest immersive art space
New welcome offers: Earn up to 150,000 points on these Marriott Bonvoy credit cards
Featured photo by HUM Images/Universal Images Grou
Editorial disclaimer: Opinions expressed here are the author’s alone, not those of any bank, credit card issuer, airline or hotel chain, and have not been reviewed, approved or otherwise endorsed by any of these entities.