International Women's Day: Inspiring the next generation of aviators 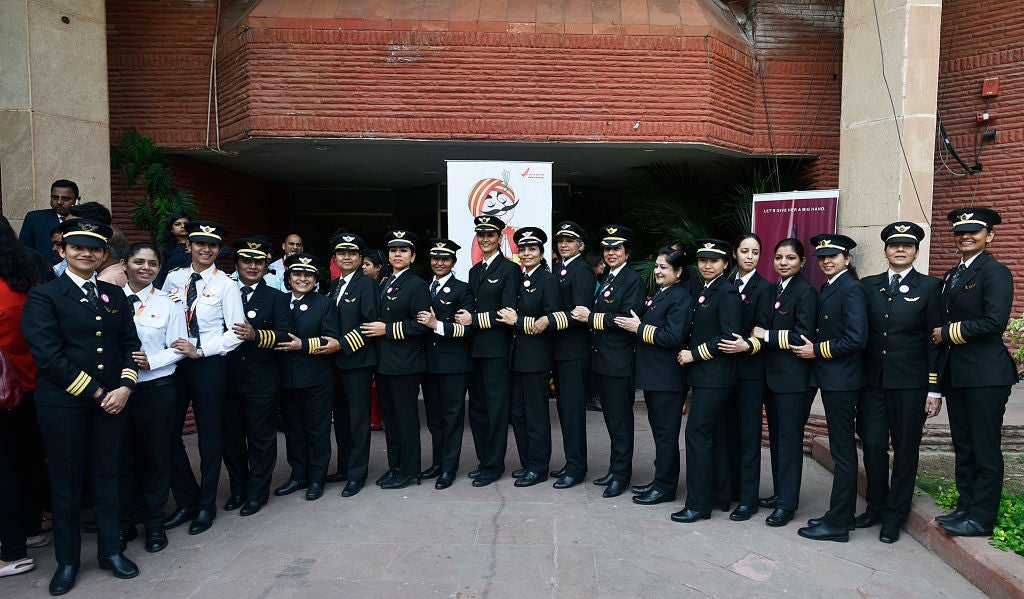 From the start, women have played a major role in building up the aviation industry yet there is still very little representation in the upper deck, with limited improvements.

However, over the years, women have fought for more representation in the industry and now have the opportunity to become pilots, ground crew and executives. The question is, do little girls know this? To celebrate International Women's Day, TPG is diving into the history of women in aviation, but most importantly — how women in the industry have progressed and are empowering future generations of aviators.

For starters, the decision-makers in the industry need to recognize where they can improve and support initiatives aimed at diversifying the landscape.

A brief history of women in aviation

On March 8, 1910, Raymonde de Laroche became the first woman in the world to earn her pilot’s license from the Fédération Aéronautique Internationale. In 1975, the United Nations coincidently proclaimed March 8 as International Women's Day, honoring the social, economic, cultural and political achievements of women.

Today, TPG is celebrating women in aviation. For years, women interested in the aviation industry could only aspire to be flight attendants — or as they called them, flight stewardesses. Ellen Church became the world's first female flight attendant on May 15, 1930, at 25 years-old. She had originally wanted to become a pilot but was instead encouraged to become a flight stewardess by Steve Simpson, a Boeing Air Transport manager in San Francisco. Church was a registered nurse, which became the preferred occupation for flight attendants. On top of that, there were some other very particular requirements, such as a strict age cutoff (typically between 32 and 35) and a no-marriage policy.

Fast forward nearly 40 years and finally, the first women, Emily Howell Warner, was hired as an air transport pilot for a modern, jet-equipped scheduled airline (Frontier Airlines) and Bonnie Tiburzi took the controls as the first female pilot for a major U.S. commercial airline (American Airlines) at the age of 24. Both of these major achievements didn't happen until 1973.

Related: Where are all the women CEOs in Aviation?

And to put the gender gap into perspective even more, it wasn't until December 2018 that the first woman became the CEO of a major airline. That woman is Anne Rigail, CEO of Air France.

As you can see, the aviation industry is an especially difficult one for women to advance in. However, there are some very motivating women who are committed to helping their peers grow while also inspiring the younger generation to get interested.

Female representation in the cockpit remains limited. Women make up less than 5% of airline pilots in the U.S., according to the Federal Aviation Administration's 2019 U.S. Civil Airmen statistics data. Although this number is low, the industry has seen a 27% increase in women filling airline transport pilot positions since 2009 and Deborah Donnelly-McLay, an international Boeing 767 captain with United Parcel Service, is hopeful this trend will continue.

“There's a lot of opportunity awaiting in aviation. And that doesn't include the sectors that haven't really developed yet -- commercial space travel, drone operation. So there are many different areas,” she says.

It's a good time for women to be entering the aviation workforce: The industry will need to fill new jobs as the demand for air travel grows. Boeing’s 20-year forecast foresees a need for hundreds of thousands of new pilots in the next two decades (along with more than a million openings for cabin crew and technicians).

The scarcity of women in the cockpit also contributes to the lack of female representation there: “If people don't see someone looking like them, a woman, then they can’t possibly imagine that they can do it. But if they see someone that's them, in a uniform, then they can dream what is possible,” explains Deborah Hecker, chief pilot at DFW for American Airlines.

Now in a managerial position, Hecker has been in the aviation industry for more than 30 years. During her career, she became the first dual-qualified pilot and flight attendant in AA history. TPG talked with Hecker in 2020.

When asked what sort of changes she’s noticed, Hecker says, “the numbers aren't really changing in terms of the amount of women, but I’ve noticed that the outreach is changing and there's more and more emphasis on encouraging ... Social media has done an incredible job of connecting us as women ... When I was flying, it was just me. I was alone until I joined Women in Aviation.”

Donnelly-McLay agrees. She’s been flying since she was 18 years old and has more than 25 years of experience in the aviation industry. As a member of Women in Aviation as well, Donnelly-McLay explains how she feels a sense of camaraderie and mentorship through the group. She believes reaching young women interested in aviation is the first step to encouraging more women to pursue a career in the field.

“I've gone into schools to do career days and so many of the little girls have said, ‘I never knew that women could be pilots,’ because they've never seen anybody,” she says.

Organizations like Women in Aviation International are doing just that. Molly Martin, outreach director for WAI, told TPG in 2020 of their annual convention, “It feeds your soul. It's unbelievable. You can walk through the crowd, and you'll walk right past Eileen Collins (first female commander of a Space Shuttle mission in 1995),” she says.

The WAI conference is held every March in honor of Women’s History Month. Hopefully, the convention will resume next year. The WAI is also celebrating its seventh Girls in Aviation Day this September.

As women continue to grow in strength in the aviation community, airlines are also working to improve the number of women in flight.

British Airways' female crew members often speak at schools, and American Airlines has several outreach initiatives. One of AA's highlights is its “Girls Rock Wings” event in partnership with Sisters of the Skies. The purpose of the event is to expose and inspire African American girls ages 8-13 to consider careers as pilots. AA also offers commercial pilot training through the American Airlines Cadet Academy. Enrollment in is almost 30% female, AA said in an email last year.

Similarly, Alaska Airlines is focused on the growth of future women in aviation "by participating in community events and awarding scholarships to women at diversity conferences, including Sisters of the Skies, Women in Aviation and Organization of Black Aerospace Professionals (OBAP), to name a few. In 2019, the Women in Aviation recruiting event resulted in the hiring of 12 female pilots. We’re focused on cultivating a diverse and inclusive workplace, including increased female representation not just in pilot positions but across the organization." Alaska shared in an email.

Airlines across the industry are making strides to hire more women, but as of 2020, at the executive level women make up only 3% of all airline CEOs, according to the International Air Transport Association (IATA).

“This industry is obviously very challenged because you don't have a lot of senior women at higher levels within the industry,” Joanna Geraghty, the president and COO of JetBlue Airways, says.

However, Geraghty wants the industry to celebrate how far it's come in recent years and set an example for future generations of women in aviation. In her role, she’s constantly looking for ways to improve gender parity.

“I don't think there's a silver bullet,” she says. “It starts from the bottom up. It starts from children. It starts at all levels of the organization to create a path for women and create a safe place for women and other candidates where they feel comfortable to express their opinions because there's somebody that's similar to you in a room. It's amazing what the studies show around how much more comfortable people are about speaking up if they feel they have an ally in a room.”

Geraghty has been with JetBlue for more than 15 years and outlined the airline's initiative to engage with and recruit more women, as well as tapping into the younger generation of aviators. Geraghty serves as board director of the JetBlue Foundation, which supports students from diverse backgrounds and invests in STEM education.

“Our job is to continue to look for those opportunities so that kids can see in themselves a pilot or an in-flight crewmember or a technician or the foundation,” she says. “The foundation is very much focused on removing those barriers, encouraging STEM education at an early age and trying to encourage young aviators because it's a career we all love.”

Representation and visibility are important: “If you get into a plane and you see two women flying an aircraft and you're a little girl, that's a really cool experience and we've had customers write in about that," Geraghty says. "We had one customer that wrote to me personally that mentioned how her son, who is African American, got on a plane, had two African American pilots and how inspired he was by that. Kids remember those things."

Representation and visibility are key to diversifying the aviation industry so that today's kids can aspire to be tomorrow's pilots, flight attendants and industry leaders.

Related stories
Great deal: Book business class tickets at premium economy prices with this Avianca LifeMiles sale
Holiday gift guide: TPG’s 22 travel-friendly picks for 2022
Vail Resorts lift-ticket sales capped; buy your Epic Pass by Dec. 4
These Black Friday hotel deals can save you hundreds on your next stay
Featured image by Hindustan Times via Getty Images
Editorial disclaimer: Opinions expressed here are the author’s alone, not those of any bank, credit card issuer, airline or hotel chain, and have not been reviewed, approved or otherwise endorsed by any of these entities.