Articles
Summer Hull , aka Mommy Points, ran the Mommy Points site for families who want to travel more for less using miles and points for seven years. She now heads up a variety of special projects at TPG when she isn't exploring the world with her own two girls.
Follow
Oct. 10, 2022
•
8 min read 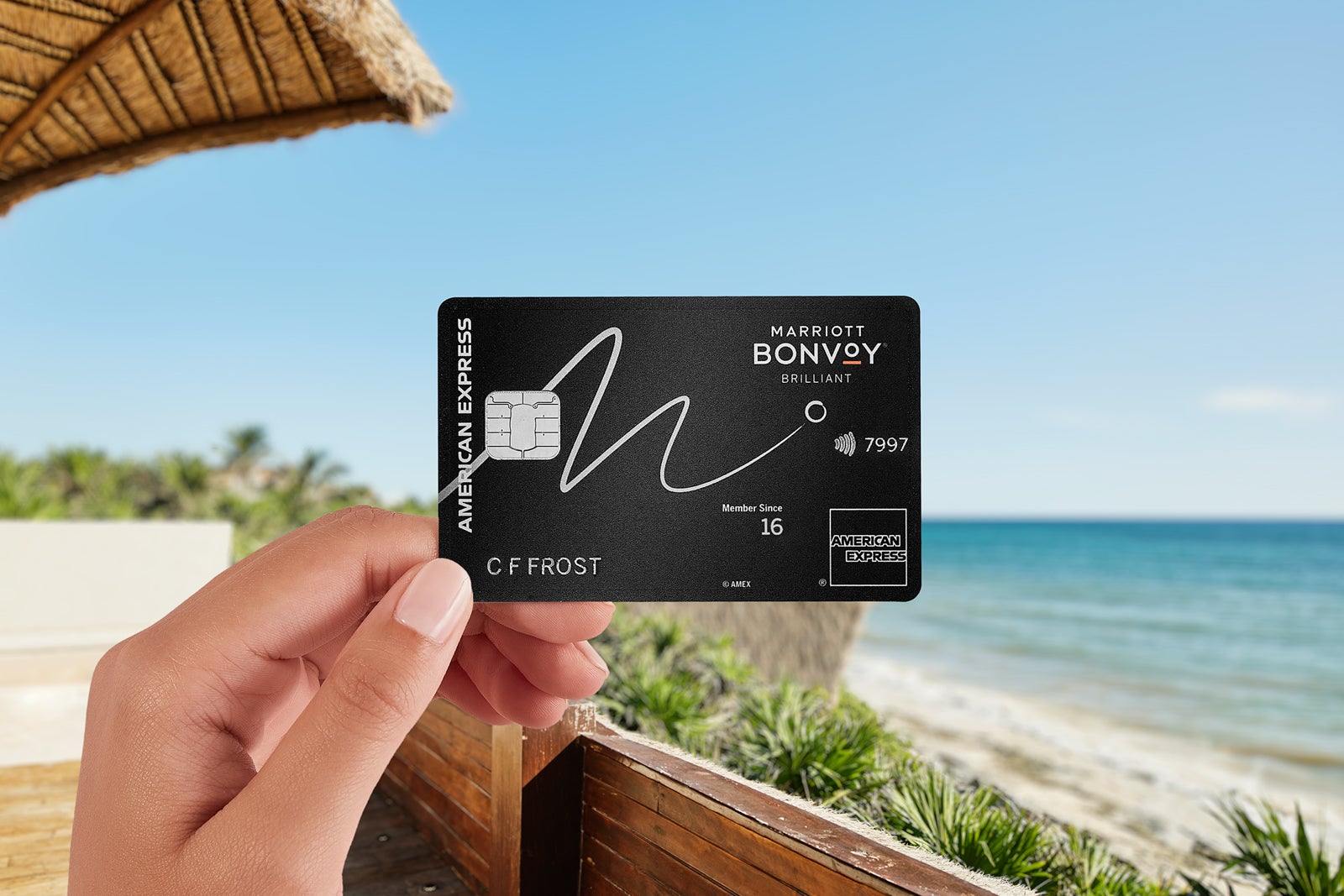 Many years ago, there was really only one major rewards credit card that cost more than around $100 per year — and that was the ubiquitous Platinum Card® from American Express. If you wanted to get into a Centurion Lounge — which at the time was in a league of its own — you didn't leave home without it.

But that was then. Now, many rewards credit cards cost several hundred dollars per year and one cobranded Marriott credit card, the Marriott Bonvoy Brilliant® American Express® Card, just bumped up its annual fee from an already-high $450 per year to a somewhat jaw-dropping $650 per year (see rates and fees).

But here's potentially the even crazier part than the $200 increase for a hotel credit card — now I want the card even more.

And no, this is not because of some weird and deranged desire to have the most premium of credit cards in my wallet. It's because it would now save me more money than it ever could have before.

Here's how that math works out — and why I now really want to get my hands on the Marriott Bonvoy Brilliant.

I travel a lot, but with a largely remote job, two kids, a spouse, a dog and a cat back home, I don't live for months of the year on the road. This makes keeping top-tier elite status in multiple programs somewhere between a stretch and an impossibility. It was simpler during the heart of the pandemic as qualification criteria were relaxed, but as that phase is ending, it's become tough once again.

On paper, Marriott requires eligible 50 nights in a hotel per year to earn and maintain Platinum status. But there are ways to reduce that true number down, such as by getting a 15- to 25-night head-start on elite status by having a personal Marriott card such as the Marriott Bonvoy Boundless Card — and potentially another 15 elite nights credited by holding a small-business card such as the Marriott Bonvoy Business® American Express®.

I've currently got a couple of Marriott credit cards — but both are of the small-business variety, so I only get 15 nights per year credited out of the 50 I need. It's October already and I'm currently just at 30 nights out of 50 needed for 2022, receiving 15 nights from one of my cards and the other 15 from paid stays. Frankly, I'm not sure how I'm going to close the gap fully without wasting money (or points) and time on stays I don't really need. But because I can't pull myself off the status hamster wheel, odds are high I'll try and find a way if I have to.

However, if I was able to add the Bonvoy Brilliant to my arsenal, my Marriott elite status work would be done — not just for this year — but every year.

TPG values Marriott Platinum status at $2,475. I'm not sure that's my own personal valuation based on my travel patterns, but I'd say I get well over $1,000 in tangible value out of having the status every year between the additional points earned on paid stays, the breakfast benefit, lounge access and suite upgrades.

Here's an entire article I wrote on why I want to keep Marriott Platinum status for as long as possible.

While Marriott Platinum status admittedly doesn't matter much at a random Fairfield Inn, it makes a whole lot of difference somewhere like the St. Regis New York, the Autograph Collection property in Vail or even the Swan Reserve at Walt Disney World. And while I don't have those higher-end Marriott stays all the time, I do usually have a few a year where status makes a big difference in terms of breakfast, amenities and suites.

Frankly, because I know I'll get my money back from the elite benefits, the Platinum status alone would be worth a $650 fee without worrying about earning it.

It's true that $650 is a whole lot of cash each year for one credit card — even if it does unlock Platinum perks.

Fortunately, it isn't really that high of a true cost if you use the built-in $300 in dining credits. While these are perhaps not quite as easy to use as the former $300 in Marriott credits that could be used all at once, we all still have to eat, and as long as you have a system to remember to spend $25 on dining each month on the card, it drops the true out-of-pocket cost from $650 to $350.

My trick to using these sorts of monthly dining credits is to load our Chick-fil-A app with $25 each month at the beginning of the month. Then when it's our turn to get the nugget tray for school parties or we just are craving some Chick-n-Minis, we are good to go.

You could presumably do it with Starbucks, too, if that's more your jam. Or just remember to use the card when you go out to eat.

Another perk that makes me really want the revamped Marriott Bonvoy Brilliant card more than ever is the annual award night which is now worth 85,000 points (instead of the previous 50,000 points). Of course, it's also true that Marriott's program is now charging more for some properties than it used to, so you probably need the higher-value certificate just to book what you want in some cases.

Be that as it may, I'd love to get my hands on a Marriott 85,000-point certificate. Since you can add up to 15,000 Marriott points to a certificate, you can pick from most Marriott properties around the world that cost up to 100,000 points with the certificate and a "top off."

I'd try to find nights where I could use the certificate at a hotel such as the new Ritz-Carlton New York, NoMad which otherwise would be well out of my price league at $1,500 or more most nights. I'd say that's more than getting your money's worth if you can cash in for something like that. (Even though Ritz-Carlton is quite weak when it comes to Marriott Platinum perks.)

Last but certainly not least, if you get the Amex Bonvoy Brilliant card before Jan. 11, 2023, you can also get a 150,000-point Marriott welcome bonus as long as you spend $5,000 on the card in the first three months. That's a nice shot of points that can be used in an almost endless number of ways.

I'd probably earmark them for either an eventual (fingers-crossed) one-day blowout return to the Maldives or similar for a big round number birthday ... or use them in a bit more practical fashion for several nights on a Disney trip with a stay at the Walt Disney World Swan, Dolphin or Swan Reserve hotels. There's really no wrong way to use welcome bonus points.

I've recently bought Marriott points at 0.83 cents each, so I think the TPG valuation of 0.84 cents each is about right on the money for this one.

Being pretty realistic about what these perks are worth now on the Bonvoy Brilliant, I think I'd easily get over $2,900 in value from having this card in the first year, including the welcome bonus points. I'd also say "thank you very much" for the 150,000 bonus points, although that honestly wouldn't be the main reason for me to get the card since it's a one-and-done opportunity.

I'd be keeping the card for the $1,700 in ongoing, real-world value I assign to the benefits other than the welcome bonus. Just not having to worry about how I'd hit Marriott Platinum status each year would be a treat.

So yeah, it probably sounds crazy at first glance, but as soon as I'm in a position to apply for my next credit card, I'd love it if I were able to get the Marriott Bonvoy Brilliant. Yes, the fee is higher than ever — by a lot. But at least for me, it's also a better overall deal than ever before.

Official application link: Marriott Bonvoy Brilliant Amex with 150,000 bonus points after you spend $5,000 on purchases in the first three months from account opening.

For rates and fees of the Marriott Bonvoy Brilliant Amex, click here.

Featured image by AMERICAN EXPRESS
Editorial disclaimer: Opinions expressed here are the author’s alone, not those of any bank, credit card issuer, airline or hotel chain, and have not been reviewed, approved or otherwise endorsed by any of these entities.