Why Is Rome Drowning in Trash? 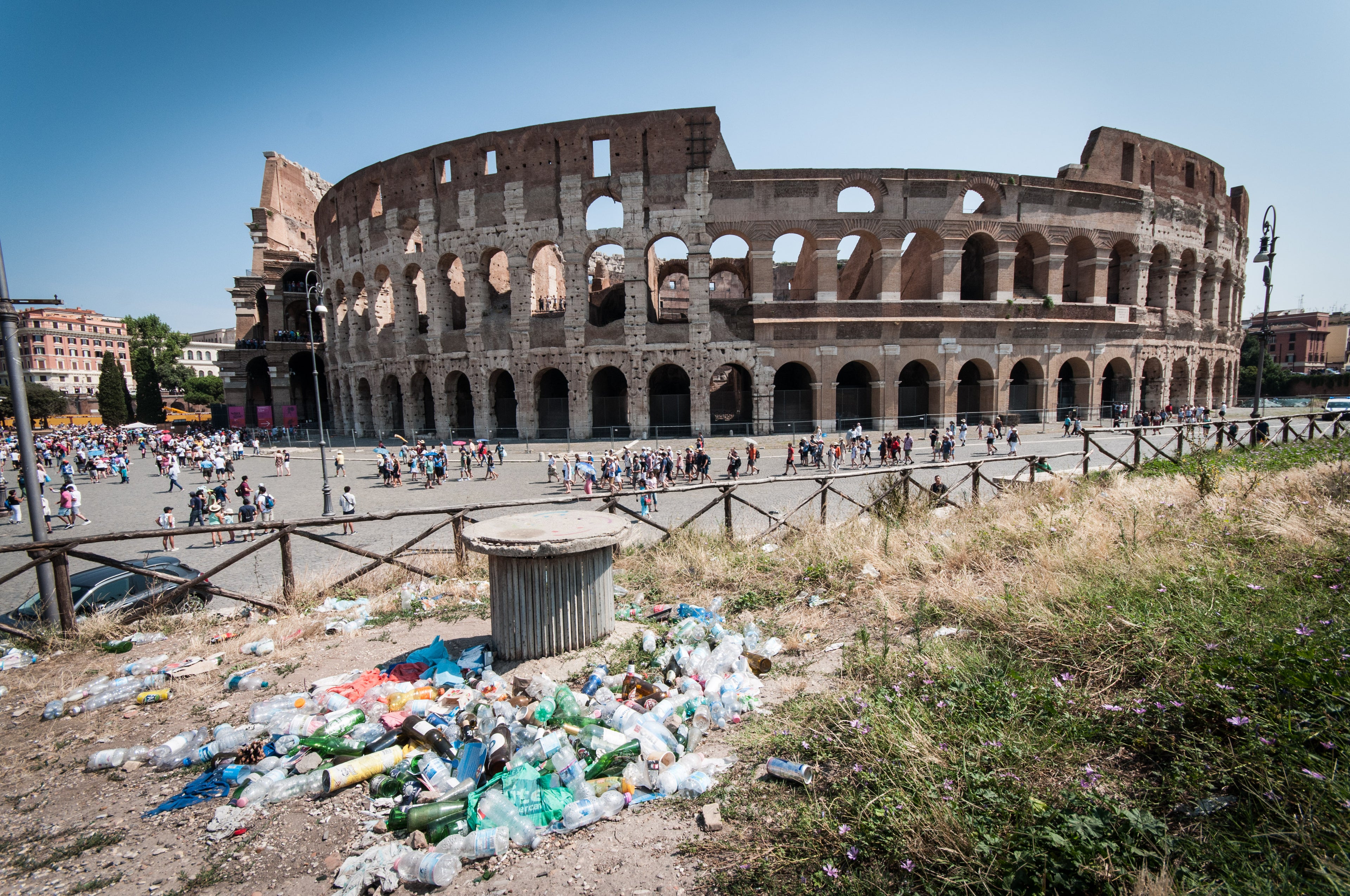 Why Is Rome Drowning in Trash?
This post contains references to products from one or more of our advertisers. We may receive compensation when you click on links to those products. Terms apply to the offers listed on this page. For an explanation of our Advertising Policy, visit this page.

That’s not exactly what visitors to Rome expect from the Eternal City. But the Italian capital’s never-ending garbage crisis has inevitably become one of its trademarks — and risks condemning Romans and visitors alike to eternal despair. Chances are that if you are one of the more than 20 million people who visit Rome every year, or plan to be one, you've bumped into heaps of uncollected trash, or will.

But how did one of the greatest cities on the Earth turn into an open-air dump?

The history of Rome’s dysfunctional waste management is decades long, and begins with a “big, black hole.” That’s how Romans used to call the Malagrotta landfill, once the largest in Europe, and the only site devoted to the city's garbage disposal for about 30 years, until it was closed in 2013.

Malagrotta owner Manlio Cerroni — a garbage-disposal magnate known as “Il Supremo” — held a monopoly over trash removal in and around the Italian capital for years, until European authorities ruled that the massive landfill was unfit to treat waste, leading to its closure. Since then, Rome has been left with no major site to dump or treat the 1.7 million metric tons of trash it produces every year, and no real strategy for recycling, as successive mayors from different parties all proved incapable of solving the waste emergency.

Collection, treatment and disposal of Rome’s garbage has always been in the hands of a small group of private interests — sometimes, according to prosecutors, colluding with organized crime. And Romans pay one of Italy’s highest municipal-waste taxes. These days, most of Rome’s garbage is shipped to other Italian regions or abroad. Only 40% gets collected separately and recycled. The capital exports 1.2 million tons of its garbage every year, at a cost of 180 million euros ($206 million). As for the remaining half-million tons, these days it seems that a lot of it sits uncollected for weeks.

“It’s a long story involving different parties and it hasn’t improved in the past few years," said Alessandro Lanza, a professor of energy and environmental policy at Rome’s LUISS University. "The only real decision was to close Malagrotta, but then it was followed by nothing.”

A new mayor was elected in 2016 on a campaign promise to fix the crisis. Virginia Raggi, a lawyer in her 30s, ran on a sweeping change platform with the anti-establishment Five Star Movement. She won in a landslide with 67% of the vote, the first female mayor in Roman history. After a stormy two and a half years in power, Raggi’s promises are far from being fulfilled. Thousands of outraged residents decrying the degradation of the Eternal City to "an open sewer" filled the Renaissance piazza in front of City Hall in October.

Last December, a huge fire at one of the remaining waste-disposal sites, the so-called Salario plant, blanketed the densely populated northeast of the city in toxic smoke — and put out of action the facility that treated a quarter of Rome's garbage. The fire added to the emergency and forced the city and regional administrations, often at odds for political reasons, to scramble for alternative facilities. That also coincided with the holiday season, when huge amounts of discarded gift packaging hit the streets. Uncollected trash has been piling up since Christmas Eve, and some residents have been setting it on fire as a sign of protest. Scenes of overflowing dumpsters and bags spilling out their stinky content were splashed by Romans and shocked tourists on social media.

After the Salario plant fire, Italy's Environment minister Sergio Costa created a task force to tackle the waste crisis. Rome police began an investigation into the cause of the blaze, with sabotage and arson among the possible causes. Amid increasing trash chaos, Raggi appealed to local authorities in Lazio and other regions to lend a hand and open their landfills to Rome's waste as a stopgap solution. But in a Facebook post published after the holiday spike in the waste crisis, the mayor insisted that Rome doesn’t need a new dump or new incinerators. “Romans don’t deserve this non-solution, which would end up sweeping the dust under the carpet once again,” she wrote. Raggi and her Five-Star party support a plan focusing on what they call a “Zero Waste” and “circular economy” strategy, based on composting and recycling organic materials.

“City managers have demonstrated they are completely unfit to design an effective strategy able to address Rome’s waste problem,” said Christian Raimo, a writer who also serves as a local administrator in one of Rome’s boroughs, and supported protests against the polluting Salario plant. “The only thing Rome politicians managed to do was rush to face cyclical emergencies," he said. "But they totally failed to create new facilities able to treat Rome’s waste with new recycling technologies, as happened in many other Italian cities."

Since the Malagrotta landfill closed in September 2013, many other sites were suggested as replacements, but none of them became operational. They all faced staunch opposition by local residents and mayors. “Having a real waste strategy needs creating an adequate culture and includes meeting people and talking to them. Rome’s politicians, especially in the past few years, never bothered to do that,” Raimo said.

Raggi did have a plan, to be fair. The 2017-2021 plan mainly sought to gradually expand door-to-door waste collection from a few neighborhoods to the whole city, setting an ambitious target of 70% of waste collected separately for recycling by 2021.

According to official data, however, separate collection was stuck at around 44% in 2018, falling short of the 50% target. It has been hovering around that percentage in the past three years. Resistance to change from residents is to blame, too, not just mismanagement.

“Raggi’s 70% objective for 2021 looks unreachable,” said Estella Marino, who ran the city's environment department in the center-left administration led by Raggi’s predecessor Ignazio Marino (no relation), which ended prematurely amid an accounting scandal in 2015.

AMA, the city-owned company in charge of collecting Rome’s garbage, is also in serious trouble. It's 600 million euros in debt, and some of its former managers are being investigated, along with dozens of local officials and mobsters, in a corruption probe by Rome prosecutors. They are accused of teaming up to rig bids for city contracts.

Yet AMA boss Lorenzo Bacagnani recently pledged that Rome will become “a model for Europe in waste management.” AMA wants to build 13 new facilities, including three specialized in recycling organic waste. The new system should be able to process 880,000 tons of recyclable waste every year, according to the plan. That would go a long way towards solving Rome's garbage problem.

Environmental experts, however, warn that this implies overcoming the resistance of local residents, and takes years. The north of Italy, said Lanza, the environmental policy professor, "was much more far-sighted in waste management" and is getting into producing energy from burning trash, while Rome still doesn't know what to with its garbage.

Plans to manage Rome’s waste “are apparently good on paper, but the timing for implementation and investments remains pretty vague,” he said. As an alternative, Rome can always decide to continue exporting most of its garbage — “but that obviously comes with high costs,” Lanza said. And in the meantime, trash in the streets of the Eternal City is not going away.

Our points-obsessed staff uses a plethora of credit cards on a daily basis. If anyone on our team wouldn’t recommend it to a friend or a family member, we wouldn’t recommend it on The Points Guy either. Our opinions are our own, and have not been reviewed, approved, or endorsed by our advertising partners.
See all best card offers
Related stories
News
Earn bonus points on paid stays with IHG's Cyber Monday promotion
Deals
Today only: Save up to 50% on United award flights to Asia, Australia and Europe
Guide
Cyber Monday deal roundup: Luggage, headphones and travel accessories on sale today
News
Deal stacking: What TPG staffers are really buying on Cyber Monday