Why I Loved JetSmarter — Until I Didn't 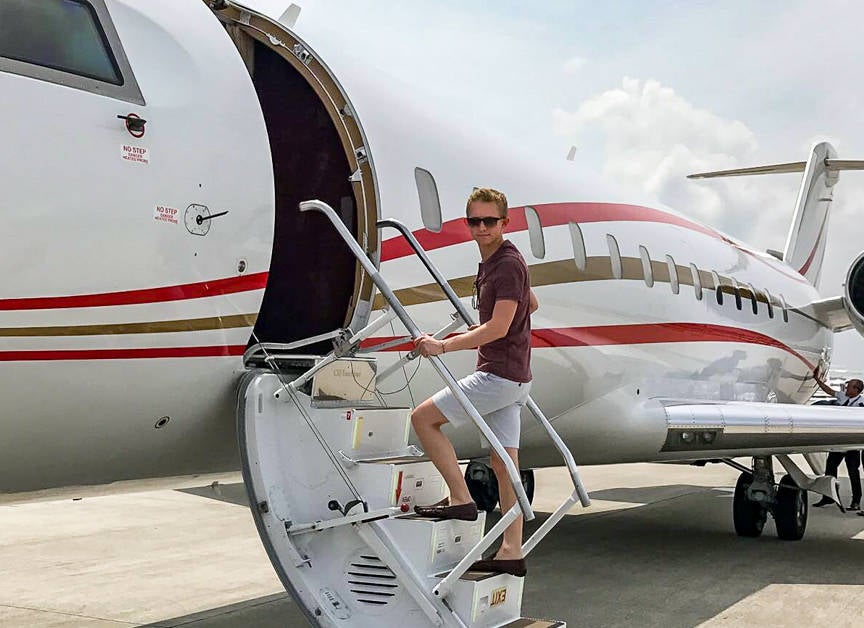 Why I Loved JetSmarter — Until I Didn't
This post contains references to products from one or more of our advertisers. We may receive compensation when you click on links to those products. Terms apply to the offers listed on this page. For an explanation of our Advertising Policy, visit this page.

The email held out the promise that Bryce Bayens would be taking his flying to the next level, going from sitting in commercial jets over a bag of cold nuts to hobnobbing over flutes of Champagne with the rich and the famous on private aircraft.

The price? One dollar.

Three months later, Bayens decided to go all-in and plunked down $15,000 to continue to live the private-jet life to which he’d quickly become accustomed.

It’s now two years later, and Bayens expects to get about $1,000 of his money back in the legal fallout from one of the most spectacular business failures in recent aviation history: JetSmarter, the company that was supposed to revolutionize air travel but ended up in court and brushed off by many as a half-baked business model at best, and an outright scam at worst. An arbitration agreement is about to see the Fort Lauderdale-based company pay thousands of customers who brought a class-action lawsuit against it between $250 and $7,000 each, ending at least one of the beleaguered company’s legal woes.

JetSmarter was bought by Dubai-based Vista Global, which combined it with the charter-jet company XOJET to form the newly rebranded XO in June.

But Bayens — the owner of an Amazon store whom the arbitrator stuck into the category of customers most hurt by the company — still remembers the glory days of JetSmarter fondly.

It was mid-2017, and the Atlanta resident, then 21, had 1 million American Express points sitting in his account. A JetSmarter promotion said that entitled him to a 24-karat gold membership card and that nearly free three-month trial of the JetSmarter service, which he leapt on. He filled out the JetSmarter application and sent them proof of the size of his Amex account, and they approved him.

“They gave me the membership called Simple, which entitled me to two free tokens and two free seats on empty legs,” Bayens said in a telephone interview. “My first shuttle that I took was a few days after they activated my membership, and that was one of the best experiences I’ve had.”

That flight, from Atlanta’s DeKalb Peachtree Airport (PDK) to Palm Beach Airport (PBI) in Florida, was on a Bombardier Challenger 800 and was full of 15 or 16 other members.

“Once I got on the plane, there was seating assignments, there was someone on board handing out refreshments – mimosas, fruit baskets,” he said. “It was incredible, especially for it being free at the time.”

Among the other customers and backers JetSmarter could boast of at the time were Jay-Z, the Saudi royal family and Kim Kardashian, who touted the service on social media.

Already by 2017, though, according to reports, the shine was off, and JetSmarter began eliminating extravagances earlier customers took for granted. According to various complaints against the company, JetSmarter began reneging on what passengers paid for, like entire private jets for no upcharge, set rates around holidays, lavish meals and more — but continued to let its sales staff promise the moon.

Still, that year, Bayens saw elements of the original promise of the service come true, and he indeed ended up flying next to minor celebrities, such as reality-television personality Jonathan Cheban, often labeled Kardashian’s best friend.

“He talks a lot about food,” Bayens said. “All he would do is talk about food and show pictures of food.”

When, an hour before the flight, JetSmarter canceled a flight Bayens had planned to Teterboro Airport (TEB), in northern New Jersey near New York City, the company booked him on a first-class Delta flight instead.

“Just so I could get there,” he said. “I thought that was so cool.”

And to make sure all his friends thought so, too, JetSmarter offered a truly 21st-century perk: If you parked your car nearby and handed over your keys, someone would drive your vehicle right up the jet you’d just landed in and take an instantly social-media-worthy photo of you preening in front of both in true baller style.

“It was the deal of a lifetime, at the beginning," Bayens said. "But it just went downhill.”

At first, the changes seemed small and acceptable.

"They stopped the seating assignments, then they got rid of the refreshments on the plane,” he said. “When we got into the plane at first, right by the pilots was a drawer with alcohol and cups, and you could make your own drinks — that was pretty cool. They stopped doing that.”

It got worse. The complimentary food on the plane turned into plastic-wrapped supermarket platters that came with $100 charges tacked on. The Challenger 800s that could seat nearly 20 became Learjet 45s that could hold fewer than half that. Helicopter flights from the airport into the city were terminated, and so was the New York route. He even noticed that his gold membership card quickly became scratched up and shopworn, defaced much more easily than any other card he owned.

And those first-class rebookings on Delta? That changed, too — though Bayens doesn’t lay all the blame JetSmarter in that case.

“Customers were trying to manipulate the company,” Bayens said. “People figured it out after a while, and members started booking empty legs randomly to get first-class flights with Delta, and then calling Delta and saying they wanted a Delta gift card that they’d then use to fly somewhere else.”

JetSmarter realized members were exploiting that loophole and began tightening the conditions for the rebookings.

“I think JetSmarter failed because of the customers,” Bayens said of the manner in which passengers began to take advantage of the company whenever possible.

When JetSmarter asked him to renew his $15,000-a-year Smart membership in summer 2018, he turned them down. He’d flown with them 19 times, mostly to Florida, but also New York and the Bahamas, but the allure was gone, and he explored other companies like Delta Private Jets. Months later, when lawyers sent him a letter asking him if he wanted to join a class-action lawsuit against JetSmarter, he signed on.

That class-action suit is just about over, with $3,125,000 to be paid out to those of the over 12,000 eligible JetSmarter customers who joined in. Though the now defunct company’s epitaph is finally being written, it isn’t entirely complete — it’s still involved in several court cases.

Via email, a spokeswoman for XO declined to comment: “It is not appropriate for Vista Global or XO to comment on historical cases involving JetSmarter."

A representative for JetSmarter CEO Sergey Petrossov didn’t respond to a request for an interview by publication time.

Bayens said he’s happy to close that chapter of his travel life, though. He’ll get only $1,000 of his $15,001 payment to JetSmarter back, but he’s also to receive flight credits with the new company, XO — though it’s still not clear how many or whether they’ll be transferable. But once he burns through those, he’ll be OK leaving the private-jet world behind.

“I got some really cool photos, and somebody asked once if I was a pilot,” he said. “I’ll fly [the new company] if it’s free, but I’m not giving them any money. I’d rather fly Delta. I love flying commercial.”

Related stories
Save money with these travel-related offers on your credit cards this month
Use these shopping portal bonuses to earn extra miles this holiday season
Using miles and points to book airline tickets and hotels for others
Maui magnificence: A review of Kaanapali Alii, a Destination by Hyatt Residence
Featured image by (Photo courtesy of Brice Bayens)