Why does Washington's Reagan National Airport have a 'perimeter'? 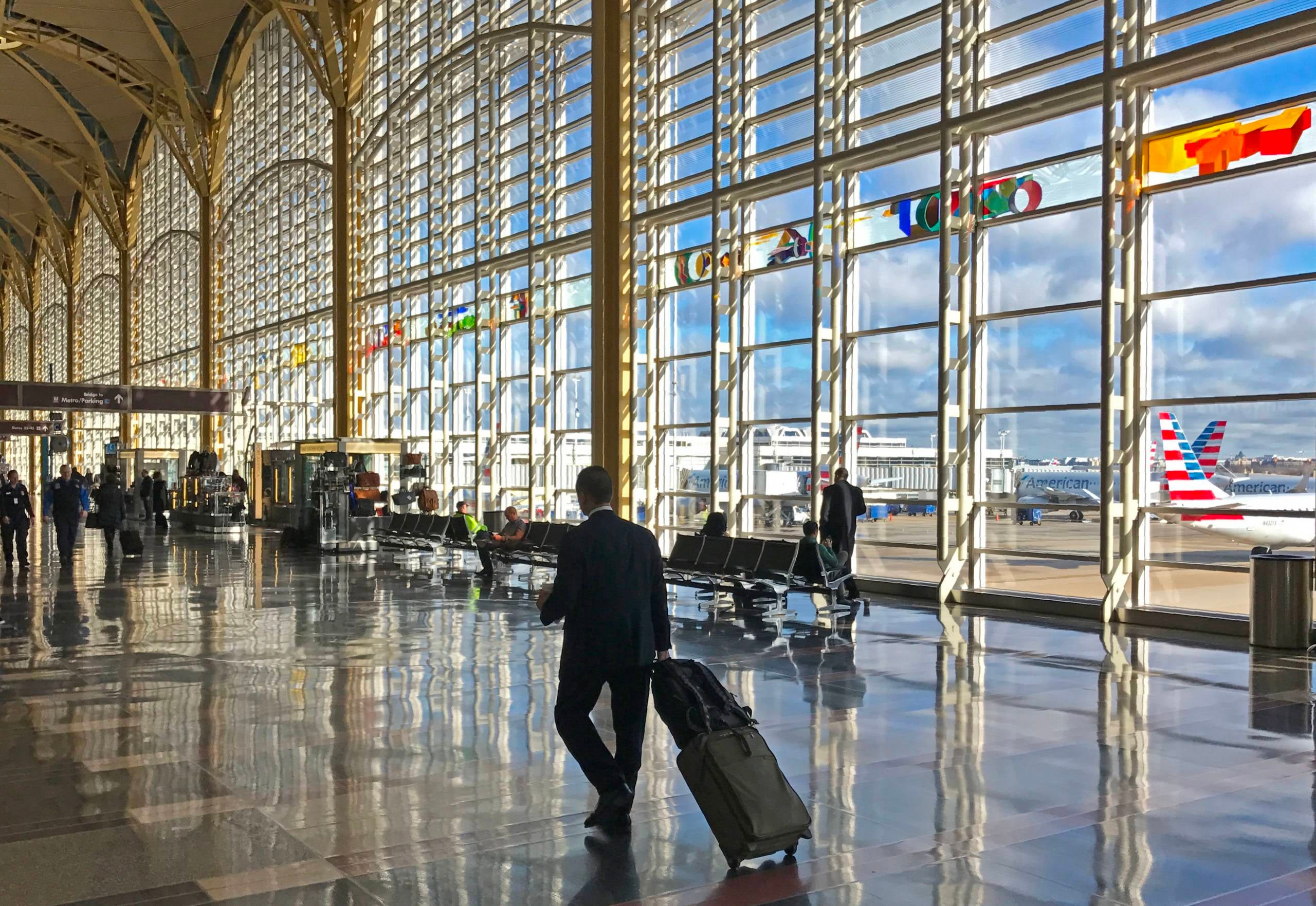 Why does Washington's Reagan National Airport have a 'perimeter'?
This post contains references to products from one or more of our advertisers. We may receive compensation when you click on links to those products. Terms apply to the offers listed on this page. For an explanation of our Advertising Policy, visit this page.

Scan the departure board at Ronald Reagan Washington National Airport any random Tuesday and you may notice something — very few of the airport's hundreds of flights are bound for cities west of Dallas or Minneapolis.

Washington National (DCA) has the distinction of being one of just two U.S. airfields, the other being New York LaGuardia (LGA), with a "perimeter," or restriction on how far an airline can fly nonstop from the airport. The limit has been in place for more than half a century with its roots in efforts to reduce congestion at the dawn of the jet age.

Flights from Washington National are limited to 1,250 miles. However, since 2000, federal authorities have granted airlines 40 "perimeter exemptions" — or 20 daily round-trip flights, since one exemption is good for either a takeoff or landing. Today, Alaska Airlines, American Airlines, Delta Air Lines, Frontier Airlines, JetBlue Airways, Southwest Airlines and United Airlines all hold exemptions for service to destinations further afield, including Los Angeles (LAX), Seattle (SEA) and even San Juan (SJU) in Puerto Rico.

Today, the perimeter continues as part of the two-airport system maintained by National operator the Metropolitan Washington Airports Authority (MWAA). The authority considers National a "regional" facility — with regional defined as the Eastern and Midwest U.S. — with its larger sibling Washington Dulles International Airport (IAD) the authority's growing, long-haul gateway.

The perimeter at Washington National, contrary to the popular narrative, was only partially to boost the then-relatively new Dulles airport when it was implemented in 1966.

The reason for the perimeter was to alleviate congestion at National after the introduction of jet aircraft that April. The airport was the exclusive domain of propeller-driven aircraft, like the Lockheed Constellation, until the U.S. Federal Aviation Administration allowed airlines to begin flying BAC 1-11s, Boeing 727s, Caravelles or Douglas DC-9s to National on April 24.

However, passenger numbers at National soared with the introduction of jets, which were mostly larger than the propeller aircraft they replaced, prompting calls for the FAA to address the congestion.

“Since [the FAA] opened National to smaller jetliners April 24, traffic there has mushroomed, taxing beyond capacity the terminal, its parking lots and the patience of its patrons," The Washington Post reported in June 1966, less than two months after the first jets landed at the field.

William McKee, administrator of the FAA in 1966, first proposed a strict 500-mile perimeter that July. But many airlines — and Congressional representatives — balked at the limit, saying it was too close to Washington. A compromise set the perimeter at 650 miles, with exemptions for flights to seven cities less than 1,000 miles from the nation's capital. That was implemented on Sept. 1, 1966.

Throughout the debate, the perimeter was acknowledged as a way to ensure National remained a short- or medium-haul airport with Dulles as the Washington region's main long-haul airport. However, the final rule that combined the first slot controls at National with the 650-mile perimeter was aimed primarily at reducing congestion at the close-in airport.

"The perimeter solution [was] proposed by ten of the thirteen airlines serving Washington National Airport as an effective way of solving the congestion problem," said McKee in a letter to Congress dated July 27, 1966 published in the Congressional Record.

It is worth noting that had the FAA, or Congress, wanted to promote Dulles they could have mandated airlines fly to the airport. At the time, all interstate air routes were regulated, giving the government the authority to force airlines to move flights to Dulles from National.

Instead, as McKee noted in a letter to then-Senator Peter Dominick from Colorado in May 1966, the perimeter simply ensured that all "international and long-haul domestic services" operated from Dulles and Baltimore's Friendship, now Baltimore/Washington (BWI), airports -- and not from National.

National's perimeter has been extended twice since 1966. It was moved to 1,000 miles in 1981, and to its current 1,250 miles in 1986. The last extension was driven by then-Speaker of the House representative Jim Wright, whose North Texas district was adjacent to American's headquarters at Dallas/Fort Worth International Airport (DFW) — an airport that, at 1,192 miles, was outside of the 1,000-mile limit.

Following the 1986 perimeter expansion, American added nonstop flights between Dallas/Fort Worth and Washington National to its map that December. The carrier is the largest at National today, with plans to fly larger jets with more seats from the airport beginning in 2021 when an under construction new concourse is due to open.

The perimeter at Washington National did not change again until after the new North Terminal, today known as "Terminal B/C," opened at the airport in 1997. The late Sen. John McCain, in a letter published in The Washington Post that September, called for a review of the limit that he argued stifled competition.

A post shared by Airport Architecture (@airportarchitecture) on Apr 11, 2019 at 6:49am PDT

"[The rule] comes at the expense of air travelers in the Washington area and throughout the country who deserve the opportunity to fly nonstop outside the artificial perimeter," wrote McCain. "Reforming barriers to competition will not increase noise nor compromise safety, and would result in lower fares to travelers using National.”

While McCain was unsuccessful in getting the perimeter removed, he did succeed in creating the first exemptions to the 1,250-mile limit. Former America West Airlines — based in McCain's homestate of Arizona — landed three of the six new exemptions for one flight to Las Vegas (PHX) and two to Phoenix (PHX). Frontier, and former National Airlines and Trans World Airlines took one each for new flights to Denver (DEN), Las Vegas and Los Angeles, respectively.

Another six exemptions were created in 2003, plus eight more in 2012, for the total of 20 that exist today.

The fate of Washington National's perimeter remains in the hands of Congress. As recently as December 2018, outgoing Virginia representative David Brat introduced legislation to remove the limit, calling it a "relic that belongs in the past."

Other recent efforts to change the perimeter have included extending it to 1,425 miles, or just far enough to allow for nonstop flights to Austin (AUS) and San Antonio (SAT).

"A key purpose of the statute establishing the 1,250-mile perimeter at Reagan National is assuring balance of D.C.'s two-airport system," MWAA spokesperson Christina Saull told TPG, citing the ability to grow at Dulles that does not exist at National. "[MWAA] is committed to maintaining the balance of the two-airport system and strongly opposes any changes to the Reagan National perimeter rule."

The future of the perimeter, despite the strong words of MWAA and the support of the Washington region's congressional delegation, will depend on what the shifting winds of Congress bring.

Related: Washington Dulles vs. Reagan National: Which airport should I use?

The current “beyond perimeter” destinations offered by airlines from DCA are:

The story has been updated to better reflect the role of Dulles in the implementation of the perimeter at Washington National.