A day in the life: What it's like to travel through an airport and on a plane as a wheelchair user 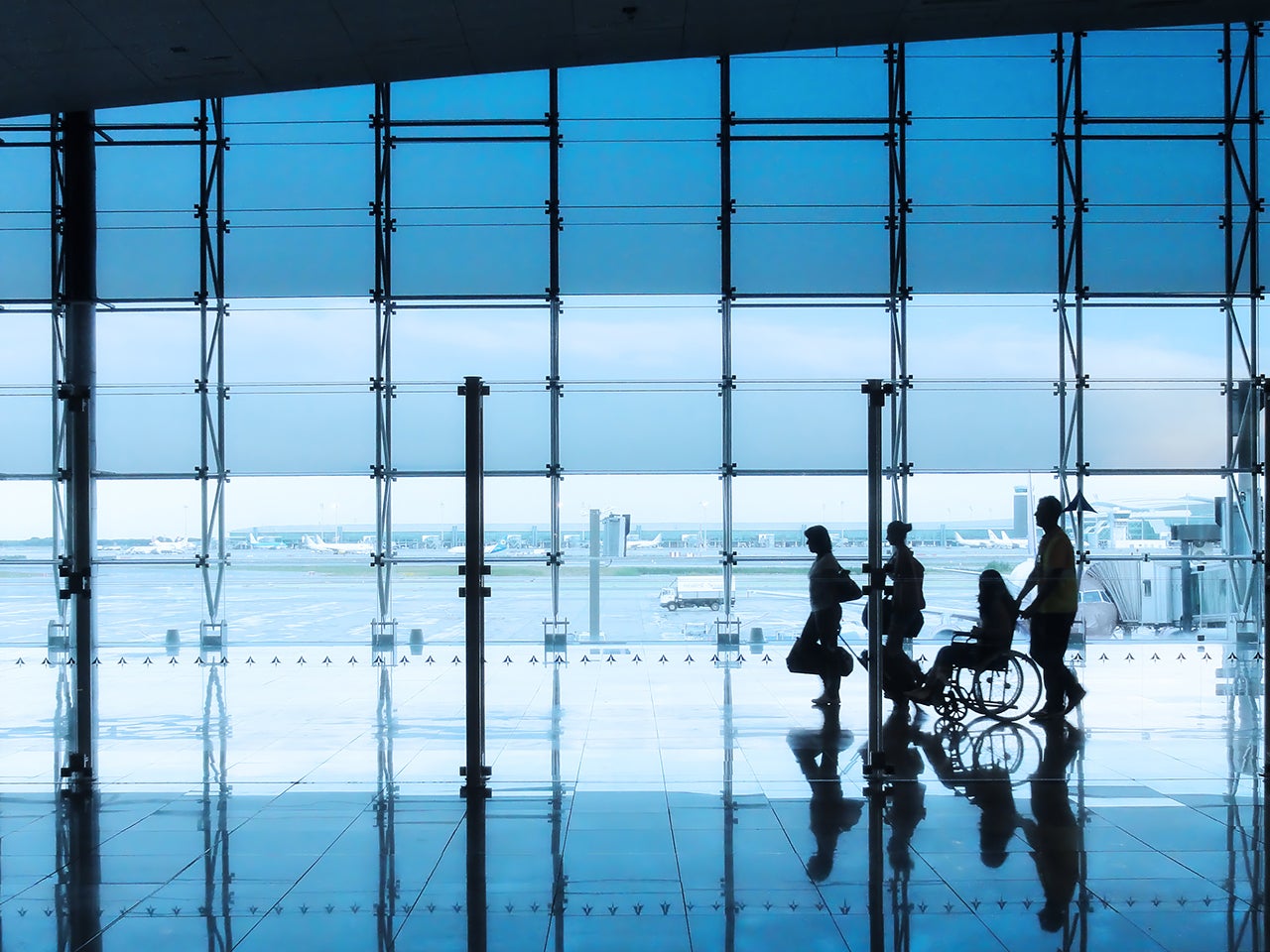 Gabrielle deFiebre was heading from New York to Phoenix on Delta flight 733 back in May when her wheelchair was damaged by employees in an incident recorded in a now-viral video.

As heartbreaking as it is to watch deFiebre, a quadriplegic, have to explain through tears, stranded on the jetbridge, that the chair that's just been broken "is her life," incidents like these are not uncommon: In 2019, airlines damaged more than 10,000 wheelchairs, according to the Washington Post. We're not talking about a damaged Away suitcase here — we're talking about an extension of someone's body. Not only does it happen frequently, but when it does, it often takes not days but weeks or months for the airlines to fix these chairs.

In the interest of putting the passenger experience of someone like deFiebre in perspective, we sat down with her to find out what the process is like from the start of her travel journey to the very end.

Related: These are the most wheelchair-accessible cities around the world

The same goes for hotels, which also need to be accessible — not just accessible in theory, but truly functional. A common frustration among those in wheelchairs is that often in "accessible bathrooms" the faucets are on the opposite side of the shower from the bench, making them, well, inaccessible. Even with these shortcomings, deFiebre says hotels are generally more accessible than Airbnbs.

In terms of booking flights, deFiebre says some airlines are better than others, and that she tends to fly the ones with "fewer horror stories" such as Delta, United and JetBlue. "Even before I get [to the airport], I book my flights online and say that I need assistance, so [the airlines] know I need the aisle chair. (Editor's note: Because airplanes are inaccessible to passengers in their own wheelchair, chair users must be transferred and then strapped into a much smaller aisle chair provided by the airline that's designed specifically to fit down the narrow aisle of the airplane). Then I call to make sure everything went through online. If I’m traveling with someone, I request for the person to sit next to me and additional legroom because it helps with the transfer to the chair."

deFiebre says she books the window seat so people don't have to climb over her.

Her preferred method of getting to the airport is an accessible Uber or Lyft. "Public transportation is quite a journey, especially pushing a suitcase and with elevators being out of service," says deFiebre.

Once she gets to the airport she does "the normal stuff." deFiebre's home airport is LaGuardia and says that all airports are similar in terms of accessibility thanks to standardized ADA regulations.

For getting through security, deFiebre swears by TSA PreCheck even when there's a line designated for those with a disability. deFiebe explains that if a wheelchair user doesn’t have PreCheck, they can’t go through the metal detectors — they have to go through the full-body pat-down instead. Having PreCheck means a quicker, less invasive experience.

"When I get [to the disability line, I] always have to wait. The average person puts their bag on the belt to get scanned and you go through the metal detector. I have to wait until they call for a female assist and wait for someone to come and do the pat-down. If they’re really busy it takes even longer. My stuff is either waiting [on the belt] or an agent will grab it and put it aside."

Usually, there's not enough time to hit the lounge since she boards first. She gets to the gate more than 30 minutes ahead of time.

"When I get to the gate I double-check that [the airline has] the aisle chair. They give me a tag for my wheelchair, and I usually also ask to speak to the person putting the chair onto the plane. It helps to have the person put a face to the chair. I explain how to lift the chair, and remind them to be careful — this is my entire life. Sometimes they are rushing and I can’t have this conversation," which deFiebre notes was the case on her trip to Phoenix.

It should also be noted that often the employees handling these wheelchairs are not airline employees, they are contracted out by the airline.

deFiebre says she does her best to give the handlers as much information as she can. "I put two signs on my chair: One has a photo of the chair and one sign says where to lift the chair." This is important because deFiebre's chair can't be picked up by the wheels — it must be picked up by the side. She also takes off all removable parts.

Related: Planning an accessible trip? These travel resources can help.

"I'm the first one to board. I ask for two people to lift me to the aisle chair and strap me in. It’s almost straight jacket-esque," says deFiebre. "You have to hope [the handlers] know what they’re doing. I’ve had to instruct them on how to strap me in properly."

All the while, deFiebre is hoping they don’t let everyone else onto the jetbridge until she's settled in her seat. "It's stressful having 50 people standing there watching you do something that’s personal."

"Then I hope the chair ends up on the plane and in the cargo hold," says deFierbre, whose chair she says has been left on the jetbridge in the past.

"It’s an ordeal to be pulled down the aisle and transferred to an airplane seat," says deFiebre.

When asked if sitting in first class is an option, deFiebre told me it would definitely be easier because it’s more spacious, but is too cost-prohibitive.

A common passenger complaint during the pandemic has been the lack of food and beverage service on aircraft. But for many wheelchair users, enjoying a drink or a snack on the plane is not an option.

"I don’t eat very much or drink because I can’t access the bathroom on the plane," says deFiebre. "I obviously can’t drink [alcohol]. I don't want to risk having to use the bathroom."

On longer flights, there are aisle chairs that can be used to access the bathroom, but the passenger needs to be able to transfer themselves into the chair (and onto the toilet). On shorter flights, deFiebre just assumes she will not be able to use the bathroom and plans accordingly. "I literally have to dehydrate myself to get through an airplane ride. It’s been years since I’ve seen the inside of an airplane bathroom,” she says.

When the plane lands, deFiebre has to wait for everyone to get off first.

"I’m nervous waiting for the chair to arrive. I've seen them unloading it, and have seen it fall off the conveyor belt," says deFiebre. "Sometimes they try to get me to get off before my chair is unloaded, which I won’t do because the aisle chair is incredibly tiny and I’m restricted by all the straps."

Once the chair has been unloaded and is on the jetbridge, the inspection process begins. "I look over the chair to make sure it’s ok, then reassemble it and test it to make sure everything is working," says deFiebre.

Because of the time this process takes, deFiebre purposely does not book connecting flights. She pays extra for nonstop flights.

Related: What does accessible travel mean to you?

Once inside the airport, deFiebre says the search is on for a wheelchair-accessible bathroom, which is typically easy to find but often occupied.

“Flying is stressful for everyone. [As a wheelchair user] it’s a stressful experience from start to finish to an extreme. It takes a lot more planning and preparation. I’m trying to make sure my chair is ok and I’m worried about it until I get where I’m going," says deFiebre.

Organizations like All Wheels Up are working to make travel a little less stressful for passengers like deFiebre by advocating for wheelchair users to be able to stay in their own chairs during flight. For more information about their work, visit their website.