We Sent a Brewer to Disneyland's New Brewery. Here's What He Loved and What He Hated 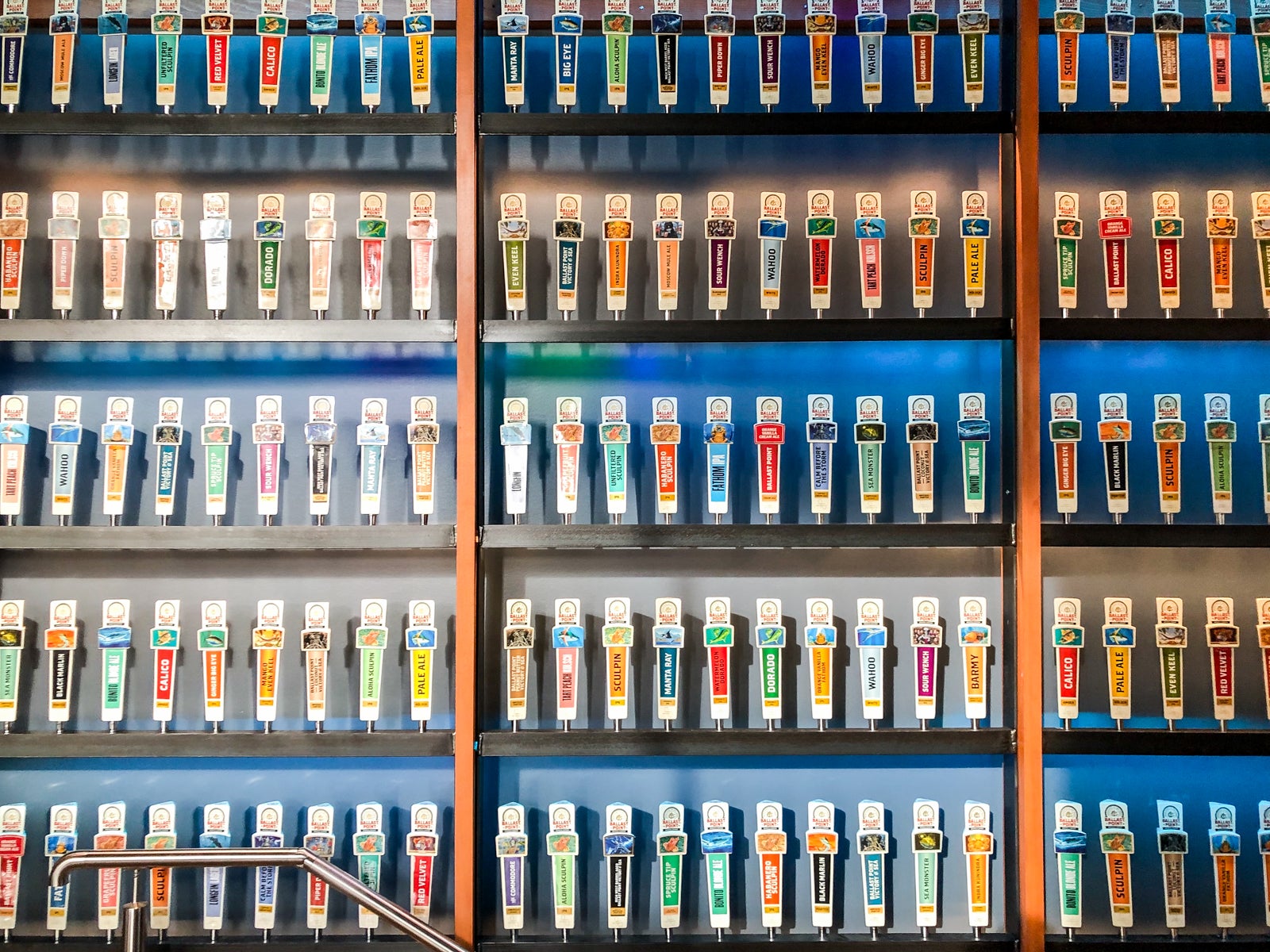 We Sent a Brewer to Disneyland's New Brewery. Here's What He Loved and What He Hated
This post contains references to products from one or more of our advertisers. We may receive compensation when you click on links to those products. Terms apply to the offers listed on this page. For an explanation of our Advertising Policy, visit this page.

Puffy pink ears, polka dot ears and even ears painted in flames. Wherever you turn at Disneyland, you find those iconic mouse ears.

Everyone here is drunk on the ears.

Luckily, Disneyland now has something else to imbibe: beer. Many beers, in fact, at the theme park's first brewery.

In the Magic Kingdom, where big people act like little kids, it’s a relief to take time for a grown-up pleasure — or two or three or 40, which is how many different beers were on offer on a recent afternoon at the new Ballast Point Brewery in Anaheim, California’s Downtown Disney.

TPG, of course, decided that we needed to check it out, and who better to join us than Brett Lawrence, the lanky, opinionated owner of nearby Towne Park Brewery?

We strolled into Downtown Disney through a metal detector fronted by a sign prohibiting alcohol and costumes on guests 14 and older — mouse ears notwithstanding. Awaiting were more beers than there have been Disney Marvel movies. Ten hoppy ales, seven “rich and malty”; five each “crisp and bright,” “tart and sour,” and R&D special batches; eight barrel-aged boozers — with that much selection, a guy could get as confused as he would browsing gift shops brimming with ears. Lawrence wasn’t having it.

“That’s a lot of damned beers. I don’t know what to pick. I feel overwhelmed, man.”

Housed upstairs in an Art Deco-style building just past the fire-breathing Lego dragon, this branch of Ballast Point represents the evolution of what was once a local, independent brewery. So says the timeline in the stairwell. From its inception in 1992, the highlights of Ballast Point’s growth gallop through the 2005 birth of its flagship Sculpin IPA to a World Beer Cup win and its first brewpub launch, until the blockbuster year of 2015, when, read the blurb: “We proudly join the Constellations Brand family.” (Constellations Brand is the mega-producer of Corona.)

They were busy. With 120 seats inside and 112 on the balcony, there wasn’t an empty chair.

“If they’re gonna come in and do this, you know what, I could take 10 percent of their crowd to come to my brewery afterwards,” Lawrence said.

(Lawrence sells his beer at Disney venues too, and is the only local, independent brewer in the joint. Light-soaked, spare, and airy, Towne Parke is a Zen place to enjoy a toasty amber ale or spicy Rye IPA. Disney, by comparison, was dizzying.)

We circled seemingly as long as we had in the Disneyland parking lot until barstools came free. The cavernous room fit the brewery’s name; it looked like a ship’s hold, with wooden ribbing approaching a sky-high ceiling. A penciled mural depicted an angler fish, a giant octopus, a deep-sea diver. Behind a wall was the gift shop. I wondered if there were beer-themed ears among the merch.

“You know what Ballast Point does really well? Staff training. I go to a lot of their facilities. Their staff is so knowledgeable, even if their beer tasted like sh*t, they’d sell you on it,” Lawrence said, dismissing the unwieldy menu. He addressed the ponytailed bartender. “Boss man, you surprise us. We'll take whatever you’re pouring, light to dark. Throw some sours in there. Fill ’er up.”

The flights we had were enough to give us a taste of the Disney magic, to suss out the wicked stepmothers in the group and to agree on which brews need just a sprinkling of pixie dust.

We started somewhere in the middle. You might call the Ballast Point Lager the classic black mouse ears of beer. Plain and simple, it’s low-alcohol (4.3% ABV), low-cal, and gluten-reduced, a quaff that costs your gut nothing and offers your palate little.

“You know, I like it,” Lawrence said. “But No. 1, this lager doesn’t come out cold enough. It’s been sitting here three minutes and it’s warm.” Lawrence murmured, “Cold cold cold cold cold,” like an incantation would magically chill the beers. “That’s a management issue. If this were summertime, these would all taste [bad].”

It didn’t help that the single-hop Simco Session IPA arrived in a glass hot from the dishwasher. The kitchen couldn’t keep up.

“You’re a dad, and you come to Disneyland, what’re you gonna do? Have some beers,” Lawrence said.

Apparently that applied to moms and folks without children, too.   But despite the crowds, the place was comfortable, the noise well-managed, and I loved that the 4-ounce flights came in full-sized tulip glasses that funneled the evergreen aroma of the Spruce Tip Sculpin IPA right into our noses. That beer had verve. The Grapefruit Sculpin, on the other hand, lacked zest.

“People say Sculpin dropped off once Ballast sold,” said Lawrence. He seemed to agree. “Everyone cuts corners in corporate. They look at it from behind a desk. They don’t look at it like we do in the trenches.”

The sours, too, tasted tamped down. Despite having won a Great American Beer Festival silver medal, the Blackberry Sour Wench tasted neither sour nor berrylike.

And the Grapefruit Gose sagged.

But you could be a beer geek from a family in Wisconsin. Luckily for that customer, there’s Ballast Point’s Victory at Sea, a thick, rich imperial stout brewed with coffee and vanilla.

It was so tasty it led us away from everything else into a high-ABV fantasia where barrel-aged Heffalumps like the High West Victory at Sea Barrel-Aged lurked.

“It has that punch. It’s like I got some whiskey on my palate,” said Lawrence, in the thrall of this bruiser aged in barrels from a formerly independent distillery in Utah. “Yeah, High West sold for $160 million,” he added, taking another sip.

And so it went. Rum and Rye Sea Monster Imperial Stout, with its coconutty claws; Peanut Butter Victory at Sea; even the quaffable R&D Saloon Lager, a cake-spice, bourbon-barrel blonde that Lawrence deemed “delicious” — at the end of the day, as he would say, there was a lot here to please critical drinkers like us.

And which of the Disneyland brewery's could've used just a smidge of pixie dust? The Ballast Point Lager and Simco Session IPA.

All the rest of Ballast Point’s beers — the easier versions of full-throttle styles like sour and IPA — seemed right for a place that needs to appeal to a broad section of the beer-loving public who are imbibing while wearing rodent ears.

“There’s nothing like drinking beer and having fun, so when did it become a snotty, uptight business?” Lawrence said. “Pinkies down. Drink beer.”

RELATED VIDEO:
Are We There Yet? | The Ultimate Travel Stroller