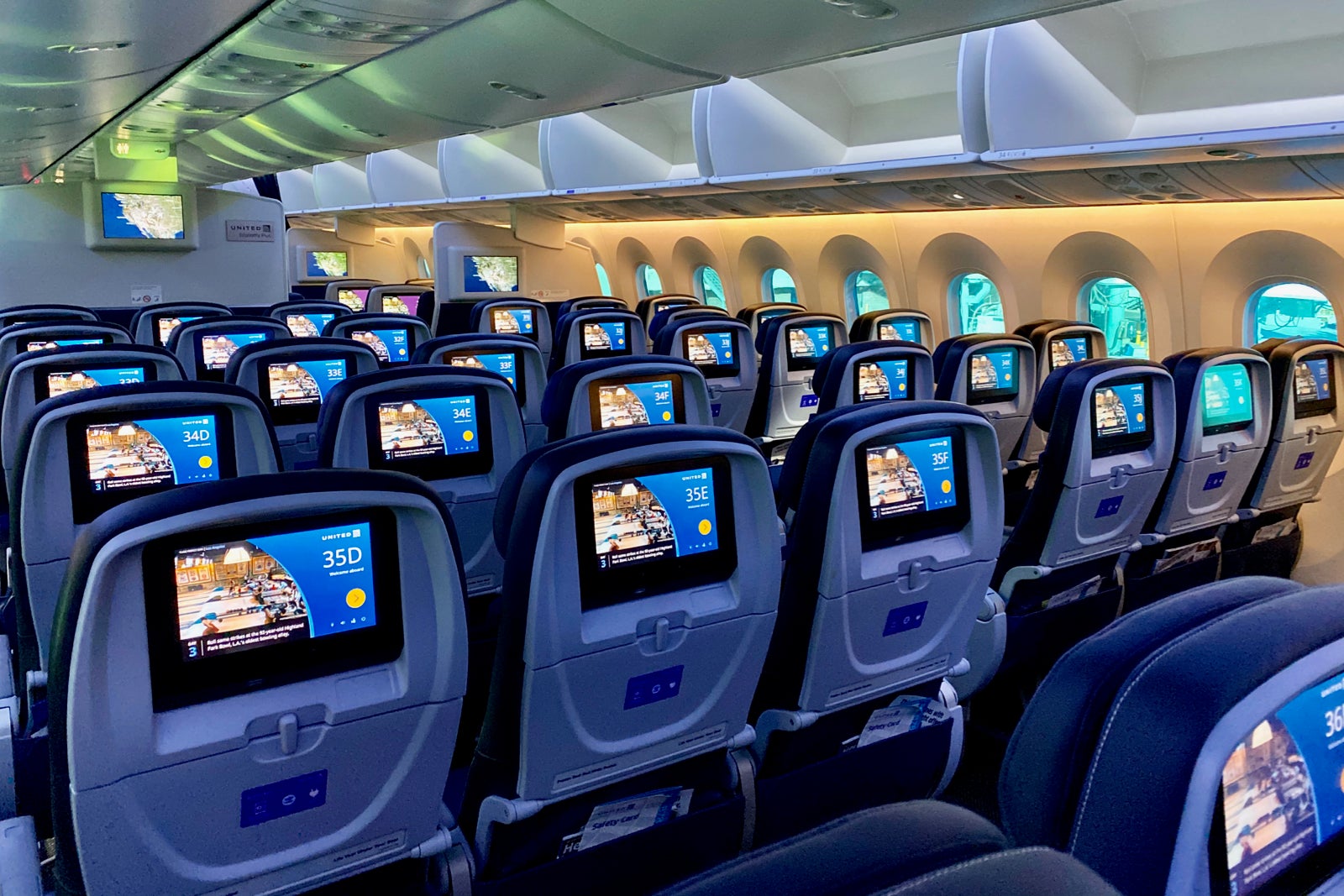 Launched in 2016, United’s Polaris business class is one of the carrier’s largest cabin reconfiguration projects to date.

Four years later, the project is hardly complete, though United’s been making some significant progress. At the current pace, the airline is, on average, introducing one plane with these cabins every ten days. New planes delivered to UA are getting factory-fresh installations, and all existing wide-bodies are going through the retrofit program.

Not only is biz getting a redesign, but the airline has also introduced a premium economy cabin called Premium Plus. Furthermore, United’s giving coach a small update as well.

The latest aircraft to sport the snazzy new cabins is the Boeing 787-8. Of the three Dreamliner variants, the -8 is the smallest and operates many of the carrier’s leisure-focused international flights, like San Francisco - Tahiti. This is also the first of the carrier’s Dreamliners to go through the retrofit, as the brand-new -10s had the cabin installed at the factory.

We’ve been tracking the first plane to get the retrofit — N27908 — since its return to service on Jan. 8. I've been eager to get a look inside, and I had the opportunity to do just that on a short domestic flight from Denver to San Francisco. Read on for my initial impressions.

If you’ve flown in Polaris before, you’ll be instantly greeted by familiar seats and color palette. At first look, it’d be easy to confuse this cabin with that of the larger Boeing 777s.

The 28 seats are arranged in a standard 1-2-1 configuration, each with direct aisle access.

Unfortunately, this isn't all good news. United’s taken away eight biz seats from these planes, making PlusPoints and mileage upgrades even harder than they already are.

There are actually two Polaris cabins on this "baby" Dreamliner. The larger cabin has five rows spread between doors 1 and 2.

And then, there’s a unique two-row mini-cabin behind door 2 and just before Premium Plus. This is definitely the most private Polaris cabin in the United fleet, and I’d highly recommend sitting in rows 6 or 7.

Unlike the forward biz cabin, passengers will pass by your seats when boarding. But once the boarding door is closed, the privacy offered here is unrivaled.

Window seats alternate between being closer to the aisle and closer to the window. Seats flush with the window are definitely my top pick. In the forward cabin, that's rows 1, 3 and 5, and in the mini-cabin, it's row 6.

However, be mindful that row 5 has a misaligned window that might impede wing-view shots.

Likewise, the center seats alternate between being right next to each other and being next to the aisle.

I consider seats 6A and 6L to be two of the very best Polaris seats throughout the fleet. Thanks to the private mini-cabin and oversized footwells, you’re bound to have a great flight if seated there.

Row 1 also has enlarged footwells, but it's much closer to the restrooms.

Like all Polaris seats, these do not have doors, though there’s a divider at the edge of each seat to shield you from the aisle.

And if you’re flying solo in one of the middle seats, there’s also a partition that can be raised once airborne to add some separation from your neighbors.

Other than the mini-cabin, there are no real surprises in this iteration of Polaris. Each seat measures 21 inches wide, and occupies about 40 inches from the edge of the seat to the aisle. Though biz seats on the flagship Boeing 777-300ER measure 22 inches wide, the seat felt considerably narrower on the Dreamliner.

The tray table also felt smaller compared to the 777. It measured 18 inches wide and 15 inches long, though it fit my 13-inch MacBook Pro without issue.

The other noticeable difference is the shorter bed length. On the 777, you’ve got about 75 inches when sleeping, but there are only 71 inches on the 787-8. This could definitely be an issue for someone like Brian Kelly.

There are two standard-sized bathrooms dedicated to the Polaris cabin, both in front of Row 1.

The premium economy cabin on this aircraft is very similar to what you'll find on United’s other long-haul aircraft.

There are 21 seats spread across three rows in a 2-3-2 configuration.

They feature additional recline compared to economy, as well as a leg- and footrest.

In terms of amenities, there are a 13-inch IFE monitor, AC outlet and USB port.

Though I haven’t flown Premium Plus on the 787-8, my experience on the 787-10 was underwhelming. For now, the only good news about this cabin is that you can choose a seat there for the same price as an Economy Plus seat.

This is an especially good deal for Premier Gold elites and higher, since they get free extra legroom seating at time of booking. For the time being, this aircraft is only getting assigned to routes a few days before departure, so monitor the seat-map if you've got an upcoming 787-8 flight.

There aren’t many changes to the economy cabin on the retrofitted 787-8.

The seats themselves are practically the same as the previous generation. They’re arranged in a 3-3-3 configuration and offer about 17 inches of width.

Be sure to avoid Row 49, as it's missing windows.

The only noticeable difference was the new 9-inch IFE monitors updated with the latest software.

United designates the front four rows of the cabin, including the bulkheads and exit rows, as Economy Plus. Other than offering about four more inches of pitch, these seats are no different from the rest of coach.

Generally, the retrofitted 787-8 represents a massive upgrade for fliers.

Nowhere are the changes more noticeable than in biz. The Polaris cabin goes from a dated 2-2-2 configuration to one with direct aisle access from every seat. Though the seats are narrower than those on the flagship Boeing 777-300ER, they’re still quite comfortable.

With the reconfiguration, United introduced a Premium Plus cabin on this aircraft. It's an intermediate offering between coach and biz, though the service in this class still needs work.

And finally, not much has changed in coach, except for a more robust IFE system.

So, what’s the catch? The eight missing biz seats. Because of this downsizing of the Polaris cabin, scoring an upgrade or finding an award seat on this upgraded plane will only become harder. But if it happens, you'll enjoy United's top-notch offering.

For more on United's 787 Dreamliners, see: