Articles
Darren Murph holds a Guinness World Record as the planet's most prolific professional blogger. He's an explorer at heart, having traversed nearly 50 countries and all 50 US states. He's flown over one million miles on Delta alone, and serves as a senior writer at TPG.
Follow
Feb. 13, 2019
•
7 min read 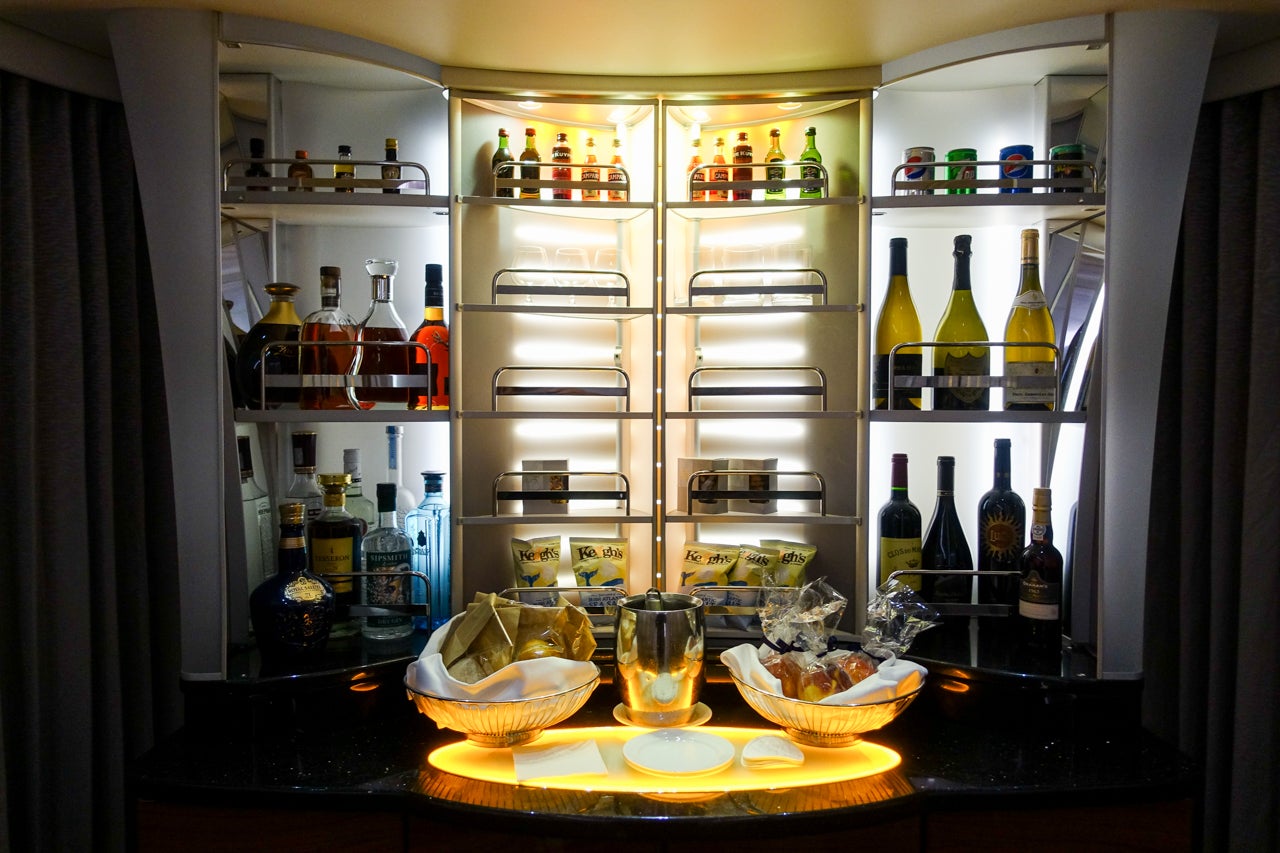 Imagine this: you're sitting in a direct-aisle-access, first-class seat with a lovely view over Chicago. You've got legroom for days. There's fast Wi-Fi, and the plane is so fancy your roll-aboard is stashed in a closet rather than an overhead bin. Flight attendants are bending over backward to bring you snacks and drinks, but you're more interested in serving yourself at the walk-up bar.

The newest in transcontinental premium? Not quite. It's actually what you will see soon from Arkansas to O'Hare. United recently introduced one of the stranger aircraft we've seen: an over-the-top premium regional jet that seats just 50 passengers, with a full 20% of the cabin devoted to first class and another 40% to Economy Plus. The CRJ550, based on the existing Bombardier CRJ700, will be used on premium regional routes of up to 900 miles, replacing current 50-seat aircraft such as the Embraer 145.

So far, United confirmed only that this blinged-out regional jet will fly between Chicago (ORD) and Walmart’s headquarters in Bentonville, Arkansas (XNA). More flights out of O'Hare will follow this summer, with sightings in Newark (EWR) not far behind. But here's the $64,000 question: Why?

To really understand why United is serving up a regional aircraft with top-tier amenities, you need to understand a bit of legalese. The scope clause in United's contract with the Air Line Pilots Association (ALPA) limits it to "255 large regional aircraft." Those are aircraft with up to 76 seats. Per its latest fleet plan, United is up against that 255 figure, which puts it in a real bind. With an inability to add more 76-seaters, the options are somewhat limited when it comes to competing with Delta and American Airlines. It can add larger mainline jets, where it would need to pay pilots 2x-3x than the going rate for regional operators flying for United (like GoJet), or it can add more 50-seaters.

While the airline hopes to renegotiate with pilots and push that 255 cap higher, it has decided to take a plane designed for 76 passengers (the CRJ700) and creatively put it into service with just 50 seats as a workaround.

United is marketing the CRJ550 as a premium product, but industry analysts I spoke with agree that this is merely a short-term play to become attractive to business travelers with a two-class product in regions that are already enjoying two-class comforts from Delta and American.

When I asked Brett Snyder, president of Cranky Flier, whether he thought Delta or American would follow suit with fancified 50-seaters of their own, he was unambiguous: "I don't expect that American or Delta would follow this move anytime soon. They have enough more efficient aircraft in the regional fleet to serve the markets where they want a premium cabin. The only reason [for] American or Delta [to follow suit] is if the 50-seaters all age out of the fleet and they can't find anything else to replace them. But that's not an immediate issue."

He also said that he would expect United to quickly change course and put more seats into these CRJ550s (essentially converting them back to CRJ700s) if a new scope clause allows for more large regional jets. "United doesn't want to fly these planes with only 50 seats," said Snyder. "It just has no other choice as of now. If that changes, I can't imagine United opting not to put more seats back on."

Helane Becker, managing director and senior research analyst at Cowen, flatly told me that the CRJ550 would not exist if not for United's current scope clause. "American has room for 320 regional jets, while Delta has room for 325," she said. "United's cap of 255 puts it at a disadvantage in the peer group." While Delta is adding 90 A220s with 109 seats each, it's also willing to pay a starting rate for first-year first officers of $92 per hour. Meanwhile, the starting rate for regional operator SkyWest is $45 per hour, while GoJet is $37 per hour. United's pilots have thus far responded to contract negotiations by saying that they'd happily fly 76 seat regional jets, but only if they are allowed to fly them (as opposed to lower-paid regional pilots).

Becker also reiterated that United seems bent on not adding further complexity into its aircraft mix. "United already has a complex fleet," she said. "The more complexity you add with respect to catering, gates, maintenance, etc., the greater the likelihood you won't get your planes out on time."

Hunter Keay, managing director, airlines and A&D at Wolfe Research, pointed out that United "thinks more premium revenue will cover the incremental CASMx headwinds from fewer seats on the planes." That's a bit of jargon referring to "cost per available seat-mile." In other words: With fewer seats on the same plane, costs go up, but because those seats are bigger and better and sold for higher fares, the airline rakes in more money. However, the introduction of the CRJ550 indicates that the airline "doesn't expect scope clause change anytime soon," Keay said.

What It Means for You

If you're a United loyalist based in a market that drives premium connecting revenue through Chicago (ORD) and Newark (EWR), this is excellent news. You'll soon see single-class regional jets replaced with CRJ550s, offering by far the most elegant experience to date in a 50-seater. It'll make things far more pleasant for you when connecting to United's larger hubs for onward travel. Unfortunately, the CRJ550 will be a rare sight outside of Chicago (ORD), Newark (EWR) and perhaps Houston (IAH). Given that the CRJ550 has a 900-mile restriction, you won't be able to fly this bird on longer routes.

If you're a Delta or American flyer, this won't have any significant impact on you unless it's enough to make you reconsider your loyalty. The CRJ550 is United's attempt to catch up with two-class aircraft from AA and Delta, which it views as superior. The CRJ550 coming to town may have a small impact on how Delta and AA price their tickets, but it's not apt to trigger substantial change.

Overall, it is encouraging to see airlines appreciating demand for premium seats in regional flying. After years of racing to the bottom in the space, Delta has introduced the widest economy seats in its entire fleet on the A220 and United is repurposing CRJ700s to provide more luxurious flights to just 50 passengers. We hope that these are signs of even more positive change ahead for the passenger experience.