Flight of a lifetime: United sends some very deserving children to the North Pole

Articles
Edward Pizzarello covers family travel for TPG Family and also blogs at Pizza in Motion. You can find him hosting the Miles to Go podcast and eating doughnuts on Twitter and Instagram.
Follow
Dec. 08, 2019
•
10 min read 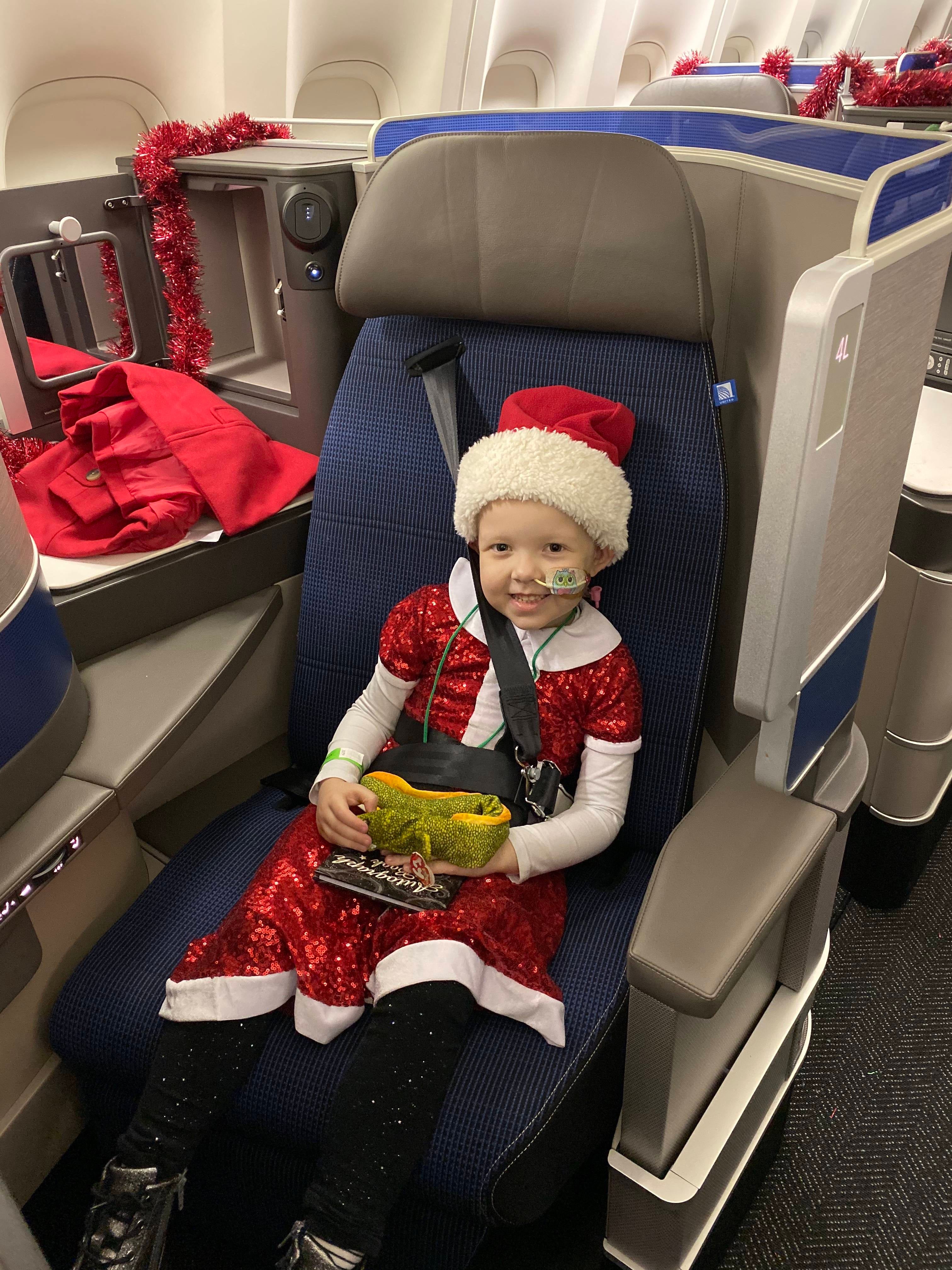 Flight of a lifetime: United sends some very deserving children to the North Pole
This post contains references to products from one or more of our advertisers. We may receive compensation when you click on links to those products. Terms apply to the offers listed on this page. For an explanation of our Advertising Policy, visit this page.

Check-in was bright and early for the most festive United Airlines flight of the year. But you couldn’t buy a ticket or cash in miles to grab a seat, no matter what level of status you had with the airline.

On Saturday, over 100 children and their families who are part of the Children's Hospice International network showed up at Washington-Dulles Airport (IAD) for one of the program's annual Fantasy Flights. But you won't find this flight on the departure boards: These special girls and boys were about to embark on the trip of a lifetime on flight Snowflake 1 to visit the North Pole (official airport code: NTP).

The families arrived just before the sun poked up over the horizon on a chilly morning and were greeted by carolers, bubbles and plenty of holiday cheer. United Airlines employees were decked out in huge smiles and festive gear. Even the security lines and “moon buggy” mobile lounges at Dulles got a holiday theme for the occasion.

At the gate prior to departure, there were snacks and drinks along with activities such as face painting.

The festive gate agents soon began the boarding announcements for this very special flight. A group of volunteer flight attendants, of course decked out in their own holiday cheer (and singing carols), jumped into action when boarding started.

Each family was assigned one of these special attendants to escort them down the jet bridge and to their seat. On board, families were greeted by flight attendants blowing bubbles and singing songs. While everyone I encountered was in a festive mood, the folks on board had a whole new level of cheer.

A 777-200 normally bound for Munich on an overnight flight drew the lucky straw for what can only be described as the best diversion ever. The pilot, Mel Mason Jr., was operating his seventh Fantasy Flight on behalf of United Airlines, while co-pilot Anne Worster was volunteering for her first mission to NTP. Mel’s missions operating Snowflake 1 have included piloting a 757, 767 and 777 on the long voyage.

When you see something as detailed and as dedicated as the team of hundreds of volunteers putting together this fantastical voyage, it’s easy to wonder how it all started. This was the 30th anniversary of United Airlines' Fantasy Flights.

While these flights take place at many United stations across the world nowadays, the “voyages” started at Washington-Dulles Airport. The brainchild was Don Swanzy, a now-retired United Airlines employee who started out as a shift manager at the Dulles control station.

Swanzy reached out to Children’s Hospice International (CHI), which has a long history of making sure children and their families dealing with life-threatening illnesses have access to hospice and palliative care services. As founder Ann Armstrong-Dailey told me, CHI didn’t actually believe the airline was serious at first. When the team realized the airline was committed to the effort, a magical partnership was born.

Swanzy and Kirk Douglas, another long-time organizer of the event, shared with me their memories of the first flight, which took place on a DC-10. Because of the fragile condition of some children, they didn’t quite have the full flight you might expect. The pilot hit the engines hard for a high-speed taxi, lifted the wheels and ultimately landed again a few seconds later. It was just that quick to get to Santa’s workshop!

Swanzy, who was on hand for the 30th anniversary flight, discreetly handing out pictures of the children with Santa Claus to each family as they departed, said that one of the driving principles from the very beginning was to bring the siblings of these special children along and to treat them just as special as all the others. He said that so often in families with a child suffering a life-threatening illness, the attention can wander away from the healthy sibling. For one day, he wanted to make sure all the kids were treated equally.

Heading to the North Pole

Fast forward to today, and I boarded with Amelie, a little girl who’s just about to turn 5 years old. Her mom, Katya, serves in the military in the local DC area. They made the trek to Dulles, and this was the first time since Amelie was 1 year old that she would be on a plane.

With her stuffed snake close at hand and decked out in the sparkles of a Santa dress befitting her huge smile, she buckled in, excited to make the voyage.

Amelie was diagnosed with Leukemia at a young age. While I’m sure she has tough days, she looked like any other excited kid while she got buckled in for Snowflake 1. To Amelie, this voyage wasn’t about her first time flying in the brand new United Polaris business class seat —she really couldn’t care less. This was all about Santa.

The crew of volunteers definitely made this the most festive 777 I've ever seen. The decorations touched virtually every seat on the plane. The Grinch would have needed a bigger sleigh to steal all the holiday cheer.

Our pilot Mel came on the PA system to inform us of the special rocket fuel technology only used on these flights to the North Pole. Even I was surprised by our take off. It was the airline equivalent of burning rubber, with our massive 777-200 using only about 3,000 feet of runway for a take-off roll that was probably half the time you’d normally expect.

The cabin crew jumped into action as soon as we were airborne, handing out snacks and drinks to the 200 or so folks on board.

The purser asked everyone to shut their window shades as part of their special agreement with Santa to disguise the location of The North Pole; we could hear the jingle bells of Santa’s sleigh at one point, we were so close.

Then, the purser announced she was going to run up and down both aisles to high five as many of the participants as possible. A 777 is a pretty long plane, but she managed to make the entire loop and I’m not sure she missed any child on board.

Our pilot and co-pilot brought us to a safe landing at the North Pole and we taxied to Santa’s Workshop (also known as Gate D29 on the other 364 days of the year). The faces of the stunned children as they entered Santa’s Workshop were equally matched by the adults. The activities stretched on as far as the eye could see. Local military, law enforcement and fire departments were there handing stuffed animals to kids, giving them “North Pole Night Vision” lessons and feeding them lunch. Face painting, music, as well as arts and crafts filled the space.

Amidst the hustle and bustle, I was introduced to Omar Idris, managing director of the Washington-Dulles hub for United Airlines. Idsir reflected on the hundreds of United employees who volunteered their time. With an effort as incredible as United was executing, it might have been easy for Idsir to take a victory lap. Instead, he deferred to Swanzy and all of the volunteers. He also introduced me to Armstrong-Dailey. Again deflecting attention from himself or United, he confidently boasted that if Armstrong-Dailey's team hadn’t returned that phone call 30 years ago, United’s efforts wouldn’t have blossomed into what they did.

Meanwhile, Miss Virginia took time to make a very special crown for our princess, Amelie, in the Santa dress.

After that, it was time to hit the moon bounce — and then meet Santa!

Comfortably on Santa’s knee, the two whispered, likely conspiring on the list of things he might bring her for Christmas. As it turned out, she didn’t have to wait long for some of her gifts, as a large bag of toys appeared out of nowhere. Santa went through the bag with a wide-eyed Amelie.

You might think an early morning flight and all these festivities would tire out a child. But, Amelie decided she had at least one more burst of energy as the festivities wound down. An apparent fan of princesses, her dancing shoes had enough energy for one final performance before the day was done.

For all intents and purposes, Amelie and so many other kids got to live a “normal” day while participating in an incredible journey. That’s kind of the point of these flights, to give these children and their families the opportunity to visit Santa and, for just a few moments, not focus on whatever battle they might have against an illness.

For this brief moment in time, thanks to so many volunteers and donations, these families had an experience they will likely never forget.

You can donate to Children’s Hospice International to help support their mission, including these Fantasy Flights, here.

The Points Guy was invited by United Airlines to attend the Washington-Dulles Fantasy Flight event.