Articles
Zach Griff is a senior reporter at TPG. He writes travel and product reviews, deep dives into loyalty programs, news about the airline industry and more.
Follow
May 13, 2022
•
10 min read 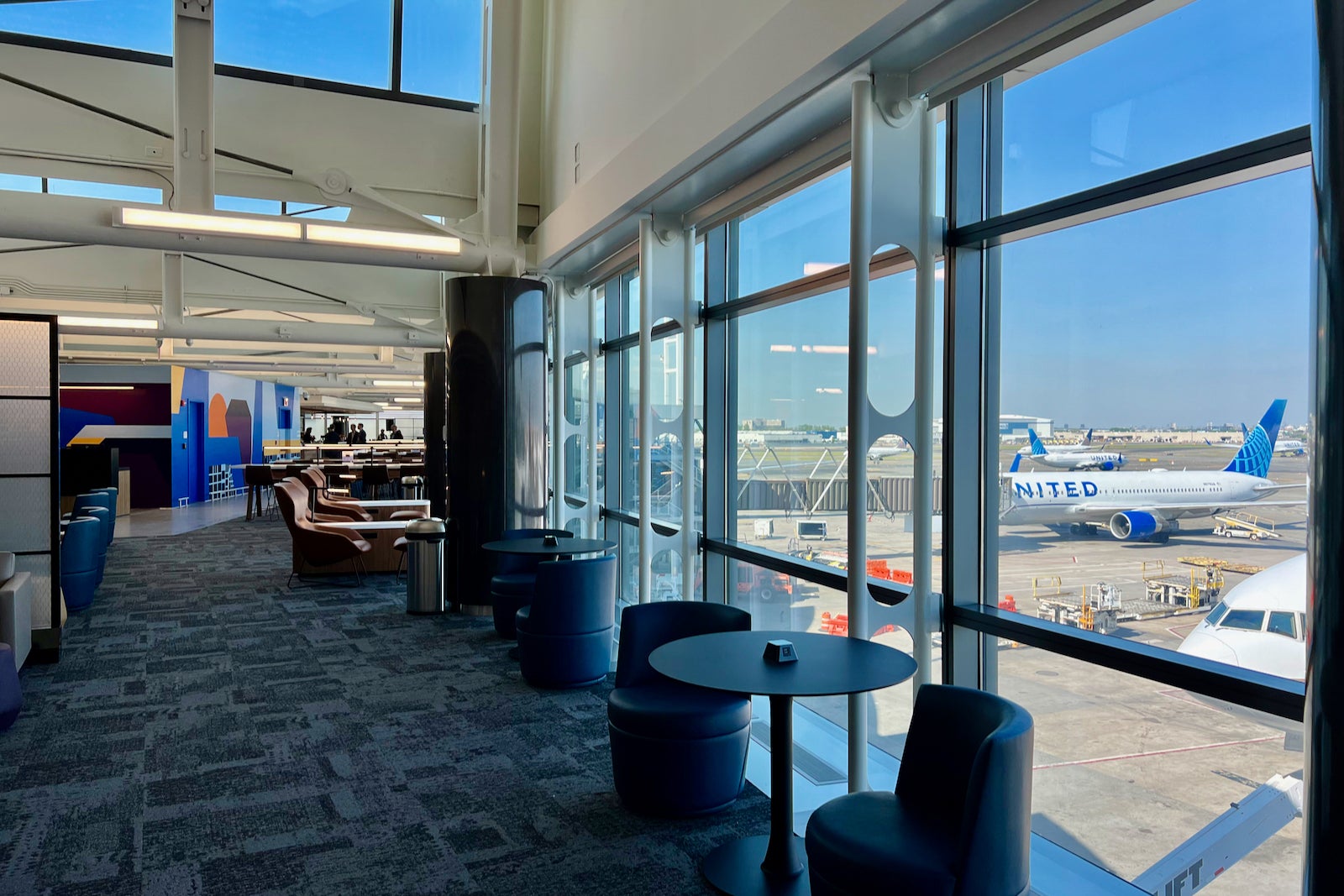 It’s the day that many loyal United flyers have been waiting for: the airline’s one-of-a-kind club in Newark is finally ready for its grand debut.

In recent years, United’s lounge situation in Newark has been underwhelming, to say the least.

When United opened the business-class-only Polaris Lounge at Newark in 2018, it took the space of a former “standard” United Club.

That conversion left flyers with just one United Club in the entirety of Terminal C, which houses the bulk of the airline’s hub operations. (Several pop-up clubs have emerged over the years, but none have been a permanent solution.)

Since then, the United Club near gate C74 has been woefully overcrowded, especially during peak departure banks. More often than not, the club is too busy to accept one-time passes, which are a popular perk of United’s co-branded credit cards. The space is also quite outdated, as it still features the legacy design from when it was a Continental President’s Club.

Fortunately, United has a solution.

In February 2020, the carrier unveiled plans to debut a “one-of-a-kind” Club at Newark, which was poised to be a big upgrade for flyers and for the airline’s Northeast hub.

Despite a nearly year-long construction delay, the lounge is ready for its grand opening on May 19, coming at a perfect time on the heels of what’s predicted to be the busiest summer travel season since 2019.

In anticipation of the grand opening, United invited TPG to get a first look at the new space, and it lives up to the hype. Come see for yourself.

The first thing you’ll notice when you pass by the new United Club near Gate C123 is the dramatic entrance.

Escalators take you to an upper-level area that was built specifically for this club. The entrance is flanked with a check-in kiosk, automated check-in kiosks (a new feature debuting in this location) and a painting called “Jazzland” by Gilbert Hsiao.

As you enter, you’ll get your first glimpse at the great views from this space. Thanks to the floor-to-ceiling windows that line the perimeter of the lounge, there’s plenty of natural light (something that was sorely missing in the old C74 club).

Once inside, you’ll find yourself in the welcome area that some United employees are calling the “library.”

At this point, you might do a double-take — it’s hard to believe that this is in fact a United Club, let alone one in Newark.

There’s a “hydration station,” as United calls it, in the corner, which gives way to some private workstation nooks, a variety of couches and a large rectangular sitting area.

With exposed brick lining the walls, you really might not remember you’re in an airport. This feels more like a Brooklyn co-working space than a membership lounge at United’s Newark hub.

This area will likely prove popular with flyers looking to catch up on some work.

As you continue into lounge, you’ll find the two main dining areas, one of which continues with the exposed brick theme. The other dining area features standard bench seating and shared tables.

The rest of the relaxation space wraps around the outer perimeter of the lounge. There’s a variety of seating options that range from couches to recliners to individual tables.

There are several high-top workstation tables as well.

The pictures alone should give you a good sense of the space, but it’s worth reiterating that this lounge is a massive upgrade compared to the one it replaces.

Furthermore, the new space sets a very high bar for the future of United Clubs. The airline didn’t just copy and paste its existing cookie-cutter club concept and place it in Newark.

Instead, United set out to create a one-of-a-kind space, and it succeeded with flying colors.

Speaking of color, there are several murals and paintings on display throughout the lounge, each commissioned specially by United to reflect the local area.

While not as comprehensive of an art collection as you’ll find in the newest Delta Sky Clubs, it’s great to see United investing in local artists and adding a local flair to its lounges.

At nearly 30,000 square feet, the new United Club in Newark is the airline’s largest-ever lounge.

With seats for nearly 500 passengers, the airline is hopeful that it will be large enough for even the busiest departure banks in the afternoons and evenings.

As mentioned, there are plenty of different seating types to match your mood and relaxation (or work) style.

Every seat is within an arm’s reach of an outlet or USB port, and you’ll have no trouble connecting to the fast and free Wi-Fi network once you’re inside.

It’s worth noting that United didn’t add any phone booths or private workstations to the lounge, an amenity that some road warriors might miss.

United has taken a lot of flack recently from frequent flyers for its subpar lounge catering at major hubs. The airline is working through supply chain constraints, and hopefully, the Newark lounge will be ready with elevated offerings from day one.

That said, the physical buffet spaces are visually appealing and will offer plenty of room to move around.

With a colorful “Newark Liberty International Airport” mosaic piece etched into the wall above the buffet, you definitely won’t forget where you are.

In addition to the main buffet (which was prepped for a formal welcome reception during my visit), there’s a hydration station near the entrance with light bites and soft drinks.

There’s also a fully stocked bar in the center of the lounge, with nearly 25 barstools for those looking to socialize before their flight.

Like its existing clubs, United will offer a selection of complimentary alcoholic beverages, as well as an assortment of premium liquor for purchase.

The barista is in

That’s right, the airline installed a coffee bar next to the bar, which will be staffed by a barista who can create custom Illy beverages. Cold-brew, matcha, espresso — you name it, and the barista will whip it up for you (for free).

Those who prefer using self-service coffee machines will appreciate that United installed four such machines throughout the space.

This is big news, especially for those departing on or connecting from long-haul flights: United is once again offering showers at the club.

Before the airline opened Polaris Lounges, many standard United Clubs offered shower suites for those looking to refresh during their journey.

However, once the business-class-only Polaris outposts started popping up across the country, the airline removed or remodeled most of its clubs to remove the shower suites.

But now, the airline is bringing them back to Newark with the opening of the new club there.

There are six shower suites in the Newark club. Each features a walk-in shower, toilet and vanity area. The suites are stocked with Sunday Riley amenities and Saks Fifth Avenue-branded towels, the same brands you’d find in the Polaris lounge and onboard the plane in premium cabins.

I’d expect that the line for a shower could get quite long, so I’d recommend heading directly to the shower reception area if you’re looking to use one.

The new United Club is home to the second-nicest restrooms in the concourse (after the Polaris Lounge).

With individual stalls, mirrored vanities and some cool wall art, it’s a night-and-day difference relative to the restrooms in the C74 club.

There’s even a separate all-gender restroom along the hallway that spans from the entrance of the lounge to the dining area.

Plus, you’ll find a relaxation/nursing mother’s room next to the dining area, a new amenity that many will likely appreciate.

Perhaps the most exciting upgrade, especially for aviation enthusiasts, will be the views. In fact, the lounge offers perhaps the best views of any space in Newark.

Thanks to the lounge’s favorable location on the upper level of the terminal, you’ll enjoy scenes of United aircraft moving around the apron (many of which will be widebodies since the bigger gates are in the C3 pier that also houses the lounge).

On a clear day, you’ll even catch a glimpse of the lower Manhattan skyline in the distance, with One World Trade Center towering above the mix of United liveries in the foreground.

Of course, the excellent views also mean that there’s plenty of natural light in the lounge, a welcome feature compared to the outpost this new one replaces.

Until now, if you asked me to name my favorite United Club, I’d probably pick London Heathrow or maybe the new(ish) location in Los Angeles.

But going forward, there’s a new winner in my book: the United Club next to Gate C123 in Newark.

United’s new club at its Newark hub is finally here, and it’s impressive.

With a unique design, modern decor and a plethora of seating options, the space is easily one of, if not the, nicest clubs in the network.

The physical space is a big upgrade — and hopefully, the food, beverages and service will match once the space formally opens on May 19.