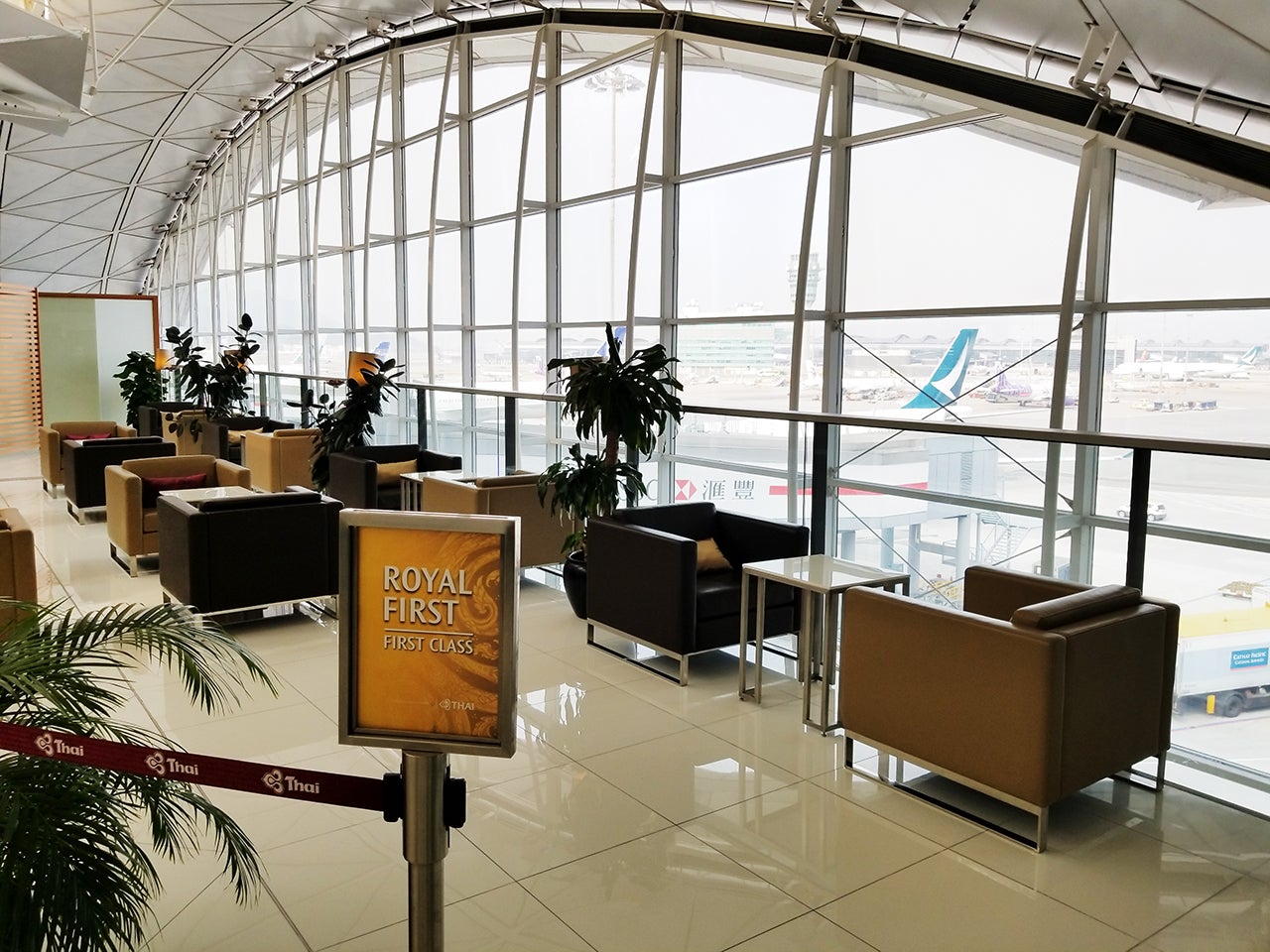 Hong Kong's Chek Lap Kok International Airport (HKG) is the eighth-busiest in the world, and the home base of Cathay Pacific, a close partner of American Airlines in the Oneworld alliance. United and Delta also fly there, and as a gateway to Asia, it sees a lot of US passengers — many with access to lounges. With several of these available, which one should you choose? During a recent trip from HKG, I checked them out to offer a comparison.

I was flying on United's UA180 to Newark — which incidentally has the distinction of being the longest nonstop operated by a Boeing 777-200ER — and had arrived quite early in order to check excess baggage. After a 15-minute trek by train, escalator and moving sidewalk through the immense Terminal 1, I found myself with a plethora of lounge choices like I'd never seen before.

Directly adjacent to, or within a minute's walk of each other there were the United Club, American Express Centurion Lounge, Thai Royal Orchid Lounges and the Plaza Premium lounge.

The options were endless, but I had enough time to hit all of them — and since you may also one day be faced with this dilemma of riches, as a public service, that's exactly what I did. Each excelled in one way or another over the rest, so your individual needs on any particular day might influence your selection.

I had access to the United Club three times over, as I was traveling on a Polaris business class ticket, I'm a StarAlliance Gold member and I have the United Club Card. Normally, I wouldn't be too thrilled about a United Club, but this one is among the five best Clubs worldwide, according to TPG's Editor-at-Large and United million miler Zach Honig.

The entrance experience was quite standard — there wasn't any line, and after a quick scan of my boarding pass, I was in. It was noticeably less crowded than other United Clubs I've visited, and there were nice, modern showers and solid hot/cold food selections. (Side note: This was the only one of the clubs to have bacon, and it was seriously delicious.)

The views of the tarmac and hills in the distance were quite impressive.

The beverage selection was good overall, but the lounge did not have a full bar — only a small self-service selection of beer, wines and hard liquors, all complimentary.

Just before the doorway to the main lounge was a frosted glass door to the right leading to the Global First Class United Club Lounge. I stuck my head in there before being shooed away, and it looked much like the rest of the club, except with only one guest inside. United only has a couple of flights per day from HKG with first-class cabins, so it's likely that the first-class section is basically never crowded. United's first class is going away with the reconfiguration of 777-200s, so that Global First section will probably disappear too. But for now, the section has to be the one of most exclusive lounges in the world. It'll be years before the new Polaris Lounge here opens; the airline's tracker of Polaris progress says only "future location," which does not bode well.

The space features a private meeting room, a smaller room for taking phone calls, showers and a huge, fully stocked bar. The hot buffet was very good and the orange juice freshly squeezed. The stylish bathroom even had super soft terrycloth towels to dry your hands with.

The buffet is adjacent to the entrance to the Centurion-exclusive part of the lounge (more on that below.)

A guarded doorway led to the portion exclusively for Centurion cardmembers, which I have been since 1999.

The biggest difference in this elegantly decorated section of the lounge was the ability to order food from an a la carte menu. During my visit, breakfast was being served, since United's EWR flight departs at 10:25am. There was a great variety of breakfast dishes to choose from, including pancakes, made-to-order eggs; eggs Benedict; eggs Florentine; omelettes; salad; a Chinese dish of congee, fried egg noodles with bean sprouts, fried dough and a dim sum basket and finally an Indian vegetarian option. The attentive wait staff in this room gets high marks and really helps make the experience feel luxurious and exclusive.

I ordered eggs Benedict, which I thoroughly enjoyed.

Both parts of the lounge feature amazing AvGeek views, with a massive arched window overlooking the ramp. If you like to eat and drink for free while gazing at airplanes, this might be one of the best places in the world to do just that.

The Plaza Premium Lounge was ranked by TPG as one of eight Priority Pass lounges in the world worth visiting on a layover. I accessed it as a Priority Pass member, thanks to my Amex Centurion card (many other premium cards also come with complimentary Priority Pass memberships). This particular lounge can be accessed fairly easily, as it has partnerships with dozens of other loyalty programs including 18 different airlines and 16 banks. With that being said, it's a relatively safe bet that many travelers will have a card in their wallets that will grant access to this lounge for free, or perhaps for a small fee. When I visited, the line was a bit long, but I wasn't surprised since there so many different ways to get in.

Unlike in some of the other lounges, not everything was free in the Plaza Premium lounge. Free food options were fairly basic, and you'll only get non-alcoholic beverages without paying. There were a limited number of wines, beers and liquors available for purchase.

This lounge also provided a good view of the planes in the gate area, and the seating areas weren't too crowded.

Several additional services, including massages and spa treatments, were available for purchase. Showers were also available for a minimal cost. If you're looking to treat yourself to some relaxation on a layover, this could be the place for you.

The last lounge I visited before my flight back to the States was Thai Airways' Royal Orchid Lounge. Thai is a Star Alliance carrier, so I was able to enter since I was flying business class on a partner airline.

The buffet was quite large and boasted the most diverse food selection of any of the lounges I visited this trip — there were even popsicles available!

As you can see, the views were just about as good as what you'd get in any other of the lounges. This particular lounge also featured a roped-off seating area for first-class passengers — but it wasn't any different from the rest of the lounge.

In the event your computer dies on you, or you decided not to bring one at all on your trip, you might want to head to this lounge — its most unique feature is a dozen computer stations, all connected to the internet and free to use. None of the other clubs had anything like this available.

HKG is a great airport to have a long layover at. There are plenty of amenities to keep you occupied, and if you have lounge access, you could spend all day lounge hopping without getting bored. If you have enough time (and the appropriate access) you should definitely spend some time moving among the various spaces so that you can experience the best that each has to offer. If I had to pick just one, though, I'd have to say that the American Express Centurion Lounge is the top pick among this group, as it boasts the best combination of design, functionality and food and beverage offerings.

Daniel Hank is a seasoned road warrior, who's traveled to all seven continents. He works as a film and television producer based in New York.