JetBlue vs Frontier: Who will win the battle over Spirit and why does it matter?

Articles
Scott McCartney covered the airline industry for more than 25 years at The Wall Street Journal and wrote the paper’s "Middle Seat" column. He is now an airline industry consultant and adjunct professor at Duke University.
June 09, 2022
•
7 min read 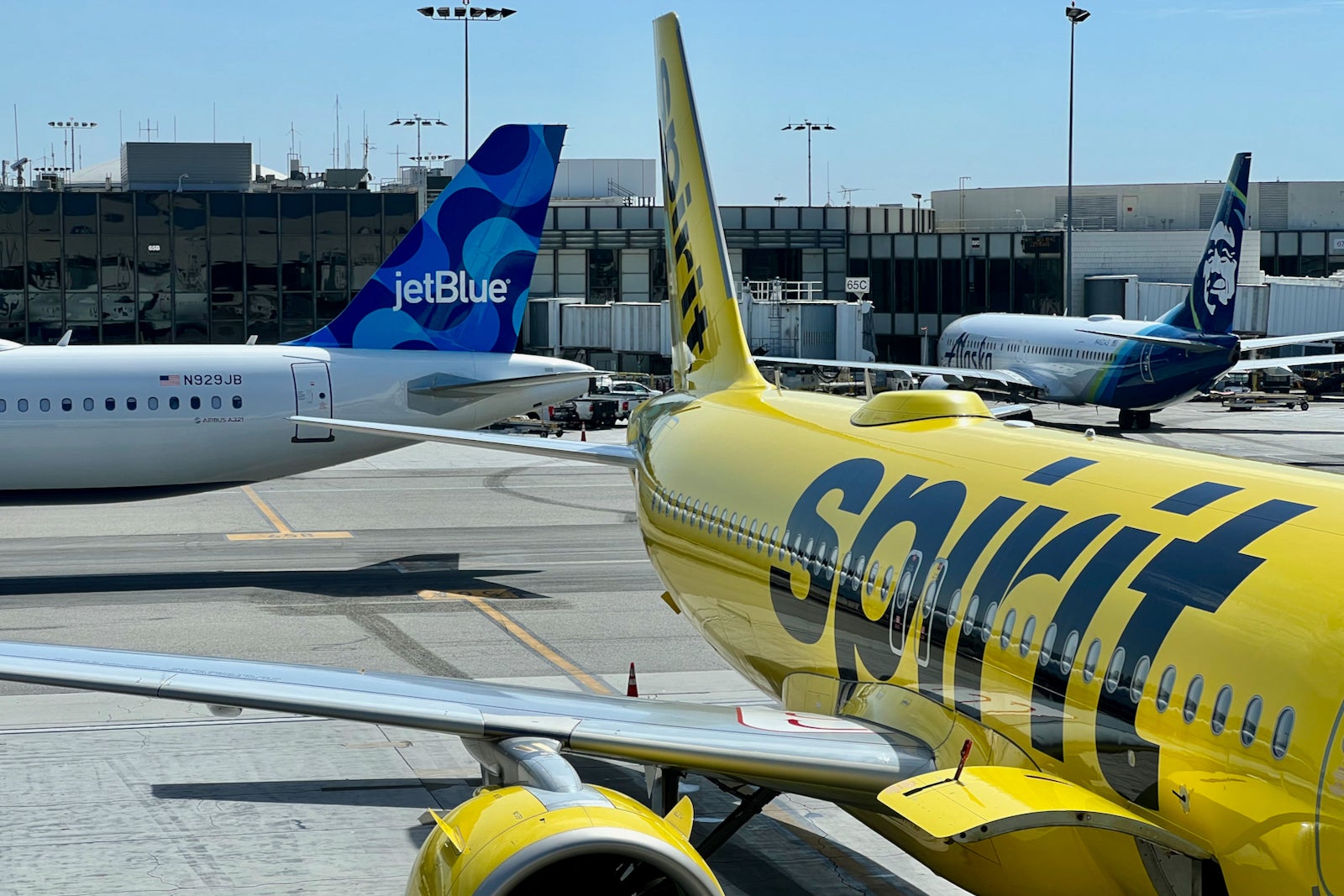 The battle between Frontier Airlines and JetBlue is about a lot more than just which carrier will get to acquire Spirit Airlines. It’s ultimately a test of what kind of air service Americans want for the future.

Both Frontier and JetBlue are trying to buy growth on Wall Street because it’s difficult and expensive to acquire new airplanes, get new gates at crowded airports and hire new employees. Pilots, in particular, are in short supply, and Spirit has about 3,000 of them.

The winner of this battle over Spirit will become a credible fifth U.S. major airline capable of competing against the "Big Four" — American Airlines, Delta Air Lines, United Airlines and Southwest Airlines. Those four airlines grew through mergers approved by regulators.

Why do airlines merge?

However, this showdown represents a bigger issue than whether the U.S. will approve further consolidation. This merger battle is likely the last stand for the idea of a higher-quality coach alternative.

Bare-bones carrier Frontier argues it can spread more low-fare competition with Spirit. While this might seem logical, the reality is that big carriers have increasingly found ways to ignore cheaper competitors because they know most of their customers won’t fly them.

For those who want cut-rate service, big airlines offer stripped-down basic economy fares which lack previously routine perks such as advance seat assignments and even carry-on baggage. These airlines also vastly limit the number of seats on each flight offered at the low-cost competitor’s prices.

A comprehensive MIT study published in 2013 found JetBlue has a greater impact on prices than Southwest or Spirit. The MIT researchers found the presence of JetBlue on a route decreased average fares by $32 one-way; Southwest’s impact was only $17. Spirit’s average impact on markets was a $22 reduction.

Those numbers don't account for the extensive add-on fees Spirit is famous for which actually raise the cost of travel. Last year, Spirit collected an average of $59 in nonticket revenue per passenger per flight segment.

Spirit has rejected JetBlue’s $30-a-share cash offer in favor of Frontier’s cash-and-stock offer, which was valued Friday at about $21 a share. The reason, according to Spirit, is that JetBlue has a greater likelihood of rejection by the Justice Department. Spirit shareholders now are voting on whether to take the Frontier deal or reject it for JetBlue’s cash.

Spirit has rejected JetBlue’s $30-a-share cash offer in favor of Frontier’s cash-and-stock offer, which was valued Wednesday at about $21 a share. The reason, according to Spirit, is that JetBlue has a greater likelihood of rejection by the Justice Department. Spirit shareholders now are voting on whether to take the Frontier deal or reject it for JetBlue’s cash. On Wednesday, Spirit postponed the end of the voting from Friday to June 30 to allow "discussions with Spirit stockholders, Frontier and JetBlue."

It does appear that JetBlue is basically trying to eliminate a low-fare competitor. JetBlue has offered to mitigate this by saying it would divest all assets acquired from Spirit in New York City and Boston, JetBlue’s biggest hubs.

For JetBlue, the real prize of a Spirit acquisition would be the opportunity to grow in the middle part of the country. Spirit has gates in Chicago, Las Vegas, Dallas, and Houston among other cities. Not to mention, it has the planes and pilots to serve them.

JetBlue has lost some loyal fans with episodes of widespread delays and cancellations. Though tattered, JetBlue still offers more coach legroom than other U.S. carriers. Its snacks, seat-back televisions and free Wi-Fi are also appreciated.

The airline's founder David Neeleman, who launched JetBlue in 2000, intended the airline to be a better coach product with friendly employees. Twenty-two years later — it still is.

To be sure, acquiring Spirit would change JetBlue. Spirit packs 182 seats in its Airbus A320s; JetBlue has 162 seats in the same airplane. That’s a huge difference.

You might see JetBlue add seats to its planes as it removes seats from Spirit; its planes may end up with a fleet that has a dense, Spirit-like seating arrangement in the back and a more traditional, legroom-friendly JetBlue arrangement in the front. Like on other airlines, customers who want space will have to pay for it.

Frontier, in its latest iteration, has grown even more Spirit-like; the carrier implemented add-on fees and offers rows of seats with as little as 28 inches of space (compared to 32 inches for JetBlue).

For example, Frontier changed its baggage policy in March to limit checked bag weight to 40 pounds. (Spirit does that, too.) JetBlue has a more common 50-pound limit. Show up at Spirit or Frontier with a 45-pound bag and you’ll pay overweight baggage fees of $50 per bag in each direction.

What’s more, Frontier had the worst record in the U.S. regarding refunds for canceled flights in the pandemic. Frontier gave customers vouchers good for only 90 days. Naturally, many vouchers went unused, letting the airline pocket money that should have been returned to customers when it canceled flights. More than 5,500 complaints against Denver-based Frontier were filed at the Transportation Department in 2020 — 80% were regarding refunds.

Colorado Attorney General Phil Weiser called for a DOT investigation of Frontier in 2020, and this year, he questioned the Frontier-Spirit merger.

“Companies that take advantage of consumers must be held accountable,’’ Weiser said in a March statement.

For many travelers, price is what matters most. However, there are many travelers willing to pay more for a tolerable product and better service. Ironically, the fate of Spirit — the pioneer of cheap travel — will determine whether those flyers have more choice or not.