Why Southwest's Companion Pass changes are more nefarious than they seem 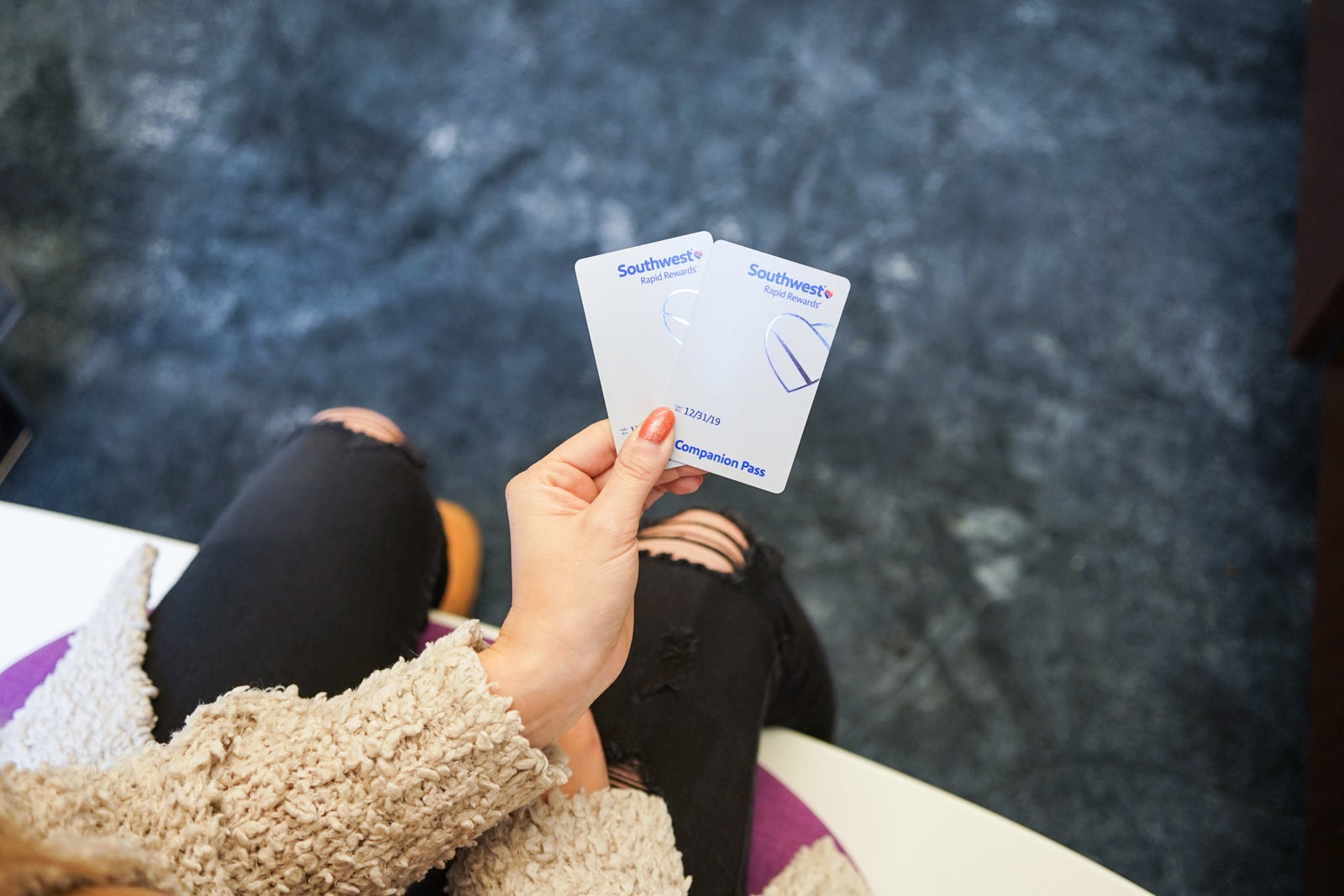 Why Southwest's Companion Pass changes are more nefarious than they seem
This post contains references to products from one or more of our advertisers. We may receive compensation when you click on links to those products. Terms apply to the offers listed on this page. For an explanation of our Advertising Policy, visit this page.

If you've been a part of the points and miles world for even a small amount of time, chances are quite good that you've heard of the Southwest Companion Pass. This perk allows passholders to bring along a designated companion on every Southwest flight they take — both paid and award tickets — just by paying any government-imposed taxes and fees. Just Thursday, the carrier just announced that, starting Jan. 1, 2020, it's raising the annual Companion Pass qualification threshold from 110,000 points to 125,000 points.

That's an increase of 13.6%, a notable but not massive jump. Southwest has also provided nearly two and a half months' notice of the change, which could be considered eons in this day of no-notice devaluations. However, there's something lurking behind these numbers that's far more concerning.

Here's why I think Southwest's Companion Pass changes are more troubling than initially meets the eye.

To see how I arrived at this conclusion, let's consider three facts:

As a result, early- to mid-October has almost always been the best time to apply for a Southwest credit card. If you waited to until near the end of the three-month window to hit the spending thresholds and earn the sign-up bonus, those points would post in January 2020, thus counting toward that year's Companion Pass qualification and allowing you to maximize the amount of time that you hold the pass.

The end result? Just a week or two into the new year and you've already earned a large chunk of the points required to earn the Companion Pass. And if you were fortunate enough to use this strategy to get both a personal and business version of a Southwest card (you can no longer hold two personal cards at one time), your combined sign-up bonuses by themselves might get you enough qualifying points to earn the pass outright.

Here's the problem. Four of Southwest's credit cards were recently offering enhanced sign-up bonuses. Those bonuses expired Wednesday. I'd be willing to bet that a number of savvy TPG readers applied for one of those cards in the last two weeks, planning to use the exact strategy I identify above to put the Companion Pass easily within reach for nearly two years. Now, within 24 hours of these offers being pulled, Southwest has raised the requirements to earn the Companion Pass.

That's a bad coincidence at best and downright nefarious at worst. Someone who applied for a card with the intent to earn the sign-up bonus in early 2020 en route to the Companion Pass suddenly needs to find 15,000 extra points to accomplish that goal.

Let's put some numbers to this. Say you applied for the Southwest Rapid Rewards Performance Business Card with the (now-expired) offer of 80,000 bonus points. If you waited to spend the required $5,000 until after your December statement closed, you'd take home 85,000 points in January, leaving you just 25,000 points shy of the previous qualification threshold (110,000 points) to earn the Companion Pass. With the changes, you'll need an additional 40,000 points come January. That's no longer a 13.6% increase; you're now looking at a 60% jump in points over what you thought you needed to earn.

It's even worse for someone who signed up for the Southwest Rapid Rewards Premier Business Credit Card (which is still offering a sign-up bonus of 60,000 points when you spend $3,000 on purchases in the first three months) plus one of the three personal cards. If you hold off your spending on both of these cards until December, you'd earn 104,000 qualifying points in early January, just 6,000 points shy of the old qualification threshold for the Companion Pass. Now, you'll actually be 21,000 points short — an increase of 250%!

Grabbing these extra points will require added spend on the card(s) you opened, additional flying with Southwest or more purchases with Rapid Rewards' partners. In other words, to maintain your strategy of earning the Companion Pass in early 2020, you now need to do more business with Southwest than you originally planned. (Here are some ways to earn Southwest points.)

Simply put, whether it was intended to be that way or not, it feels like a bait and switch.

Here's an analogy. You start an elite status challenge with an airline that requires an up-front payment of $500 for temporary status. Once you pay that fee, you must fly 10,000 miles in three months to keep it for the rest of the year. However, just a week after paying the fee, you receive notification that the threshold has been increased to 16,000 miles. Wouldn't that be considered unacceptable?

There's another important aspect to these changes: the various application restrictions from credit-card issuers. The most well-known is likely Chase's notorious 5/24 rule, which holds that if you've opened five or more credit cards across all issuers in the past 24 months, your application for any new card will almost certainly be denied. However, we've seen others — including Bank of America — institute similar policies. As a result, every credit card application needs to be carefully considered and timed so you don't "waste" a new card on a less-than-exciting bonus.

Unfortunately, I'd guess that some recent applicants feel like they've done just that now that Southwest has raised the bar on earning the Companion Pass at a point where it certainly affects those who have already implemented their 2020 strategy.

Now, it's correct that Southwest isn't rescinding these offers, so applicants from before today will still be able to earn the elevated sign-up bonuses in effect at the time they applied. Those points will lead to a lot of Southwest award travel, so this isn't a total loss. In addition, those who picked up a personal card along with the Performance Business card under the (now-expired) offers are still fine, since earning both of those sign-up bonuses will get you to the new 125,000-point qualification threshold.

Nevertheless, the timing of all of this is suspect. Sure, new cardholders can still reach the higher Companion Pass qualification threshold, so Southwest hasn't completely removed the possibility. The carrier has just ensured that you'll spend more money with it and its partners to do so — right after offering higher bonuses to entice you to apply for a credit card.

Here's how this could've been handled better. First, Southwest could've announced these changes before Oct. 1. It's no secret that early October is the best time to apply for a Southwest credit card, so notifying prospective applicants of the new, 125,000-point qualification threshold would've allowed them to apply with their eyes wide open. However, I'd venture a guess that this would've led to lower numbers of new accounts in the first two weeks of this month, a direct impact on the bottom lines of both Southwest and Chase.

While the ship has sailed on this first thought, the second option is still on the table: Delay the new qualification requirements until 2021. This would allow those who recently picked up a Southwest card to earn the Companion Pass based on the policy in effect at the time of their application. And I would argue that this might even spur more card applications over the coming months than would otherwise happen. If someone knows that the requirement is increasing from 110,000 points to 125,000 points starting in 2020, they might be more inclined to apply for these cards now to utilize the lower qualification threshold and enjoy the pass for the rest of 2020 and all of 2021.

Note that I have no skin in this game. I didn't recently apply for a Southwest Card, as I'm still above 5/24. This is written not to vent for my personal benefit but instead to advocate for our loyal readers who, like me, view this move as entirely disingenuous on Southwest's part.

Any way you slice it, this is an unfortunate development. While you can still earn the Companion Pass by leveraging credit cards from the Rapid Rewards program, it's now more costly to do so. This wouldn't have been as big of a deal if it weren't for the timing, as these changes come on the heels of enhanced (now-expired) bonus offers on four of Southwest's credit cards. I sincerely hope that Southwest reverses course on this, as this is a move that is sure to anger many new cardholders who had the potential to become long-term Southwest customers.

Featured image by (Photo courtesy of TPG)
Editorial disclaimer: Opinions expressed here are the author’s alone, not those of any bank, credit card issuer, airline or hotel chain, and have not been reviewed, approved or otherwise endorsed by any of these entities.