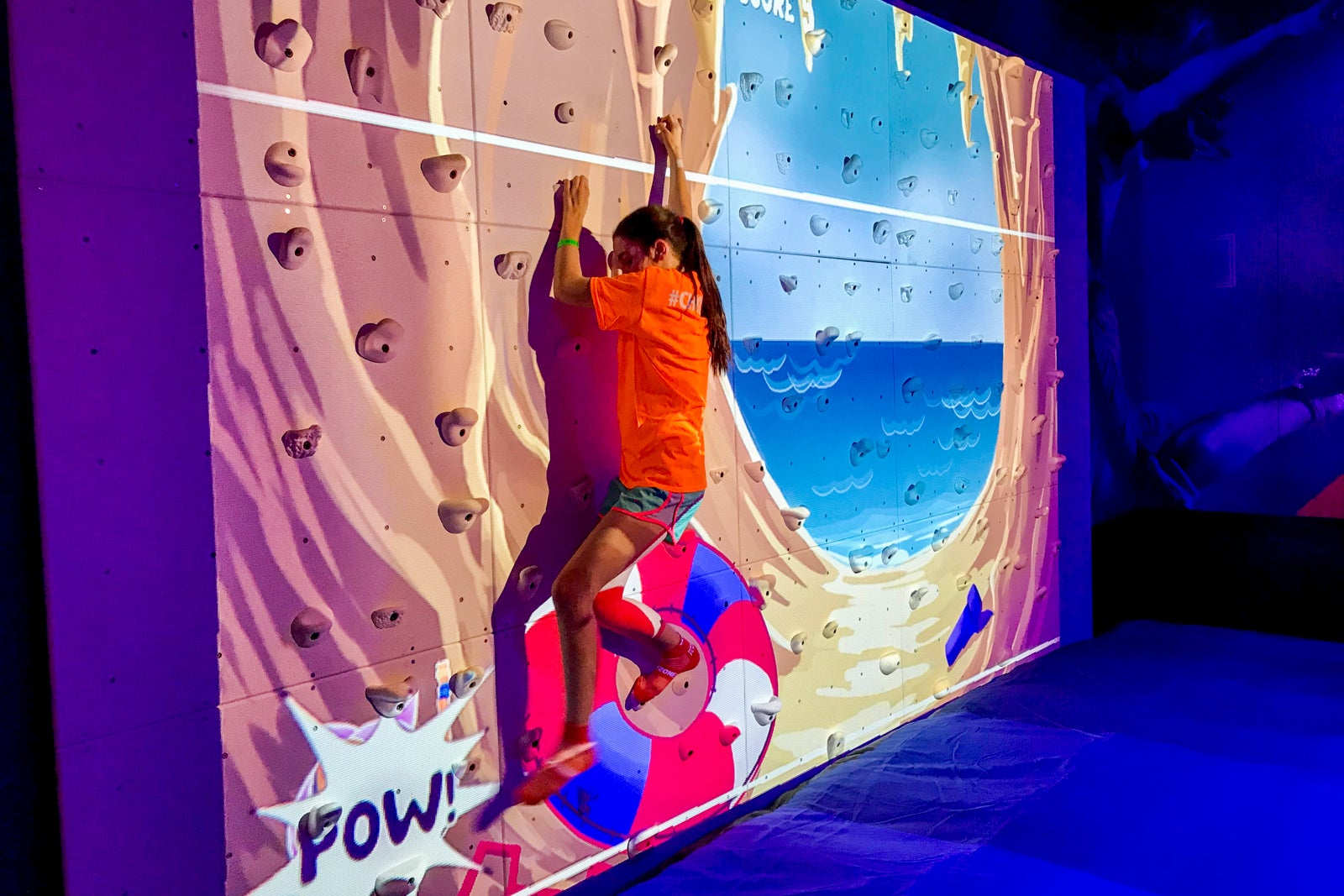 Kids will love this Sky Zone trampoline park on Carnival's latest ship
This post contains references to products from one or more of our advertisers. We may receive compensation when you click on links to those products. Terms apply to the offers listed on this page. For an explanation of our Advertising Policy, visit this page.

You can now play trampoline dodgeball on a cruise ship. Trampoline basketball, too.

As I saw during a sneak peek at the 4,008-passenger vessel in advance of its first sailing, the extra-charge attraction is an at-sea version of the 200-plus Sky Zone parks found across the U.S., Canada, Mexico and nine other countries.

Like its land-based sisters, it has padded trampoline areas where you don’t just jump around but also take part in games such as dodgeball and basket shooting while bouncing. There’s also a low-rise balance beam above a padded area for jousting contests (with harmless soft padded bats) and a climbing wall augmented with interactive game elements.

As I wrote in my initial review of Carnival Panorama, I was a little underwhelmed by the space on first sight. Filling a two-deck-high interior area in the middle of the vessel, it’s about 3,000 square feet in size. But my view changed after just a few minutes of tumbling around during a test session with other travel writers. It's a riot, with lots of interactive silliness (think: a tug-of-war game where the loser, who may or may not have been me, goes flying into a big padded cushion).

But this feature isn't for older travel writers, it's clearly for kids, including the littlest ones. Many of the bouncy attractions aren’t too intense, so you can have a wonderful afternoon here playing around with your toddler or young child, who should absolutely love it.

Sky Zone even offers one-hour “toddler time” sessions exclusively for children ages six months to 5 years accompanied by an adult ($5 per child and $5 per adult). There are additional sessions for children ages 6 to 14, as well as passengers 15 and older. The latter are priced at $12 per person, which includes a pair of Sky Zone socks.

Come nighttime, the Sky Zone opens to all-ages “blacklight glow parties” where you wear a custom glowing T-shirt as you bounce around (entry costs $18, including the shirt, which is yours to keep).

The Sky Zone on Carnival Panorama arrives as megaship operators such as Carnival, Royal Caribbean and Norwegian Cruise Line battle for the family market with an ever more outlandish array of fun-focused, kid-friendly shipboard attractions. Royal Caribbean’s latest vessels feature everything from bumper cars to skydiving simulators. Norwegian has been rolling out the first go-kart tracks at sea. And Carnival itself is in the midst of developing what surely will be the most over-the-top family cruise ship attraction ever: A full-blown roller coaster.

Carnival isn’t the first line to put a trampoline-related attraction on a cruise ship. Over the past two years, Royal Caribbean has added a virtual reality bungee trampoline experience called Sky Pad to the top of several vessels. But those attractions, in which riders wear virtual reality headsets while bouncing in a bungee-like contraption to experience a virtual world, are significantly different than the Sky Zone.

For the record, my session began with a very thorough safety briefing from the Sky Zone staff, and there's a long list of clearly marked and sensible rules in the space such as no running, no flip flops, no double bouncing and no horseplay. There also are Sky Zone staff members monitoring the play in every area. Still, you might want to caution your kids before letting them loose.

And what I suspect will be the most popular attraction at the Sky Zone trampoline park isn’t trampoline-related at all. The room’s climbing wall, designed by ValoClimb, is a high-tech version of a climbing wall that incorporates graphics projected onto the climbing surface. Sensors track your movements and you interact with the graphics during games such as Whack-a-Bat, where you whack as many bats as possible to score. I found it loads of fun.

Christened last week in Long Beach, California by Wheel of Fortune’s Vanna White, Carnival Panorama is the first new Carnival ship to be based on the West Coast in two decades. Starting this week, it’s sailing weekly voyages to the Mexican Riviera out of Long Beach that feature stops in Puerto Vallarta, Mazatlan and Cabo San Lucas. Fares start at $474 per person, based on double occupancy.