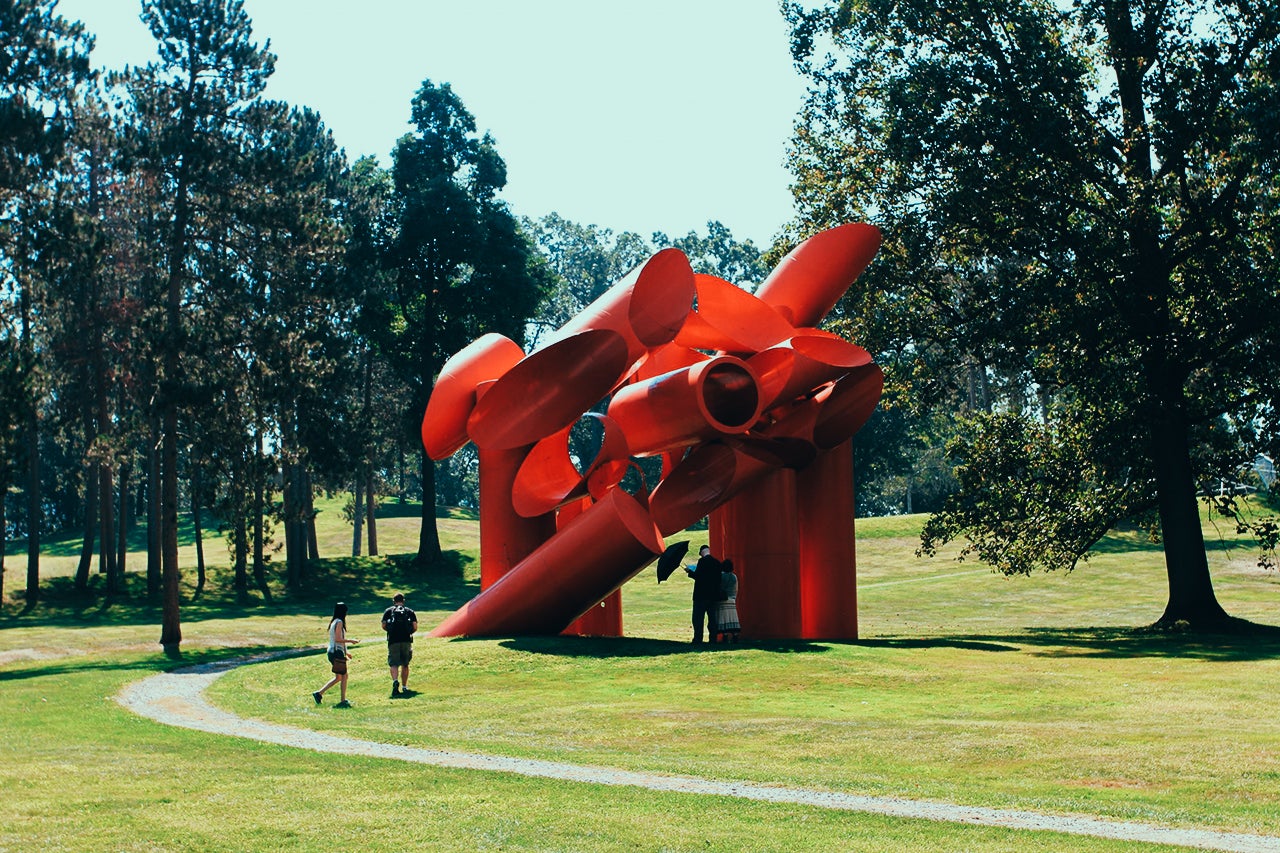 Ever notice how packed MoMA gets on a rainy day? The same goes for the Louvre, the British Museum, the Uffizi Gallery and pretty much every indoor mecca of enlightenment whenever the weather takes a turn for the worse. Ticking a great museum off the never-ending list of must-sees is one of the best ways to fill a gloomy day while traveling. But what about getting your culture fill when the weather is nice? Head to these outdoor museums and sculpture parks.

Just an hour and a half north up the Hudson River from NYC, Storm King is one of the world's leading centers for outdoor art. The 500-acre property features more than 100 works designed by leading artists of the modern era. Alexander Calder's gigantic abstract steel forms are set on rolling meadows with tree-covered mountains as a backdrop. Maya Lin's undulating mounds of earth dubbed the "Wavefield" sits near Andy Goldsworthy's stacked stone "Wall" that winds its way into a creek and through a forest of dense trees. On weekend mornings during the summer months, visitors can zen out with a free morning yoga class (and beat the crowds) while taking in the scenery from the viewpoint of a downward dog.

The 105 acres of rolling hills that make up St. Louis's Laumeier Sculpture Park are dotted with electrifying figures sculpted by a wide array of leading artists. More than 300,000 visitors make the pilgrimage to the property to view the 60 large-scale works each year — the most coveted of which is Alexander Liberman's "The Way." The crimson monument, forged from 18 salvaged steel oil tanks, offers a modernist take on the grand classical Greek Temples and Gothic-style cathedrals of the Old World.

New Zealand's expansive answer to Storm King, Gibbs Farm features 1,200 acres of gargantuan figures about an hour north of Auckland. Giant pieces by artists ranging from Richard Serra and Graham Bennett to Peter Roche and Maya Lin play off the dramatic landscape, which stretches along Kaipara Harbor, the largest estuary in the Southern Hemisphere. The most emblematic piece has to be Anish Kapoor's "Dismemberment, Site 1," an 85-meter-long cherry red trumpet cradled in a grass-covered hill.

Mining magnate Bernardo Paz (who was recently sentenced to nine years in prison for tax evasion) started converting this 3,000-acre ranch into a botanical garden with help from his landscape architect friend Roberto Burle Marx in the 1980s before building a series of pavilions and galleries to hold his growing collection of contemporary art. It has since become South America's preeminent open-air museum. The property opened to the public in 2006, offering visitors a chance to view mind-boggling pieces such as Yayoi Kusama's trippy "Narcissus Garden Inhotim," a series of 500 stainless steel balls that sit above the water mirror atop the Burle Marx Educational Center, reflecting the surrounding sky, water, foliage and, as the title suggests, viewers own image.

This former Middle Age abbey farm and Iron Age rock carvings site is set high on a bluff that offers panoramic views of the city and its famous fjord. The long inspiring park is punctuated with dense woods, clearings and free-standing trees, home to Roe deer, squirrels, bats and more than 40 species of nesting birds. Nodding to long (prehistoric) artistic roots, Ekeberg is now home to a growing collection of sculptures that represent 130 years of European art history with works by Jenny Holzer, Damien Hirst, Per Ung and Marina Abramovic's site-specific homage to Edvard Munch's "The Scream," carefully placed at the same location that serves as the backdrop to his iconic painting.

Japan's first outdoor museum, Hakone, founded in 1969, lies a couple hours south of Tokyo, not far from Fuji Mountain. The 17-acre site features stunning views of the recognizable peak amidst a seasonally-changing temperate backdrop (which switches between cherry blossoms in spring to vibrant autumn foliage) as well as around 120 modern and contemporary works by Japanese and international artists. It features more than two dozen pieces by British sculptor Henry Moore and about 100 other pieces by masters such as Isamu Noguchi, Joan Miró, Auguste Rodin, an entire Picasso Pavillon and Toshiko Horiuchi MacAdam's famous "Woods of Net." The colorful hand-knit net is strung from a timber dome built in accordance with ancient temple techniques. An added bonus: The massive structure doubles as an interactive playhouse for kids.

What started as a collection of nearly a few dozen sculptures in 1977 has morphed into one of the greatest rotating collections of outdoor sculptures on the planet. The 500-acre "gallery without walls" has a permanent collection of works by outstanding artists like James Turrell, Barbara Hepworth and one of the largest outdoor displays of Henry Moore in Europe. You'll also find ever-changing (and always impressive) contemporary exhibitions with cutting-edge creators from around the globe including Amnesty International's Ambassador of Conscience award recipient Ai Weiwei, British-Trinidadian Zak Ové (hailed for his changing representations of different African forms) and politically engaging Chilean conceptual-artist Alfredo Jaar.