I fly over 150,000 miles a year, but this flight from Europe made me feel like a complete novice

Articles
Nick Ellis joined The Points Guy in 2016 as an intern and is now Reviews Editor, primarily responsible for arranging, writing (some of), editing and publishing reviews of hotels and airport lounges along with helping manage, write and edit travel content.
Follow
Oct. 24, 2019
•
8 min read 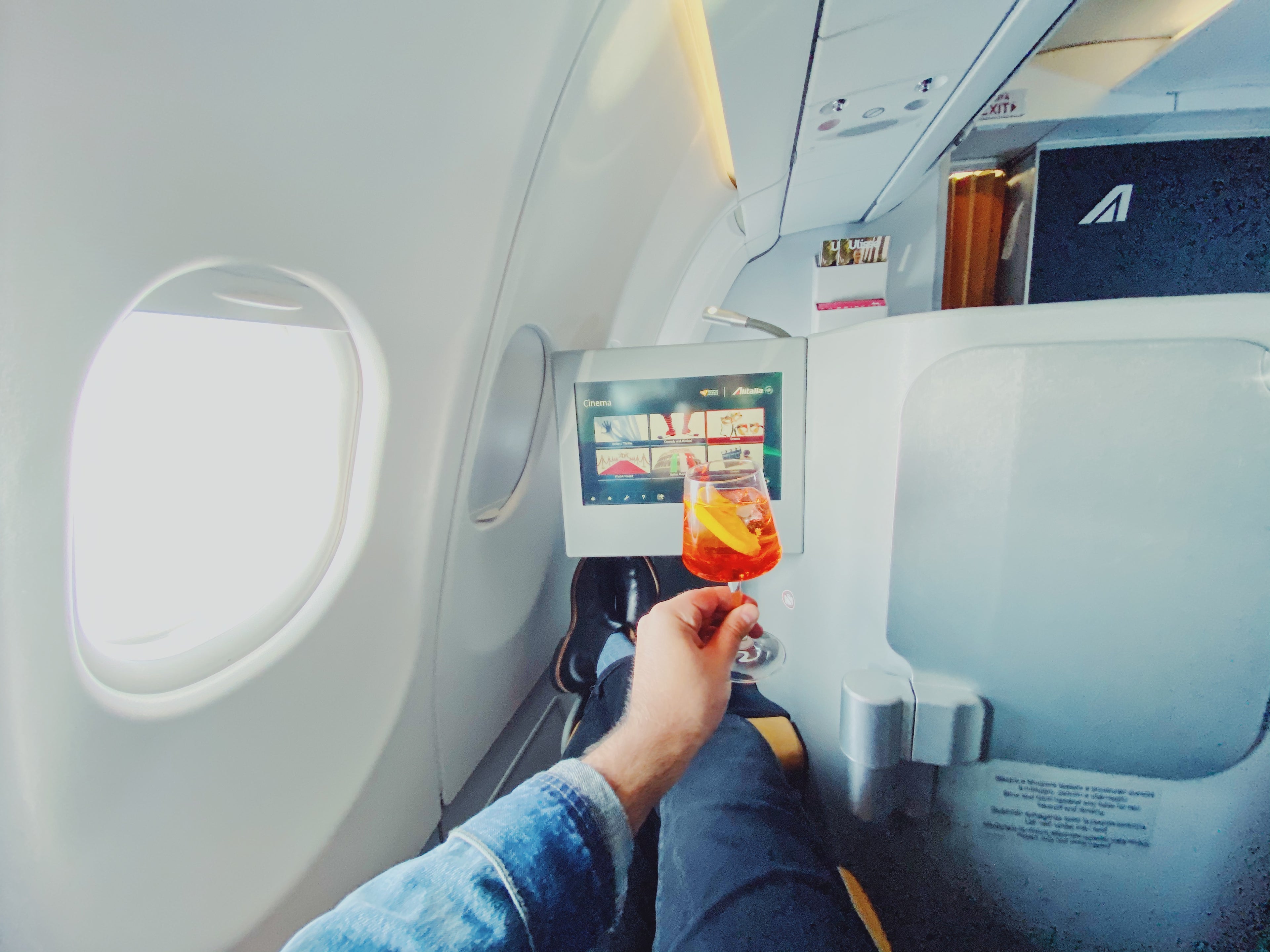 I fly over 150,000 miles a year, but this flight from Europe made me feel like a complete novice
This post contains references to products from one or more of our advertisers. We may receive compensation when you click on links to those products. Terms apply to the offers listed on this page. For an explanation of our Advertising Policy, visit this page.

As TPG's travel reviews editor, it's my job to, well, travel.

Predictably, I rack up a lot of miles in the air -- I'm on pace to reach at least 160,000 miles for the year. And I'm accustomed to routings that would make any sane person quiver. Seriously, though, you should see the looks on people's faces when I tell them that I flew from New York to Sydney by way of Toronto, Atlanta, Seoul, Shanghai and Taipei.

A recent trip to Europe was shaping up to be like just another one of my crazy trips, this one in pursuit of valuable Medallion Qualification Miles with Delta. Long story short, I was in Barcelona flying Alitalia in business class home to New York-JFK. Usually, flying up front implies a seamless, enjoyable experience. Even though I've flown premium classes a lot by now, I still have visions of breezing through the airport, nonchalantly sipping Champagne and munching on elegant snacks in a totally uncrowded lounge before settling into my throne in the sky.

This travel day, however, all of those visions of grandeur were quashed in a cascading series of unfortunate events. And it was pretty much all my fault.

My first mistake was trusting myself (and Alitalia) to make a one-hour, 20-minute connection in Rome (FCO). When I booked the ticket months ago, it didn't even cross my mind that it'd be an issue, since I was blinded by the prospect of earning so many miles that nothing could have gotten in the way of me booking that ticket.

Sure enough, though, on the morning of my flights, I woke up around 3:30 a.m. in Barcelona to a tremendous thunderstorm, one of those that seemingly shakes entire buildings. Living in New York, I know that thunderstorms wreak havoc on airport operations, and I was instantly filled with dread that my first flight of the day would be delayed, leading to headaches for the whole day.

For the next hour before I had to leave, I checked FlightAware. Every time I did, my flight showed "en horario" ("on schedule"), so I headed to the airport as planned.

But then was handed two boarding passes with a prominent "SSSS" at the bottom — the acronym indicating special, additional screening. There'd be no extra screening in Barcelona, where I had plenty of time, but rather in Rome, where I had very little. Great.

My first flight boarded on time, but as soon as we pushed back, the storms got worse, and we spent about 40 minutes taxiing and waiting for our turn to take off. We ended up landing only 12 minutes after the scheduled time, though that meant that there were only three minutes between my first flight landing and scheduled boarding for my flight to New York. I was going to have to hustle.

Things took a turn for the worse as soon as we landed in Rome. As we taxied after landing, I quickly learned we'd be parking at a remote stand. I prepared myself for a long wait for the boarding stairs to appear (I was right), a long wait on the bus before it got moving (also right) and a seemingly interminable crawl to the terminal building (right again). I'd lost a lot of valuable minutes at this point, and I still had to clear immigration and Secondary Security Screening Selection all in about 25 minutes. It was going to be close, but I was sure I could make it.

I was very pleasantly surprised to learn that Leonardo da Vinci-Fiumicino Airport employs an automated passport control system, so I didn't have to face the endless immigration lines and was through in just a few minutes. Now all I had to do was find my gate. Simple, right?

Not for me, apparently.

My boarding pass for my FCO-JFK flight only had "E" listed as my gate, as one hadn't been assigned when I'd checked that morning. And Alitalia's app isn't what I'd call user-friendly, so I did things the old-fashioned way and rushed over to the departures board to find the gate for my flight.

In a rush, I located a flight ("a flight" is critical here) to New York-JFK departing from E11. I knew where I had to go -- or so I thought.

Many of the concourses at FCO are box-shaped, so I sprinted around corner after corner. Just as I thought I was taking one final escalator up to my gate, I saw I had to take a tram to yet another concourse to get to E11. The wait for the tram was only a minute and a half, but I didn't have many minutes to spare, so I was anxious. I figured I'd make it, though -- I still had about 10 minutes until the boarding doors would close.

The tram arrived at the station, and I burst out as soon as the doors opened, ran down the stairs and all the way to Gate E11 ... where I saw not Alitalia's green-and-white color scheme but the gray, red and blue of American Airlines.

In my panic, I hadn't checked the flight number or even the airline of the first flight to New York I saw on the departures board and sent myself to the wrong gate. I had just committed the cardinal sin of travel, one that I'd expect only the most inexperienced travelers to make.

"Idiot!" I thought to myself.

I darted over to the closest departures board I could find, double- and triple-checked my flight and saw that where I really needed to be was Gate E33. In the exact same place I'd just come from.

I sprinted back toward the tram, past all of the people I'd raced by just moments before, and back up the stairs to wait another 90 seconds for the tram that took me back to the place I'd just left in such a rush.

After another sprint down the stairs from the tram, I ran into yet another hurdle: security screening. I hadn't gone through security when I first landed at the airport, so I was unsure why I had to do it at this point. But, again, this was all the result of my carelessness, so I didn't ask questions and proceeded to take off my shoes, my belt, my jacket, the laptop out of my backpack and everything out of my pockets. At this point, I had just minutes before the doors were supposed to close, so I didn't even bother putting my jacket (I was sweating profusely by now) or my belt back on. I just grabbed everything and ran.

After zigging and zagging past the slower walkers and around many corners, I saw my shining beacon on a hill: Gate E33. Out of breath and dripping sweat, I arrived at the gate and practically flung all my belongings at the agents doing the secondary screening. With puzzled and slightly condescending expressions on their faces, they completed the screening and were happy to shoo me onto the plane.

Still out of breath and certainly still sweating, I made my way to Seat 2A, past most of the business-class cabin, where passengers were sipping glasses of prosecco and now also judging me for my disheveled appearance and labored breathing.

The boarding door shut moments after I sat down. I was the last person on the plane, and we were on our way.

"Due spritz, per favore."

I felt like I had earned a drink. Or two. And that I would never schedule so tight a connection again.

Related stories
Bask Bank raises the mileage earning rate on its AAdvantage savings account — what you need to know
Targeted Premier 1K members eligible for bonus miles when checking in and checking a bag on the United app
Current airline elite status match and challenge options you should know about
Business-class deals are back: This month’s Flying Blue promo awards
Featured image by (Photo by Nick Ellis / The Points Guy)