'The most advanced flying laboratory in the world': A Qantas 747's new life with Rolls-Royce

Articles
Alberto Riva Alberto runs our flight reviews and oversees special projects across several verticals. Previously, he was the managing editor of Vice News and worked at Bloomberg and CNN, where he was constantly trying to convince people to do more stories about airplanes. He speaks Italian, French and Spanish and one day he’ll be better at German.
Follow
Oct. 16, 2019
•
8 min read 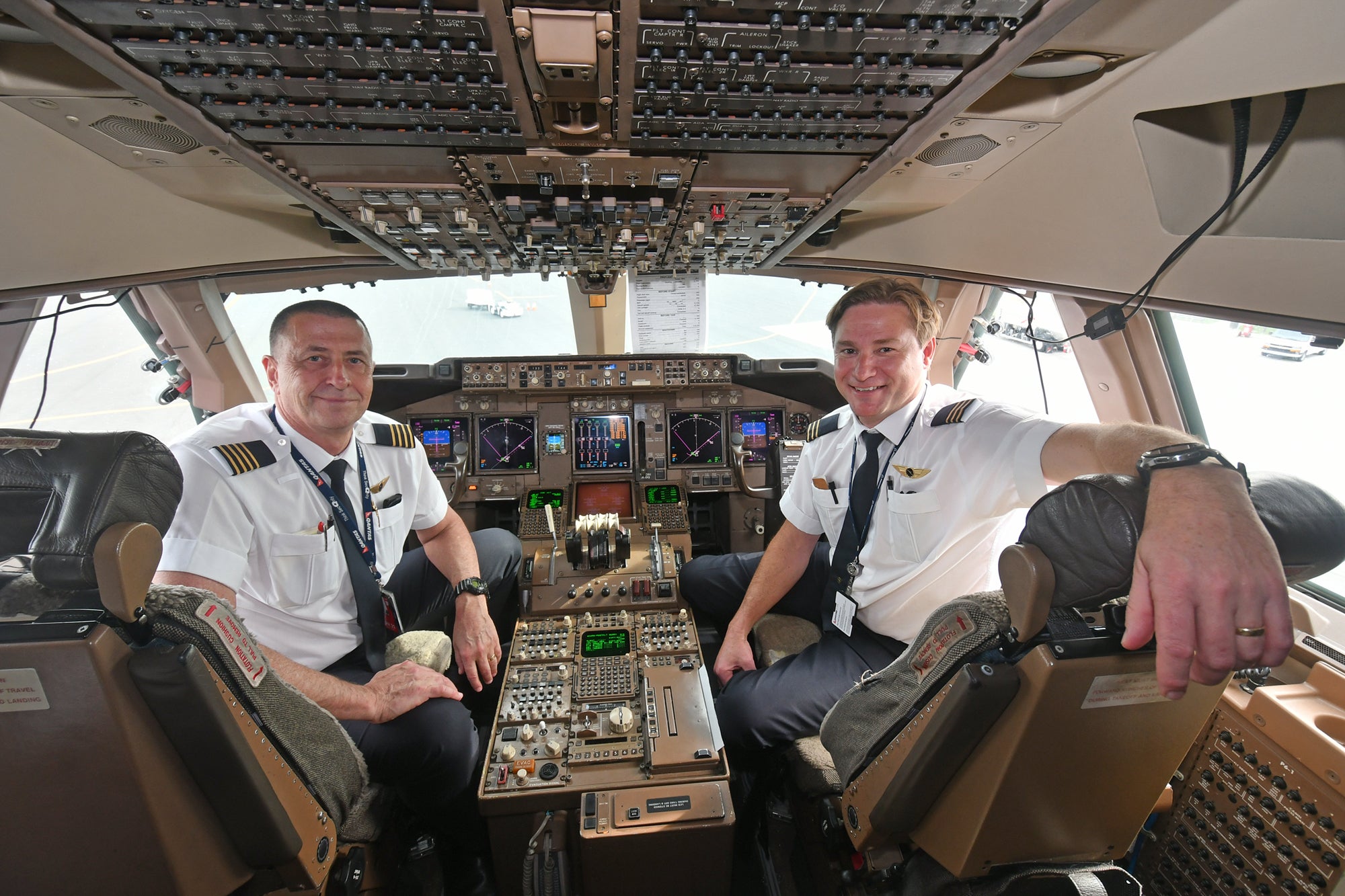 'The most advanced flying laboratory in the world': A Qantas 747's new life with Rolls-Royce
This post contains references to products from one or more of our advertisers. We may receive compensation when you click on links to those products. Terms apply to the offers listed on this page. For an explanation of our Advertising Policy, visit this page.

Most retired passenger jets go to storage facilities in the high desert of the western U.S., never to fly again. Eventually, or right away in some cases, they get scrapped. Only the very few that find a buyer who wants a cheap secondhand jet ever take to the skies again.

Even fewer — just a handful in the whole world — get to go on a new, adventurous life doing the coolest job an ex-airliner can have: they become flying engine testbeds. That's the airplane equivalent of retiring from a corporate career to start a consulting gig at the cutting edge of one's industry.

When a Qantas Airways Boeing 747 did just that this week, flying from its home in Australia to the northwestern U.S. to become a test platform for Rolls-Royce jet engines, we went along for the ride — a unique flight on Tuesday from Los Angeles International Airport to Moses Lake in eastern Washington state. That's a small city with a huge airport, where there's no commercial air traffic and plenty of space for aviation engineering company Aerotec to build a hangar for the giant airplane and transform it into a flying lab.

"The most advanced flying laboratory in the world," according to Aerotec president Lee Human, who spoke at a welcome ceremony after the plane landed in Moses Lake.

That's a pretty amazing twist in the life of a passenger plane delivered to Qantas in 2000. The aircraft has spent its 19 years of service ferrying passengers and cargo from Australia to Europe, North America and South Africa. Normal stuff for a long-haul jumbo jet. But in its new incarnation, the plane known by its given name of Lord Howe Island is going to do some really cool things, helping Rolls-Royce develop new jet engines.

Like, for example, taking off with five engines: its four normal ones, plus a smaller one for business jets mounted on the side of the upper deck. Or having an engine swapped out for a newly-designed one, creating a weird asymmetrical hybrid, since today's engines tend to have far bigger fans than previous models.

For a price of $70 million, including the aircraft itself and what it is paying Aerotec to modify the plane — a complex process that will last until 2021 — Rolls expects to get a platform that will take care of tough engine tests for the next 15 years. It's not run-of-the-mill flying: tests include simulated birdstrikes, icing, the loss of fan blades and behavior in heavy crosswinds.

Some of the cargo bays will be modified to install data-measuring equipment, said Rolls-Royce's Director of Development and Engineering, Gareth Hedicker, speaking at the Moses Lake airport as the plane sat nearby. Some of the current passenger seats will remain, but most of the cabin will be used to house test equipment.

Eventually "Lord Howe Island," a 747-400 model, will take the place of the current Rolls test plane, an older 747-200. It will likely be based in North America, where Rolls' engine division already has a large presence, and will be flown by a third-party operator, not Rolls-Royce itself.

But what about that flight from LAX to Moses Lake? (MWH is the airport code for the latter, though you won't see those three letters a lot. The airport has a fully functional terminal, but currently no airline service.) It was as glorious an experience as you could expect on a jumbo jet with 364 seats but just 22 people on board: members of the press and Qantas and Rolls reps, plus a small crew. Space on board was so plentiful and the atmosphere so relaxed that one could wish for a longer time in the air.

VH-OJU — the plane's tail-code identifier — had come two days earlier from Sydney, operating another unique flight as the "Qantas points plane," a one-off service for passengers redeeming points and miles. After resting in Los Angeles, the pilots took it up the West Coast to MWH on its last day as a Qantas bird, with flight number QF6021 — a special service not open for sale to passengers.

A flight with almost no one aboard, no cargo and fuel for a two-hour flight is an absolute treat in a 747, built to stay in the air more than seven times as long. So unburdened, "Lord Howe Island" took off in an amazingly short distance, little surprise considering it weighed under 220 metric tons but was designed for a maximum of 395. In imperial measurements, it took off 385,000 pounds lighter than it could — that is the equivalent of two fully loaded 737s!

With two captains, David Bracewell and Rob Nelson, a first officer and a second officer, QF6021 also had the rare distinction of having more crew members on the flight deck than in the cabin: there were only two flight attendants, led by customer service manager Sean McLaughlin.

Even with all that space and an amazing ratio of almost one flight attendant for every three passengers, it was easy to see why VH-OJU was going out of service. Besides having four engines, the reason that gas-guzzling Jumbos are going out of style in an age of twin-engined planes, its interiors are hopelessly dated today.

Qantas could refurbish its 747s with new cabins, like it is doing on its Airbus A380s. But that's expensive, and new 787s are coming into the fleet. So it's curtains for the Aussie Jumbos, and that's a sad thought for aviation enthusiasts who recall that Qantas was once renowned for flying only 747s. It has six left, and plans to phase them out by 2020 (a flight attendant on QF6021, as enamored of the Queen of the Skies as the passenger she was chatting with, said she hoped for an extension.)

But the four engines that spelled the 747's doom as a passenger carrier are a great asset for a testbed plane. The other two big jet-engine makers, General Electric and Pratt & Whitney, also use 747s dismissed by airlines to test their new designs. If one engine goes out, a 747 with three left can still fly just fine, but a twin would need to land as soon as possible.

"We want a reliable airplane that can hit the highest possible altitude and speed, and with four engines so we can operate safely with three," said Rolls-Royce's Hedicker. "We want to test the engine, not the aircraft."

TPG pays for all of its staff travel and does not accept free passage from airlines or any other transport companies, or free stays from hotels. Flights not available for sale to the general public, like airplane deliveries or special flights, are an exception to this policy.