Articles
Ben Mutzabaugh is the senior aviation editor and heads TPG’s airline coverage. Ben joined TPG in March 2019 after nearly 19 years at USA Today, where he launched the long-running, industry-leading Today in the Sky blog in 2002.
Follow
Oct. 18, 2019
•
4 min read 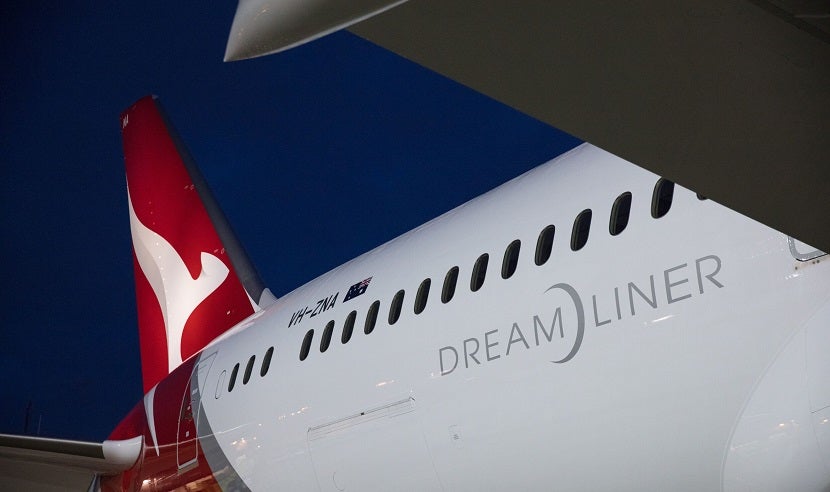 Qantas' New York-Sydney nonstop on Friday will (briefly) be world's longest
This post contains references to products from one or more of our advertisers. We may receive compensation when you click on links to those products. Terms apply to the offers listed on this page. For an explanation of our Advertising Policy, visit this page.

When Qantas Airways Flight 7879 takes off tonight from New York JFK, it will displace Singapore Airlines’ Flight 21 from Singapore to Newark as the longest airline route in the world.

But the title change for the “world’s longest flight” will be short-lived.

QF7879 is scheduled to depart JFK around 9 p.m. for a nonstop flight to Sydney, where it will arrive around 7 a.m. local time on Sunday morning. Total flight time: about 19.5 hours. Qantas puts the distance of the flight at about 10,000 miles.

It’s the first time an airline has ever flown nonstop from New York to Sydney, says Qantas.

The airline shared the flight plan for QF7879, showing the route going initially from New York to Southern California over the middle of the country, then over the Pacific Ocean south of Hawaii and then south to Sydney. (The three-letter and four-letter codes in the flight-plan maps are airports, and the five-letter codes are waypoints, as are the geographic coordinates that appear over the ocean along the route.)

But Friday’s New York-Sydney flight will not become a regular occurrence, at least not yet. Qantas will operate this flight and one other on the route by the end of the year.

It’s all part of what Qantas is billing as “Project Sunrise,” an effort that also will include a third ultra long-haul flight that will fly nonstop to Sydney from London.

Qantas is billing Project Sunrise as a research effort that’s meant to study the effects of extreme long-haul flying on both passengers and crew.

However, the effort also comes as Qantas is pushing Airbus and Boeing, the world’s two biggest jetmakers, to develop an aircraft that can fly those routes with a full load of passengers and cargo.

Currently, no commercial passenger aircraft is capable to doing so.

So, how is Qantas flying Friday’s flight?

The carrier is using a Boeing 787-9 that it’s just taken delivery of. But instead of flying it to Australia directly from Boeing's assembly line near Seattle to Australia, the plane will detour through New York so that it can complete Flight 7879.

The aircraft can’t make the trip with a full complement of passengers and cargo, but it can if it’s not fully loaded — and that’s just what Qantas is doing.

Only about 50 people, including both passengers and crew, will be on the flight. That count includes a half-dozen Qantas frequent-fliers that the airline contacted with an offer for a seat on the flight. Most already had plans to be in New York, so the invite to the Project Sunrise flight offered them an unexpected nonstop ride back to Australia.

Beyond that, the flight will include airline officials and researchers who really are studying the effects of the flight. Qantas’ frequent-fliers have been keeping sleep journals and will be monitored by the sleep scientists during and after the flight. Crews also will participate. Pilots, for example, will wear EEG (electroencephalogram) monitors that will track brainwaves and alertness.

Qantas promises to share the results as part of a way to tailor its offerings on ultra-long flights.

But whether that will eventually include routes like Sydney-New York remains to be seen.

Qantas expects to decide by year’s end about whether to press ahead with plans to add nonstops to London and New York from Australia’s east coast cities of Sydney, Melbourne and Brisbane.

Much of that likely will hinge on whether Airbus and Boeing can deliver aircraft updates that satisfy Qantas’ desire to launch the ultra-long routes. Qantas would also have to secure regulatory approval and crew contracts that would allow pilots and cabin crew to work flights that could top 20 hours.

The carrier says it’s considering Airbus’s A350 and Boeing’s new 777X as candidates for the routes. It would likely take until 2022 or 2023 before aircraft could be ready to begin regular flights on those Project Sunrise routes.

For now, though, Friday’s Flight 7879 will offer a glimpse of what might come.

TPG will be on the flight and will have a full report Sunday after landing in Australia. Be sure to check back to see what it was like on the marathon flight.