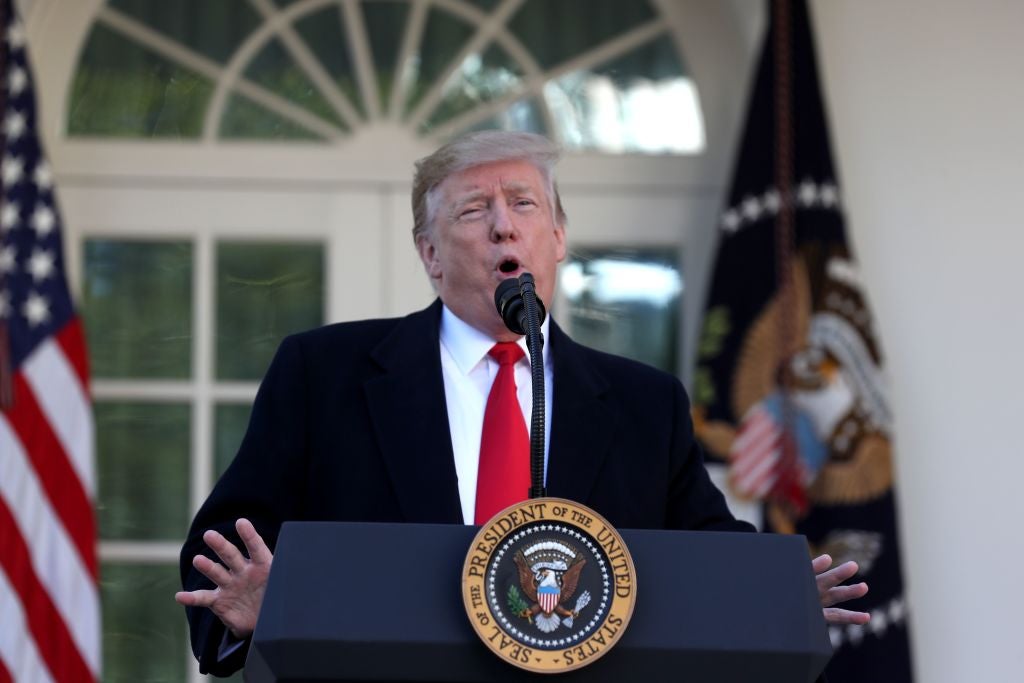 President Trump Temporarily Ends Shutdown After Widespread Flight Delays
This post contains references to products from one or more of our advertisers. We may receive compensation when you click on links to those products. Terms apply to the offers listed on this page. For an explanation of our Advertising Policy, visit this page.

US President Donald Trump said in a speech Friday afternoon that he would sign a bill to reopen the federal government for three weeks until Feb. 15.

The announcement follows widespread flight delays due to lack of air traffic controllers at New York's LaGuardia Airport and other airports on the East Coast. The Federal Aviation Administration said that due to an uptick in sick callouts by air traffic controllers — who are unpaid during the shutdown — the organization had to take steps to slow air traffic across the US.

The short-staffing had initially caused a ground stop on Friday, meaning no flights into or out of LaGuardia Airport were taking off. Flights were being held at their airport of origin to mitigate traffic. The ground stop was cancelled later in the morning, as the FAA began metering traffic, or delaying the pace of takeoffs and landings.

According to tracking site Flight Aware, at least 267 flights out of LGA were delayed by Friday afternoon, about 44% of its total flights that day, with passengers at some points waiting longer than an hour on the plane to take off. In-bound flight delays were even lengthier, with flights delayed at their airport of origin an average of 1 hour 26 minutes, and arrival delays for airborne aircraft averaging 1 hour 6 minutes.

There were also delays Friday morning at other East Coast airports, including Newark (EWR), Philadelphia (PHL) and Washington DC (DCA), averaging about a half hour to 45 minutes.

White House officials say that the widespread air traffic control delays played an important role in President Trump's decision to at least temporarily reopen the government. “Planes have to keep flying. This is getting worse and worse,” the White House official told CNN. “He knows this has to end.”

In his speech Friday in the White House Rose Garden, President Trump thanked federal workers who had gone unpaid during the shutdown, calling them "fantastic people" and "incredible patriots." He also promised that they would get their back pay "as soon as possible." Air traffic controllers and TSA screeners were among the 800,000 federal employees who missed two paychecks during the shutdown. Both groups said the shutdown interfered with their abilities to do their jobs.

"Many controllers have reached the breaking point of exhaustion, stress, and worry caused by this shutdown," the union president of the National Air Traffic Control Association, Paul Rinaldi, said in a statement earlier on Friday. "Each hour that goes by that the shutdown continues makes the situation worse."

President Trump said he was prepared to shut down the government again if Congress does not fund his border wall come Feb. 15.

"If we don't get a fair deal from Congress, the government will either shut down on February 15, again," Trump said, "or I will use the powers afforded to me under the laws and the Constitution of the United States to address this emergency."

Our points-obsessed staff uses a plethora of credit cards on a daily basis. If anyone on our team wouldn’t recommend it to a friend or a family member, we wouldn’t recommend it on The Points Guy either. Our opinions are our own, and have not been reviewed, approved, or endorsed by our advertising partners.
See all best card offers
Related stories
Guide
How to use the Chase Sapphire Reserve $300 annual travel credit to save on travel
Guide
Cruise payment plans: All you need to know about paying for a cruise
News
There's a new $13 way to get from midtown Manhattan to JFK
News
Don't expect cheap hotel rates this summer, Marriott CEO says