Miss the Concorde? These Companies Want to Fix That 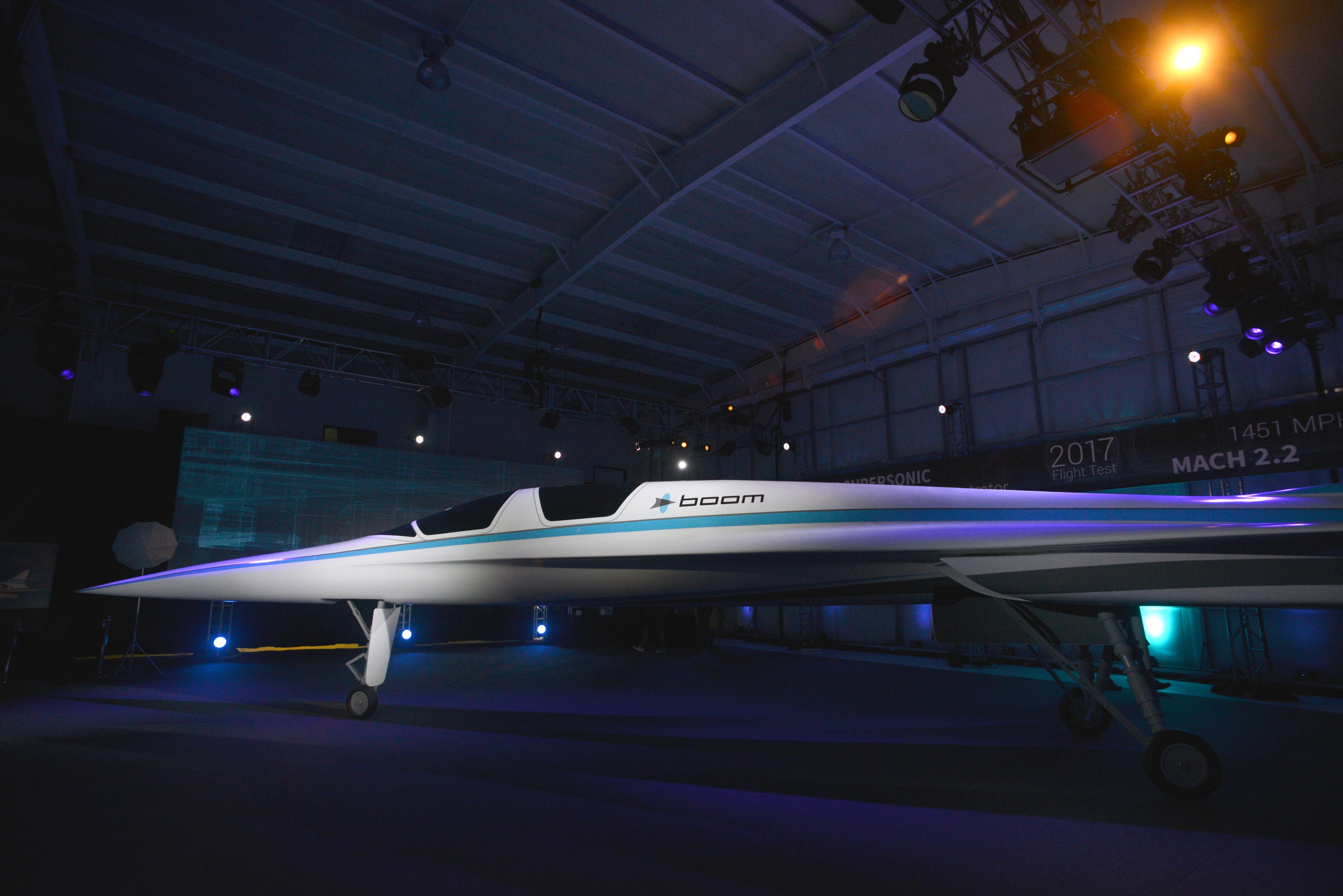 When it comes to flying, money can buy you unparalleled levels of comfort and convenience, but even the deepest pockets can’t be of much help if you want to fly significantly faster than the average traveller.

Etihad's The Residence, or the new first class suites on Emirates, or Delta One suites. Private jets, or even private jumbo jets. If you want to fly in style, you have many choices — but they all have the same limitation: speed. Even when you're flying The Residence on an Airbus A380, you'll arrive at exactly the same time as the coach-class passengers in row 83.

Everybody these days flies below the speed of sound. Ever since the iconic Concorde was withdrawn from service in 2003, your best chance to fly supersonic has been to join the military. And even they don't fly their warplanes at supersonic speeds over inhabited areas, for the simple reason that it would create sonic booms.

The explosion-like sound that is produced whenever an aircraft crosses the sound barrier remains a formidable obstacle, and is the reason commercial supersonic flight over land is prohibited in the United States.

And noise is hardly the only obstacle.

The deadly crash that put an end to the Concorde era was but the last straw for an aircraft that never managed to consistently make money for its operators. In fact, the supersonic Franco-British airliner ended up being a financial liability, if a truly glamorous one. But despite decades of strong air traffic growth, the aviation industry has not exactly rushed to come up with a viable successor to the Concorde. At least until now.

Several startups claim to be on the cusp of launching a new-generation civilian supersonic aircraft. The catch is that none of them is going to carry as many passengers as the Concorde, which had 100 seats. (Its similarly-sized Soviet equivalent, the Tupolev Tu-144, had a very short-lived flying career and never served outside the USSR.)

But it's far from certain that any of them will fly, or will be profitable if they do. Who are the contenders in this new supersonic race?

Aerion, based in Reno, Nevada, has been working on supersonic flight since 2003 and has managed to enlist some industry heavyweights, such as Lockheed Martin, General Electric and Honeywell.

A key step towards fulfilling this ambitious calendar was accomplished last October, when “Affinity”, the engine that will power the AS2, was unveiled. Developed by GE, it's the first civilian supersonic jet engine unveiled in the last 55 years.

Focusing on the executive jet market makes sense, since time is easily the most valuable asset of business travelers and one that many may be ready to pay for. If the AS2 is successful, a larger airliner may follow.

So far, the AS2 has garnered an order for 20 from fractional jet operator Flexjet.

This Colorado-based startup, founded in 2014, has set itself the rather ambitious challenge of offering travel at more than twice the speed of sound at prices comparable to today’s subsonic business class.

Boom’s three-engined 55-seat airliner would be capable of Mach 2.2, while cruising as high as 60,000ft. It will have a range of 5,200 miles. Boom claims that a 30% efficiency improvement would have made the Concorde profitable. With its clean-sheet design and making use of advanced materials, Boom wants to do just that. For example, a transatlantic round-trip could theoretically be priced at around $5,000, way less than the $20,000 that flying on the Concorde could cost — at least according to the company.

At the moment Boom is working on a small-scale demonstrator, called XB-1, in order to test the concept.

The firm has the backing of Japan Airlines, Richard Branson and several prominent technology investors, as well as of Chinese travel operator CTrip.

Spike Aerospace, based in Boston, is designing the S-512 supersonic jet to carry up to 18 passengers at speeds of Mach 1.6 and a range of more than 7,000 miles.

A first unmanned demonstrator flight at subsonic speed took place in October 2017. The company says it will fly the actual supersonic aircraft by 2021.

Customer deliveries would begin in 2023.

Russian aerospace companies have also expressed in several occasions their interest in entering the commercial supersonic race. Early attempts in the 1990s to design a supersonic business jet, in partnership with Gulfstream, did not materialize.

At the 2013 MAKS air show in Moscow, Russian aircraft maker Sukhoi piqued the curiosity of the public with a scale model of a Sukhoi Supersonic Business Jet (SSBJ), theoretically capable of Mach 2.

Then, earlier this year, Russian media reported that Tupolev (which, like Sukhoi, is also part of government-owned United Aircraft Corporation) was also working on its own commercial supersonic aircraft.

This is not the first civilian supersonic project for Tupolev. Back in Soviet times it developed the Tu-144, the Soviet answer to the Concorde. But, plagued by technical issues and serious incidents, it was withdrawn from active passenger service shortly after its launch.

But if Tupolev revisits the supersonic airliner, it may not be the Tu-144, but another rather different aircraft that it turns to for inspiration. The Tu-160, a strategic bomber capable of Mach 2 that regularly pokes at NATO’s air defences, may be the basis of the new Russian supersonic airliner. Even Vladimir Putin likes that idea.

Although little is known of this project, reports in the Russian media have indicated it may be able to carry some 30 passengers at speeds of Mach 1.4 to 1.8.

Boeing is also working on faster commercial aircraft, but the American giant may skip the mere supersonic phase altogether and get straight into hypersonics.

In June, Boeing unveiled a concept aircraft that would be able to carry between 20 and 100 passengers and achieve speeds of up to Mach 5.0 thanks to its ramjet technology. This hypersonic aircraft may still be at least two decades into the future, though.

But how do all these projects deal with the sonic boom?

Although all of these companies say they can make money even if the US overland supersonic ban remains in place, lots of research is going into ways to mitigate the effects of the sonic boom. Even NASA has joined in the effort.

Aerion is working on a way to greatly reduce the sonic footprint under certain circumstances for speeds of up to Mach 1.2, while Boom claims it will be as much as 30 times quieter than the Concorde and Spike will rely in its own patent-pending technology.

Ultimately, the hope of the whole civilian supersonic industry is that, by proving that noise reduction is real, the ban would be lifted or relaxed.

Some industry experts remain skeptical about how these ambitious new entrants are going to manage the many challenges involved in making supersonic flight technologically work. It requires re-building a lot of knowledge through research and full-scale test which is financially demanding. Perhaps biggest challenge is how to source an engine which is efficient at the high cruise speeds of supersonic flight and at the same time compliant with the more stringent noise regulations we have today.

“The aerodynamics of supersonic flight are quite different from those of subsonic flight," said Bjorn Fehrm, an aviation consultant that has authored of a thorough 14-part review of civilian supersonic jet technology. "As soon as you cross the sound barrier, a number of physical effects come into play that make designing efficient aircraft a lot more challenging, and these issues become more complex the faster you intend to fly. It is really difficult to combine high-speed engine efficiency with low takeoff and landing noise."

There is no certainty that any these projects will come to fruition. But supersonic flight has the potential to be a game changer: it might become a must-have for any airline that wants to stay on top of the game. That's pretty much what happened in the late 1950s when the first viable long-haul jet airliners were introduced, and changed the commercial aviation landscape forever. On the other hand, the Concorde was a commercial flop. But that could be changed if its main problems, the noise and limited range, were solved by a new supersonic jet.