More shopping, less sunbathing: Here's what it's like on the first Majestic Princess cruise from California

Articles
Ashley Kosciolek has spent more than a decade writing about travel, with particular emphasis on cruises. Her favorite cities include London; Amsterdam; Krakow, Poland; Phnom Penh, Cambodia; Dawson City, Yukon; and anywhere known for outstanding pizza and theater. You can follow her daily exploits, both at sea and on land, on Instagram or Twitter @slyjabroni.
Follow
Oct. 08, 2021
•
9 min read 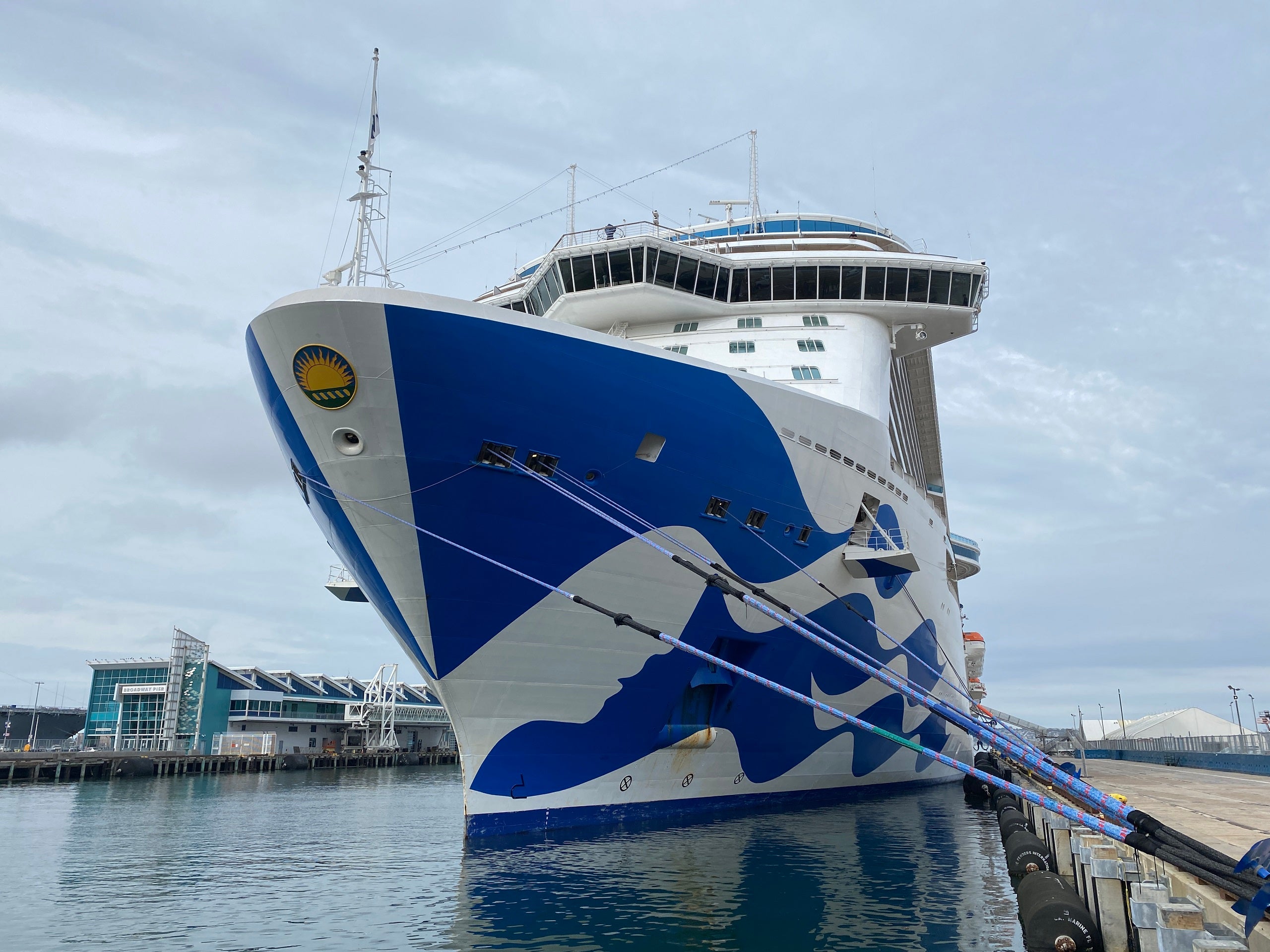 Editor’s note: Princess Cruises provided a complimentary cruise for TPG to experience Majestic Princess. The cruise line paid for all travel to and from the cruise ship. The opinions expressed below are entirely from the author and weren’t subject to review by Princess or any external entity.

Majestic Princess, which debuted in Shanghai in 2017 before moving to Australia, was specifically designed for the Chinese market, but with China and Australia not yet open for cruising, Princess Cruises has relocated the vessel to the U.S. West Coast -- a region that's largely underserved by newer ships.

After a short season of Alaska sailings from Seattle, Majestic Princess has relocated to its new San Pedro homeport in Los Angeles, from which it will offer a series of California Coastal and Mexican Riviera itineraries that include ports such as San Diego, San Francisco and Ensenada (to satisfy the Passenger Vessel Services Act).

"Majestic Princess ... is a symbol of our return to our new normal, where we can, once again, offer healthy, safe vacations to our guests," said Jan Swartz, president of Princess Cruises.

"Princess ships' origin was sailing from the West Coast, and so we have always had a great fondness ... Alaska offers a unique summer experience for our guests, and then, of course, [there's] the beautiful ... Mexican Riviera and California Coastals [to] help fill out the year. We could not be more pleased to be returning to service."

I'm on the ship's first cruise from California. Here's what's happening on board.

This first California sailing of Majestic Princess from Los Angeles is at about 39% capacity. The ship can carry more than 3,500 passengers; there are roughly 1,400 on board. Of the usual 1,346 crew, we're told approximately 1,200 are on board.

Food has been just average in most places, with standouts being the Crown Grill steakhouse and Harmony Asian eatery (more below). The most disappointing, by far, is the ship's World Fresh Marketplace buffet. A large section of it is closed (likely due to the reduced capacity and the extra crew needed to serve the food at each station), and although there are still many tasty items from which to choose, a lot of the food simply missed the mark: dry, tasteless hashbrowns and rock-hard English muffin sandwiches at breakfast, vegetables with rotten spots at lunch and dry cupcakes at the dessert station.

Service has been excellent and friendly, with only a couple of minor issues, such as lag times between ordering and the delivery of our first course at dinner, and 45-minute waits for drinks ordered through the line's OceanMedallion app, which is designed to make the onboard experience more seamless. (Some of the features are wonky for sure -- so far, I haven't been able to get the food ordering bit to work — but I'm obsessed with my medallion's ability to automatically unlock my cabin door as I approach.)

In order to accommodate the OceanMedallion functionality, Princess has invested in what they claim is the fastest Wi-Fi at sea. After testing it out, I agree. I purchased a cruise-long package that set me back $75 for up to four devices. (One device for the entire cruise was less, but I wish there were an in-between option, as I've only used two of the allotted four under the package I chose.) I was able to upload 26 photos to Dropbox in two minutes flat. (Yes, I timed it.)

I'm booked in a minisuite for this sailing, which is basically a balcony stateroom with some extra square footage and a second television. I'm loving the added space, the views and the walk-in closet (although it has no door, which is a bit strange). The shower also has a tub, so it's a much more pleasant experience, despite the fact that there's still a clingy curtain.

Overall, the ship is gorgeous, but while it still looks brand-new in most spaces, there are some odd instances of wear and tear that surprised me. I spotted signs missing key letters, broken lighting pillars on an outer deck and rust in places on the hull where it seems like there should only be fresh paint.

Since the cruise industry restarted for Americans, I've sailed with six different cruise lines, and Princess' onboard protocols are fairly standard, compared with what I've seen across the board so far.

Masks are required in all terminal areas, as well as on board in indoor public areas (think: bars and lounges, the theater, the casino and elevators). You can take them off outdoors or while eating or drinking. They're also not required in the spa's thermal suite or in the fitness center if you're actively doing cardio.

Throughout the ship, there's signage reminding people about social distancing, and certain seats are blocked off in the theater, but I haven't seen any of it widely enforced. However, there are crew members stationed at the entrance to the buffet -- currently served by crew, except for individually plated grab-and-go items -- to make sure passengers wash their hands before they enter.

Some venues (mainly bars) have QR codes for menu access, but so far, I've been handed physical menus in all of the restaurants I've been to: Alfredo's pizzeria, Bistro Sur la Mer, the Crown Grill steakhouse and Asian eatery Harmony.

There are no bubble excursions required on this sailing, but masks are required when in all port terminals and when on transportation, whether it's public or via a tour.

As an extra layer of precaution, Princess' OceanMedallions can be used for contact tracing in the event someone does test positive while on board. The technology allows ship officials and onboard medical staff to determine who was near you and for how long to see who else might need to be quarantined and tested.

As for Majestic Princess' Asian influences, some -- like the dedicated karaoke lounge -- have been removed, but many remain. The most immediately noticeable difference is the signage throughout the vessel, which is in both Chinese and English. You'll see it in elevators, and on deck plans and signs for the kids clubs.

Where Sabatini's Italian restaurant is on other Princess ships, there's an Asian restaurant called Harmony. It's one of the best meals I had during the sailing so far. The menu, which used to include items like spicy marinated chilled jellyfish; sliced beef tendon in soy sauce; and lots of tofu, duck and seafood, now features more Americanized options like crab rangoons and General Tso's chicken. (Try the mango soup for dessert. Trust me.)

Instead of a jazz club, Majestic Princess boasts two casinos, but the smaller of the two seems as if it's being phased out -- likely to make room for the line's new sports betting options. Additionally, there are several upscale shopping boutiques, including Coach, Cartier and Bulgari.

In lieu of The Sanctuary -- an added-fee adults-only sun deck that's a staple on ships in the rest of the Princess fleet -- Majestic Princess has the shaded Hollywood Conservatory, an adults-only observation lounge at the front of the ship with comfy alcoves for gathering and relaxing. There are also fun faux topiaries, a giant chess set and several large xylophones with which passengers can tinker.

"In terms of our global feet deployment, we anticipate that, in time, other markets will continue to open up -- like Australia, like Asia ..." Swartz said when asked if the ship will go back to Asia when the market is ready. "We do believe that by 2022 and 2023, Princess will, once again, be sailing to all seven continents."

In the meantime, through 2023, Majestic Princess will spend its winters sailing to California and Mexico from Los Angeles and its summers cruising to Alaska from Seattle.

Featured image by Princess Cruises' Majestic Princess docked in Los Angeles' San Pedro port. (Photo by Ashley Kosciolek/The Points Guy)
Editorial disclaimer: Opinions expressed here are the author’s alone, not those of any bank, credit card issuer, airline or hotel chain, and have not been reviewed, approved or otherwise endorsed by any of these entities.