7 locations you can visit from the 'Downton Abbey' film 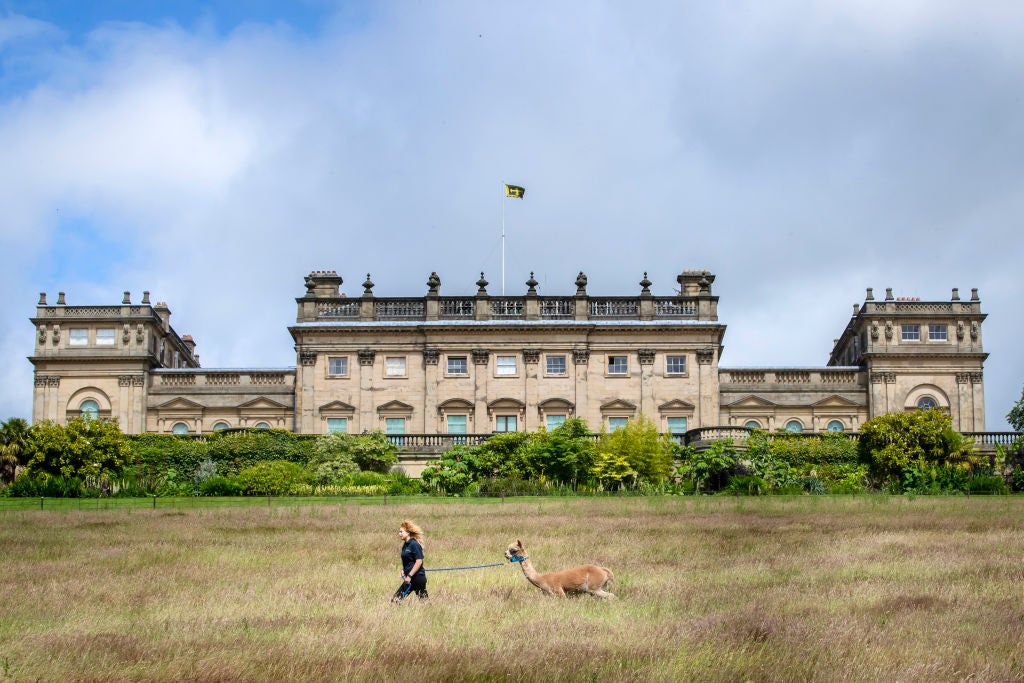 It’s been three years since "Downton Abbey" left our TV screens — oh, how we’ve missed the drama of the Crawley family and the intriguing antics of the staff. But the feature film was worth the wait, as we’re absolutely swooning over the stunning filming locations.

Without giving away any spoilers, the film is set in breathtakingly beautiful areas around the country as the main storyline is about a royal visit to the Crawley household, which creator Julian Fellowes based off the real-life tour of England by King George V and Queen Mary. Here’s your guide to "Downton Abbey" locations from the new film you can actually visit.

Looking better than ever on the big screen, the now-iconic home that plays Downton Abbey is Highclere Castle. Located in the Hampshire countryside 70 miles outside London, Highclere is actually home to the Earl and Countess of Carnarvon, whose family has lived there since 1679.

Exterior shots of the house and most of the interior activity was filmed at Highclere in both the film and TV series. The estate is open to visitors during the summer months, around Christmas, Easter, bank holidays and for various events throughout the year. Visitors can see the grand saloon, library and some of the upstairs bedrooms, as well as the grounds designed by famed landscape architect Capability Brown. Best to book well in advance to avoid disappointment, as many dates sell out.

Getting there: Highclere is an easy drive, just off the M4. There is also train service from London Paddington to Newbury (NBY) or Waterloo to Andover (ADV) on National Rail. Taxis can be found outside the stations and take 15-20 minutes.

Harewood sits just outside of Leeds in the heart of Yorkshire. Built in the 18th Century, the imposing house has acres of exquisite gardens and an art collection to rival the finest in Britain. In 1927, when the film is set, Harewood House was home to Princess Mary and her husband Henry Lascelles, 6th Earl of Harewood.

Harewood is open to visitors year-round with a full calendar of music, art and special events. In addition to seeing the state rooms and grounds seen in the film, visitors can enjoy exhibitions of contemporary art, a rare bird garden, farm experience and adventure playground for kids.

Getting there: The nearest railway stations to Harewood House are in Leeds (LDS) and Harrogate (HGT), served by National Rail from Kings Cross in London, or regionally on Northern Railway. Taxis take about 15 minutes from either station, or bus connections are available. It's also easy to reach by car, as Harewood is centrally placed in Yorkshire at the junction of the A61/A659 on the Leeds/Harrogate Road.

Famous for having the longest facade of any stately home in the UK, Wentworth Woodhouse is used in the film for its magnificent ballroom, creating the setting for the ball during the Royal visit. Located in west Yorkshire about 10 miles from Sheffield, the house was built in the 1700s for the 1st Marquess of Rockingham and then passed to the Fitzwilliam family. Since, it's had various uses from Military Intelligence in WWII to a polytechnic college. Now, it's part of SAVE Britain’s Heritage and belongs to the Wentworth Woodhouse Preservation Trust, which is working to return the home to its former grandeur.

The only way to visit is to pre-book one of the tours. Choose from the house, gardens and even a special roof tour using the scaffolding set up for the exterior repairs. National Trust Members are entitled to a 50% discount.

Getting there: Wentworth village is accessible by a combination of train and bus from stations at Sheffield (SHF), Rotherham (RMC), Barnsley (BNY) and Doncaster (DON), all with taxis as well. Visit Travel South Yorkshire to plan your journey. Once in the village, the walk to the house is about a quarter of a mile. Driving is easy, as Wentworth is about 10 minutes off the M1.

This Wiltshire village hasn't changed much in 200 years. That made Lacock the ideal setting for one of the film’s most memorable scenes: a parade featuring the king’s inspection of the Yorkshire Hussars, a British Army unit. The village is actually owned and maintained by the National Trust, which keeps it looking exactly like it did in the 1800s. Lacock Abbey is worth visiting, as it is one of the few remaining abbeys in England not destroyed during the reign of Henry VIII, and incidentally, was used as a film location for "Harry Potter".

Getting there: Lacock is slightly remote and easiest to visit by car, located just off the M4. Alternatively, you can travel by train from London Paddington to Chippenham (CPM) on Great Western Railway and then take a bus to the village of Lacock.

Featured regularly in the TV series, Bampton reprises its village role in the film for various scenes. Fans of the TV show will recognize this picturesque Cotswolds village, which has been the setting for many dramatic moments including Lady Edith's jilting at the altar in the third series at St. Mary's church.

Getting there: A pretty drive through the Cotswolds, Bampton is easiest reached by car and accessed just off the A40. By train, there are a choice of several stations within 30 minutes by taxi via Great Western Railway.

Beamish is an open-air museum that tells the story of life in Northeast England over time through a series of different period sights — an 1820s village, a 1900s town, a 1900s coal mine, a 1940s farm, railway station and tramway — all with actors in appropriate dress from the various eras. In the film, various parts of Beamish were used as the setting for shopping scenes with Downton family cook, Mrs. Patmore. This engaging museum is open daily with special events around the holidays and lots of activities for families.

Getting there: Beamish is less than 10 minutes off the M1 in County Durham. The closest train station to Beamish Museum is Chester-le-Street. TransPennine Express runs regular direct train services to Chester-Le-Street from Newcastle, Durham and Darlington. Once you arrive at Chester-le-Street, there are regular bus services from the town centre to Beamish Museum, which take 15–20 minutes.

The opening scenes of the film set the 1920s mood with vintage trains, chugging and steaming. This is all done along the real-life North Yorkshire Moors Railway heritage line and in the stunning North York Moors National Park. Visitors can take return journeys along the full 18-mile heritage line from Pickering to Whitby, taking an hour and 45 minutes. Prices start at £25 ($31) per adult or splurge on one of the special afternoon tea or holiday experiences. Pickering Station stands in for London's Kings Cross in a later scene in the film.

Getting there: Ironically, the best way to arrive is by car. Pickering Station is just off the A170 between Scarborough and Thirsk and lies just off the A169, 9 miles from Malton and the A64.