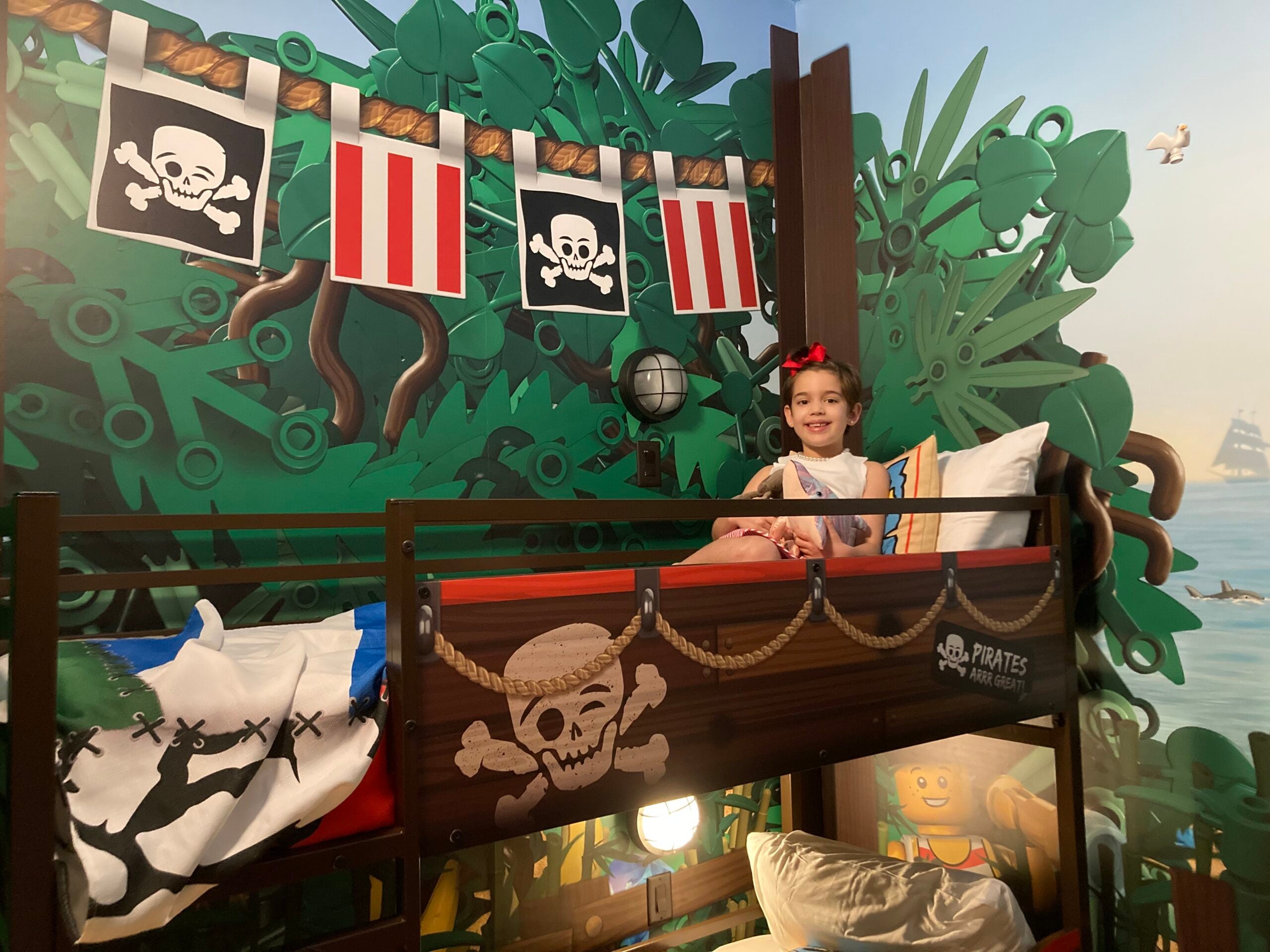 Editor's note: Legoland Florida provided complimentary accommodations to TPG as part of a media event, but all opinions expressed below are the author's.

As a Florida resident with a six-year-old daughter, I've visited many of Central Florida's theme parks. However, I've never sprung for a hotel stay at an on-property option — instead preferring a longer commute as a trade-off for more spacious (and affordable) accommodations.

However, I recently had the opportunity to change this trend during a visit to Pirate Island Hotel, the newest lodging option at Legoland Florida. The property opened in the middle of the coronavirus pandemic (June 1, 2020), and during a recent media event to celebrate the launch of a new water stunt show, I spent a night just steps from the entrance to the park.

And I now see the notable appeal of staying so close to all the fun.

Here are the five things to know about this new hotel if you're considering your own visit.

You can't beat the convenience

It's no surprise that Pirate Island Hotel is a great option for visiting Legoland, as the property is situated just outside the main entrance. I even put the claim that it's just 130 steps to the park to the test — and I counted 129 steps from the front door to the turnstiles.

This easy commute is facilitated by the separate walkway for hotel guests with a dedicated metal detector — which can be nice to avoid the security for non-hotel guests arriving from the parking lot. While there was a short wait right at 10 a.m. as the park opened, we managed to get through relatively quickly.

Parking is also included at no charge for hotel guests (normally $23/day for park visitors) — and it's covered too, which should ensure that your car isn't too over-heated upon departure.

Note that Pirate Island Hotel is physically located in the same building as Legoland Hotel, and they share a check-in area. After getting your room key, simply head back toward the main entrance, and you'll see the wing devoted to Pirate Island on your right.

It's not all about the park

While it's true that the location of the hotel was ideal for visiting Legoland, there were plenty of other ways to stay busy on property. For my Lego-loving daughter, a real highlight was the master builder workshop she attended. These are free for registered guests and are offered daily at 2:30, 3:30, 5:30, 6:30 and 7:30, but they can only be booked after arriving at the resort — and can quickly fill up, especially the 5:30 one (the park closes at 5 p.m.).

I was initially a bit concerned about the popularity of these workshops and the potential for crowds that weren't socially-distanced, but I was pleased to see that tables were spaced far apart to keep parties separated. It took about 20 minutes, but my daughter was thrilled with her flower box and watering can — which was hers to keep (including printed instructions for recreating it in the future).

There was also nightly entertainment in the Pirate Island Play Area, which included bingo and storytime, but the start times didn't fit our schedule.

Guests can also enjoy the heated pool and large water slide (we forgot our bathing suits, so weren't able to check it out), and there were several common areas with Legos for building — though we weren't comfortable due to COVID-19 and bypassed those.

Finally, there's a nine-hole mini-golf course ($8 per person) as well as a nice boardwalk along the edge of Lake Elouise.

This area also includes picnic tables and a fire pit for making s'mores at night.

There's nothing "standard" about the standard rooms

Whenever I travel with my family, I like having a separate area for my daughter in our accommodations — be it a separate bedroom or living area with a pullout sofa. It's one of the main reasons we've shifted a lot of our lodging choices to vacation rentals over the last several years. Paying hundreds of dollars a night for a standard hotel room where she's right on top of us isn't my idea of a relaxing getaway.

If you feel the same way, you'll love the layout of the rooms at Pirate Island Hotel. While not massive in size, they do provide a separate area with bunk beds and even a separate trundle bed to accommodate a third child.

There's no door between the kids' area and the main bed, so it's not a true suite — but it does offer some much-needed separation.

In addition, the kid area features its own television and collection of Legos for kids to play with (we sprayed these down with Lysol prior to letting our daughter go to town).

The decor is (naturally) geared toward youngsters, but even the adults will marvel at the Lego creations that adorn the walls.

The kid-friendly touches are fantastic

Beyond the separate sleeping area, the room also provided an array of kid-friendly features — ones that clearly showed just how much thought went into making these rooms as appealing to families as possible.

For example, the bathroom featured a toddler toilet seat seamlessly integrated into the lid ...

... along with a step stool for kids to easily reach the sink.

The room also featured a pair of Alexa speakers and even gave some suggested prompts for kids, including:

(Sidebar: I totally asked the last question, and here's what Alexa had to say: "Where do pirates send their taxes?" "The I, Arrrrrr, S." I laughed. Like, a lot.)

But the most creative, kid-friendly feature was the in-room treasure hunt — also facilitated by Alexa.

Alexa guided my daughter to find answers to these four questions around the room, and it confirmed when she had the correct one. Then, when she put the numbers into the combination lock on the door of the safe, it opened to display an array of "treasure" — including juice boxes, eye patches, a pair of Lego characters from the movie franchise and a book.

It was such a fun, creative way for her to engage with the room amenities and take home some nice souvenirs.

When I first read about the hotel's "family-style" breakfast and dinner options, the skeptic in me immediately thought that was a fancy way of saying "buffet" — and I'm generally not a fan of buffets, especially during a worldwide pandemic.

However, I was pleasantly surprised to learn that "family-style" meant entire skillets served directly to your table, providing all-you-can-eat dining without the shared utensils and serving areas of a buffet line.

And the food itself was quite tasty.

Dinner costs $28 per adult and $13 for children, and it includes bread and butter, a mixed-green salad, an entree platter (with sides) and a dessert. We opted for the "Pirate Platter" — which included a combination of brisket, pulled pork, spare ribs, smoked sausage, baked beans and a trio of sauces. It was also served with mashed potatoes, macaroni and cheese, and roasted vegetables.

Needless to say, our family of three was fine with just one portion, though we could've asked for more at any time.

Dessert consists of a warm chocolate chip cookie served in a skillet, topped with vanilla ice cream, chocolate and caramel sauces, and heath bar pieces — and even included an edible pirate sail.

Soft drinks were included, and adult beverages were available at an additional cost.

Breakfast was served in a similar fashion and is complimentary for all hotel guests.

Our waitress told us that this dining style was always the plan for the property, even before COVID-19. And it's something that I'd love to see in place of buffets moving forward.

Now, it's worth noting that the restaurant is entirely inside, so if you're still avoiding indoor dining in light of the pandemic, it may not be a great option. However, masks were required, the tables were socially-distanced and the ceilings were quite high. And with no buffet line, there was little movement around the room.

We had a terrific stay at Pirate Island Hotel. The location — just steps from the park — is naturally a major appeal of staying there, but there were many other facets of the property that are appealing for families. With wonderfully-appointed standard rooms, an array of kid-friendly services and amenities, and solid dining choices, the hotel should be high on your list if you're planning a trip to Legoland Florida.

And for those Florida purists (like my wife) who remember the days of Cypress Gardens, you'll be thrilled to note that the newest attraction pays direct homage to the park's heyday — delivering a pirate-themed, water-skiing stunt show overlooking beautiful Lake Eloise.