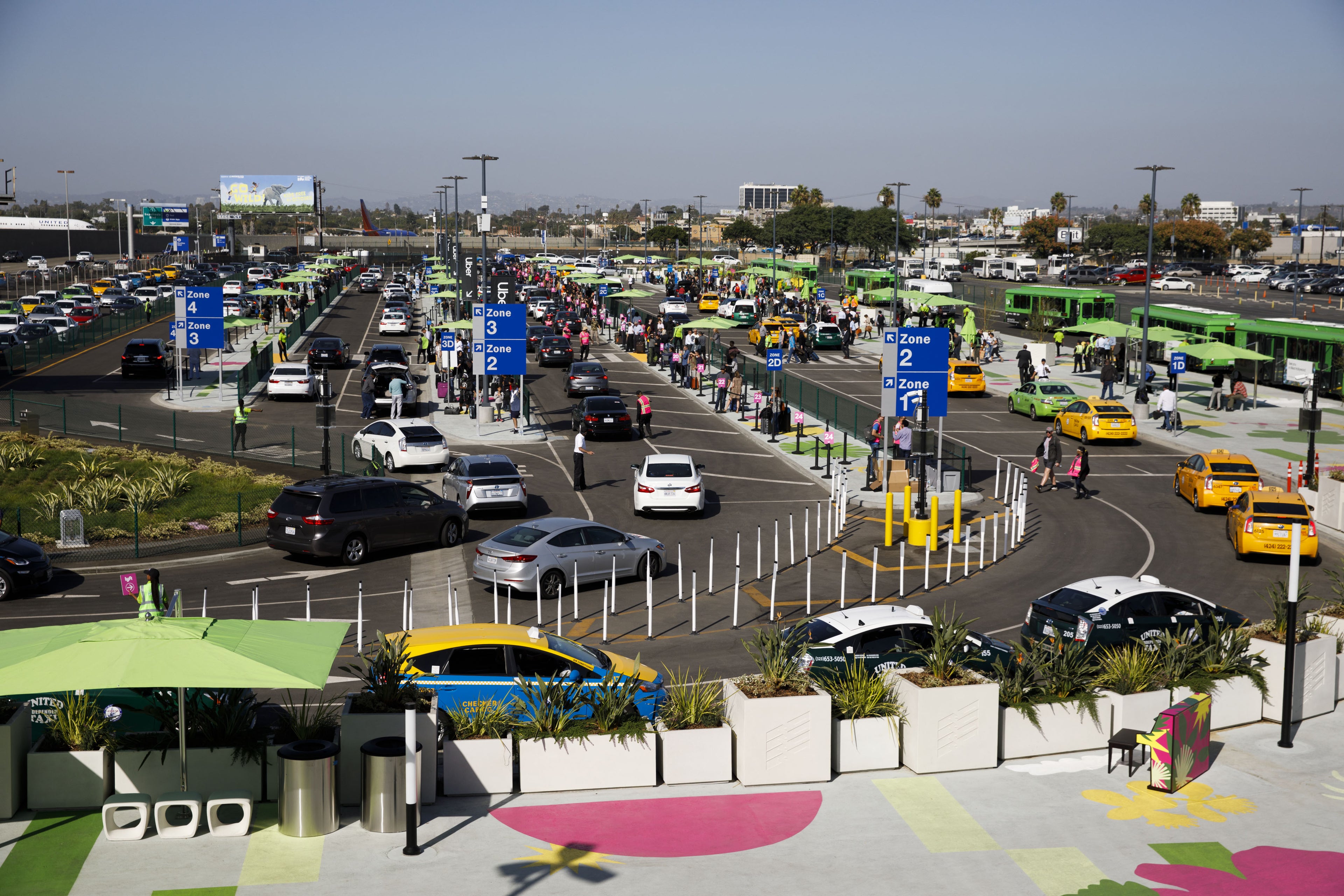 LAX's new taxi, ride-hailing lot 'LAX-it' off to a bumpy start
This post contains references to products from one or more of our advertisers. We may receive compensation when you click on links to those products. Terms apply to the offers listed on this page. For an explanation of our Advertising Policy, visit this page.

Despite a smooth start early in the day, the lot — dubbed "LAX-it" — faced a number of teething pains, including "long waits for shuttles, congestion for shuttles to get to LAX-it, and long wait times for Ubers and Lyfts at the lot," Los Angeles airport (LAX) said in a Tweet late in the evening local time on Tuesday.

LAX promised "additional adjustments" to the LAX-it lot, including "signage, wayfinding, traffic routes, and staffing," to improve the flow and experience for passengers.

Despite the issues travelers faced with the LAX-it lot, which is adjacent to Terminal One at the airport, the goal — to reduce traffic on the roads in front of LAX's eight terminals — succeeded. Travel time around the terminal area "horseshoe," as it is known, on the upper level roadway fell by roughly half, and on the lower level by about 15%, reported the Los Angeles Times.

Taxis and ride-hailing services continue to drop departing passengers off in front of their respective terminal. And not all traveler pickups have moved; for example, black car services like GroundLink continue to pick passengers up from the terminal curb front.

Keith Wilschetz, deputy executive director of operations and emergency management at Los Angeles World Airports (LAWA), the operator of LAX, told TPG earlier in October that on the worst days it can take vehicles up to 45 minutes to enter and exit the airport terminal area.

Other airports that have moved ride-hailing pick ups away from terminal curbsides have also faced initial challenges. When San Francisco International Airport (SFO) moved Lyft and Uber pick ups to a dedicated area in a parking garage, the airport also saw initial issues with congestion, prompting complaints and frustration among travelers and drivers alike. SFO was able to rectify these issues by opening a second entrance to the pick-up area, as well as a secondary waiting area, for drivers.

LAX shuttle buses, including those to the LAX-it lot and regional services like the FlyAway, appear to have benefited from the move. Los Angeles Times reporter Laura Nelson tweeted she had never seen the inner lanes where buses pick up as empty as they were on Tuesday.

Other travelers, seeing the delays faced by those using the LAX-it lot, touted the benefits of taking the FlyAway bus to those waiting. The buses, in addition to the new dedicated lanes at the airport, can drive in the network of carpool and toll lanes on the Los Angeles area's freeways, bypassing traffic in many places.

Related: LAX Counts Down to Midfield Concourse Opening in 2020

Part of the roadway congestion at LAX comes from the boom in air traffic in recent years. Passenger numbers jumped nearly a quarter over five years to 85.9 million in 2018, according to U.S. Department of Transportation data via Diio by Cirium. Last year alone, passenger traffic rose 3.5% year-over-year.

Airlines have fueled the dramatic growth at LAX by both establishing and growing hubs at the airport. Delta Air Lines, a small player at the airport when it merged with Northwest Airlines in 2008, established and grew a hub, while Alaska Airlines, American Airlines and United Airlines have all beefed up their schedules with new flights and destinations.