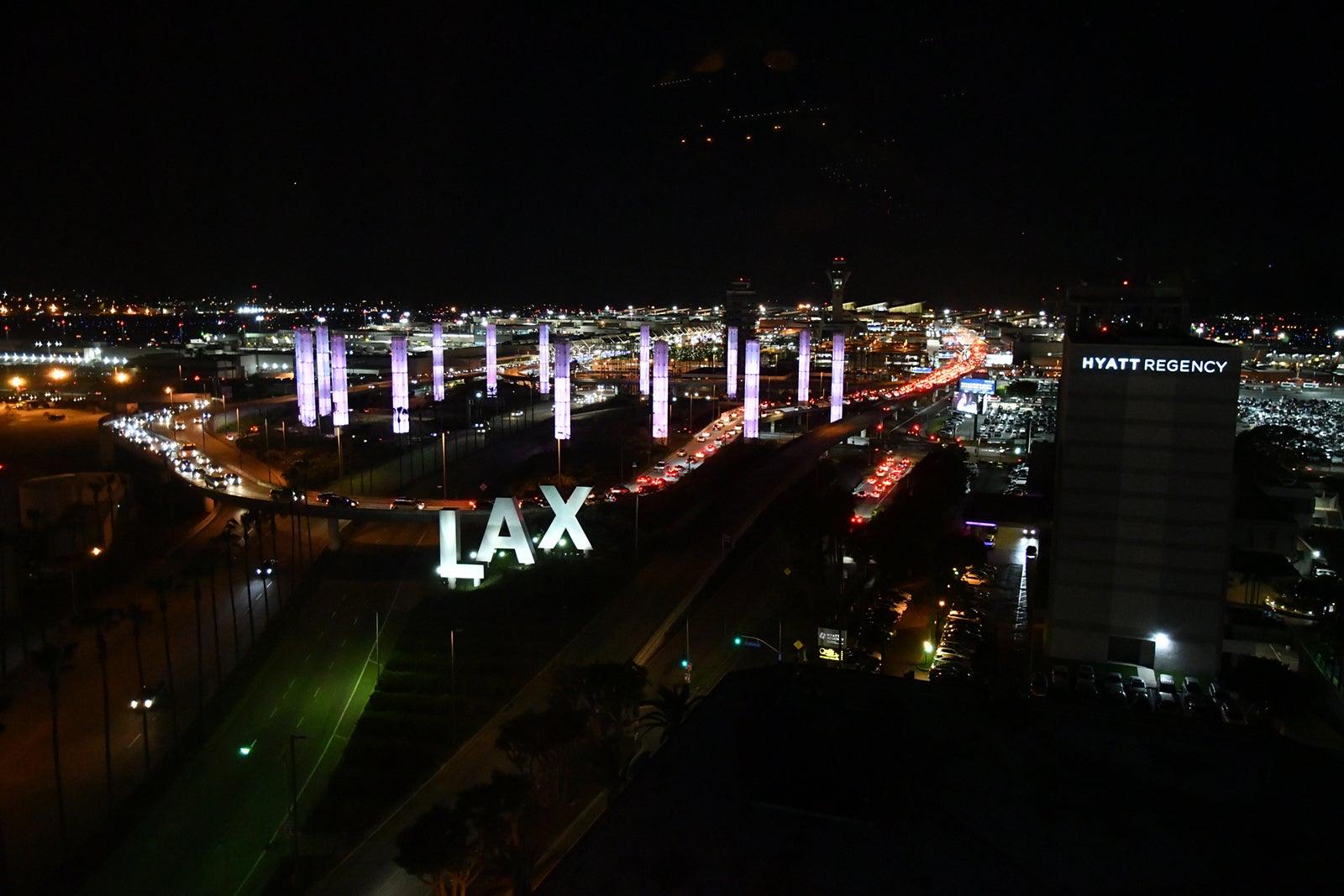 LAX to end curbside pickup for taxi, ride-hailing passengers
This post contains references to products from one or more of our advertisers. We may receive compensation when you click on links to those products. Terms apply to the offers listed on this page. For an explanation of our Advertising Policy, visit this page.

Los Angeles is the latest airport to move taxi and ride-hailing pickups away from the terminal curbside in an effort to fight congestion.

Beginning Oct. 29, all taxi, Lyft, Uber and other ride-hailing pickups will move to the new "LAX-it" lot, a dedicated pickup space adjacent to Terminal 1 at the airport. Passengers will have the choice between taking a dedicated shuttle bus from the arrivals level of each terminal, or walking to the new lot to catch their rides.

The new LAX-it lot will feature food trucks, charging stations and restrooms for travelers while they wait for their rides, a presentation by LAX operator Los Angeles World Airports (LAWA) showed.

Passengers arriving at LAX by taxi, Lyft or Uber will still be dropped off at the curbside in front of their respective terminal.

LAX hopes the move will combat worsening congestion on the roadways leading to and within LAX's Central Terminal Area, as well as improve the travel experience, LAWA deputy executive director of operations and emergency management Keith Wilschetz told TPG.

"If you look at the time it takes when you order your [ride-hailing] vehicle until you get out of the Central Terminal Area mess, it’s better with this system," he said. By LAWA's estimate, a 30- to 35-minute trip leaving LAX could be reduced to as little as 20 minutes with the new LAX-it lot.

The move is also viewed as just a temporary measure until LAX's new Automated People Mover, including a new transportation center east of the terminals, opens in 2023. Asked if taxi and ride-hailing pickups will move back to the terminal curbside at that time, Wilschetz said no decision has been made.

Related: LAX Counts Down to Midfield Concourse Opening in 2020

LAX is just the latest airport to move some pickups away from terminals. The combination of rising traveler numbers — a record one billion passengers passed through U.S. airports last year according to the Department of Transportation — and more people using ride-hailing services to or from the airport has seen congestion spike.

On the worst traffic days, it can take a vehicle up to 45 minutes to get into and around the Central Terminal Area at LAX, said Wilschetz.

“Many airports across the United States are experiencing increased congestion at the curb because of new and emerging shifts in how people get to and from the airport," said Airports Council International-North America (ACI-NA) spokesman Scott Elmore.

San Francisco (SFO) moved all rideshare pick ups to its central parking garage from the curb in June. One traveler, speaking about the move with the The New York Times in August, said the change "made catching a ride more efficient, though it does involve a longer walk from the gate."

Boston Logan (BOS), Nashville (BNA) and New York LaGuardia (LGA) are among other airports that have made similar changes to at least ride-hailing pickups.

The pickup changes planned by LAX do not come without criticism. Many are flagging the fact that most travelers will need to take a shuttle bus to the lot, whereas other airports that have made similar changes moved pickups in centralized areas that are walkable from their terminal buildings.

Wilschetz, responding to the criticism of LAX's plan, said new roadway restrictions that go into effect on Oct. 29 will make the buses quicker and more efficient. On the arrivals level, the two interior lanes closest to the terminal will be dedicated just to buses, with all other vehicles relegated to the outer lanes. This change is expected to speed the new LAX-it shuttles.

In addition, each shuttle will make only up to two stops before returning to the LAX-it lot, added Wilschetz.

Passengers also have the option of walking to the new taxi and ride-hailing pickup area. LAWA estimates the walk is as short as three minutes from Southwest Airlines' home in Terminal 1, to up to 19 minutes from American Airlines' Terminal 4.

Travelers in need of extra assistance, for example those in wheelchairs, will have to meet their taxi or ride-hailing pickup at the LAX-it lot, said Wilschetz. However, every shuttle bus will be fully compliant with the American with Disabilities Act (ADA) and, for those who do not want to share the shuttle, dedicated ADA shuttles will be available upon request, he added.

LAX is in the midst of a major building spree that will see much of the terminal area change over the next decade. In addition to the people mover, a new midfield concourse will open west of the Tom Bradley International Terminal next year; renovations and expansions of Terminals 1, 2, 3, 4 and 5 are underway; and the airport is studying the possibility of a new Concourse 0 and Terminal 9 east of the existing complex.

Related: Get the latest aviation news delivered right to your in-box with the TPG newsletter