Articles
Max Prosperi is a part-time frequent flyer and travel writer and full-time student. Based in St. Louis, Missouri, Max covers a variety of topics with a focus on points, miles, and aviation.
Follow
July 21, 2019
•
4 min read 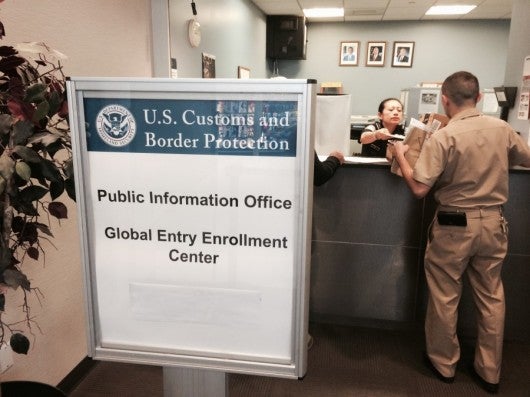 LAX Global Entry Enrollment Office Closed as CBP Officers Sent to US-Mexico Border
This post contains references to products from one or more of our advertisers. We may receive compensation when you click on links to those products. Terms apply to the offers listed on this page. For an explanation of our Advertising Policy, visit this page.

Global Entry applicants hoping to schedule an interview at the Los Angeles International Airport (LAX) enrollment center will have to wait till at least September 30. The Los Angeles Times is reporting that the office is closed indefinitely after US Customs and Border Patrol (CBP) agents at the office were reassigned to the United States-Mexico border.

A representative from CBP told The Los Angeles Times that the LAX office is closed due to a staff shortage as a result of the "humanitarian and security crisis on our southwest border."

In recent years, the US-Mexico border has become inundated with an influx of migrants and refugees hoping to enter the United States, often illegally. The influx of illegal migration has led to a humanitarian crisis at the United States' southern border with migrant detention centers filled beyond capacity.

With Democratic and Republican leaders gridlocked over how to address the immigration crisis at US-Mexico border, detained migrants and refugees continue to fill detention centers. These detention centers are often understaffed, NBC News reports. To assist in the on-going immigration crisis, officers at the LAX Global Entry enrollment center have been temporarily reassigned to the border.

According to The Los Angeles Times, the Global Entry enrollment center at Los Angeles International Airport closed its doors to applicants on June 23.

In a statement to The LA Times, a CBP spokesperson noted that applicants should receive a notification that their appointments at the LAX enrollment center are canceled.

The Points Guy's JT Genter spoke with a CBP agent at Los Angeles International Airport on July 21. The agent informed Genter that the LAX Global Entry enrollment center would remain closed through the end of the fiscal year, which ends on September 30.

This isn't the first time CBP has reassigned staff to the southern border. Reports of Global Entry interviews being canceled as a result of officer reassignments were first reported in June.

Global Entry is a program offered by United States Custom and Border Patrol, the law enforcement agency of The Department of Homeland Security. Global Entry is designed to allow trusted travelers to receive expedited processing upon entry into the United States. Applicants first undergo a rigorous background check. Applicants who receive conditional approval must then visit an enrollment center for an interview with a CBP officer.

US Customs and Border Patrol operates Global Entry enrollment centers in 40 US states, Puerto Rico, Guam, and at select airports in Canada and Qatar.

Conditionally approved Global Entry applicants who are impacted by the LAX enrollment center's closure may be able to reschedule an interview at a nearby enrollment center about a 6- to 8-minute drive from LAX. Other enrollment centers near Los Angeles International Airport include: