Articles
Benji Stawski is a former reporter for the site, covering all things points, miles, credit cards, travel and aviation.
May 21, 2021
•
9 min read 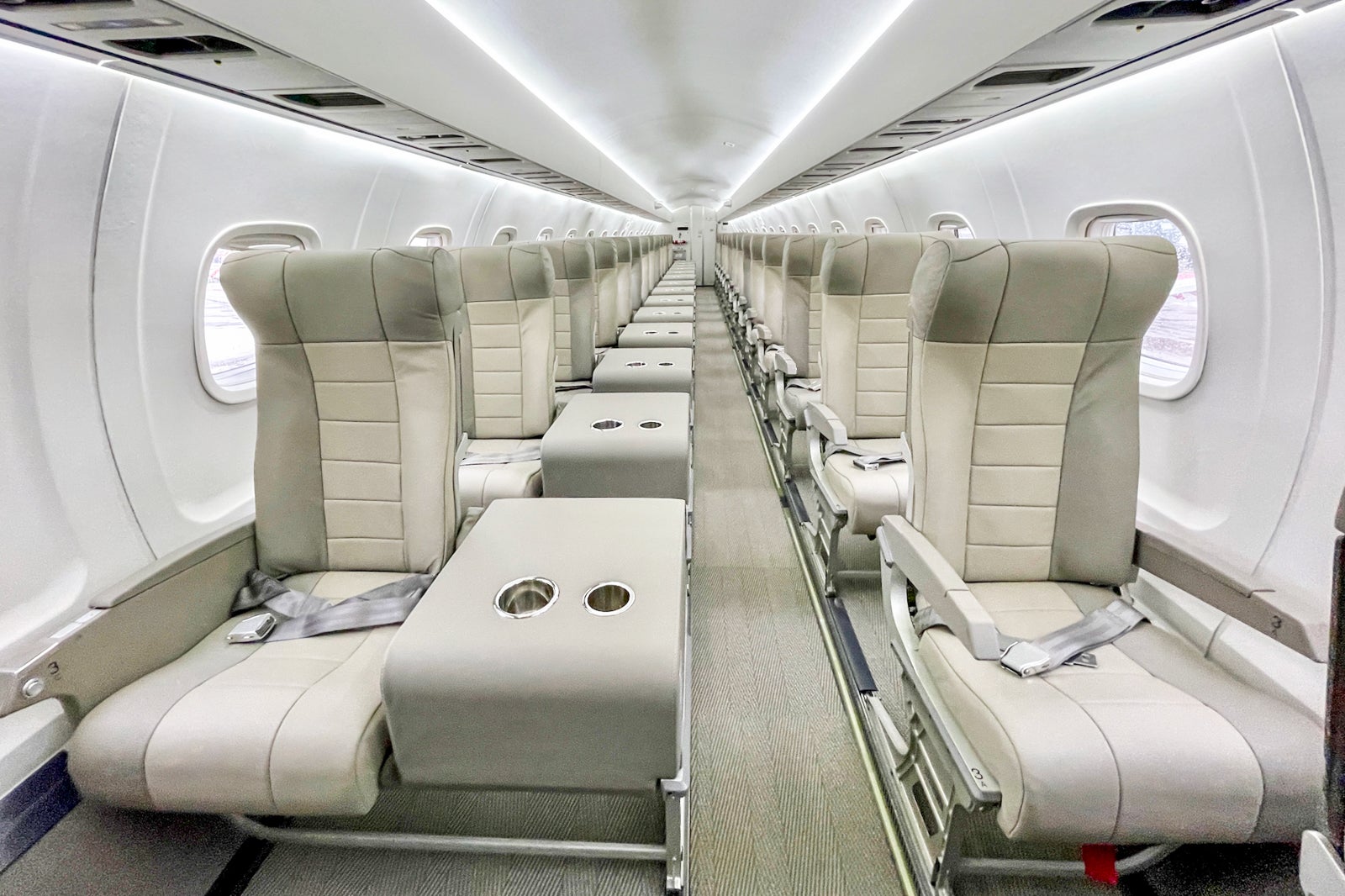 Editor’s note: JSX provided behind-the-scenes access and a complimentary flight to TPG. The opinions expressed below are entirely from the author and weren’t subject to review by JSX or any external entity.

JSX has always offered a unique flying experience. It operates flights from private terminals and every plane has just 30 seats.

Since launching in 2016, the airline has offered just one kind of configuration on its jets: a single-class cabin with a 1-2 seating arrangement. There've always been power outlets in each row and at least 36 inches of legroom, well above the industry average. However, the airline used the downtime caused by the pandemic to accelerate the launch of an even more comfortable configuration.

Late last year, JSX began taking delivery of planes featuring a 1-1 layout. In other words, every seat is now both an aisle and window seat. The airline is still using the same plane types as before and didn't adjust the total seat count. Rather, it was able to make use of a large gap that was between the last row and the restroom.

The airline recently invited us to tour its planes and see the new seats first-hand. Here's what I learned.

Before we start, let's review how you can even fly this special jet.

The 1-1 configuration is only available on JSX's Embraer E145 aircraft. It's not offered on the E135s since those planes are smaller and didn't have the same gap at the back.

For simplicity's sake, JSX currently flies its 1-1 configured E145s exclusively on intra-Texas routes — unless there's a one-off flight. That said, moving forward, all newly delivered aircraft will sport the new interior, so we'll likely start to see it on other routes in the future.

While there are more planes on order, the airline's co-founder and CEO Alex Wilcox shared with us that it's focusing on E145s for now — it currently doesn't have plans to introduce new aircraft types to its fleet.

JSX has been exploring ways to take advantage of the unused space at the back of its E145s for a while now. "More space was always the plan," Wilcox told us. However, the pandemic and need for social distancing forced the airline to think faster.

Ultimately, the airline decided to go with an iteration of its existing product. This helped the airline get Federal Aviation Administration (FAA) certification faster and complete the design project in just two months — an impressive feat in the aviation world.

The new cabin has 30 seats arranged in a 1-1 configuration across 16 rows (the first two rows have one seat each). There are no overhead bins to give a more spacious feel. For comparison's sake, most commercial airlines usually squeeze around 40-50 seats on these planes.

In case you couldn't tell, the bones of the cabin haven't really changed. The big difference is that the aisle seats on the starboard side of the plane have been replaced with leather-covered cocktail tables and armrests, allowing for more personal space.

While the airline could've opted for wider seats, it would've taken a lot longer to get FAA approval.

All seats offer at least 34 inches of legroom and a comfortable recline.

You could potentially get a little more space by selecting a seat in the emergency exit row or the starboard bulkhead (seat 3C). Meanwhile, the port side bulkhead (seat 1A) looked a bit tighter. Still, personally, I'd try to avoid both bulkhead seats due to the inability to fully stretch your legs.

As before, the seats are upholstered in grey leather and the tray tables have wood trim, adding a more luxurious feel to the cabin.

Above each seat is a light, call button and a personal air nozzle. Each seat also had its own power outlet. JSX has plans to roll out fleet-wide Wi-Fi, but that won’t be available until the end of 2022.

The plane is equipped with one lavatory. While it doesn't feature an onboard shower, it’s a bit more premium than the average airplane bathroom.

The biggest differentiator between JSX and most airlines is that flights operate from private terminals. This allows you to arrive at the airport just 20 minutes before the flight and skip potentially crowded terminals and security lines.

Due to the pandemic, JSX heightened its safety protocols via its “Simpli-Fly” program. One way it's combating the spread of COVID-19 is by using AI-based thermal scanning to detect elevated body temperatures. Other features of the program include increased aircraft and lounge sterilization, advanced air circulation and contactless security that doesn’t require you to take your shoes off or put your stuff in bins.

Onboard, all guests are offered a selection of complimentary snacks, beer, wine, spirits, mixers and soft drinks.

With JSX starting to operate some longer routes, we asked Wilcox if it would consider installing ovens on its planes so it can serve hot meals on these flights. We were told that for simplicity's sake, the answer is currently no. However, if it did start regularly operating longer flights, it might consider pre-selling meals that you can pick up at the airport before your flight.

Fares start at $89 and include at least two checked bags. While standard "Hop on" fares charge a fee to select a seat, there's no extra charge for a seat with a cocktail table or one in the emergency exit row. Free seat selection is available when you book "All in" fares.

Thanks to a frequent-flyer partnership with JetBlue, you can earn 150 to 250 TrueBlue points on your JSX flights. While there's currently no way to redeem miles, Wilcox told us that JSX's own loyalty program is coming. Wilcox was tight-lipped about what the program will look like but said that TPG readers and other frequent flyers will appreciate it.

JSX is as close to flying private as it gets without paying an exorbitant amount. The new 1-1 configuration is a terrific addition to its fleet and blows comparable regional jets out of the water. Obviously, the starboard seats with the cocktail tables attached are more desirable. However, there's truly no bad seat on this plane. Each seat offers generous legroom and you'll never have a seatmate. I can't wait until JSX installs this product on more jets and, one day, hopefully, expands service to the Northeast.