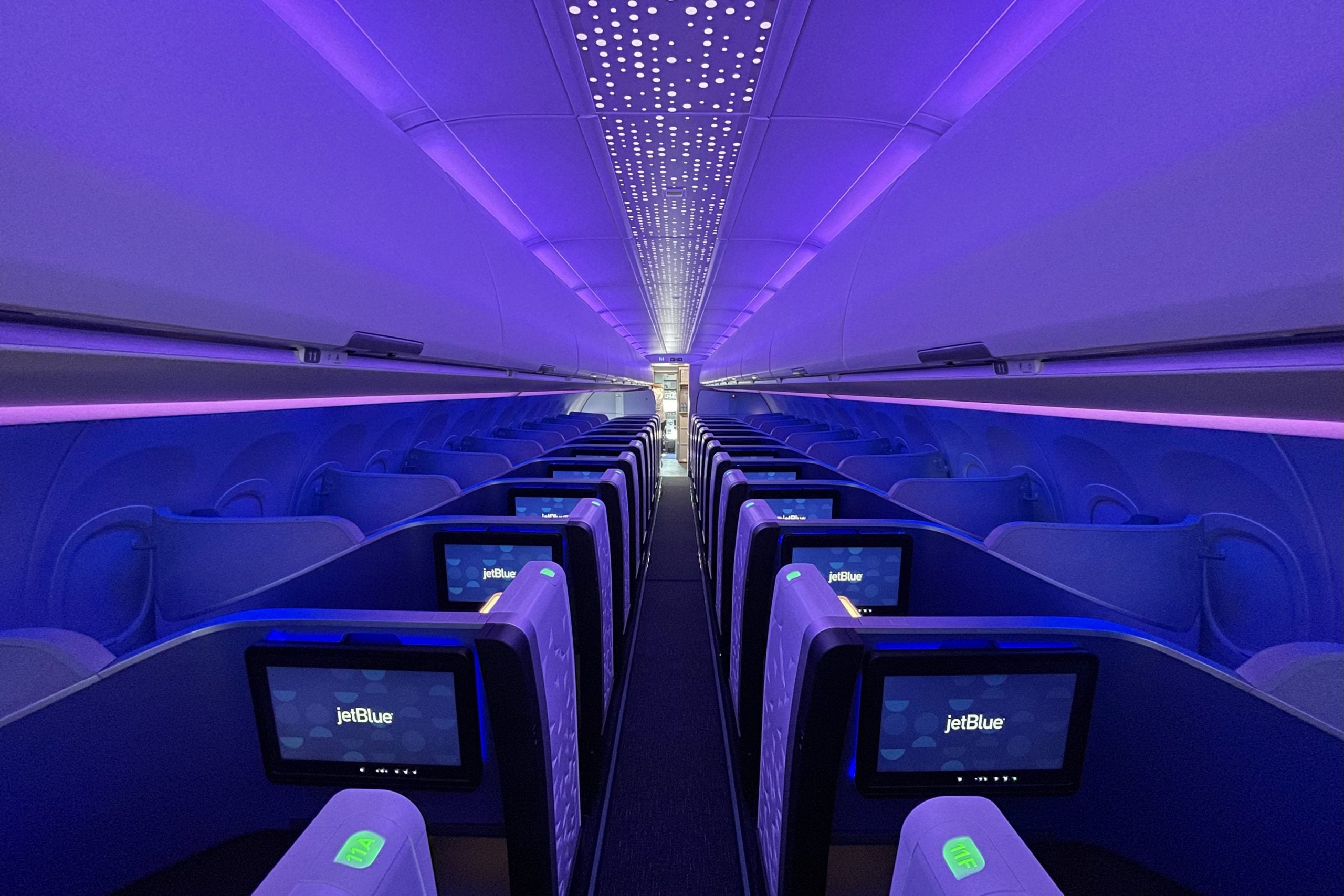 The blankets and amenity kits that appear in the economy photos below do not represent the products that JetBlue intends to offer on its upcoming London flights.)

Come Aug. 11, 2021, travelers will have a posh new option for flights across the Atlantic.

On that date, JetBlue is planning to begin flying nonstop between New York-JFK and London Heathrow (LHR), with an ultra-premium plane offering a grand total of just 138 seats. Service to London's Gatwick Airport (LGW) will follow, launching on Sept. 29.

Compared with many of the other planes flying on this route — American Airlines often runs a Boeing 777-300ER with 300-plus seats — JetBlue's Airbus A321LR almost feels quaint.

Related: How JetBlue’s first A321LR stacks up against the Mint-equipped neo

Still, with JetBlue's latest products throughout, the airline is able to offer a top-notch experience, made even more luxurious by boosted service, ranging from custom bedding in business class to upgraded economy meals.

While you're likely to have a great experience throughout the plane, as always, some seats offer a more comfortable ride than others. Whether you're booked in Mint business class or snagging a spot in coach, I'll show you which seats to pick.

JetBlue's A321LR sports 12 rows of business class, with all suites arranged in a 1-1 configuration. That means you'll be guaranteed a direct window view plus easy access to the aisle, regardless of where you choose to sit.

All suites also include a sliding door — while it isn't quite as high as you'll find with some products, such as Qatar's Qsuite business class, when the door is closed, you'll have a bit more privacy, and separation from the aisle.

As I mentioned, there are 12 rows of suites in business class, starting with 1A on the port side and 1F across the aisle.

Just like on the A321neo, suites in the first row are branded as JetBlue Studios, with considerably more space to stretch out, a large 22-inch screen and a buddy seat for a friend to join you for a chat or chew.

Studios require an additional payment of $299 each way, though in some cases, it could be worth the extra expense. If you don't mind the fee, the studios at 1A and 1F would definitely be my first pick. Just note that since they're located at the front of the cabin, light and noise from the galley and lavatories may be an issue.

From there, I'd move from the front of the cabin to the back. With 12 rows of suites, I'd expect it to take a bit more time for flight attendants to reach the back rows, and passengers seated closer to the front are more likely to get their first pick of meals.

Ultimately, window placement is the most significant differentiator. Aside from the studios in Row 1, which include two well-placed windows, I prefer the positioning in rows 2, 3, 5, 6, 8, 9, 11 and 12.

If you're seated in rows 4, 7 or 10, you'll still have partial views through two windows — you may just need to tilt your head slightly to have a look outside.

In general, the farther back you sit, the less likely you are to get your first choice of dishes. In many cases, passengers are also served their meals from the front of the cabin to the back — with flyers hoping to catch some shut-eye on short redeye flights to London, every minute counts.

For those reasons, I'd avoid sitting too far back, since you could end up disappointed, or waiting quite a while for your meal. While there's likely to be more aisle traffic closer to the front of the plane, as flight attendants pass by your seat to serve flyers seated behind, you can close your door to minimize the impact.

Meanwhile, if you see 12A appear as available for any reason, you'll definitely want to avoid selecting it — this particular suite has been designated as a pilot crew rest, and if you're able to snag a spot there, you'll almost certainly end up getting moved.

(Editor's note: The blankets and amenity kits that appear in the economy photos below do not represent the products that JetBlue intends to offer on its upcoming London flights.)

'Even More Space' passengers can expect to find up to six inches of additional legroom. These seats also come with Group A boarding, and expedited security, where available.

'Even More Space' seats in Row 14 offer, well, even more space. Positioned at the second exit row, you won't have to worry about passengers seated in front reclining into your lap.

On flights between New York and London, expect to pay an additional $139 for window or aisle seats in Row 14, and $129 for the middle — there's a caveat to note at the window, though, as I'll explain below.

After that, I'd select any of the window or aisle seats in rows 15, 16 or 17, which all come along with a $129 price tag on flights between New York and London.

Middle seats — obviously, unless you're traveling with friends or family or okay with being squished between two strangers.

If you tend to use the armrest, I might also avoid the window seats in Row 14 — because they're next to the exit, you won't have a proper armrest, which could end up being a bit uncomfortable on longer flights.

Just 24 of JetBlue's economy seats fall into the 'Even More Space' category — the remaining 90 are branded as 'Core,' the carrier's standard coach product.

There's also a 10.1-inch HD touchscreen at each seat, loaded with on-demand entertainment and live TV.

JetBlue's A321LR cabin is remarkably consistent, with at least one window at every row.

With the exception of rows 22 and 23, which I'll detail in the section below, I'd choose aisle or window economy seats in any row, with a slight preference for seats closer to the front of the cabin, since you're likely to end up getting served earlier in the flight. You'll also encounter less traffic in the aisles, since the snack bar and lavatories are located at the rear of the cabin.

I'm also very curious to see if passengers like flying in Row 13, at the very front of the economy cabin. Bags need to go in the overhead bin for takeoff and landing, but these seats offer a bit more personal space, since they're at the bulkhead.

It's a mixed bag, though — the armrests are fixed and you can't recline, given that the second exit row is just behind.

Rows 22 and 23 have missing or misaligned windows, so you might want to avoid sitting there, especially if you're next to the window. I'd also avoid middle seats in any row — labeled as "B" and "E" on this plane.

Finally, I'd avoid sitting in the last rows, since passengers may gather there to access the lavatories and snack bar, which are all located just behind Row 31. Note that the A, B and C seats in Row 31 are reserved as a flight attendant crew rest, so it may not even be possible to select that row.

Wide-body aircraft are a more common sight on flights across the Atlantic, and with two aisles, higher ceilings and a more spacious feel, there are some clear advantages to flying on a larger plane.

That said, with flight times of between six and seven hours — or even shorter on JetBlue's upcoming flights from Boston (BOS) — these transatlantic hops are barely longer than a trip across the country, which most flyers wouldn't hesitate to book on a narrow-body jet.

It's also important to note that this is not your typical narrow-body plane. It's the first single-aisle Airbus to feature the company's special 'Airspace cabin,' offering fancy lighting and modern design elements.

Pair that fresh cabin with speedy WiFi, bigger seats and seat-back entertainment throughout, and you'll barely notice that you aren't crossing the Atlantic on a wide-body jet.