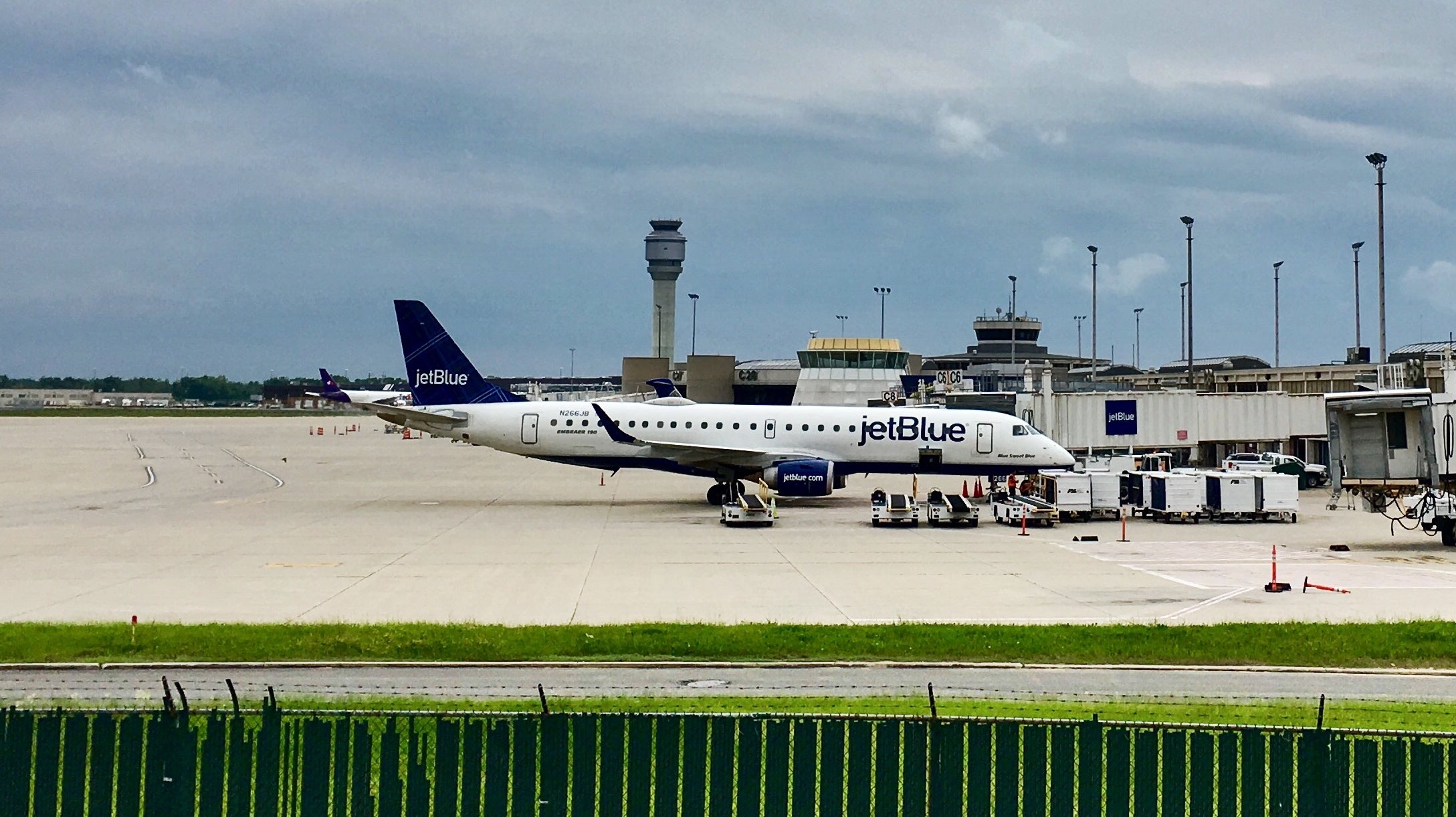 JetBlue Shrinks DC Route Map, Drops 2 Other Cities
This post contains references to products from one or more of our advertisers. We may receive compensation when you click on links to those products. Terms apply to the offers listed on this page. For an explanation of our Advertising Policy, visit this page.

JetBlue will drop two more destinations from Washington's Reagan National Airport as it increasingly focuses on flying to its core markets. The airline also plans to end all flights to two other airports: Anchorage, Alaska, and La Romana in the Dominican Republic.

Getting the axe from Washington National (DCA) will be JetBlue's nonstop routes to Charleston (CHS), South Carolina, and Jacksonville (JAX), Florida. Service from those two cities will end Oct. 26, reports Paxex.aero and confirmed by spokesman Philip Stewart.

JetBlue will use the four slot pairs at National airport to add one additional daily flight to its existing schedules between and Boston (BOS) and the Florida cities of Fort Lauderdale (FLL), Fort Myers (RSW) and West Palm Beach (PBI).

“JetBlue continuously reviews its route network in order to ensure that it is optimizing capacity and route frequencies to each market’s needs,” says Stewart.

Charleston and Jacksonville join a growing list of destinations dropped by JetBlue at the close-in Washington D.C. airport, as it focuses more on flying to its Boston hub and to its focus cities in Fort Lauderdale and Orlando

In February, JetBlue announced plans to boost Boston service to hourly with 14 flights a day from Washington. The upgrade of the Boston schedule came at the expense of JetBlue's routes to Hartford (BDL), Connecticut, and Tampa (TPA), which both will end in July.

The airline also ended service to Washington Dulles (IAD) in January. That airport had been among JetBlue's earliest destinations, added back in 2001.

JetBlue added flights to Charleston, Hartford and Jacksonville from Washington National in 2014, after acquiring slots at the capacity-controlled airport from American Airlines and US Airways as a condition of their merger.

Related: How to Redeem Points With the JetBlue TrueBlue Program

In addition to the Washington National adjustments, JetBlue will end all service to Anchorage (ANC) and La Romana (LRM). JetBlue's seasonal service between Anchorage and Portland (PDX), Oregon, and Seattle (SEA) will not resume after its scheduled end on Sept. 15. La Romana service will be discontinued on Jan. 10.

The carrier also will axe its nonstop service between New York JFK and Charlotte (CLT), dropping the route on Oct. 26. At the same time, JetBlue will increase its existing service to Charlotte from its hub in Boston.

JetBlue announced on June 27 that it will shift its Houston service to Intercontinental (IAH) from Hobby (HOU) in October. It will also add new service from JFK to San Jose (SJO), Costa Rica, in November, and Guadeloupe (PTP) in February 2020.

The airline, which plans to grow capacity by 4.5-6.5% this year, previously announced plans to begin Guayaquil (GYE), Ecuador, flights from JFK in December.