12 of the Most Instagrammable Places in Tokyo 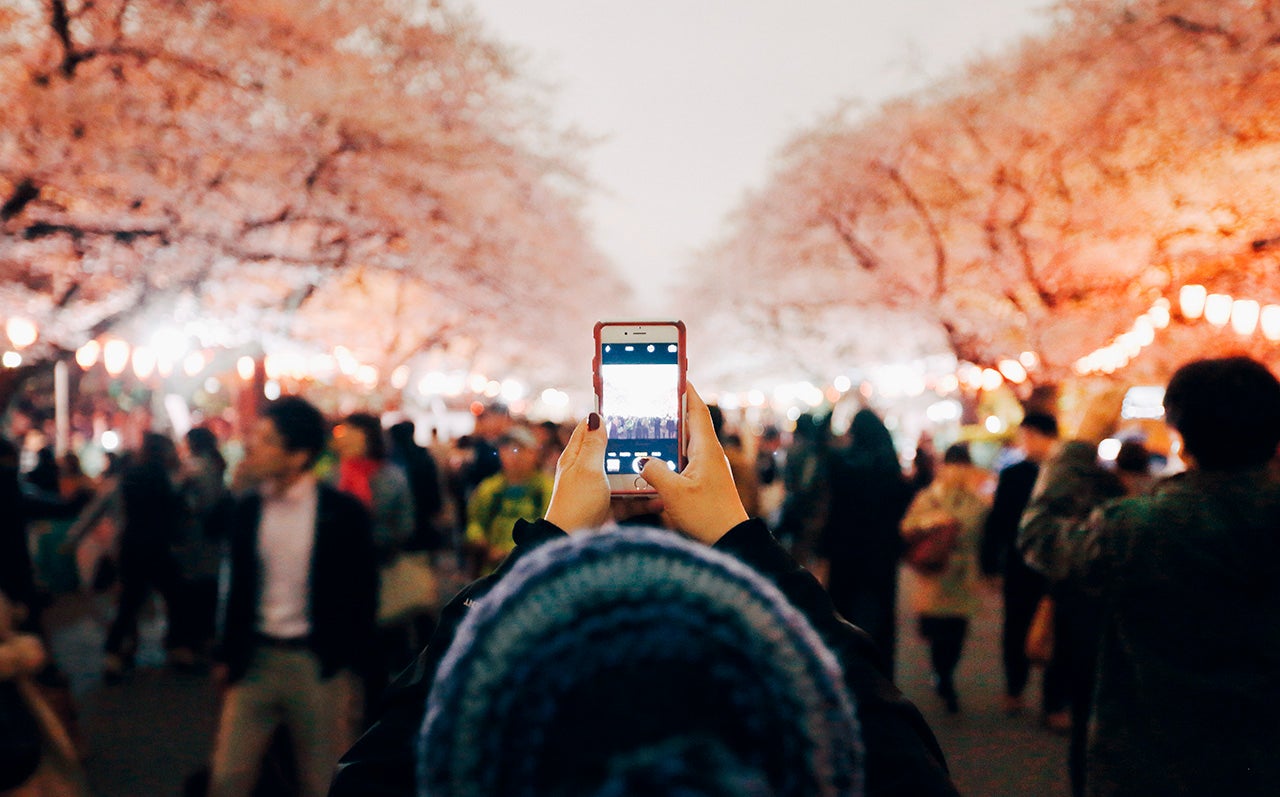 Tokyo is a massive metropolis with many corners to explore. But with its array of parks, frenetic markets and ancient shrines in stark contrast with gleaming skyscrapers, it can be difficult to know where to begin. To best capture the city's famous, colorful cuisine and distinct aesthetic, grab your camera and head to these iconic — and seriously photogenic — Tokyo spots.

Located next to Harajuku Station, the Meiji Shrine is a quiet respite for overwhelmed travelers. Originally built and dedicated in 1920, this shrine exalts the spirits of the Emperor Meiji and Empress Shoken. Millions of visitors flock here to participate in the first prayers of the New Year — so if you’re visiting during that time, be prepared for crowds.

Sensō-ji Temple is a five-story Buddhist temple located in the Asakusa district of Tokyo. According to legend, two brothers retrieved a statue of Kannon, goddess of mercy, from a nearby river, which they returned to the waters. Yet the statue came back to them. The temple was built shortly after in the 7th century, and remains Tokyo’s oldest temple.

Originally a part of the Kaneiji Temple, Ueno Park is now a beautiful green space that has been open since 1873. A variety of museums are accessible from the grounds, including the Tokyo National Museum, the Museum of Western Art, Ueno Zoo and the National Science Museum. Visit between late March and early April to photograph the park's 1,000-plus cherry trees in bloom during cherry blossom season.

Clearly modeled after the Eiffel Tower, this building is the second-tallest structure in Japan, standing more than 1,090 feet above the Shibakoen district of Minato. Originally constructed as a communications tower, Tokyo Tower also has an observation deck from where you can capture panoramic views of the skyline. But the tower is also an arresting sight. Swing by in the evening to admire (and Instagram) the illuminated structure.

Considered the world’s busiest intersection, Shibuya Crossing (or The Scramble) is an assemblage of crosswalks, flashing lights and hurried commuters. Rumor has it that a great view of The Scramble can be found from the glass-front Starbucks on the second floor of the Q-front building. Just be sure to arrive (and order your coffee) during rush hour to see the most impressive surge of foot traffic.

Designed by Hiroshi Nakamura, the shopping center at Tokyu Plaza Omotesando is every fashion-fiend's dream. One of the most impressive characteristics of the marketplace, however, is the gorgeous mirrored archway. The stairway into the plaza is framed by a faceted collection of mirrors, each one reflecting a distinct streetscape. Visitors can also head up to the sixth floor-terrace to shoot a few photos of the Harajuku district below.

Located in the Odaiba district is the Soho, a 13-story office building with conference and dining rooms, fitness facilities, a top-floor bar, rooftop terrace, and even showers. This is a perfect space to visit if you’re a remote worker, but it’s also fun to explore as a tourist seeking eye-catching Instagrams. Play with contrast to emphasize the vibrant, colorblocked hallways.

Roppongi Hills is one of the largest building development projects in Tokyo, and it's crowned by an impressive 54-story skyscraper. The building, named for the architect Minoru Mori, is home to several corporations including Google Japan, Lenovo, and The Pokémon Company. Visitors, however, can check out the Mori Art Museum on the 53rd floor, and take scenic shots from the observation decks on the 52nd and 54th floors.

If you are traveling during autumn, plan a trip to Rikugien garden. Rikugien, meaning “six poems garden,” is home to miniatures depicting scenes from famous poems. A network of walking paths meander along waterways and rolling hills, and wind around maple trees that turn fiery red and orange in the fall.

This system of six narrow alleyways in the middle of booming Shinjuku is home to a variety of micro bars and boutiques (some of which serve only regulars, and guests of regulars). But if a bar has a menu displayed outside, it's open to all. Drop by in the evening for a plate of barbecue chicken, and snap a few photographs of the streets' glowing neon signs.

Todoroki's lack of landscape design makes it a refreshing, laid-back break from the otherwise orderly city. Bridges and statues adorn the walking paths, and travelers can happily stumble upon hidden tearooms and shrines. Buy a sweet kuzumochi cake from the Setsugetsuka tearoom and set up a picnic while you Instagram the untamed space.

A staggering variety of seafood is sold here — just note that the wholesale area of the market is a place of serious commerce with a strict set of rules. Don’t show up in sandals or high heels, don’t obstruct the traffic or touch anything that isn’t yours, and don’t bring your bags or suitcases inside. Do, however, take advantage of the Instagram-worthy dishes you’ll find on sale in the outdoor market.

Photo of a woman taking a photo of Ueno Park in Tokyo, Japan. (Photo by Tomohiro Ohsumi/Getty Images)

Related stories
Save money with these travel-related offers on your credit cards this month
Use these shopping portal bonuses to earn extra miles this holiday season
Using miles and points to book airline tickets and hotels for others
Maui magnificence: A review of Kaanapali Alii, a Destination by Hyatt Residence
Featured image by Getty Images