Articles
Darren Murph holds a Guinness World Record as the planet's most prolific professional blogger. He's an explorer at heart, having traversed nearly 50 countries and all 50 US states. He's flown over one million miles on Delta alone, and serves as a senior writer at TPG.
Follow
Nov. 30, 2018
•
11 min read 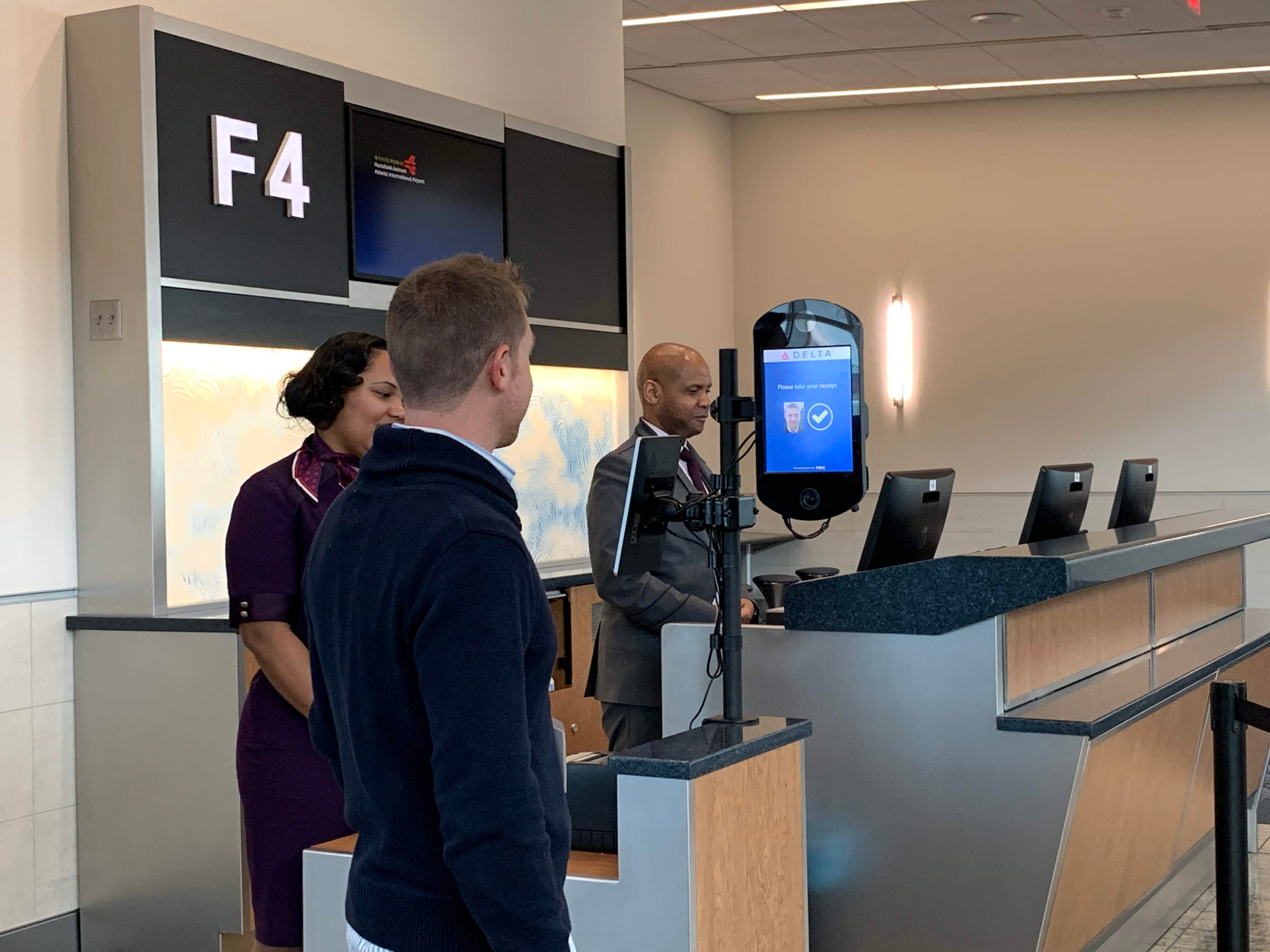 Starting Dec. 1, 2018, passengers flying internationally out of Terminal F at Hartsfield-Jackson Atlanta International Airport (ATL) can use their face to get them from curb to gate, and onto the plane. Delta announced the news just over two months ago, and I traveled to the airline's home turf to experience the future of boarding just days before it exits trial and enters mass availability.

The effort is a massive, complex one. It involves cooperation from US Customs and Border Protection (CBP), Hartsfield-Jackson Atlanta International Airport (ATL) and the Transportation Security Administration (TSA), not to mention supported SkyTeam partners Aeromexico, Air France-KLM and Virgin Atlantic. I want to share how the process worked in practice, as well as where those various parties see the technology going in the future.

I spoke with Delta's chief operating officer Gil West in the gleaming lobby of Terminal F, where he proclaimed that "if biometric boarding can work here — at the world's busiest airport — Delta is confident we can make it work elsewhere."

He stopped short of putting a definitive timeline on when biometric boarding, which is currently reserved for nonstop international itineraries departing from ATL, would expand, but you can bet that it will. "We've been prototyping this for two years," West said, "and aspirationally we'd like to scale it quickly."

So, you may be wondering exactly what it is. In a nutshell, it's the quickest I've ever checked a bag, scurried through security and boarded a flight.

What It's Like to Navigate an Airport Using Your Face

The process can begin at several points, depending on your travel needs. For those who haven't checked in online or via the Fly Delta app ahead of time, your first touch point will be a kiosk at the departures area in Terminal F. These are gently modified units, equipped with a couple of off-the-shelf Intel RealSense cameras and a fourth check-in option: "Look."

When I tapped the "Look" icon, I was served a yes/no screen related to Delta's privacy policy. Confirming that screen brought up a pane that politely asked me to look at the camera. In a second or two, my identify was confirmed. In the background, the kiosk pings a CBP database using a secure Wi-Fi connection to find a match between your face and your passport photo; Delta confirmed that the photo it takes via the kiosk is then deleted. (As an aside, CBP officials confirmed to me that its Automated Biometric Identification System, or IDENT, database may also include photos of your recent arrivals back into the US, and can sift through several photos if it struggles to match the first one.)

If you've already stored your passport photo in your Delta account, you won't even have to scan your passport at the kiosk. From here, the check-in process is as normal — select how many bags you want to check, print your boarding card and move to a line where your luggage will be weighed and tagged.

I inquired as to whether or not ATL Terminal F would become home to the same kind of self-service, face-scanning baggage drops as seen at Minneapolis-St. Paul International Airport (MSP), but there's no public plan yet to install those.

Once my bag was tagged, it was off to TSA security. Here, you'll see a friendly camera positioned right beside a TSA agent. This was the first point where I was genuinely impressed with the efficiencies gained by using biometrics. I walked up, scanned my boarding pass and barely had to move before the camera detected my face, confirmed my identity, and I was ushered through to place my belongings on the belt.

What's more, Delta and TSA are merely months away from making this step even quicker. The goal is to nix the requirement to show a boarding pass here; starting in early 2019, you'll be able to walk straight up to the camera, smile and head for the security belt. That's a huge win, as this step alone in the boarding process can take 60+ seconds per person due to the fiddling required to present both an ID and a boarding card while keeping your carry-on baggage, children, food and sanity in tow.

Given that I'm always seeking to spend less time getting through security and more time in a Sky Club, I asked TSA officials if ever the biometric security screen would be paired with CLEAR. Currently, CLEAR is seen as an exclusively domestic product, hence the dearth of a CLEAR checkpoint in ATL's Terminal F. If ever that changes, being able to use CLEAR to (theoretically) cut directly to the security belt would be a game-changer in perpetually clogged airports.

Once I was through security, it was off to board my (fictional, sadly) flight to Tokyo. Boarding commenced by zones, as per Delta's standard operating procedures, but with two huge differences: I didn't need a boarding pass, and I didn't need to open my passport.

I simply walked up to the camera (there's two that operate in parallel for boarding, by the way), smiled and walked on. Or, I would have had there been a jet on the other side.

That aircraft holds 124 passengers at maximum capacity, and passengers were alerted ahead of time that this flight supported biometric boarding. Folks were told to simply walk up, face the camera and grab their printed boarding receipt. They were also told that opting out was possible, in which case they'd need to have their boarding card and open passport ready for inspection.

I only saw three people opt out, preferring not to peer at a camera, while everyone else seemed to acclimate to the process with ease. Keep in mind that this was the first time most of these passengers had even heard of biometric boarding, let alone tried it, but the process I witnessed was orderly and quick. Several passengers chuckled and exclaimed things like "Technology these days!," and "Pretty cool!" Overall, folks seemed to feel that the biometric boarding was nifty rather than invasive, likely helped by the fact that it only took 10.8 seconds to board each passenger.

Funny enough, Delta could let you board without ever seeing your passport, but the reason gate agents ask for you to flash your passport prior to boarding is so they can confirm that you don't get stuck at your destination without one. And, while it considered not printing seat receipts for each passenger, it found in testing that many folks would forget their seat assignment and hold up the line once onboard. Technology can solve a lot, but forgetfulness remains a challenge.

What to Do With all That Saved Time?

Delta claims that biometric boarding — just that final step alone — can shave up to nine minutes off of a typical widebody boarding process. When I asked John Selden, general manager of Hartsfield-Jackson airport, if he'd consider adding even more flights should biometrics catch on across all airlines, he didn't seem opposed to the idea. Indeed, shaving nearly one-sixth of an hour from each boarding could create all new possibilities for Delta and the airport as a whole. That's more time to recover from a late inbound aircraft, slow catering, cargo loading snags, etc. Even if it doesn't lead to more flights, it's apt to push the airline's on-time performance a bit higher.

Selden stated that "no other airlines have expressed interest yet" in implementing a similar end-to-end biometric system, but Delta COO Gil West voiced his hope that "Delta will push the entire industry forward in this regard."

All 12 gates in Terminal F are equipped with two cameras per boarding gate (F1 through F10, F12 and F14), while the TSA has six total cameras implemented at security checkpoints. Terminal E, where some of Delta's international flights depart from, is getting with the biometric show a bit more slowly. As of now, only E10 and E12 are actively supporting biometric boarding.

Given that this wasn't even Day 0 for the system, I was duly impressed in how seamless it worked, even when fallbacks were needed. For example, one child boarding the flight to Mexico City had aged a few years since his passport photo was taken, so a match wasn't found. The gate agent took the passport and boarding card from his mother, scanned it and kept the line moving. It served as a good reminder to keep a boarding card handy in the early days of this.

But it also unearthed a reality: I can't envision the entire boarding process, across all airlines and airports, going fully biometric within the next five to 10 years. There's just too much legacy baggage, so to speak, and too many established norms to undo. When asked about global expansion, West wouldn't commit. "We have to work with a number of foreign governments and authorities," he said, inferring that standing up an end-to-end biometric system in other nations will create obstacles specific to each individual case.

If you want to give Delta's new process a whirl, you'll need to start your boarding process at ATL and ensure that you're booked on an international flight departing from Terminal F. In my opinion, this technology has a chance to hit escape velocity if ever it's implemented on the domestic side. That's a bigger challenge than you'd think: Not everyone who flies domestically has a passport, and in turn, does not have a photo stored with CBP that can be referenced. After speaking with West, my impression is that Delta wants this implemented far and wide — those time savings would become tremendously impressive if scaled across its thousands of daily domestic hauls.